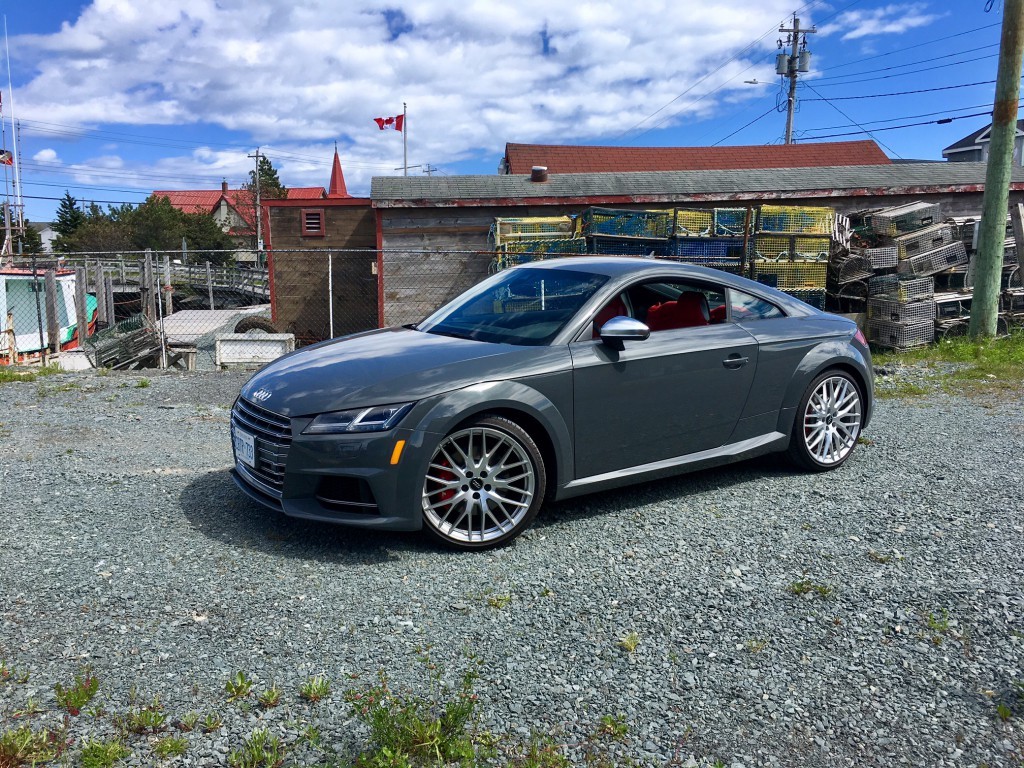 The Audi R8 wasn’t around when I was a kid. Instead, my bedroom wall donned pictures and posters of other European stalwarts such as the Porsche 911 and the Lamborghini Diablo.

Today, the R8 has gained a credible reputation to go along with its supercar styling. I can only assume ten year old girls and boys obsessed with cars ask their parents to buy them R8 posters to go along with the usual suspects.

The idea of putting your automotive idols on your wall as a kid is to remind yourself that one day – some day – you will be old enough to drive one or own one.

Then life hits you and you realize either you aren’t willing to prioritize such large amounts of money on a car, or you don’t own nearly as much cash as you thought you would.

I’ve never driven a 911 before. Today, getting seat time in a Diablo is likely to be nearly impossible, though I did get to sit in a Countach before at least.

Surely, kids of today will come to the same realizations by the time they reach my age. The R8 -even used- will likely be out of reach for most of them.

Enter the 2017 Audi TTS, now into its third generation. And to celebrate three generations of the tiny coupe, Audi has decided to give it R8-like styling. The front end looks decidedly R8 with similar all-LED headlights and grille, along with a low, wide stance. My tester’s optional 20-inch wheels look fantastic. Brilliant. Gorgeous. The curvaceous rear end features four pipes, sequential turn indicators and a rear spoiler that only awakens at higher speeds.

The end result is a car – once panned for its unusual styling – that generates stares of admiration every where it goes. An R8 is certain to draw more attention, but when it comes to gaining real estate on kids’ walls, the TTS is likely to have no trouble.

When parked, the TTS’ exterior style lured people in but it is its interior style that got them to stick around to ask more about it. My tester’s interior featured bright red leather. As one of my colleagues so accurately put it, it looks as if you’ve sat inside a designer purse. The cockpit features a rather nice looking flat-bottomed steering wheel. But at first glance, the TTS seemingly looks a bit spartan inside. That is, until you bring it to life with the push-button start. 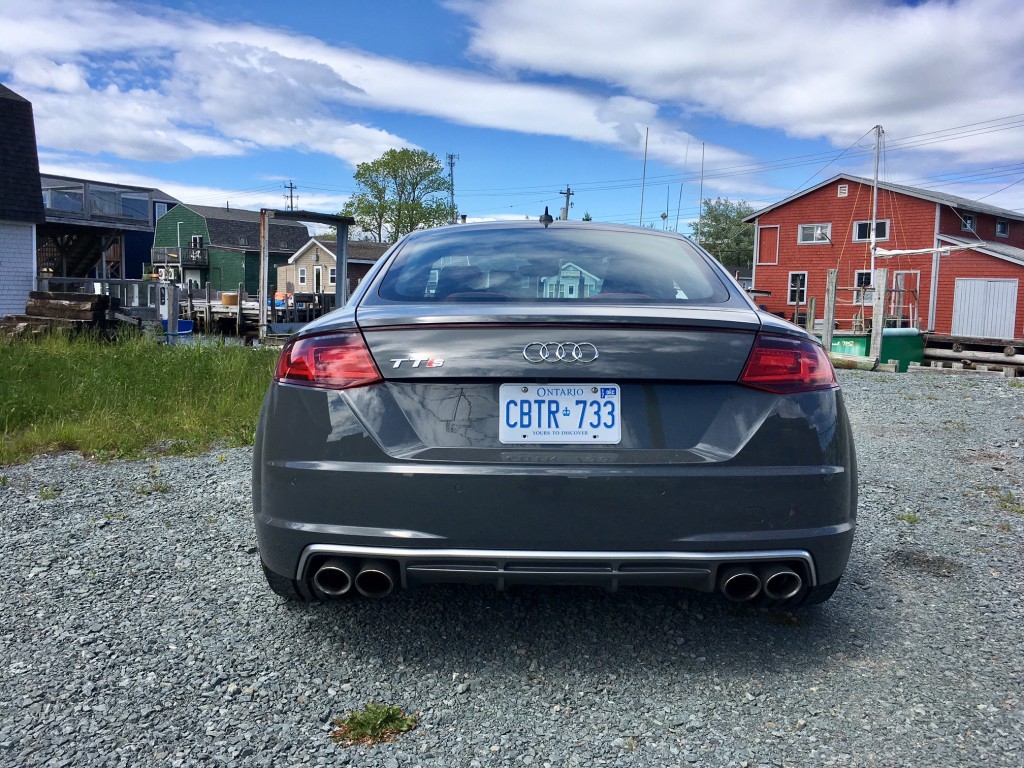 Now, the virtual cockpit reveals itself. Everything you might find on an infotainment screen is now directly in front of you, the driver. This may be annoying to your passenger who may want to control, well, nearly anything. Who cares. Everything is driver centric. The only thing out of place is the volume knob, which doubles as the tuner, and it is placed closer to the passenger and directly behind the gear shift making it difficult to get to.

The vents cleverly house buttons within them such as the climate control (sorry, no dual zone for you), fan speed and heated seats.

Speaking of the seats, they are comfortable and hug you tight to make sure you don’t go anywhere during hard cornering. But getting in and out of the TTS may be an undignified experience if you are a bit more on the portly side, or on the Shaquille O’Neal side. And the rear seats? Forget it. Treat them as a shelf and that’s about the only way they are useful to anyone. Even children won’t be able to fit back there.

During the last couple of days with the TTS, my girlfriend and I took a trip from Halifax, NS all the way up to the confederation bridge, linking the main land to Prince Edward Island. I was a bit worried about the long-term comfort of the TTS and suggested we take her much bigger and much comfier Ford Fusion. She wanted to take the TTS.

“Okay,” I said reluctantly. “But the suspension is tuned for performance so it isn’t going to be the most comfortable ride in the world.”

She assured me she would be fine. And to my surprise, she was. 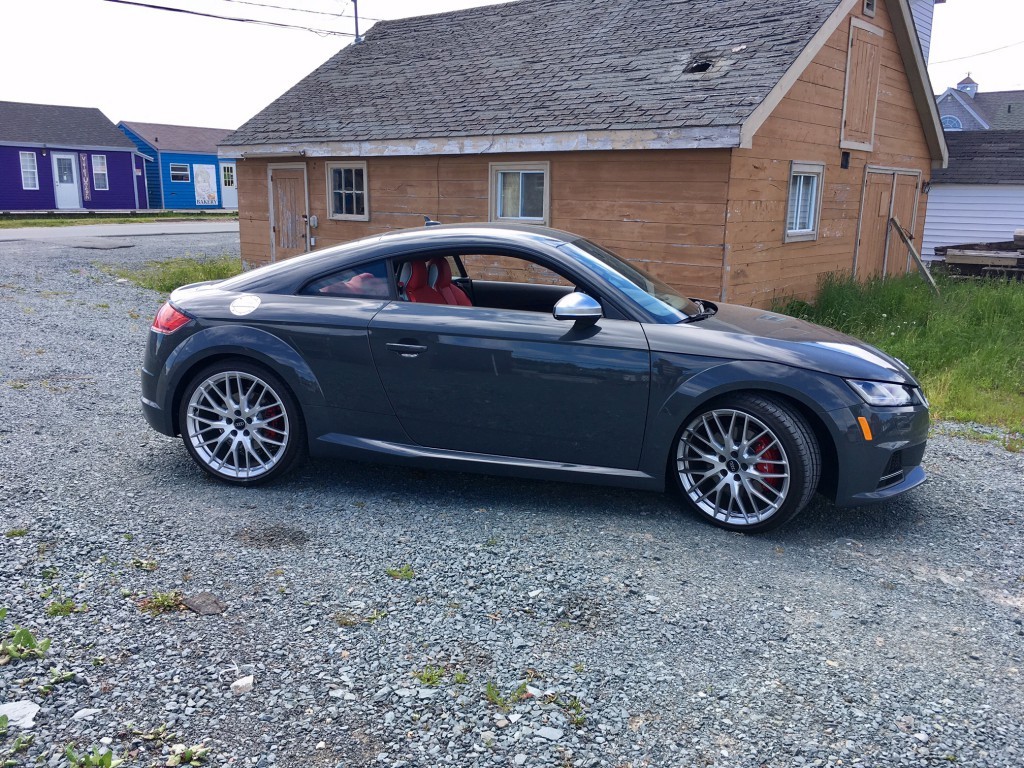 The TTS features different driving modes such as comfort, dynamic and individual. The latter allows you to pick and choose how individual parts of the car react such as steering, suspension and engine response. My plan was to keep it in comfort for the entire ride.

It was just ten minutes into our trip from her family farm in Burntcoat, NS when she pointed something out to me.

“You’ll want to put it in dynamic for this next little stretch of road,” she said.

She was right. Not only did the back road from Noel to Truro feature plenty of bends and S-curves, but it was freshly paved. And with our 3 AM start time, there was no one else on the roads. So, with some hesitation (mostly because my girlfriend’s mom was following directly behind us in her F-150), I opened the TTS up. 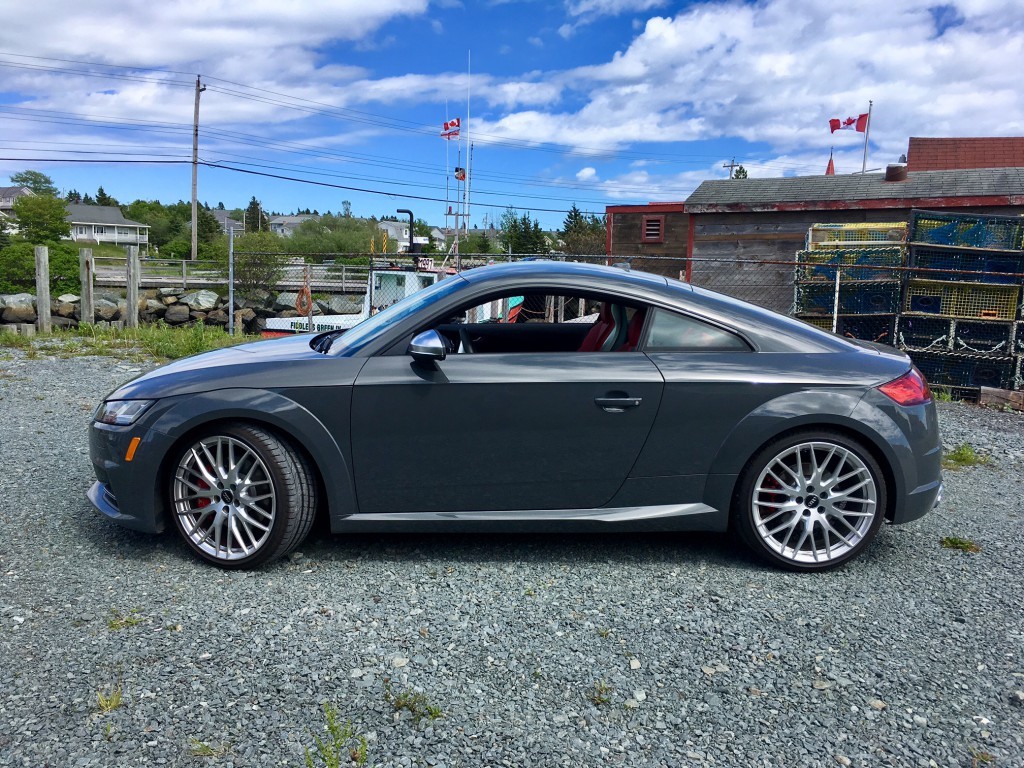 It was only too happy to show me what it can do. Accelerating out of a bend was a breeze. Turn in was direct. Body roll? Non-Existent. Carving corners was pure bliss.

And when matched to the 2.0 litre turbocharged engine, which produces a healthy 292 horsepower and 280 pound feet of torque, the TTS was able to put a smile on my otherwise cranky face (I’m not a morning person).

That engine is mated to a six-speed automatic. There were a few times when I wished I had  had an extra gear, but otherwise the dual-clutch transmission is quick-witted and smooth. If you want another gear, you’ll get it with literally no hesitation and you’ll be treated audibly to a blip of the exhaust when you do.

Want to show a Mustang driver what a tiny German can do? The TTS will happily catapult you to 100 kph in under five seconds. I’ve read 0-60 (miles per hour) times anywhere from 4.9 seconds to 4.6 seconds. That’s supercar quick. In fact, the old Audi R8 V8 posted a 4.3 second time. 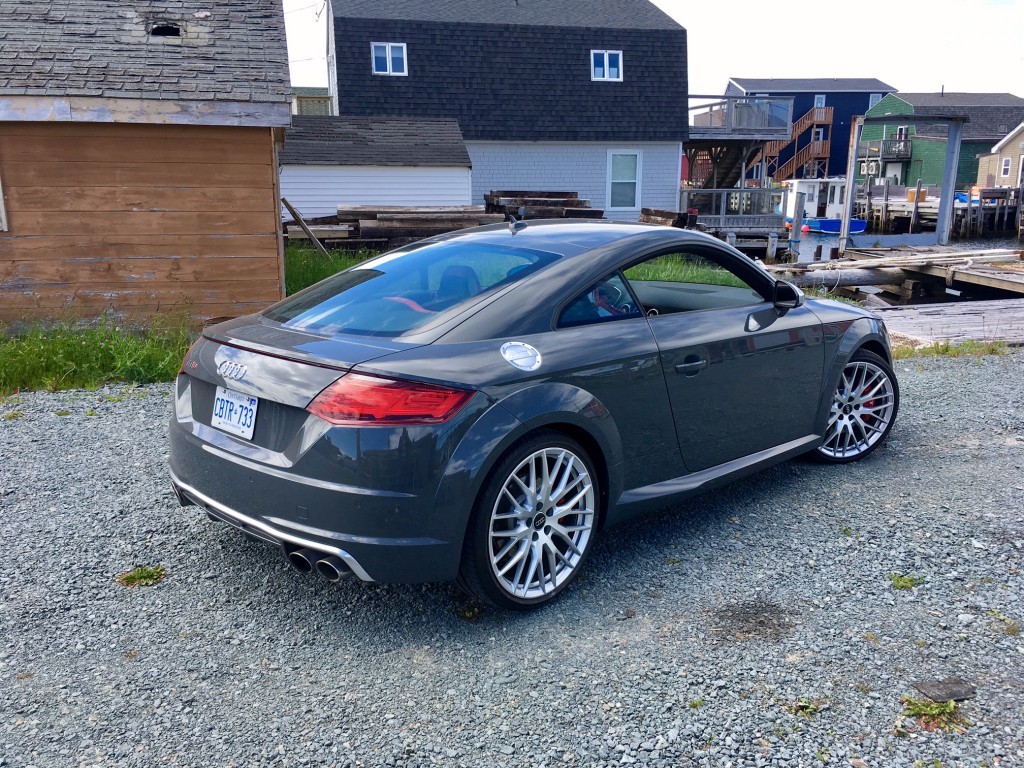 Fast times are great and all, but fast cars are useless without strong brakes. The TTS’s red painted Brembos were happy to oblige with no brake fade. In fact, they brought us to nought in a jiffy when I spotted a cat and its kitten hanging out in the middle of the road coming out of a blind bend. Don’t worry, the cats eventually ran off to their home after taking a moment to process just how close they were to losing their lives, and from being mesmerized by the TTS’ clear, crisp LED headlights.

When we got to a Tim Horton’s in Truro to meet up with the rest of our group, I asked my girlfriend if she regretted taking the Audi. She said no, assuredly, and to my surprise even said she didn’t find it to be particularly uncomfortable. She recognized the stiffness of the suspension, even in comfort mode, but it wasn’t so horrible that she couldn’t handle it.

Indeed, the TTS does have a firm suspension, but I’m used to firm suspensions. They do not bother me on certain cars. On the TTS, it’s perfectly acceptable. If you complain about the suspension on the TTS, you’re either getting old, or you don’t want a performance car in the first place. Get yourself a GT car and stop complaining. 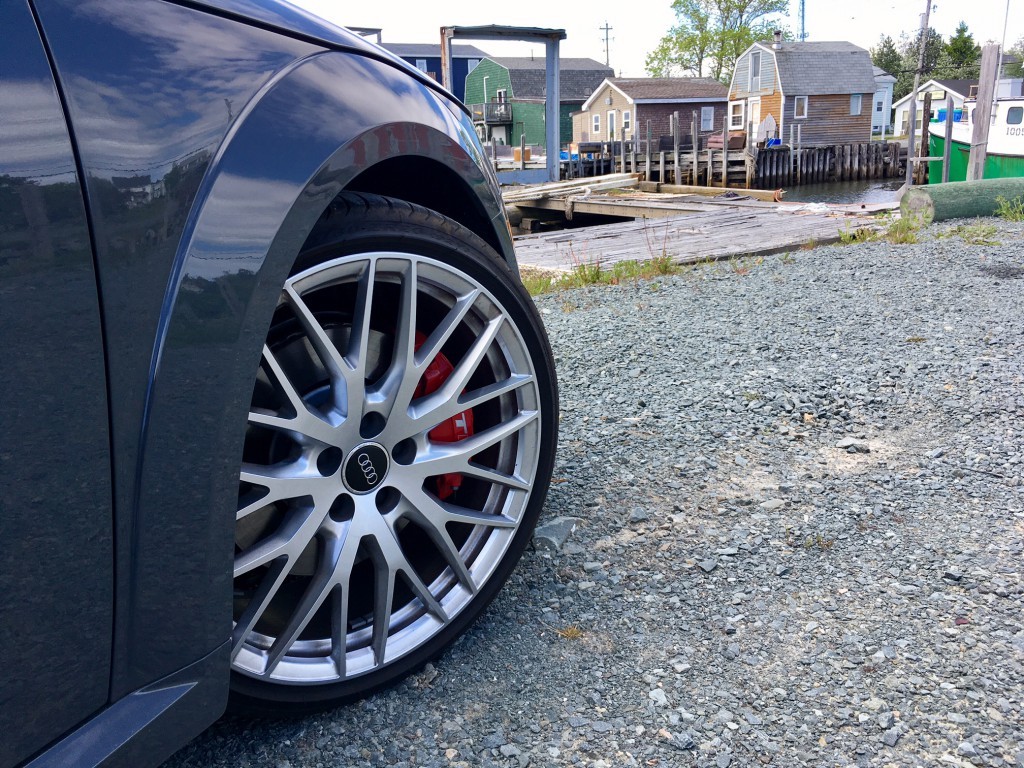 I was averaging a rather disappointing 11.9 L/100 kms when driving around town. By the time we got to the confederation bridge, our efficiency had increased to 9.7 L/100 kms. Much better.

Much better. Hmmm. That reminds me. Is the R8 much better than the TTS? Perhaps in some respects. But if you’re looking to experience what Audi can do when it puts its performance chops to the pavement, the TTS does not disappoint. The R8 is going to be quicker, and will likely generate more stares, but if you’ve always dreamed of getting one and life gets in the way of you actually owning one, the TTS sure makes a decent case for itself . Porsche has the Cayman for those who can’t experience the 911, and Audi now has the TTS for those who can’t experience the R8.

And what an experience it is. 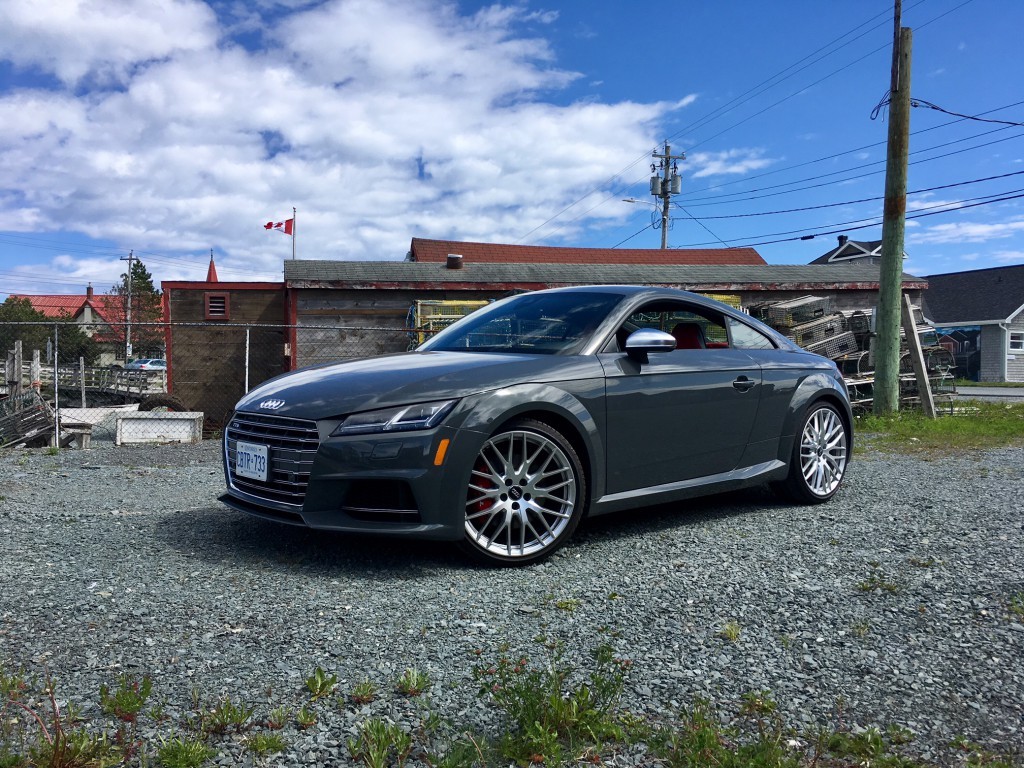