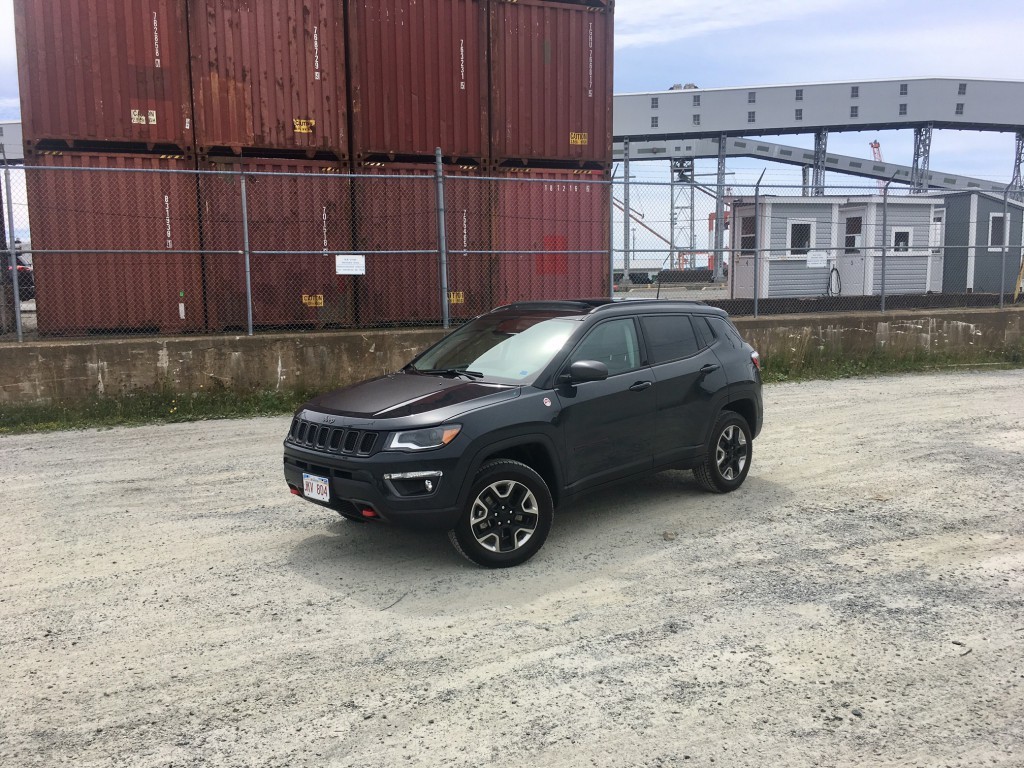 Perhaps one of the worst vehicles to ever come out of the Jeep brand was the Compass and the Patriot.

The two platform sharing siblings were meant to be an affordable way to get yourself into the Jeep cult. The problem? They were both rubbish.

The Compass and Patriot were not trail rated, meaning they couldn’t perform the same abilities off-road as say a Wrangler or a Grand Cherokee. In fact some didn’t even have all-wheel drive at all, just front wheel drive. Blasphemy!

And on top of all that, the Compass looked like an awkward Jeep version of the already ugly Dodge Calibre. The Patriot, at least, embodied what Jeep wannabe enthusiasts wanted: it looked like a rugged boxy Jeep. 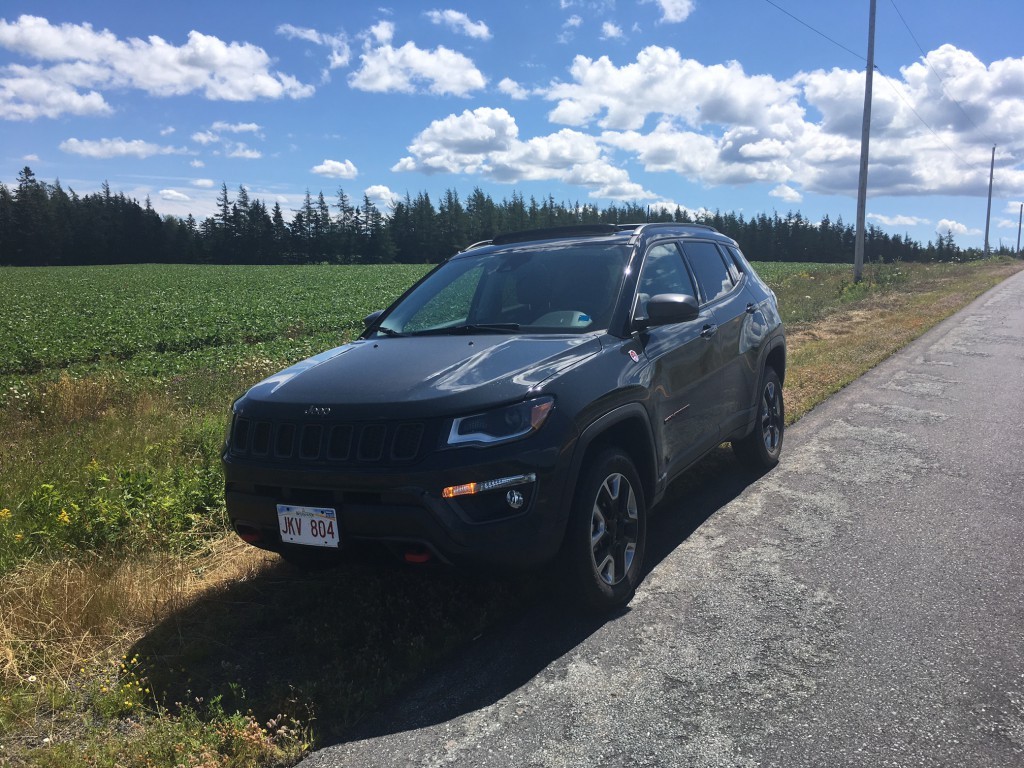 So then, when it finally came time to come up with a new design – literally 10 years later – Jeep announced that they would be running a single model in the segment. Most were surprised when it was announced that the grisly Compass wouldn’t be the one to bite the dust. Indeed, it was the Patriot that said its final goodbye last year.

The good news is, the new Compass has finally done something about that questionable styling. Referred to as the “Baby Grand” inside Jeep headquarters, the look does take on a lot of styling cues from big brother Grand Cherokee. It’s also two inches shorter than the outgoing version. 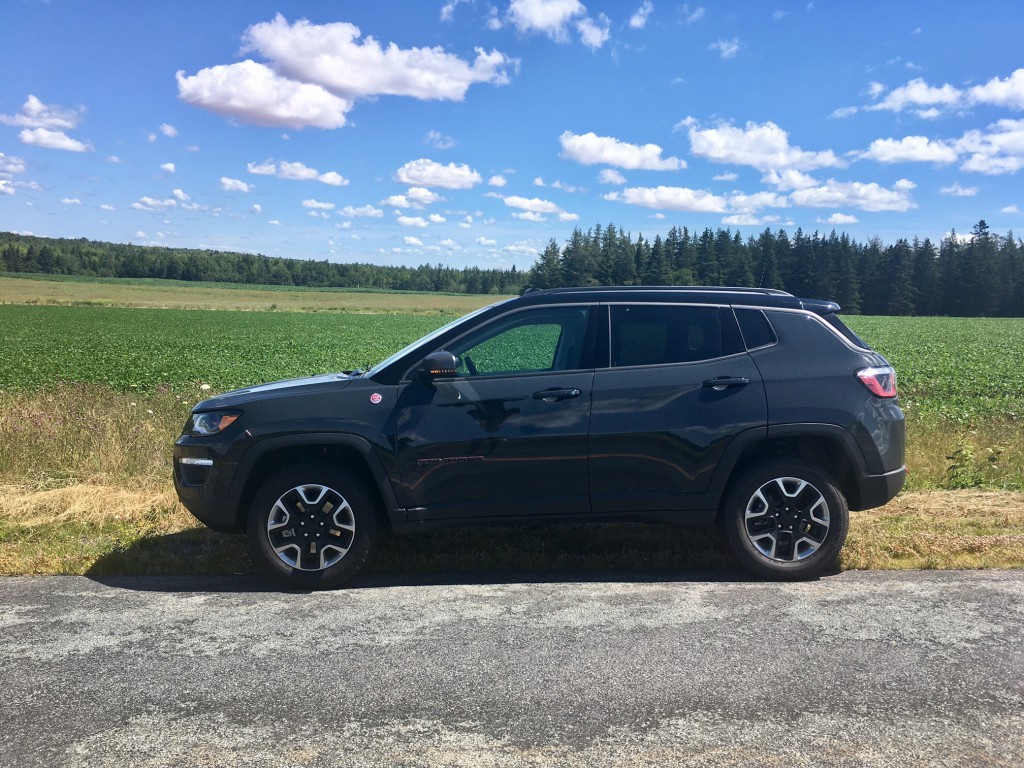 If you get the Trailhawk version, you’ll be treated to a raised ride height along with improved approach on angled terrain, red tow hooks front and back, HID headlights, and unique 17-inch wheels. As far as anyone is concerned, this Jeep certainly looks the part now.

I ended up unexpectedly getting seat time with the Compass for two weeks instead of the usual one. That gave me a good opportunity to really get to know the vehicle. For example, initially, the interior of the Compass seems quite nice – you get most things you’d want like leather seats,  a large touchscreen for the infotainment, a sunroof and more. But then you start to realize just how uncomfortable the seats are and how low-quality the leather feels. The infotainment system, called U-Connect; widely praised as being among the best in the business, was not quite as responsive as the last Chrysler vehicle I drove. In fact, it froze twice during my time with it. And the sunroof would frustratingly do actions you didn’t want it to. If you just wanted to tilt it, it would open completely. 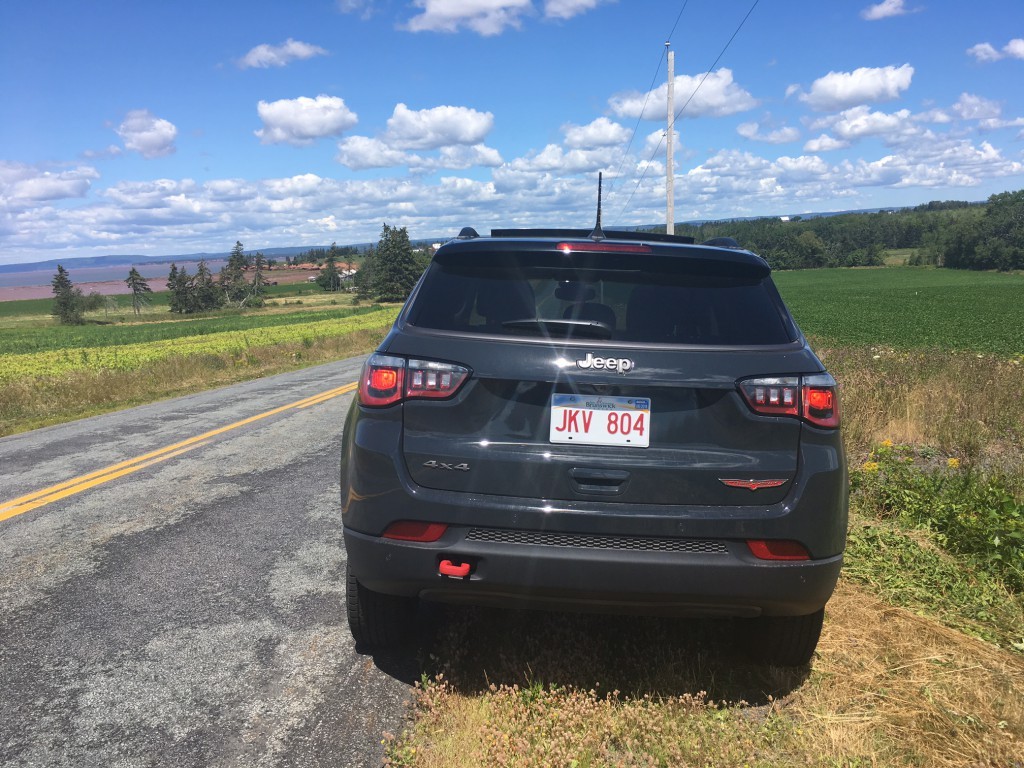 The turn signal stalk is too short and flimsy. On numerous occasions I found myself accidentally flashing the high beams at the vehicle in front of me, when all I wanted to do was signal right. The push button start is often difficult to locate as it is hidden by the wheel and the cup holders seemed placed too low. The fonts chosen for information displayed behind the wheel are difficult to read. Either the blue hues were too dark to see or the information was displayed at a font that was too small.

It’s not all bad news inside, however. There is indeed an adequate amount of space for passengers and cargo room isn’t too bad either. 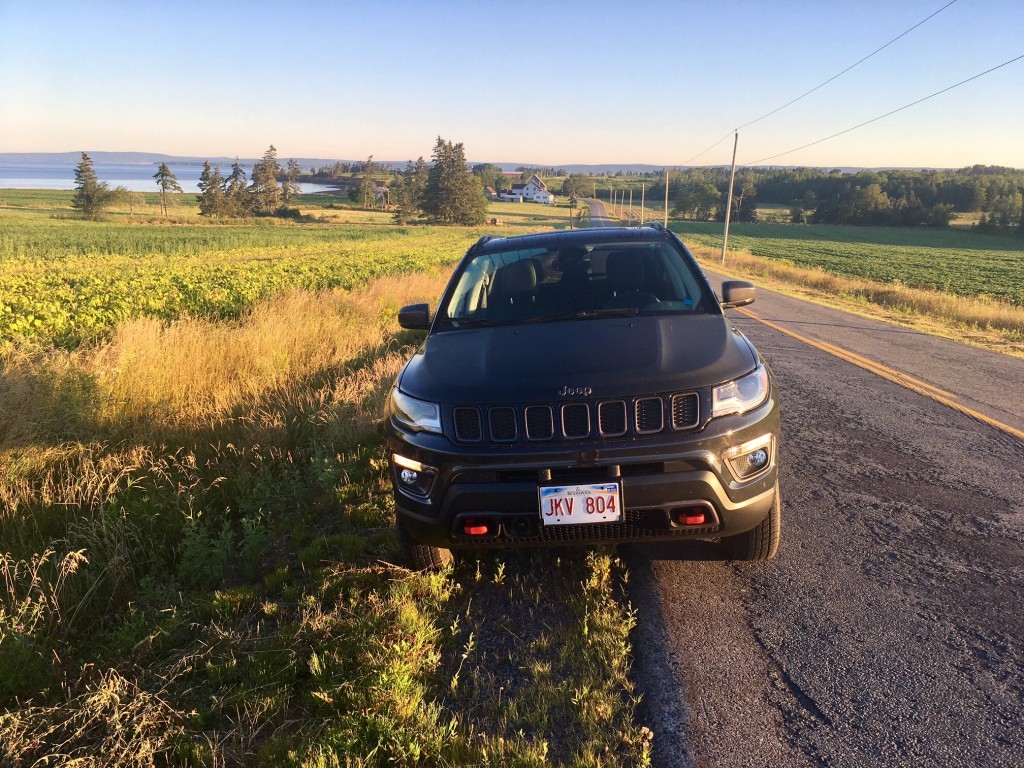 Powering the Compass Trailhawk is a 2.4 litre inline 4-cylinder which produces 180 horsepower and 175 pound feet of torque. The only transmission available on the Trailhawk trim is a 9-speed automatic. And that’s a damn shame because that engine is completely let down by the transmission. It makes 180 horsepower feel like 140. It refuses to downshift when it should to gain more RPMs. It is far too concerned with efficiency for its own good. It lacks any sort of ambition to do its job. As a result, passing on the highway or getting up to speed on an onramp is a frustrating experience.

The argument to have 9-speeds in the first place appears to be moot anyway. On an hour-long highway trip through rural Nova Scotia, going at speeds varying between 100 and 120, I noticed the RPMs seemed higher than they should have been with the cruise control on, hovering around the 2,500 mark. I threw the gear shift into manual to see what gear it was in, and it said it was in seventh. I forced it into eighth. That worked for a few minutes and then I noticed it crept back down to seventh again. What is the point of having an eighth and ninth gear if the transmission refuses to ever let it get there? Isn’t the point of having all these extra gears to save fuel?

Speaking of, the Compass is officially rated at 10.8 L/100 kms city and 7.8 highway. In mixed driving I was able to return 11.0/100 kms. I would imagine that number would have been lower if the transmission actually made use of the extra gears it has. 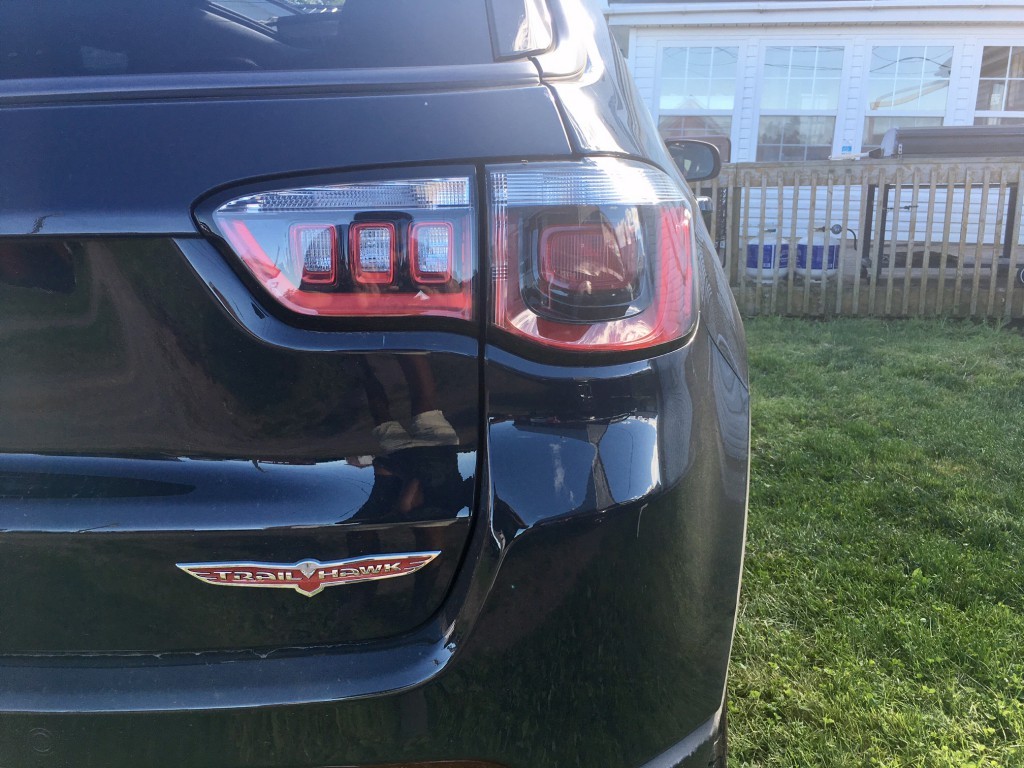 The transmission doesn’t help much when it comes to city driving either. Aside from making the Compass feel like it has less power than it does, it felt lazy, unrefined and lacklustre. This impeded any sort of take off from a stop and made driving around town  frustrating exercise. The added height makes cornering a small challenger and the road noise coming from the tires can be heard inside the cabin.

But what if you take it out of town and into some light off-roading situations? It is a Trailhawk rated Jeep after all and it does feature Active Drive Low 4×4 along with a terrain selector. Pleasantly, this is where the Compass Trailhawk starts to make a good measure of sense. 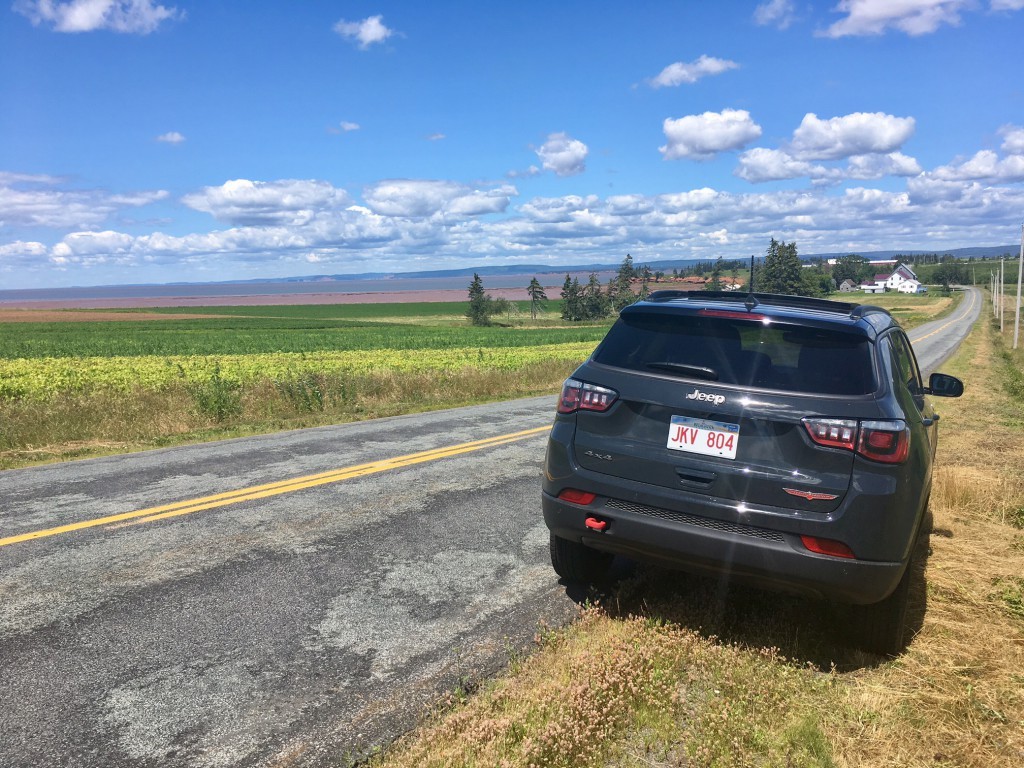 While I thankfully did not need to try the ‘snow’ mode, I did try it out in sand and dirt. And the Compass tackled both terrains with a fair amount of ease. It’s was difficult to get it stuck and surprisingly, the transmission didn’t interfere much with the lower speeds. Is it as capable as a Wrangler? Of course not. However, it can certainly do mild to moderate off-roading duties with few complaints.

After spending two weeks with the Compass I knew this was a vehicle I would never buy. Then again, I asked myself what I would buy in the segment and I came up short. The Compass is now a in a bit of a niche. The smaller Renegade now takes on the duty to battle the likes of the Honda HRV and Mazda CX-3. The Cherokee takes on the Ford Escape and Mazda CX-5. So, where does that leave the Compass? 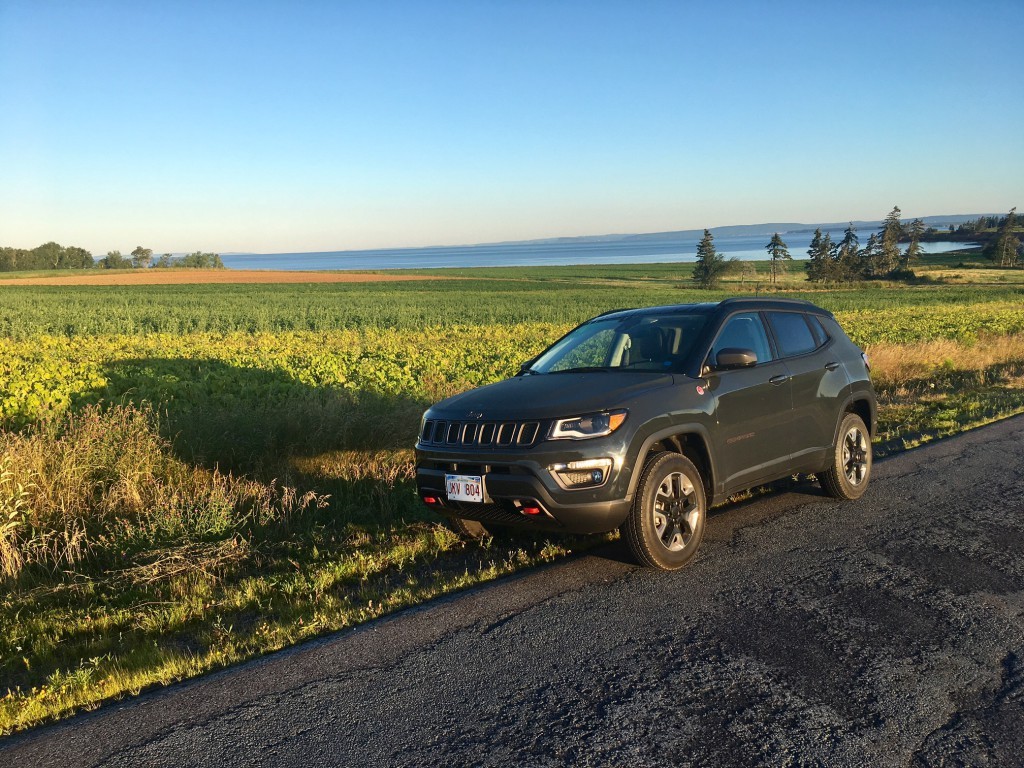 Well, it leaves it as a good looking crossover that does the best impression of an SUV out of any vehicles in its price point. And that can be its biggest appeal. Lots of people want to drive something that is capable of off-roading duties even knowing they’ll never do so. The look is what drives the sale. And if we’re looking at looks alone, the Compass is a rugged looking vehicle. Despite the awful transmission, loud ride and frustrating at times interior, it’s still 100% better than the old one was.

There are other trims to look at within the Compass line up, but I’d hazard to say the Trailkawk is the best buy for your buck. It isn’t cheap by any means, but you can’t find this level of off-road capability for this price point unless you look at another Jeep – either the Renegade or the Cherokee. The Cherokee is bigger, but not necessarily so inside, and the Renegade is smaller inside and out with love it or hate it styling. So when you look at it from that vantage point, the Compass, despite being in a now niche segment, makes a good amount of sense. 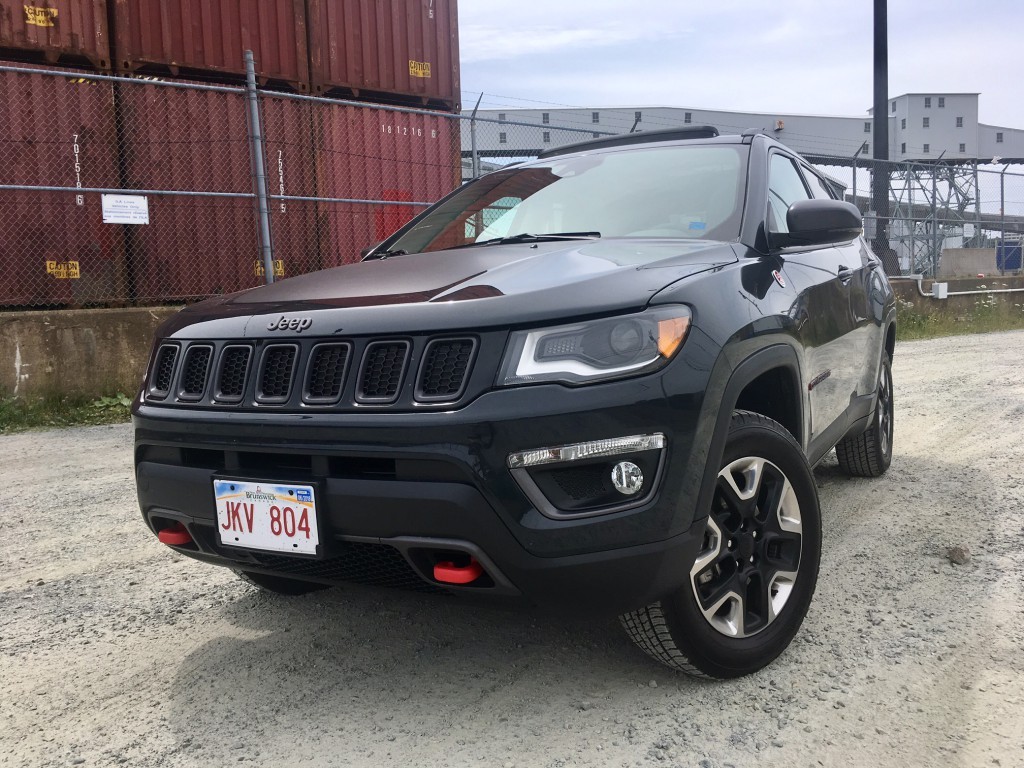