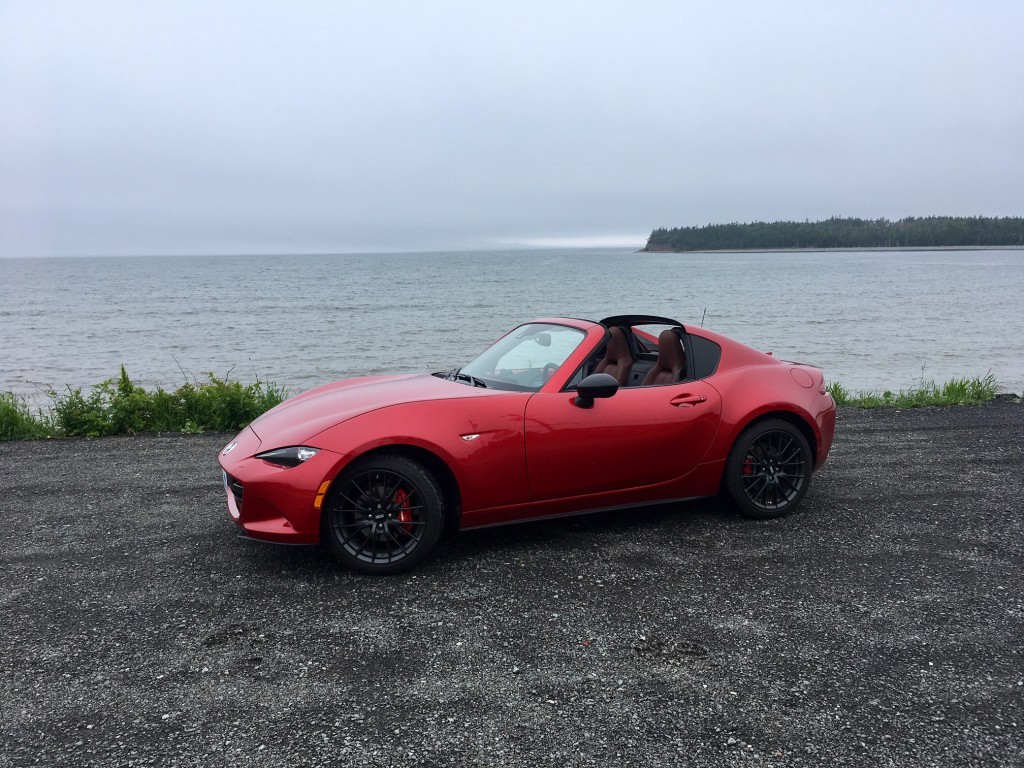 The Mazda MX-5 means a lot different things to a lot of different people.

To some, it’s a “chick car” and those people would never be seen in one. I won’t get into how ridiculous and harmful in general it is to liken something feminine as being a bad thing, but these people feel quite strongly about their opinion. That’s okay, we can all just assume their endowment is not what they wish it to be.

Then there are people like me who adore the MX-5, also known as the Miata. A big reason why is because the little MX-5 presents itself as killer value. Dollar for dollar, there is no roadster that offers better performance value in such a tidy package.

Except beyond that, for me personally, the MX-5 hits the soft spot in my heart for another reason. Last summer, Mazda sent an MX-5 my way to review. They sent the mid-trim GS soft top in red with the sport package upgrade. 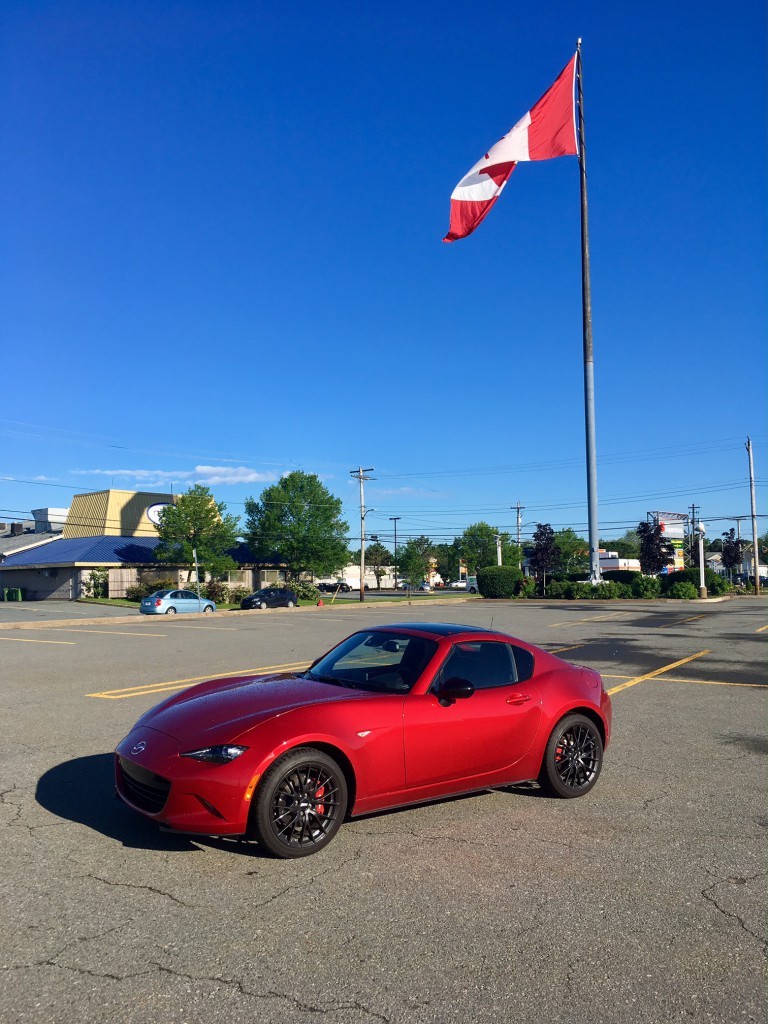 During my week with it, I was invited by some friends to join them at Point Pleasant Park in Halifax for a car meet. I almost didn’t go. I was tired and didn’t much feel like playing the staring game with the Honda fan boys, BMW fan boys and muscle car baby boomers having mid life crises. But since the MX-5 was likely the only one around Halifax at the time, my friend told me to bring it out as it would garner lots of attention.

When I arrived, I parked it amongst the BMW’s and that’s when the attention started. Immediately everyone from every camp came over to take a closer look. Normally I would keep a close eye on a press vehicle, but my attention was elsewhere.

It was focused on a girl I had just met. We clicked instantly. Suddenly people getting in and out of the MX-5, sizing it up and down, leaning against the paint didn’t matter.

While she is a staunch Ford fan, she still liked the little roadster. We quickly decided to go on a date and I took the MX-5. She took her Ford Fusion. I remember we decided to get a drink after a fun time at a local trampoline gym. And I remember her wanting to race me for a short section of road. Naturally, I couldn’t resist; in more ways than one.

Today, that same girl is my girlfriend. 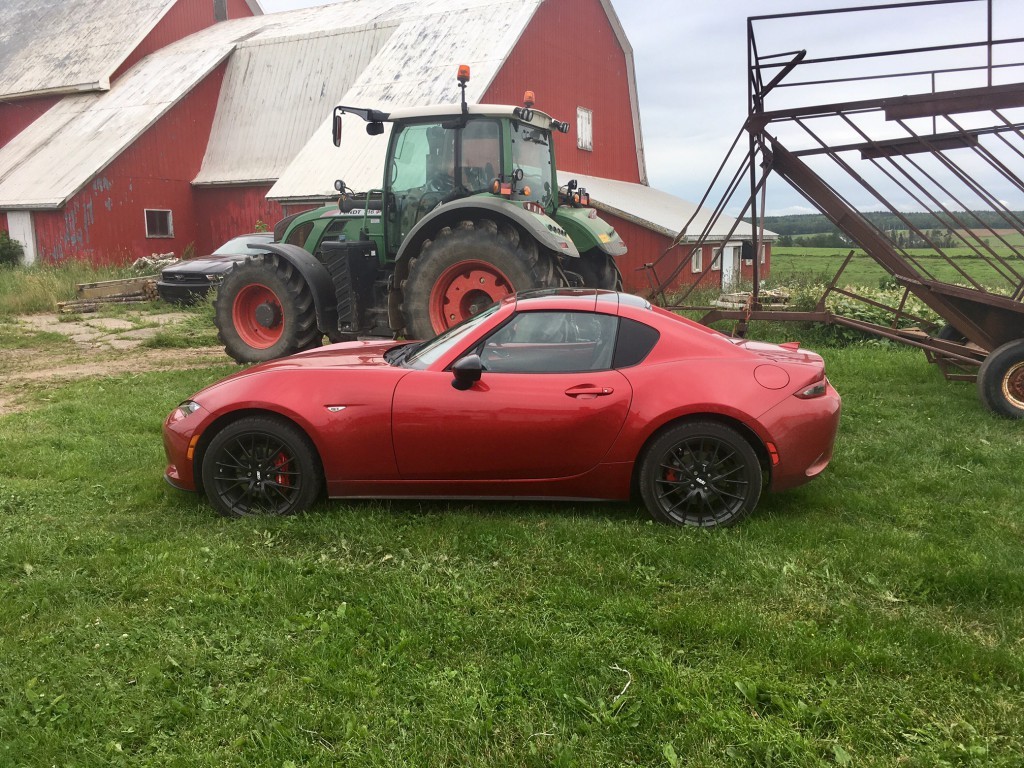 So the MX-5 holds a very special place in my heart as a result. That was the day I met my girlfriend. So it is both astonishing and fitting that Mazda sent me the latest version of the MX-5 exactly one year ago from the first time we met. And it is mind boggling to think that they sent it in the exact same colour with the same performance package with the same transmission. It really helped us take a trip down memory lane.

Except this time there’s a big difference. There’s no soft top. Instead, it has a hard top. But it isn’t any traditional hard top. While it can be electrically retracted there are two buttresses which end up staying fixed when the roof is down. The end result is a Targa style roof. And it looks fantastic with the top up and even better with the top down. 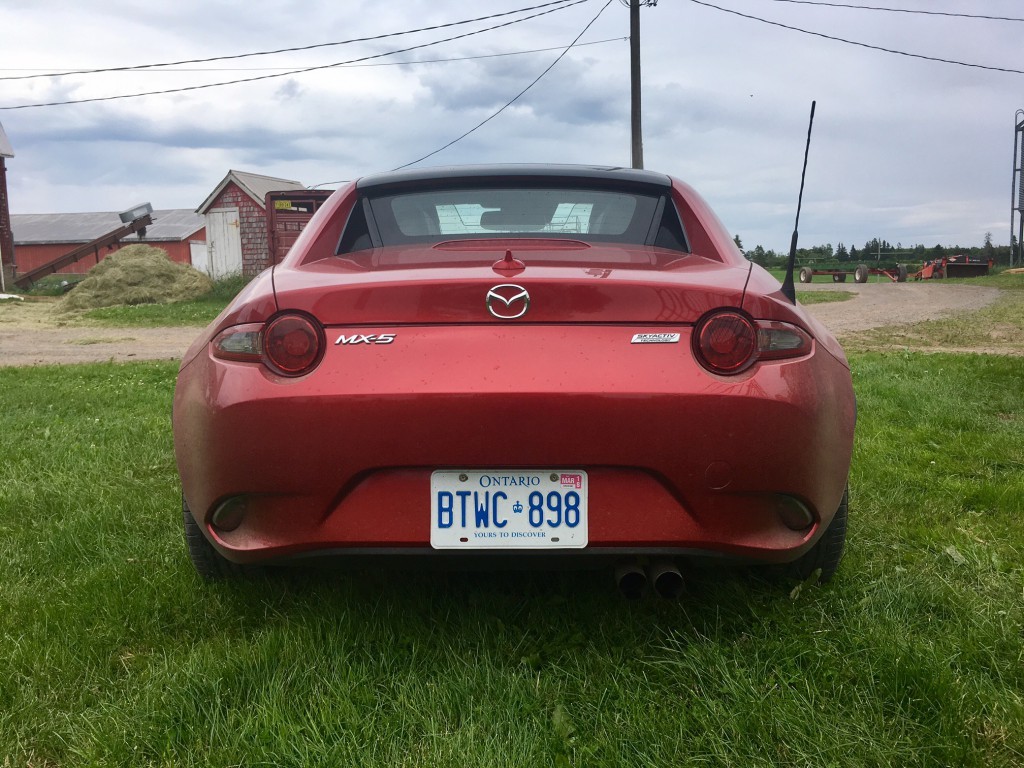 Like the soft top I took to Point Pleasant Park, it also garners a lot of attention from John Q. Public. So much so that I even had one guy jump out in front of it just to see what it was and to take a closer look. That’s right, he was willing to risk his life just to see what this strange convertible was.

And after leaving it with the top down in a parking lot, I came out to a family lifting their small kids up so they could see the interior. That’s probably because Mazda has been nailing interior design of late. And the new MX-5 is no exception. It looks tidy, sporty and posh all at the same time, though I must admit, the red-brown coloured optional leather seats seemed to clash with the bright red exterior colour. 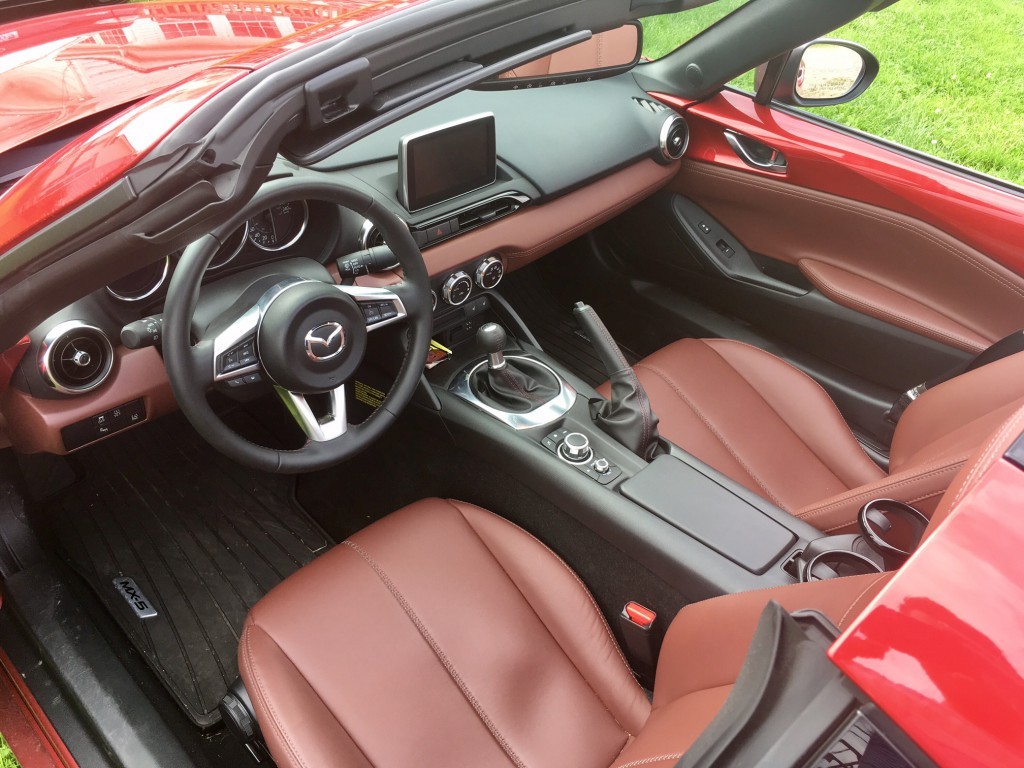 While the interior is pleasant to the eyes, its functionality takes some getting used to. It is difficult to get a comfortable seating position since the steering wheel only tilts; there is no telescopic feature. And while the seat can move back and fourth, its track is limited by the back of the vehicle and for some strange reason you can’t adjust the height on the driver’s side, but you can on the passenger side. I’m told the dealer and lower or raise the seat for you, which is better than nothing, but you shouldn’t have to take your car to the dealer every time you want to adjust the seat. Then there are the cup holders which are located between the two seats, but you often find yourself knocking your elbow against them every time you switch gear. You can move one of them to the passenger side next to the shifter, but then your passenger will be knocking their thigh against it. There’s also no glove box. The only storage available is a small cubby barely big enough for a cell phone and a cubby space between the two seats. 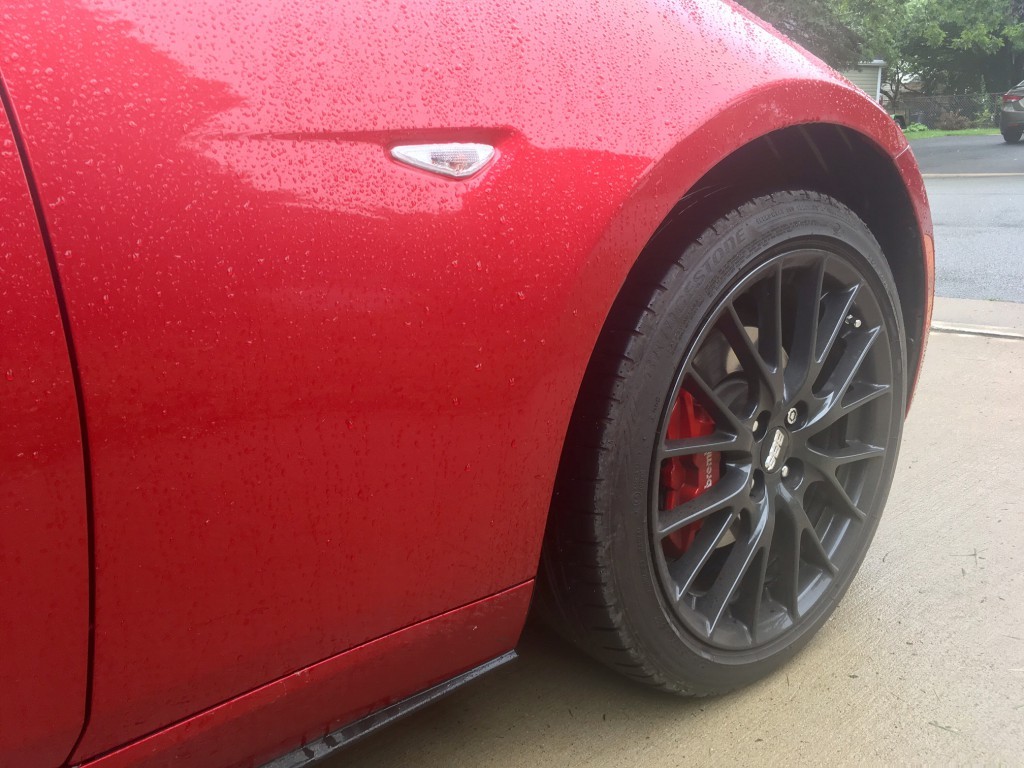 Here’s the thing though. You don’t buy an MX-5 for interior space. So while I can find plenty of faults in its ergonomics, the truth is Mazda did a decent job of giving you everything you need with very little real estate to work with. You still get a decent infotainment system – operational by a knob next to the parking brake, heated seats, and navigation all on the top trim.

Cargo space is not plentiful either but it will still hold at least five or six grocery bags and when the roof is down, it never eats into trunk space either. It is odd, however, that you can only open the trunk via the key fob. There is a small button located near the licence plate on the soft top which allows you access to the trunk, but for some reason the hard top is missing said button. 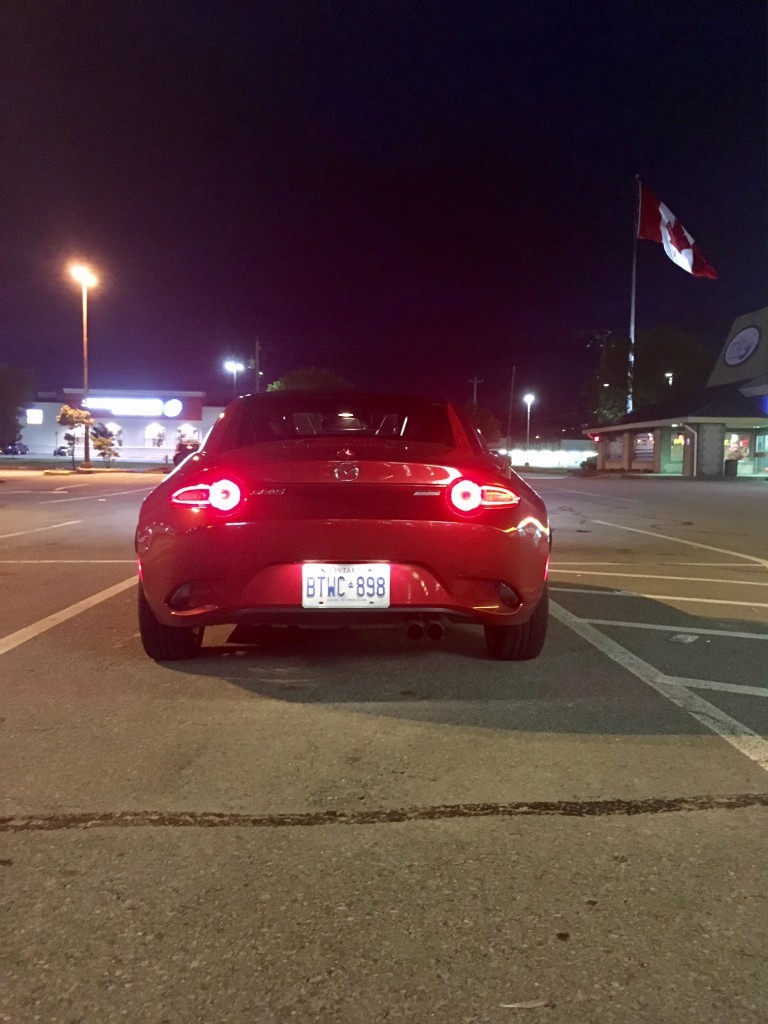 Power comes from a 2.0 litre inline four cylinder which produces 155 horsepower and 148 pound feet of torque. There’s no reason to scoff at those numbers since the MX-5 is light on its feet – it doesn’t need a lot of power. And when mated to the almost perfect six-speed manual, driving becomes pure bliss. This engine and transmission is a match made in heaven.

Add on the sport package which gives you attractive looking light weight BBS wheels, Brembo brakes and a stiffer suspension and you’ve got yourself a machine capable of putting a smile on even Lieutenant Joe Kenda’s face. Sure, the hard top adds about 113 pounds, but it is barely noticeable over the soft top. 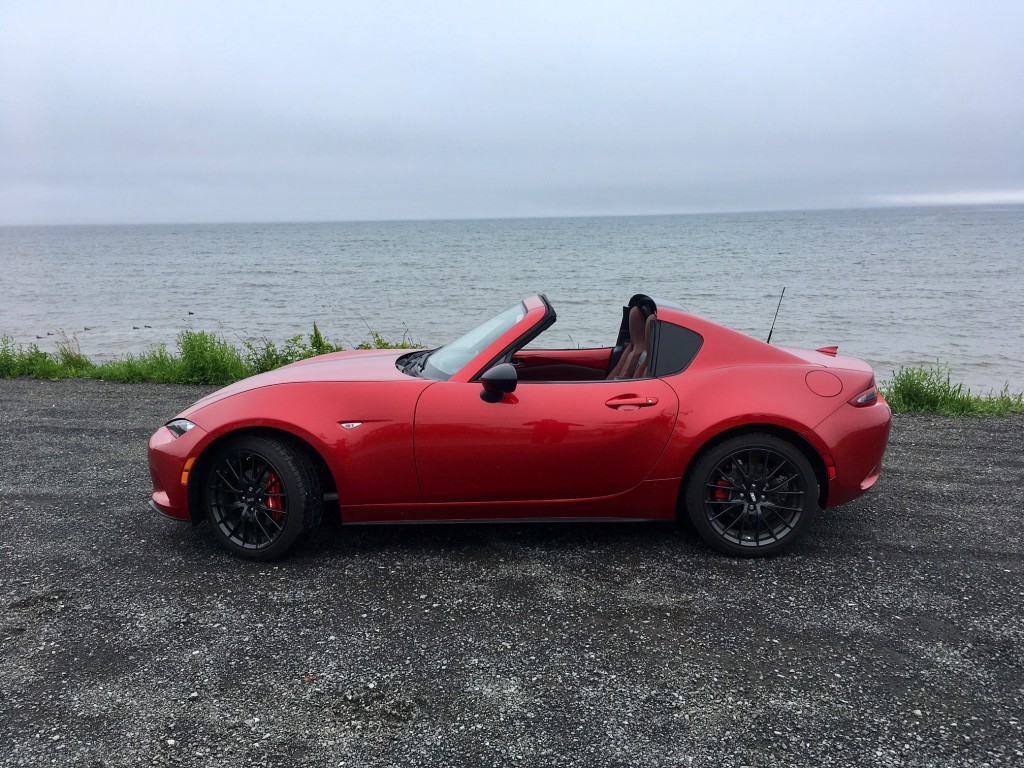 Throw the MX-5 into a corner and it’s only too happy to oblige. Yes, there is body roll – perhaps more than there should be with the optional sport package, but it’s still manageable in the corners. It’s not particularly quick, but it doesn’t have to be. It allows you to have boat loads of fun within the confounds of the law. Overall the MX-5 feels balanced, surefooted and nimble; exactly what a roadster should feel like.

Getting in and out of the MX-5 RF (RF stand for retractable fastback, by the way) can be a bit of an undignified experience, especially with the top up. It’s low to the ground, the doors are tiny and you’re already getting out of a sardine can. It’s also difficult to reverse it thanks to those buttresses. They completely block your view of any cross traffic. This is true of your blind spots on the highway too. And there’s no review camera to help out. A review camera adds weight after all. But that would be a sacrifice I’d be willing to make. Seriously, it’s been a while since I’ve found it so difficult to reverse a vehicle. This isn’t a problem in the soft top. 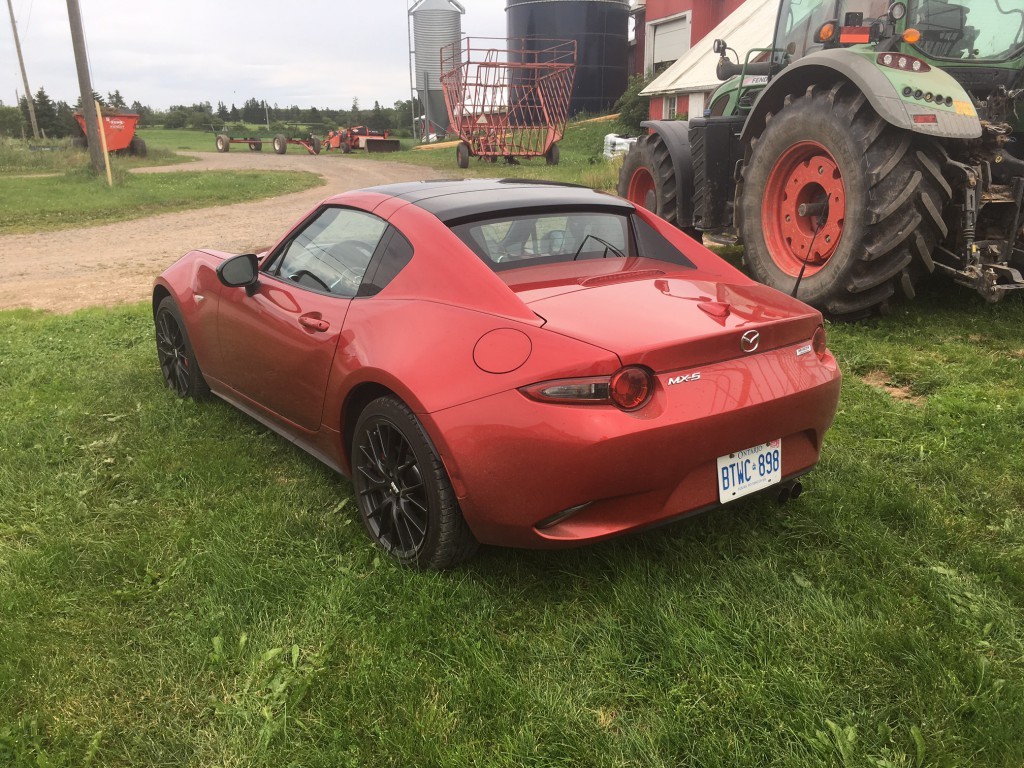 And while the RF retracts its roof in a pretty quick 15 seconds, I was able to retract the soft tops roof in literally three seconds. You can retract the hard top while in motion, but only up to 10 kph which is pretty much walking pace.

The RF is the better looking of the two in my opinion, but the soft top makes more sense. You can retract the roof quicker, there’s no blind spots or obstructions with the top down, it’s lighter and it’s less expensive.

The MX-5 is a special car no matter how you slice it. 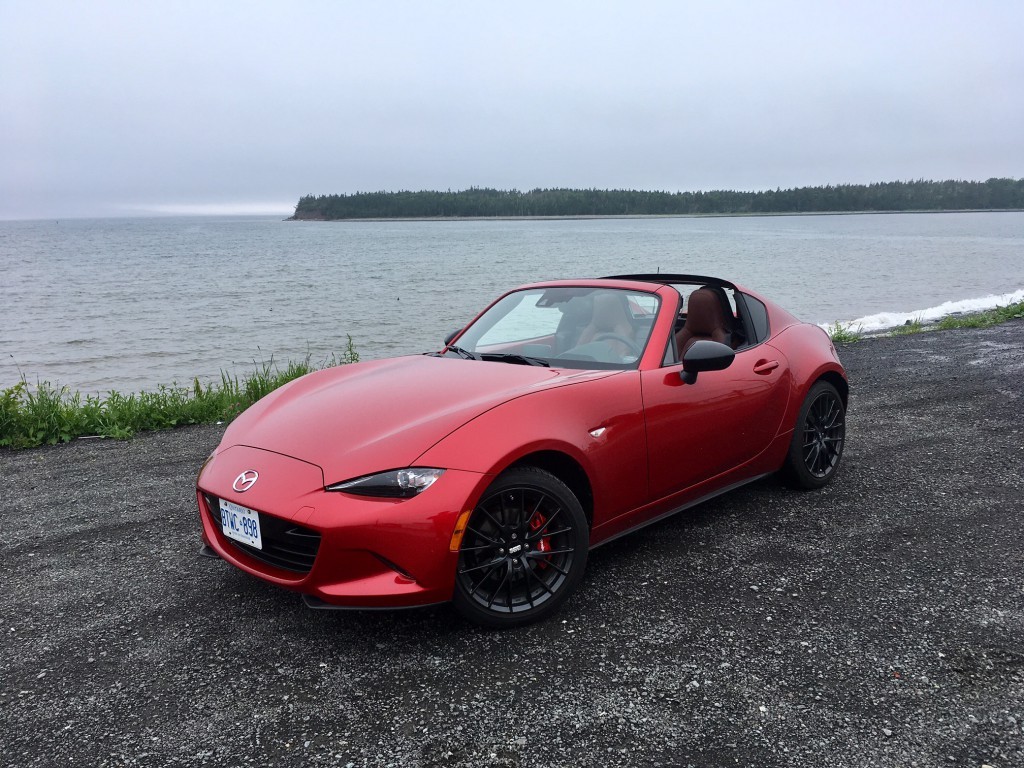