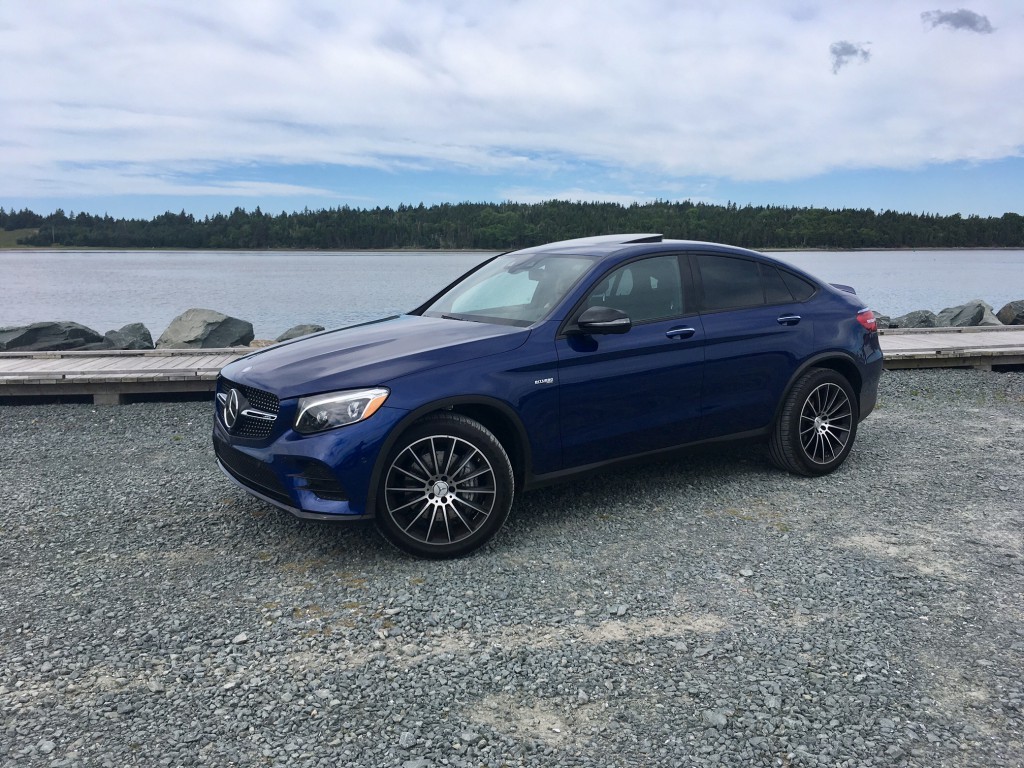 Despite the fact that there is apparently a Flat Earth Society with close to 84,000 likes on Facebook, the majority of us accept that the Earth is round just like every other planet in our immediate solar system. Why would the Earth be any different, especially with clear scientific evidence?

Likewise, we have all accepted that a coupe or coupé is a car that has a two-door body style with a fixed roof. If you add an extra set of doors it becomes a sedan. If you make a retractable roof, it becomes a convertible or cabriolet.

No one questions this. That is, no one except Mercedes-Benz.

To Mercedes, a coupe can also be a four-door SUV with a hatch. Withwith all the recent rhetoric surrounding ‘fake news’ and alternative facts, this is supremely irresponsible of the German automaker. I, of course, say that in jest but I truly don’t understand why the word coupe is being used to describe this vehicle. 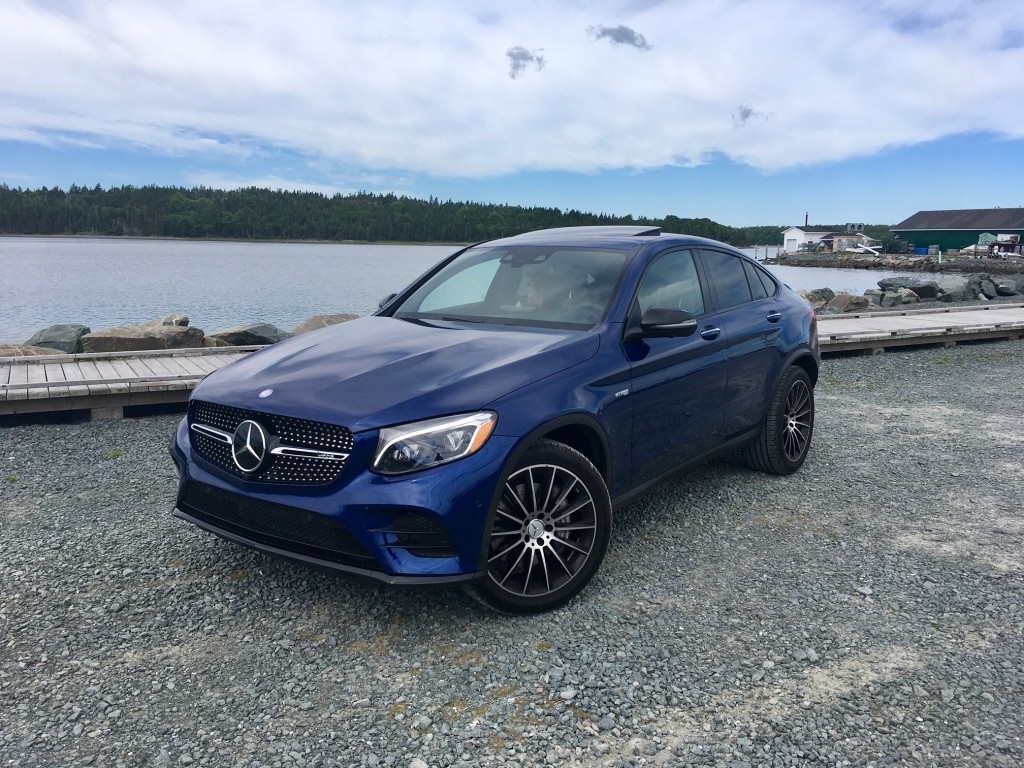 The GLC is Mercedes’ compact SUV. The so called ‘coupe’ version is the same vehicle with a sloped roofline. The reason for sloping that roofline in the first place raises many questions in terms of logic, but if you’re set on doing it, at least give it a name that makes sense. Personally, I think the term ‘fastback’ would suit it better. Or even if they made up a completely new word. But coupe doesn’t work at all.

At this juncture you might be wondering why I’m spending so much of this review debating the name Mercedes gave to it. The reason is because it’s one of the few things I can actually criticize about the vehicle. And while I’m happy to give credit where credit is due for any vehicle, I don’t like blithering on and on about how a great a vehicle is. If you wanted to know that, you would likely just look at an advert from a car company or read a certain local paper’s automotive section.

So there you have it. This vehicle has a stupid name. 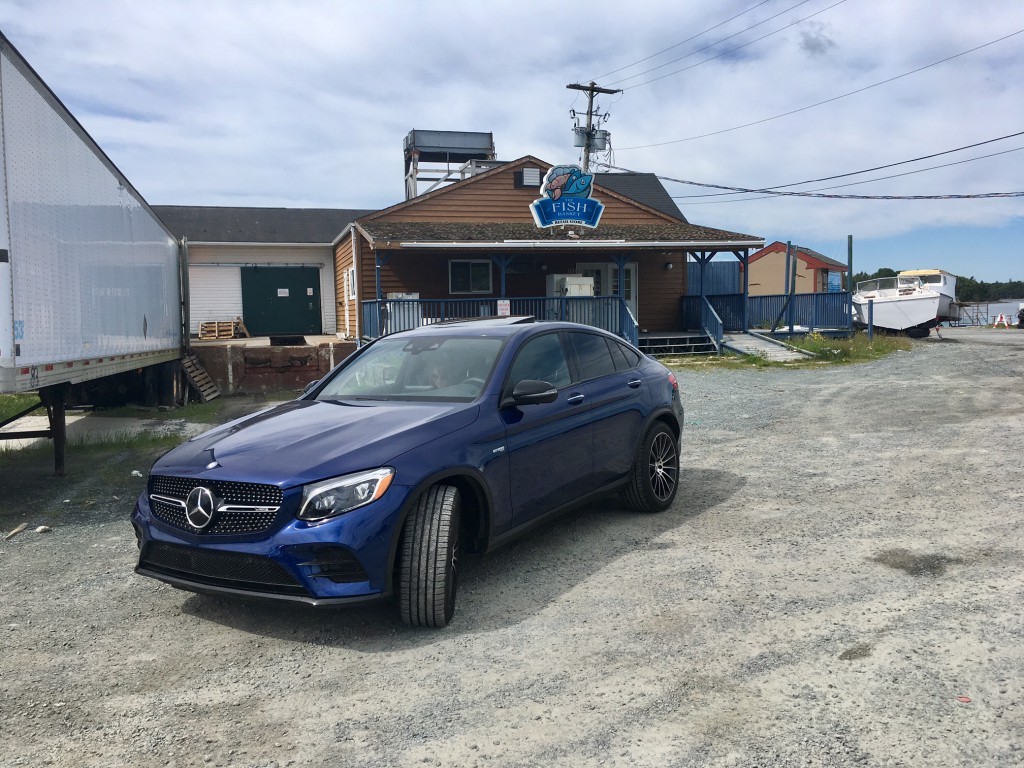 And I suppose, since style is subjective, you could say it looks stupid too. But you probably won’t because no one did during my week with the vehicle. The sloped roof along with my tester’s optional 20-inch multispoke bi-coloured wheels and it’s Brilliant Blue metallic paint helped it to stand out favourably. The AMG diamond grille and quad exhausts helped to complete the look. But about half the time I came out to the parking lot from getting groceries, the GLC had at least one person sizing it up and down.

AMG is Mercedes’ in-house performance devision so the interior is less luxurious and opulent than you’d expect from a Mercedes and more sporting in nature. That means black gloss trim, a checkered flag pattern inside the gauges and a thick rimmed flat-bottom steering wheel. Luxurious amenities are still available though such as heated seats, a heated steering wheel and the like, but you will of course have to pay more. Quality is of course up to par with the Mercedes name plate. 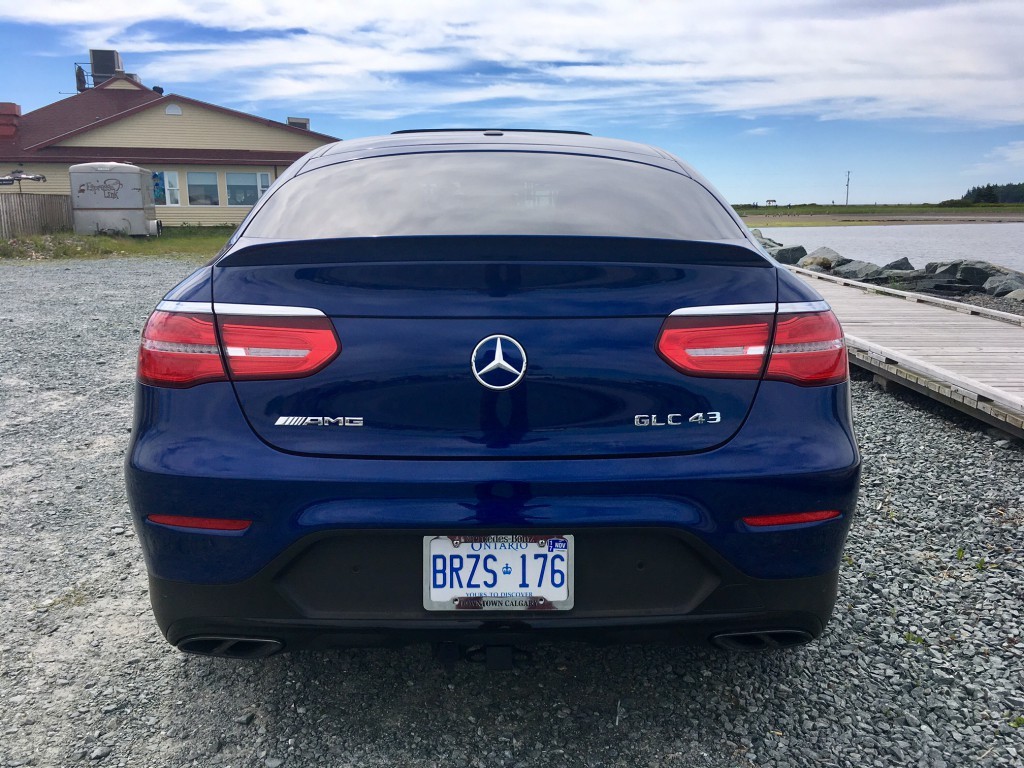 The screen looks like a bit of an afterthought but it is well controlled through a toggle wheel where the gear shifter would normally be. Instead it’s a rather flimsy feeling stalk on the column.

Interior room itself is adequate for the most part. If you’re looking for something with more room the American brands or even the Japanese brands are likely to have more interior room. And in terms of cargo room, it’s a tad limited thanks to that sloping roof. It isn’t so much that stuff can’t fit in the back, it’s just that larger items impede the hatch from closing. With that said, the GLC swallowed most of the stuff from my friend’s apartment that she was moving out of. It also took one of her living room chairs and although the hatch couldn’t completely close (there was about an inch and a half of room left left until it could), it still faired better than my friend’s Volvo V60 whose hatch had a much larger gap to close for the same chair. 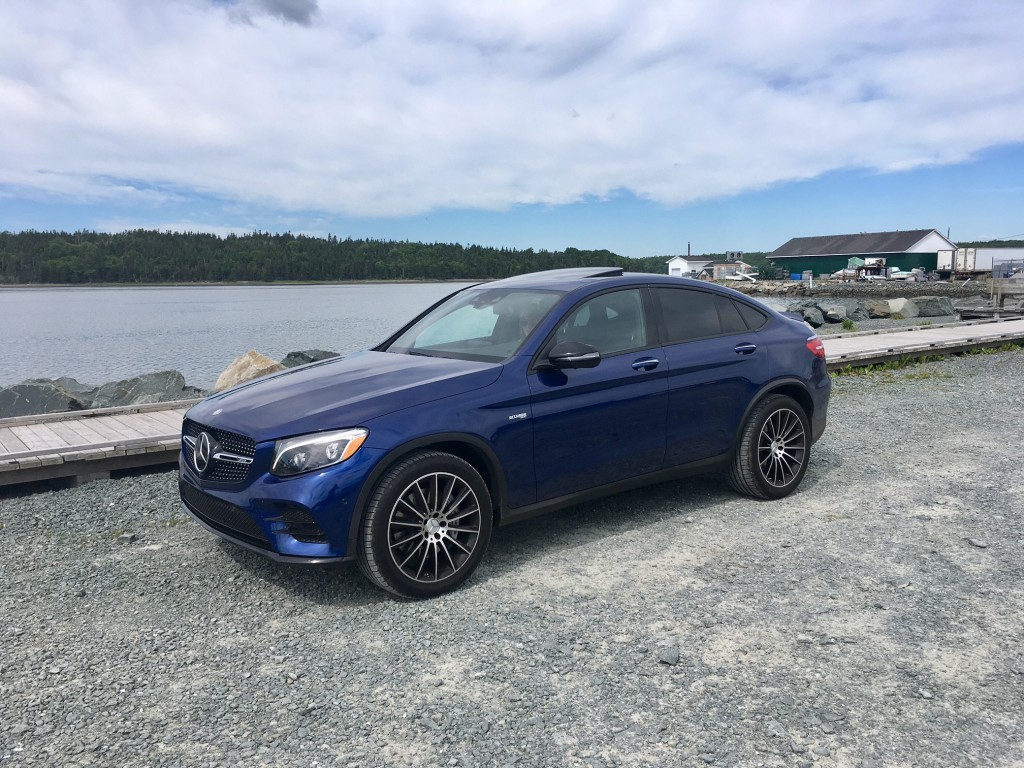 The GLC 43 gets a 3.0 litre twin turbo V6 which produces 362 horsepower and 384 pound feet of torque mated to a nine-speed automatic.  Believe it or not, there will soon be a GLC 63 which will bring that power up to 469 horsepower and 479 pound feet of torque from a twin-turbo V8. As tempting as that sounds, I can’t see it being worth the extra money over the GLC 43, which sits nicely as the happy medium between the V8 and the 2.0 4-cylinder turbo, which makes 240 horses, and which I found was more than adequate in the GLC 300 I tested last year. 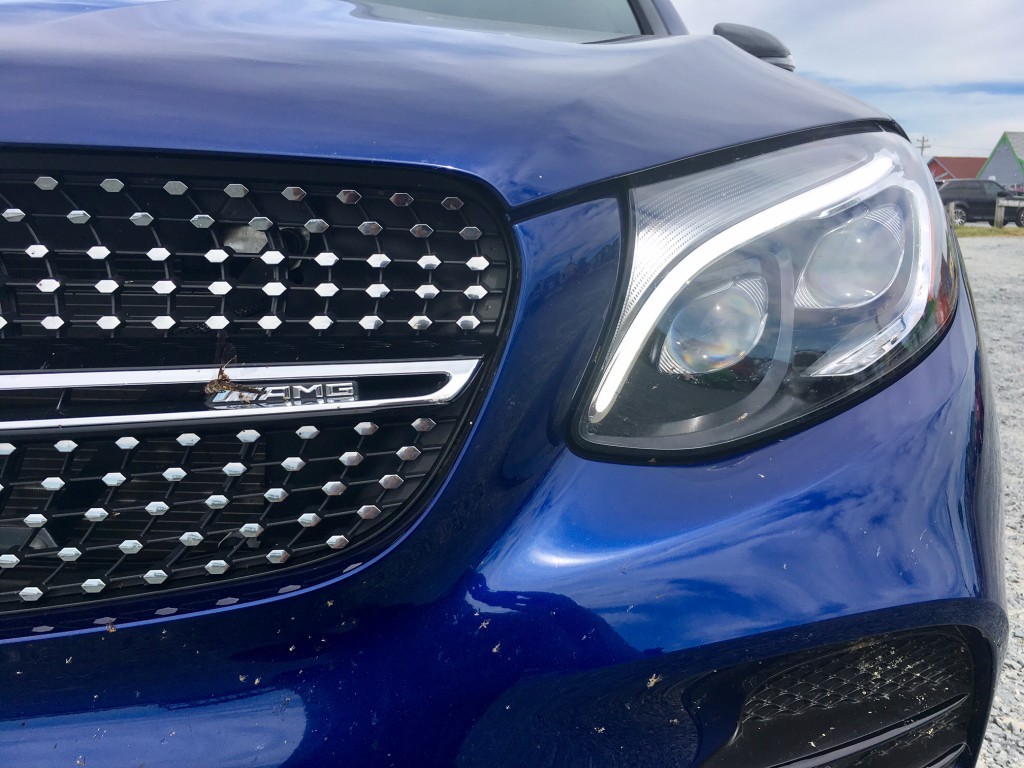 At no point did I think to myself, “this 362 horsepower is fine and all, but I really wish I had more power”. It really doesn’t need more. Then again, I’m completely fine if Mercedes-AMG wants to give it more. But you’ll be paying an extra five grand easily.

Power is sent accordingly based on your drive mode choices. There are five to choose from: Eco, Comfort, Sport, Sport+ and Individual. The latter let’s you set up the engine, suspension, throttle response, steering feel etc. uniquely to whatever you like. The others default to predetermined set ups. When you start the vehicle it automatically defaults to Comfort mode which tames the GLC into a decent GT cruiser and the transmission does what it’s supposed to when it’s supposed to.

Eco mode doesn’t completely neuter power, but it certainly sucks your soul just a little bit. Sport mode livens things up while Sport+ livens things up significantly. The growl of the engine and exhaust note becomes intoxicating. From a stop and in Sport+ mode it will take off from the line with gusto. There is nothing subtle about it. On an hour long trip to my girlfriend’s farm with my parents in tow, I opted to keep it in Comfort mode so as to not jostle my parents around too much or make their ears bleed from the engine. However, with a few nice twisty bends along the way, I didn’t necessarily want to impede my fun. Happily, there is a button on the console which lets you set the suspension setting independently from the other drive modes. This allowed me to keep the vehicle’s comfort mode characteristics in tact all while letting me have some fun when we approached an S-curve. The driving modes truly lets you adapt the GLC 43 for almost any situation. 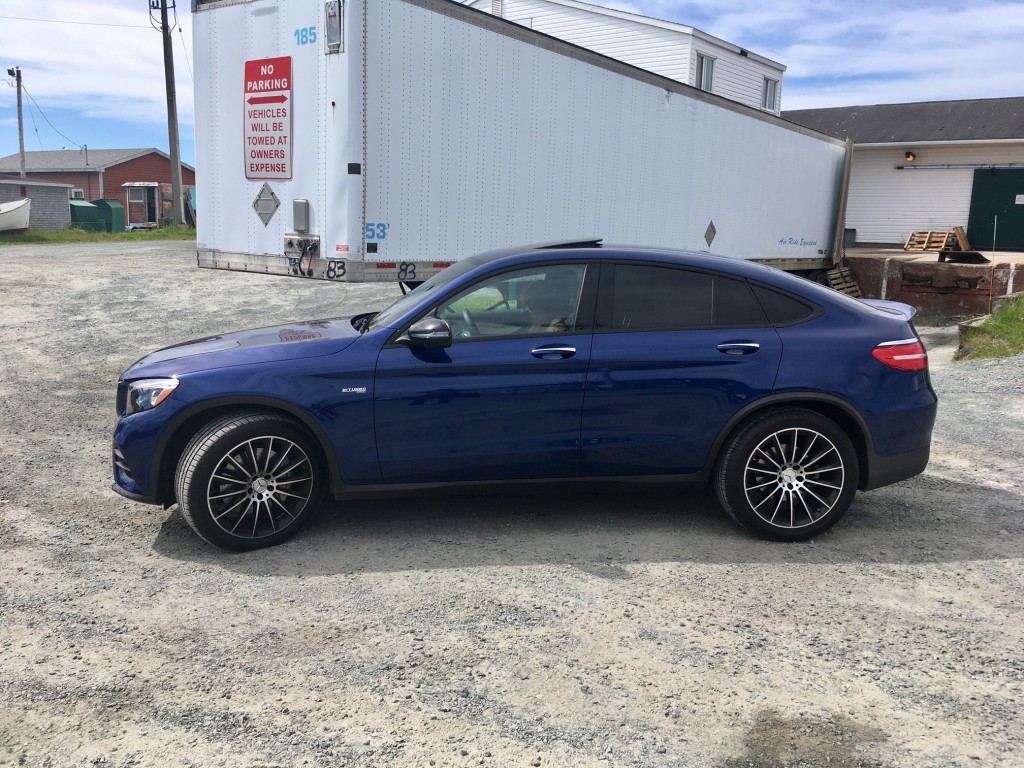 Officially the fuel consumption numbers for the GLC 43 are what nightmares are made of. I’m talking a whopping 17.4 L/100 kms city rating and 11.1 highway. Thankfully, in the real world, you’ll likely end up getting much better than those numbers would suggest. In my week of mixed driving I returned a much more reasonable 12.7 L/100 kms. And that includes many times when I got a sudden jolt of testosterone in Sport+ mode.

But back to my original point, if all I can really find fault with is the ‘word’ coupe in its name, then I’d say Mercedes-AMG has a hit on their hands. I could also name the flimsy gear lever, astronomical price and the necessary sloped roof too. But the latter is easily remedied by just buying the regular GLC 43. That way you won’t need to add ‘coupe’ along with a long non-sensical explanation when people ask you what your new ride is. Plus you save thousands. 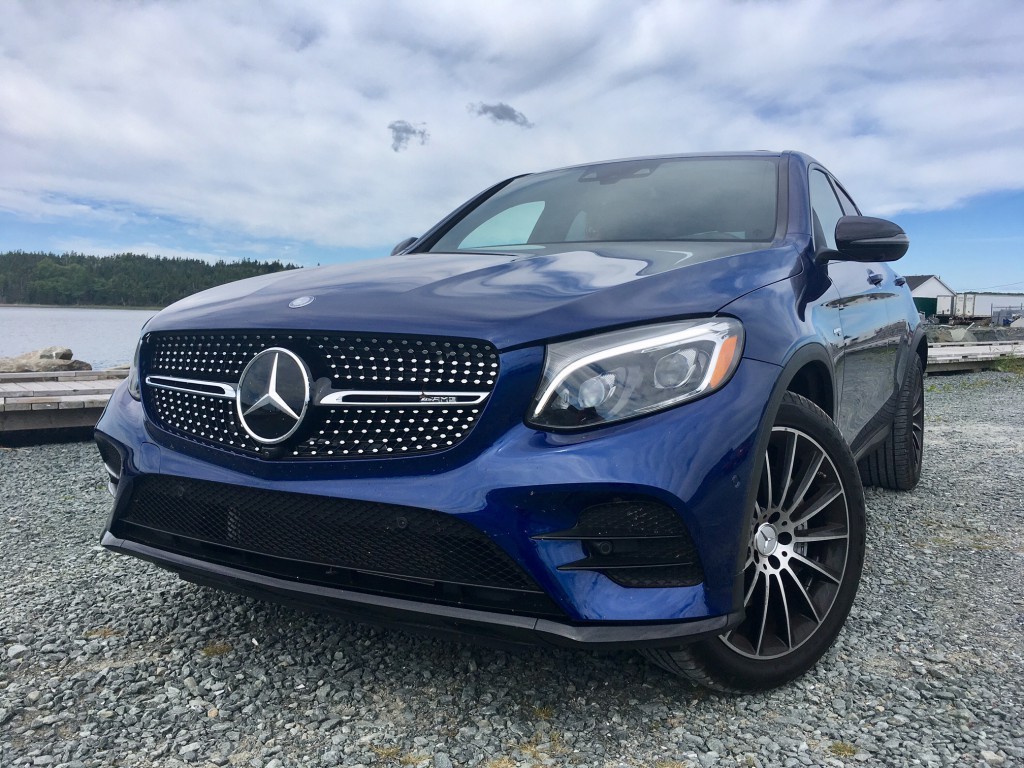