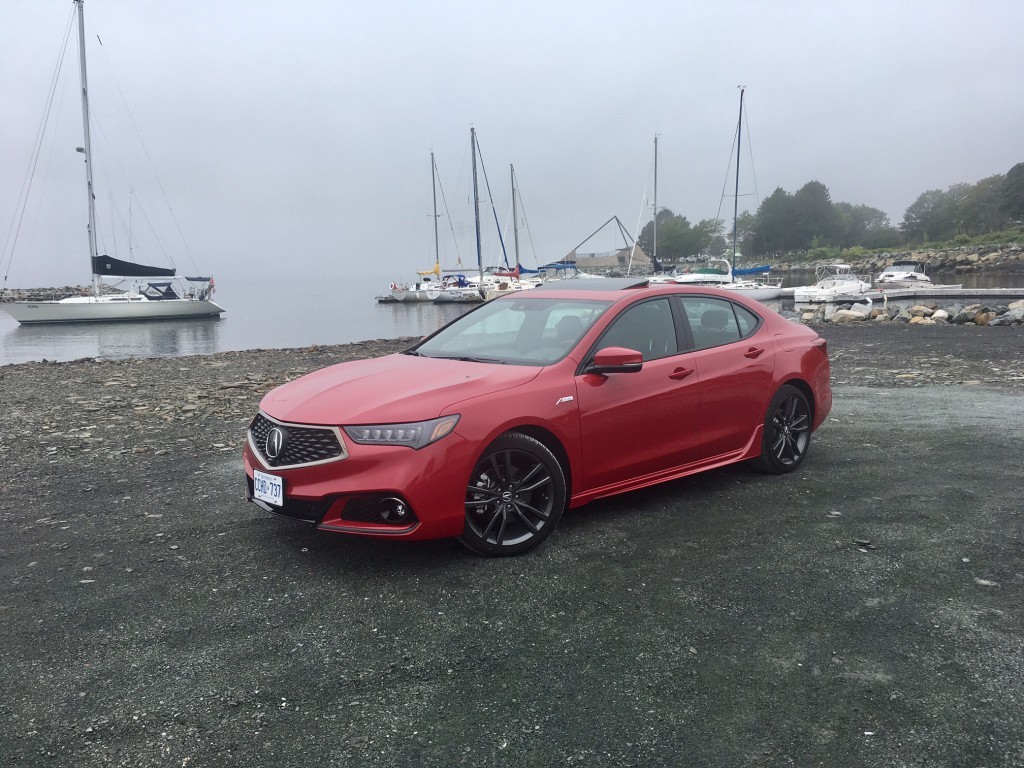 My very first car was a red Acura CL with a six speed manual. I liked the car very much but it wasn’t my first choice.

My first choice would have been a BMW 3-series. But since I was only in second year university and thus, quite poor, those vehicles were largely out of my reach.

The CL was on the max side of my budget, and there was an interesting Saab 9000 and a Volkswagen Jetta Wolfsburg in the running. My parents convinced me to buy with my head instead of my heart. The Acura was more likely to be both better on gas and reliability. If something went wrong – which was entirely likely – where was I going to get the money to fix it?

So, reluctantly, I went with the Acura.

Over a decade later, here I am driving another red Acura. Much has changed since my 1997 CL was cruising the streets, not least of which is Acura’s new corporate styling cues. 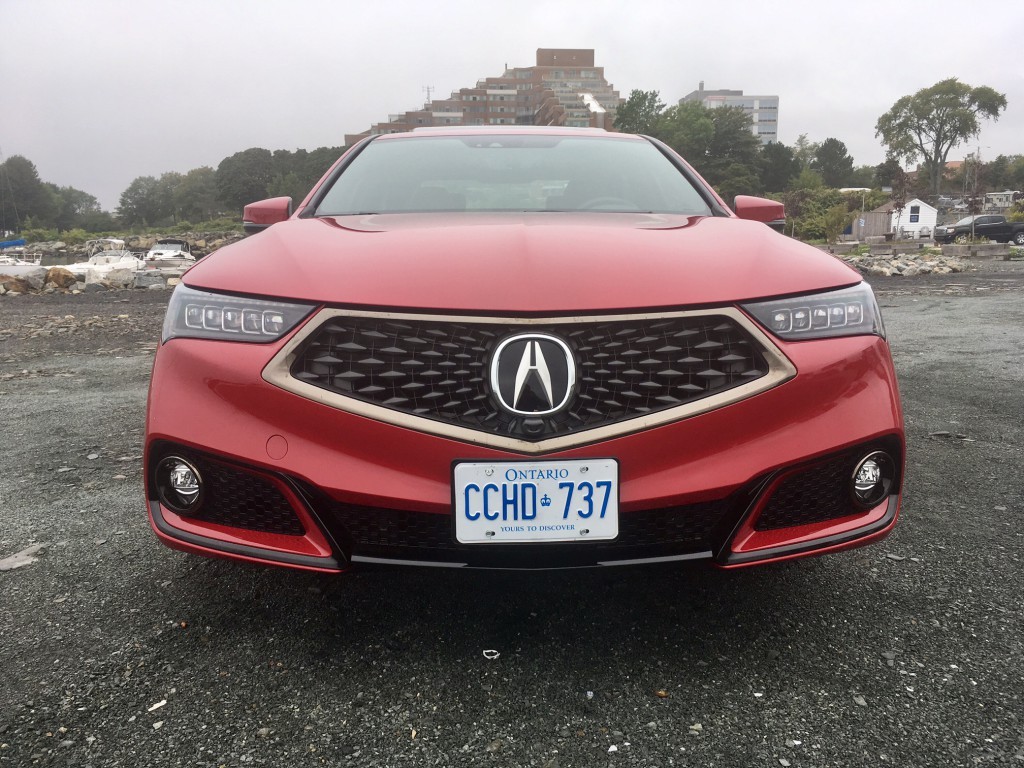 The MDX was the first to get the beakless treatment on the grille. The TLX is the second in the lineup. And it’s probably the most eye-catching feature what with the larger emblem, pentagon shape and piano black design treatment. My particular tester was the top of the line A-Spec model which largely enhances cosmetics such as side skirts, LED fog lights, blackened trim pieces and large round exhausts out back (which were omitted from a lot of previous Acuras.  Acura chose not to touch the tail lights, which I think is a shame because while they look nice at night, they are otherwise rather plain looking to my eye. On top of that, most of the competition is featuring LED rear turn signals at least. Rather nice looking 19-inch wheels complete the look. The TLX in A-Spec trim certainly gets a lot of attention from passersby. 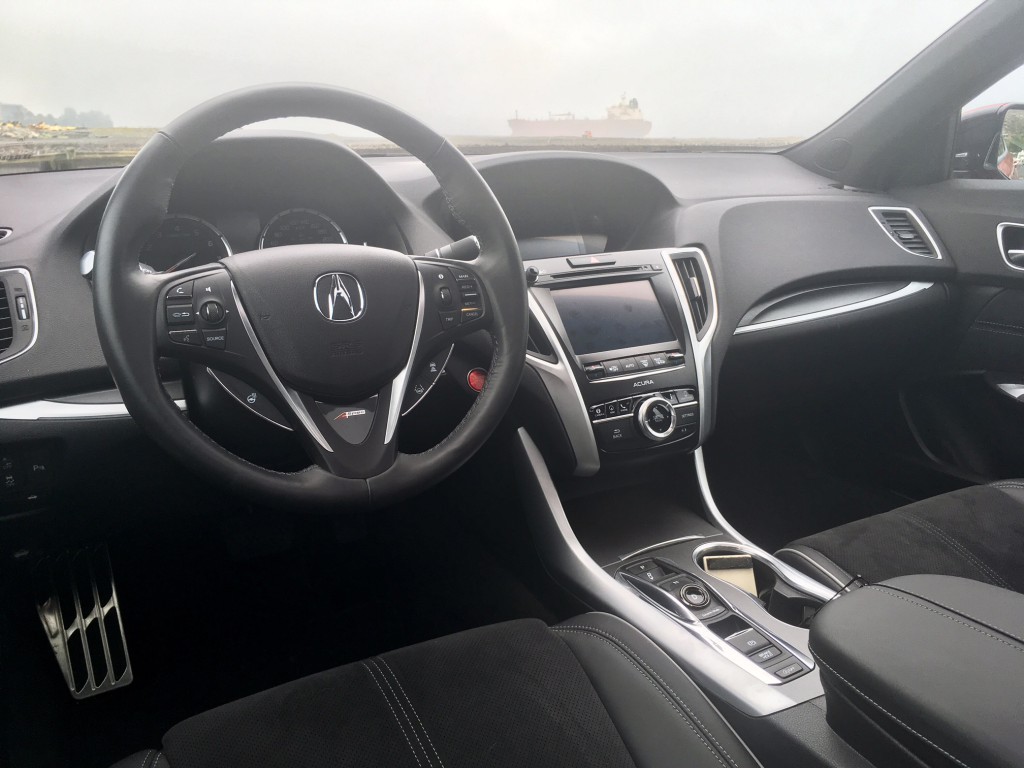 Inside, Acura didn’t change much which is also a bit of a shame. The dual screen set up on the dash has been long hated by automotive journalists and consumers alike thanks to its confusing operation and set up along with laggy response times. The former complaints remain, but response time seems to have improved. I can’t, however, understand how a company of Honda’s caliber still hasn’t found a way to logically lay out the infotainment system. It took me a while to figure out something simple like how to change the radio station for instance.

The TLX’s interior is otherwise decent, if a bit forgettable. The A-Spec trim spices things up a bit with combination leather and suede seating and a thicker steering wheel. There’s A-Spec badging throughout. 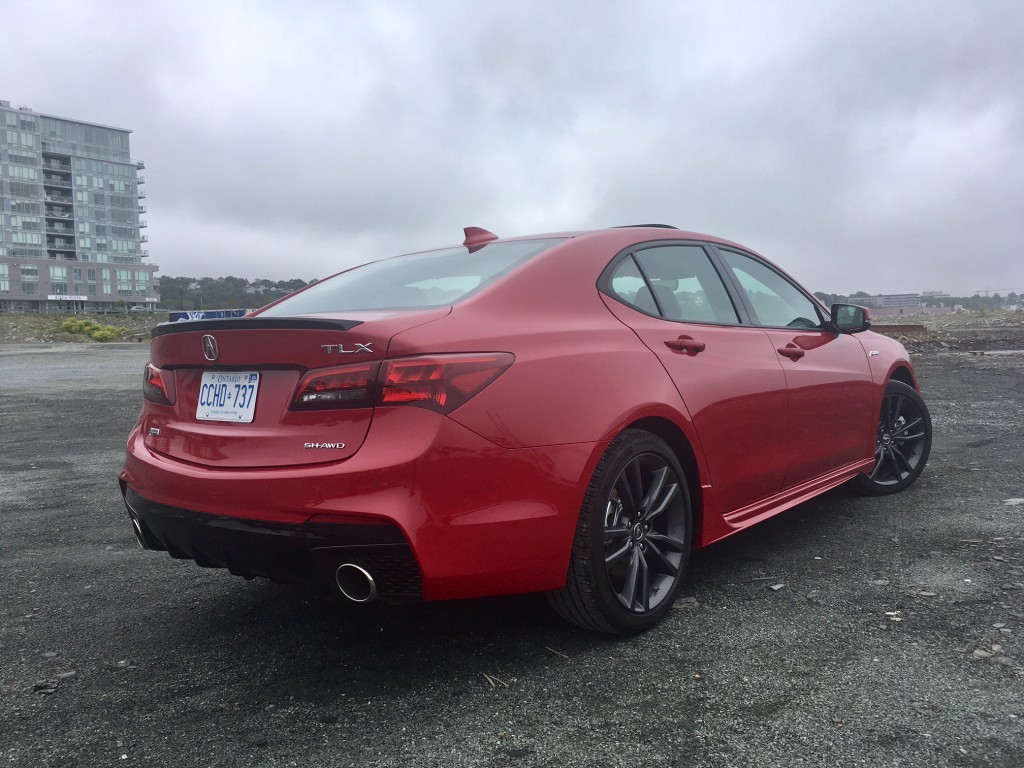 Interior room doesn’t line up with the exterior mass – there’s less room than cousin Honda Accord, for instance, however, within the segment the TLX is probably on the roomier side.

There are two engine options within the TLX lineup and, surprise! Neither rely on turbos for motivation. The 2.4 litre direct injected 4-cylinder that produces 206 horsepower and 182 pound feet of torque. The other option, which is fitted to the top A-Spec trim, is a 3.5 litre V6 which is good for 290 horsepower and 267 pound feet of torque mated to a nine-speed automatic. The former gets an eight-speed DCT. 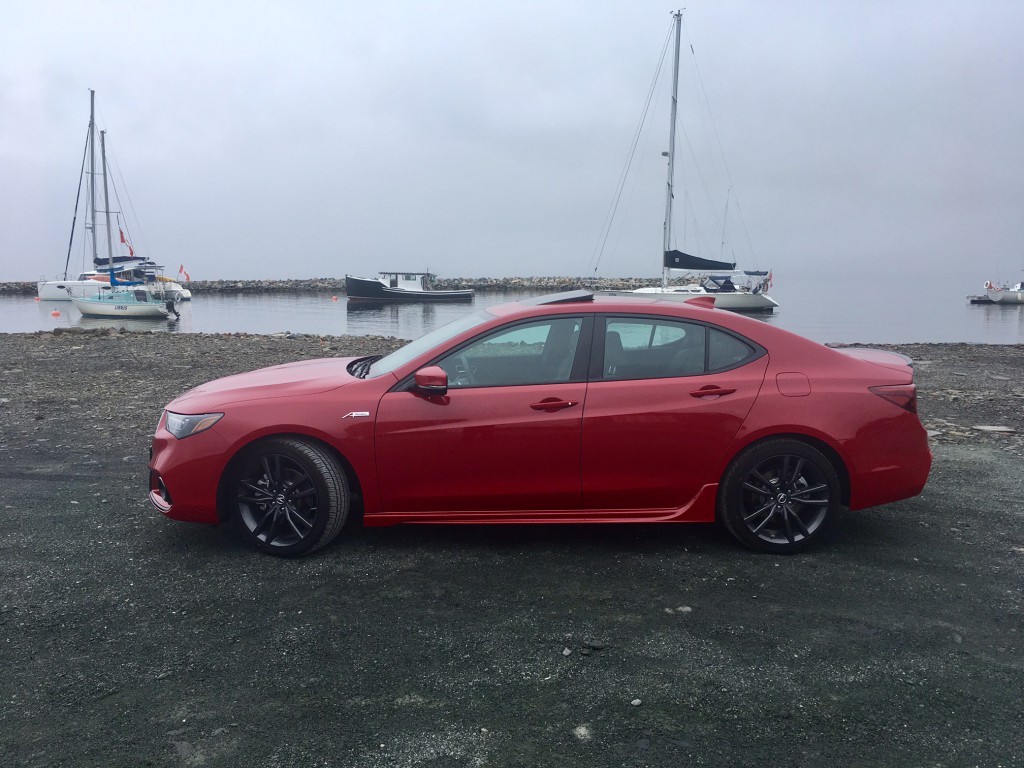 The end result with the 3.5 is a capable machine that remains tame until you stomp on the gas. The TLX never pulls away with any sort of gusto, rather it chooses to save that for the upper rev range. This engine likes to be pushed and it will give you a pleasant audible growl as a thank you when you do. The throttle response can be weighted by keeping it in sport mode, though cycling through the modes isn’t something you can do without looking. The button is located right below the gear shift which is also buttons. If you try to push it without looking, you might hit one of the buttons for the gear shift, or even the econ button. 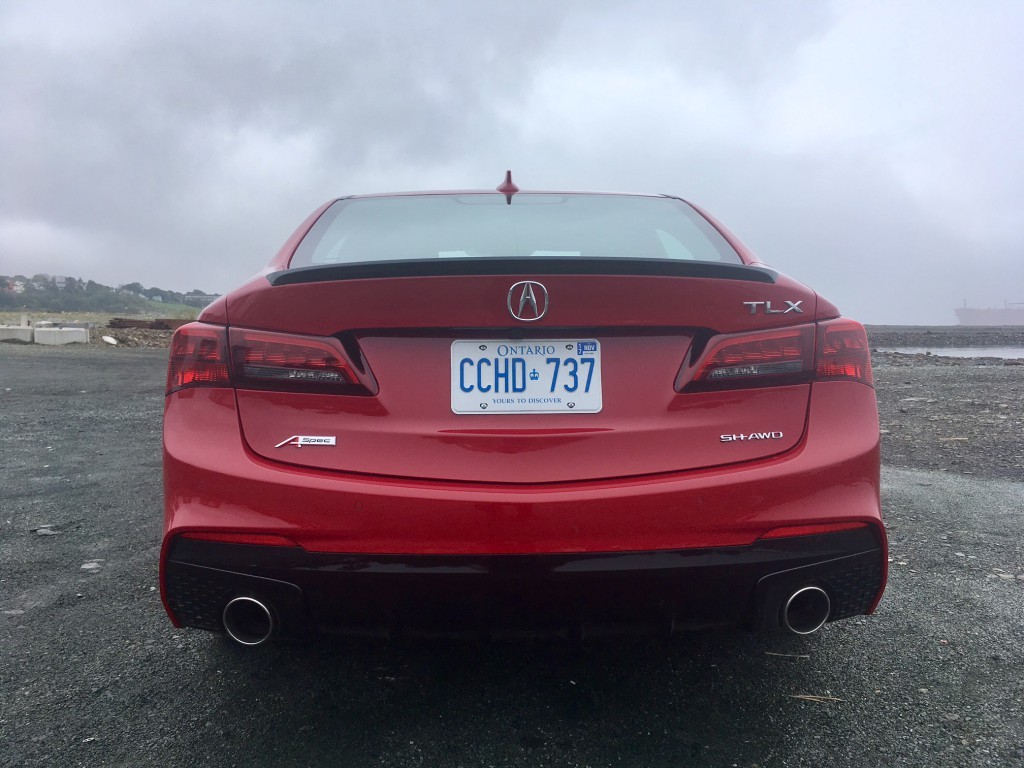 As mentioned, the TLX is on the larger side of the sport sedan segment and you can certainly feel it when you drive, however it never feels cumbersome or clumsy. In fact, the A-spec trim enhances suspension and the SH-AWD (Super Handling All-Wheel Drive) system helps to keep the TLX planted and nimble. The system uses torque vectoring, which essentially direct toque to one or both rear wheels which creates an almost 4-wheel steering effect. It’s not the sharpest handling car I’ve ever driven, but you can certainly feel the system working when pushed, and it does its job well. 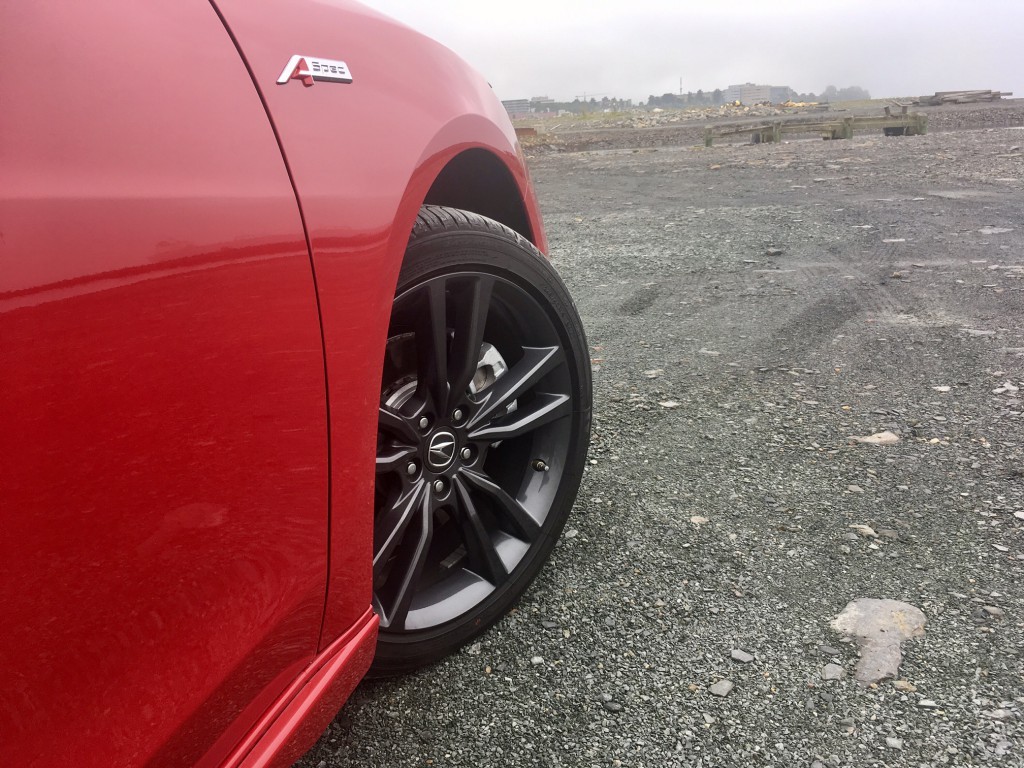 Despite my criticisms, the TLX is a fairly impressive vehicle. The more time I spent with it, the more it charming it became. It was to the point where I didn’t really want to give back the keys, and that is something that is a rarity.

When I bought my first CL in my university days, I bought with my head. But the new TLX just might be one of those cars you buy with your heart. 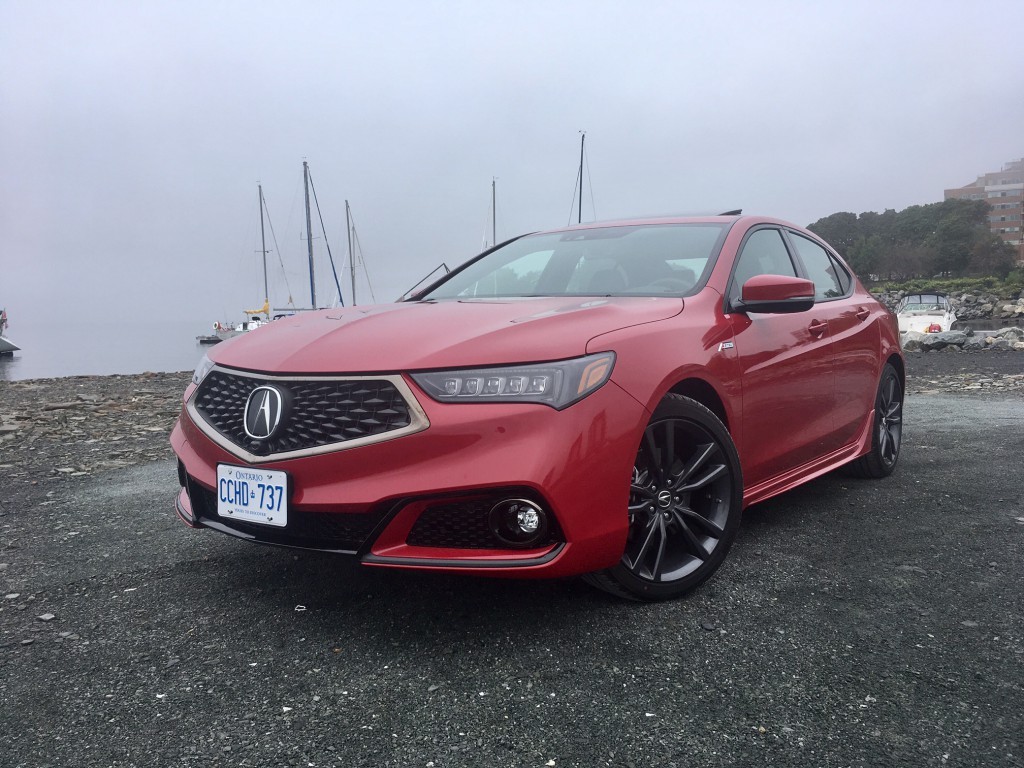