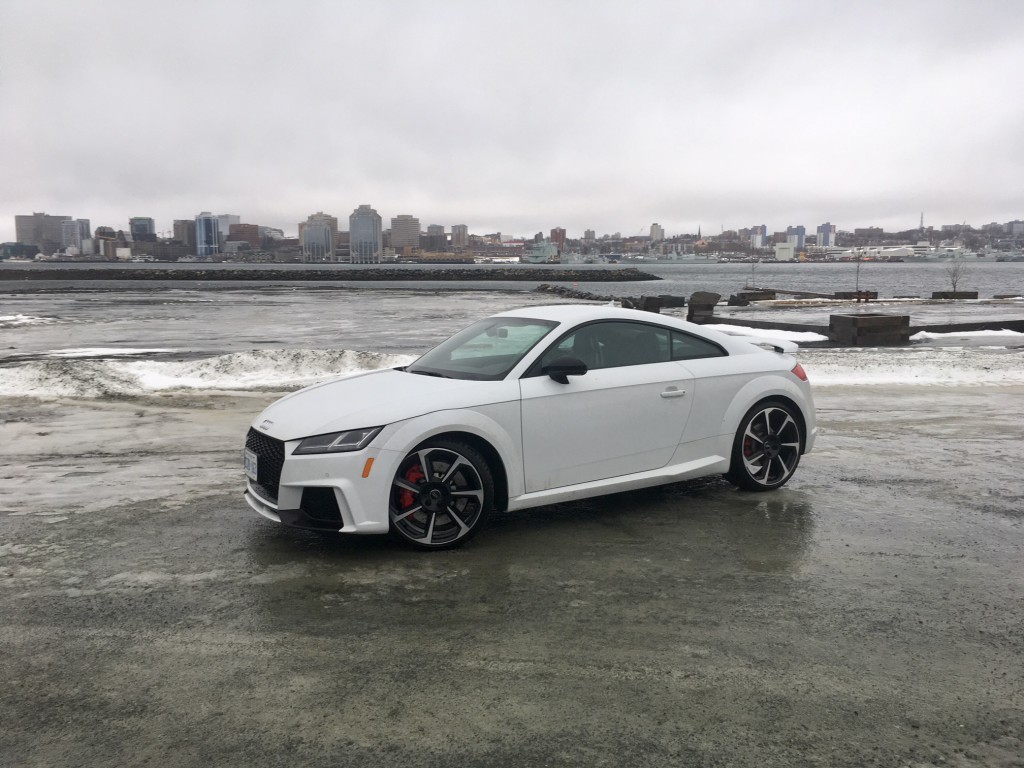 Hmm, it appears I have a bit of a hypothetical dilemma on my hands.

Late last year I reviewed the new Audi RS3 and, after having driven it, I explained how relieved I was that I didn’t trade my car for an S3. The RS3 is markedly better in almost every way. On top of its impressive performance credentials is the fact that the RS3 is certainly more versatile than my current BMW 1-series what with its extra set of doors. It also offers a fairly compliant ride for daily driving, decent fuel consumption and lots of new tech.

But now Audi Canada has gone and sent me the TT RS to try, which is even better. On top of it, my fiancée has told me that when and if (huge emphasis on ‘if’, still quite happy with my current ride) I decide to replace my 1-series, I shouldn’t be overly concerned about getting a practical vehicle. She says her large Ford Fusion can take on typical daily driving duties when needed. In other words, she practically told me I should get another sports car.

I bet you can understand why I’m going to marry her.

So therein lies the dilemma. Would I get the cheaper and more practical RS3, or the quicker and better looking TT RS, especially when it’s already future-wife approved? 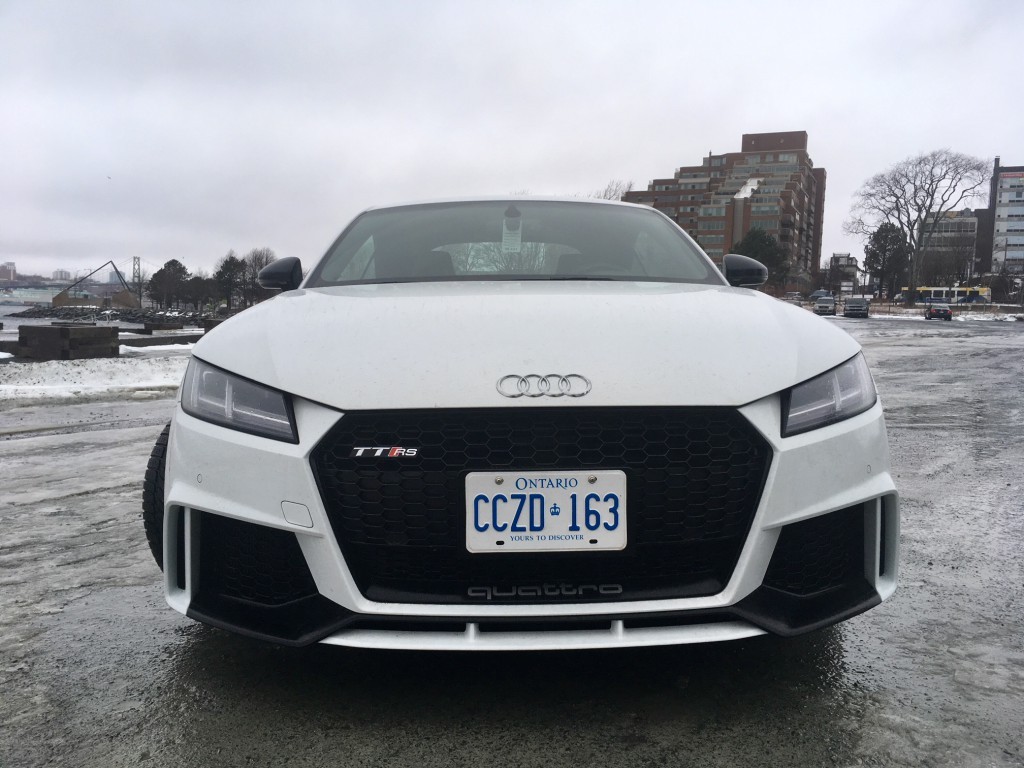 Well let’s start with those looks, as I tend to do in new car reviews. This thing catches the eye of passersby more than a standard TT or even a TTS (which I also reviewed last year). While those in the know would likely recognize an RS from across the street, the optional 20-inch wheels, back optics package, ‘Quattro’ insignia on the lower front lop and signature RS pipes in the back helped more normal folk to take notice. Either that, or it was the tremendous symphony that came out of those rear pipes. For the record, my tester was fitted with an optional sport exhaust ($850) which opens up the valves at the touch of a button to make sure people hear you as you pass by. Yes, it is entirely gimmicky, entirely unnecessary and entirely showy, but you better believe I hit this button almost every single time I drove it, solely for my own audible pleasure. Speaking of unnecessary, my tester also came with optional Organic Light Emitting Diode (OLED) tail lights – the latest in lighting technology. But with it being a $1,200 option along with not a single person noticing the difference between it and the standard LEDs, you’ll want to make sure to omit it when ordering your TT RS. 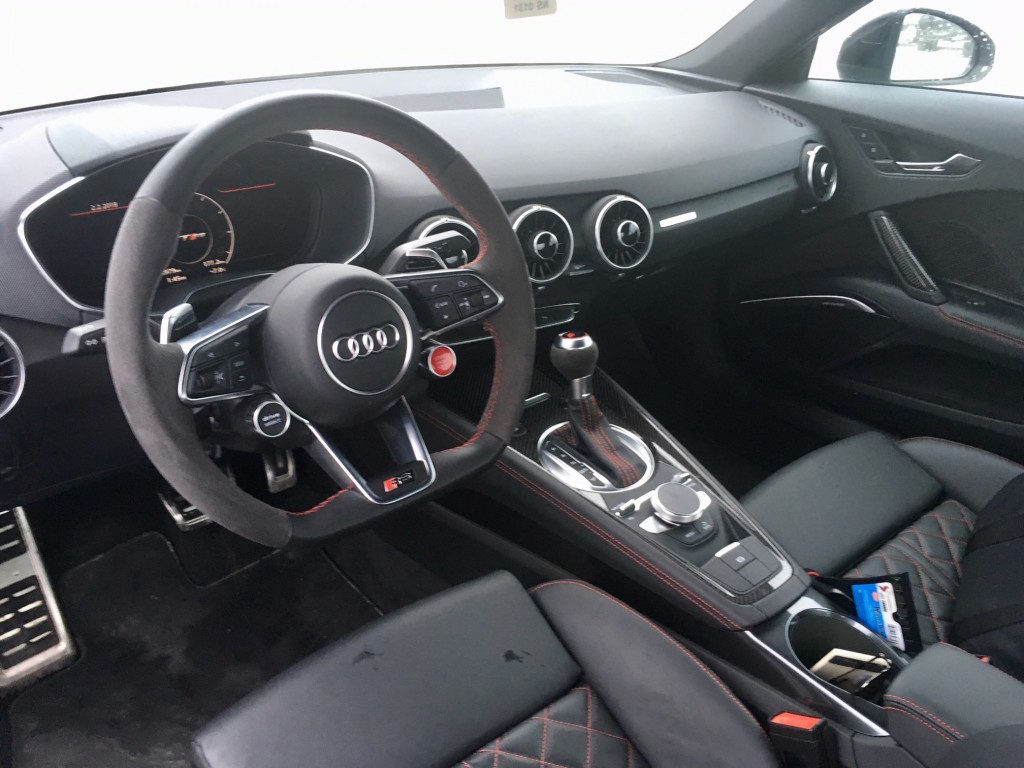 Inside you’ll find a driver centric cabin which features everything you need directly behind the steering wheel. That means a completely configurable12.3 inch LCD display, which allows you to modify the look and customize prominence to information i.e you can have the rev counter as the focal point, or you can have the navigation map as the focal point, along with everything in between. This eliminates the need for a screen on the centre stack, which may annoy your passenger who may want to change the radio station. Everything is angled towards the driver with the exception of the volume and tuning button which is actually fairly out of reach. The buttons which control climate and heated seats are neatly tucked in the centre of the air vents. You’ll also get a steering wheel yanked directly from the $185,000 R8. That means you’ll get the push-start button for the ignition right on the wheel itself along with a button to switch driving modes. The RS3 doesn’t have this feature, FYI. 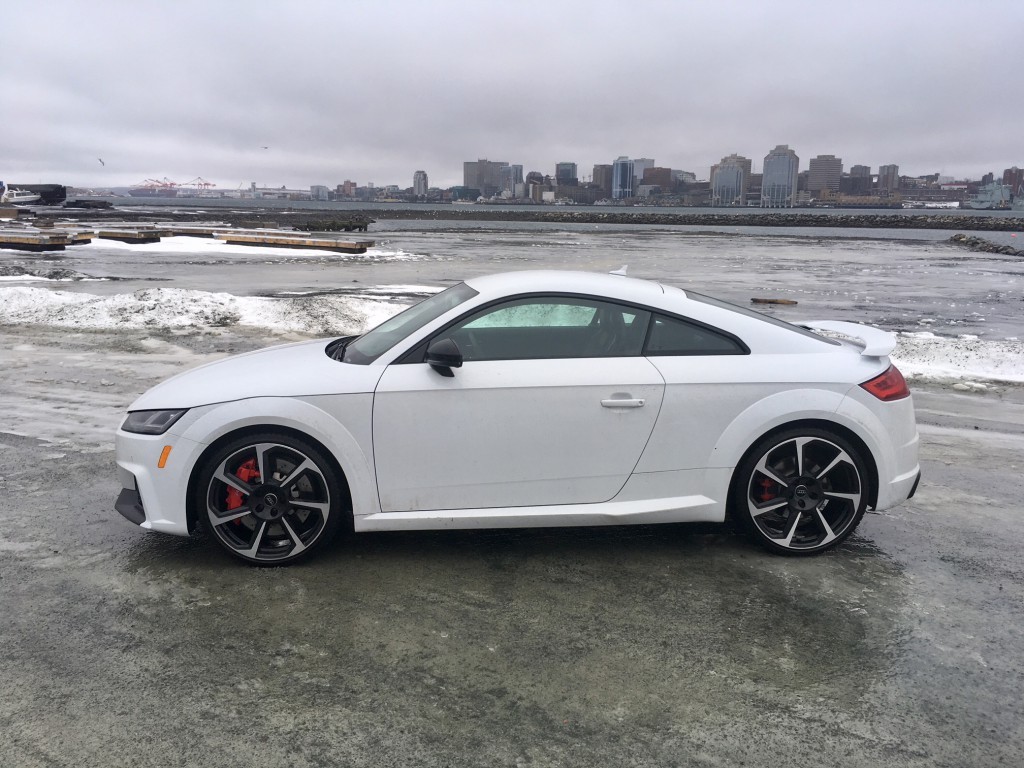 Outward visibility is surprisingly good, though checking blind spots is a bit more challenging with a fairly thick B-pillar. The cabin itself is small and even though no sunroof is available to ease any feelings of claustrophobia, the TT RS is wide and it feels it inside as well. There are technically rear seats but there is truly no way to treat them as such; they’re better off being used as a place to store your jacket or your bag. Better yet, just keep them folded down for increased cargo room which, by the way, isn’t bad at all for the class. Cargo space is shallow but you can still net 12 cubic feet of space with the seats up. 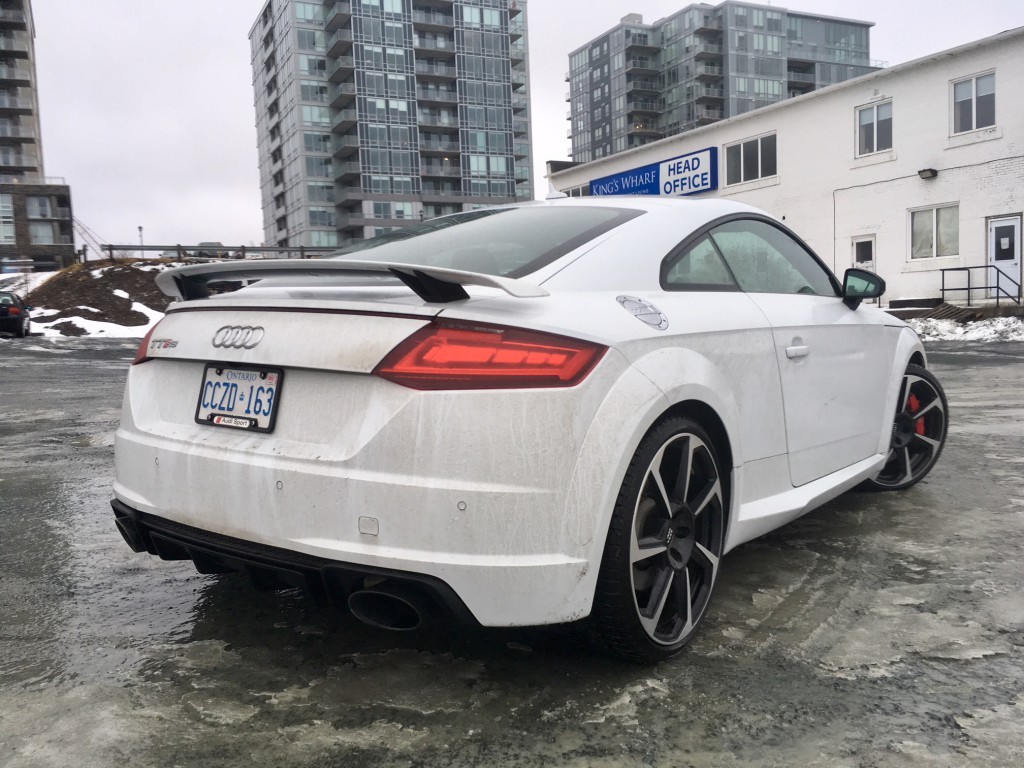 As you would imagine, the TT RS is a low slung vehicle and since those tires are pretty much painted into the rims, ride comfort isn’t necessarily its forte though I would hazard to say most will still find it surprisingly comfortable for the type of vehicle it is, with my fiancée being one of those people. When she was a passenger in the car, I normally kept it in ‘comfort’ mode, but she also experienced dynamic mode, which stiffens the suspension among other things, and she still said it wasn’t bone-jarring or anything and was certainly tolerable for shorter trips. 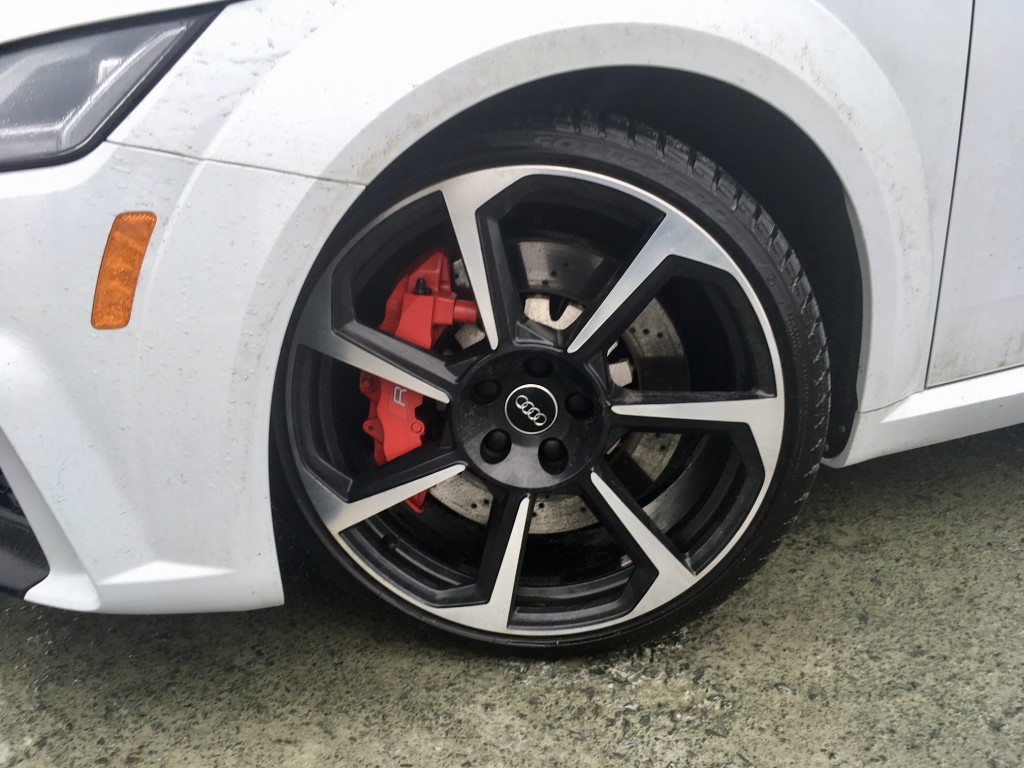 Power comes from a fairly unique turbocharged 2.5 litre 5-cylinder which emits a borderline perfect imitation of a V8. It also produces a healthy 400 horsepower and 354 pound foot torque mated to a 7-speed direct-shift automatic. This engine/transmission combo is among the best I’ve experienced – the two seem to be more perfect for each other than Tessa Virtue and Scott Moir. Shifts are quick and crisp and when left to its own devices the transmission usually shifts at just the right moments, of course depending on which drive mode you’re in. 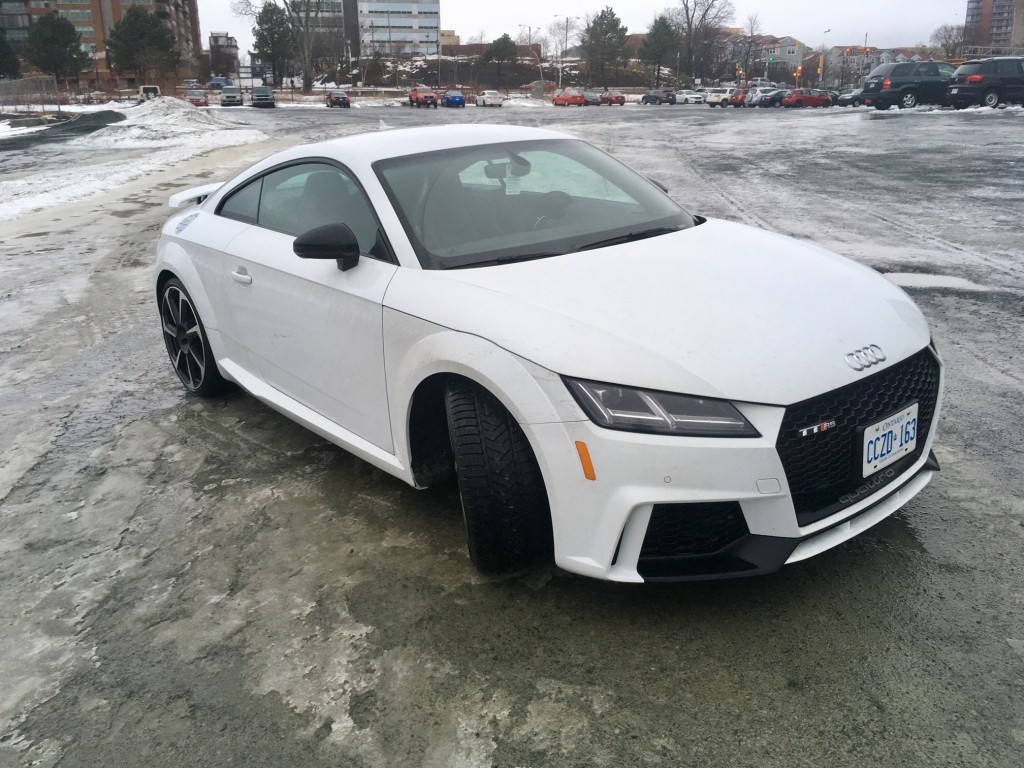 The TT RS also features launch control which, if properly used, can catapult it from 0 to 100 in 3.7 seconds. For the record, the RS3 gets you up to the same speed in 3.9 seconds. The reason why the TT RS is able to get there quicker is thanks to the launch control and also less weight, though in the real world that 0.2 second different isn’t noticeable at all. I would say the RS3 felt just as quick. However, let’s be careful not to gloss over that 3.7 figure because here is a list of cars that also go from 0 to 100 in the same amount of time:

It goes without saying that that is an impressive list of cars to be included on and most of those cars sold in the six figure range when new. Even with my tester being nearly fully loaded, it’s still 20 grand shy of six figures. 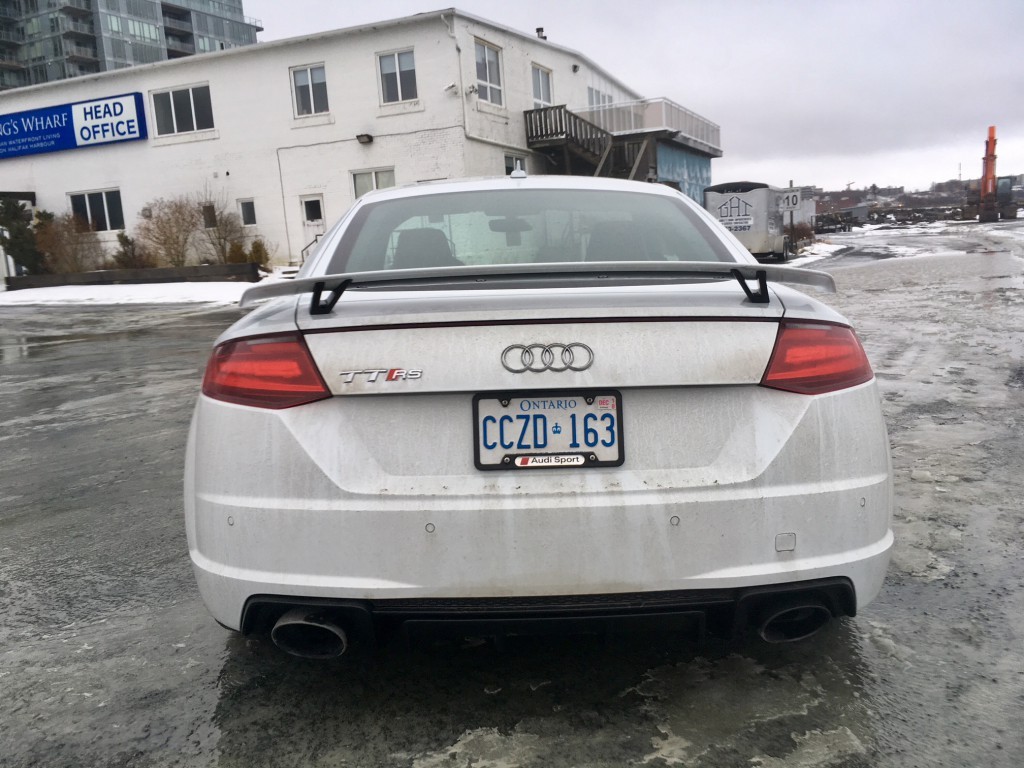 Just as impressive is the TT RS’s handling credentials. Steering feedback is well dialed-in making for direct turn-ins complimented by a compliant suspension with grip for days, even when fitted with winter tires. Body roll is mostly a non-factor but if you reach its limit (which is hard to get to, by the way) the RS will indeed demonstrate some fairly significant understeer once the grip is lost. On public roads, this is be a non-factor but if you plan on taking it to the track, it’s something to be mindful of. Still, it was able to post a 7:48 time at the Nurburgring. 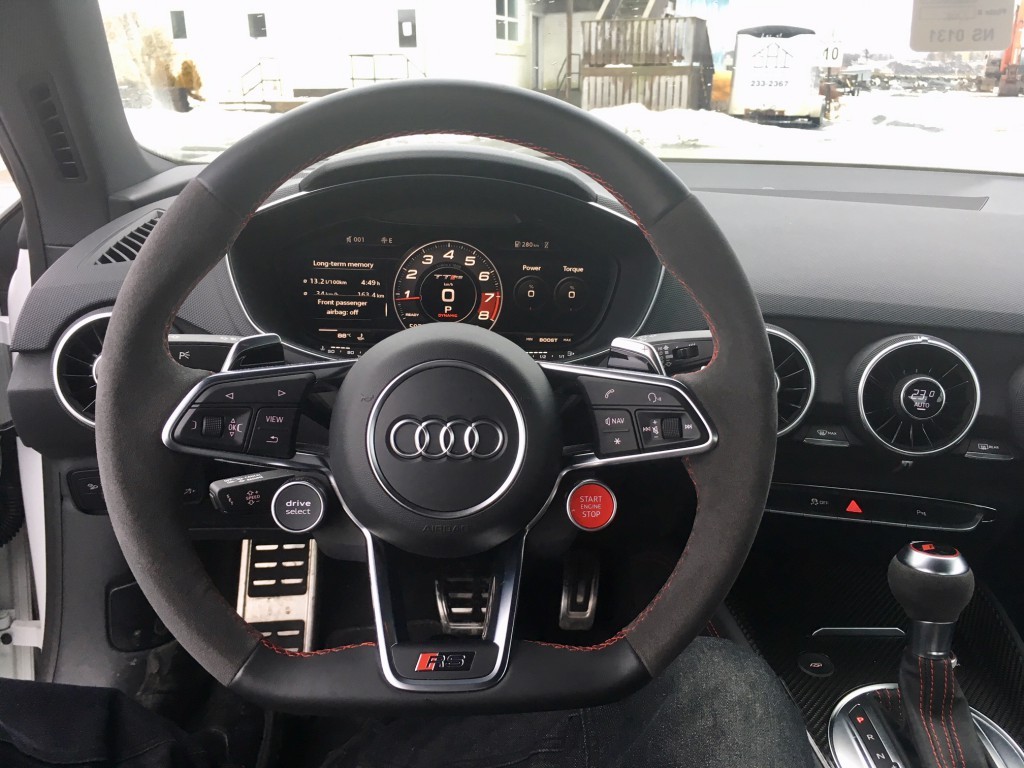 For what it’s worth, the TT RS promises decent fuel consumption figures what with its odd number of cylinders. Officially it comes in at 12.3 L/100 kms city and 8.2 highway. During my week with it, in mixed city-highway driving, I returned 11.7 L/100 kms. Looking back at that list of supercars above, I would bet a lot of money that most wouldn’t come close to that number. 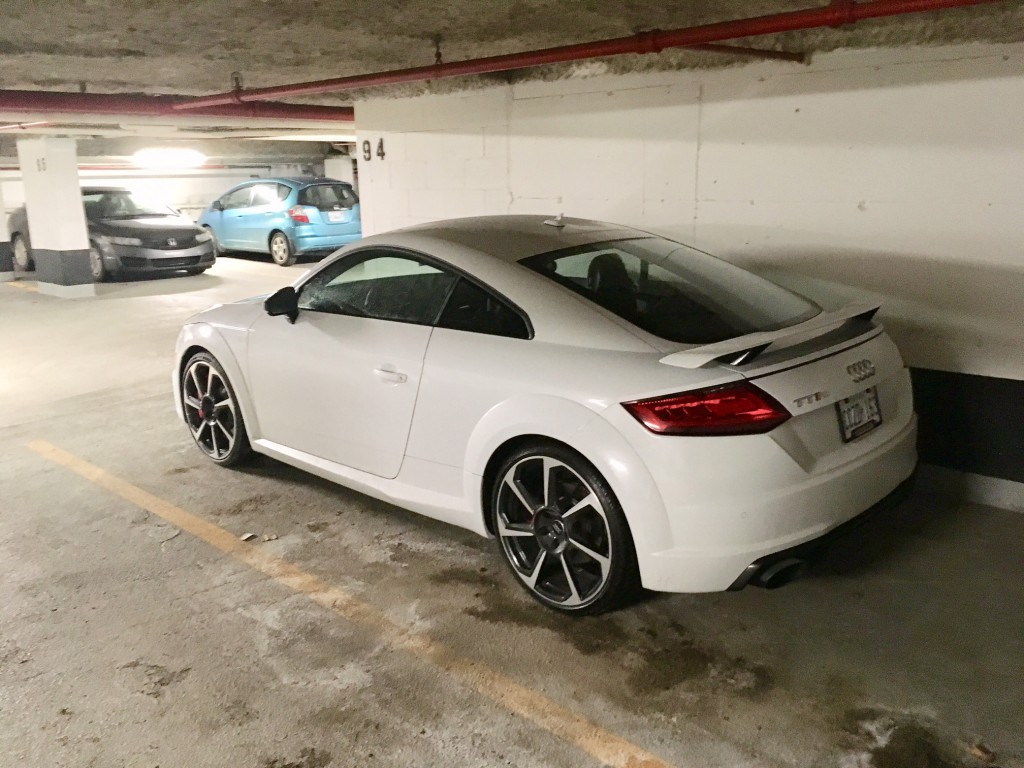 In fact, another car that could easily be added to that list would be within Audis old family. The steadfast R8 actually used to post the same 0-100 time only as far back as 2014. The current V10 R8 can now do it in 3.3 seconds, but it’s also more than double the price. This is where the TT RS starts to make a good measure of sense for value. 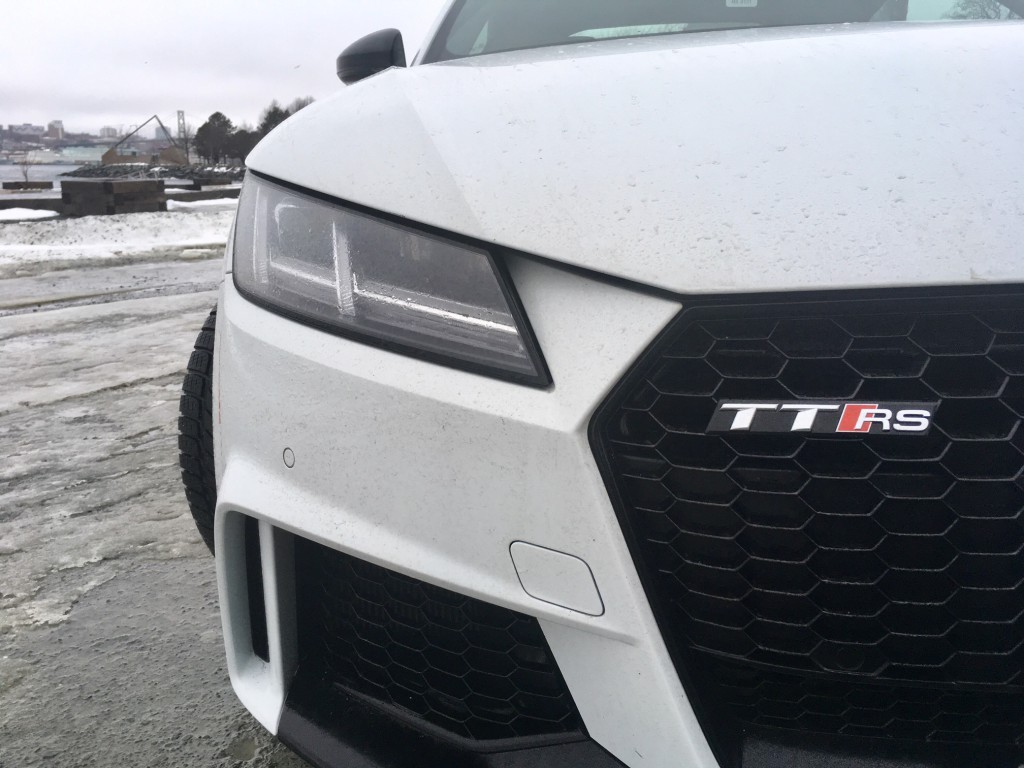 So back to the original question: if I had to choose, would I take the RS3 or the TT RS? Both are in the 70-80 grand range, both have the same engine/transmission, both are lookers within their own right, and both can tear up a track with ease. While the RS3 may be more practical, I can’t help but admit that I felt a tad more enamoured with the TT RS. Perhaps it could be that the RS3 is essentially an A3 on steroids. The TT was meant to be a performance car from the get-go, and it feels it. 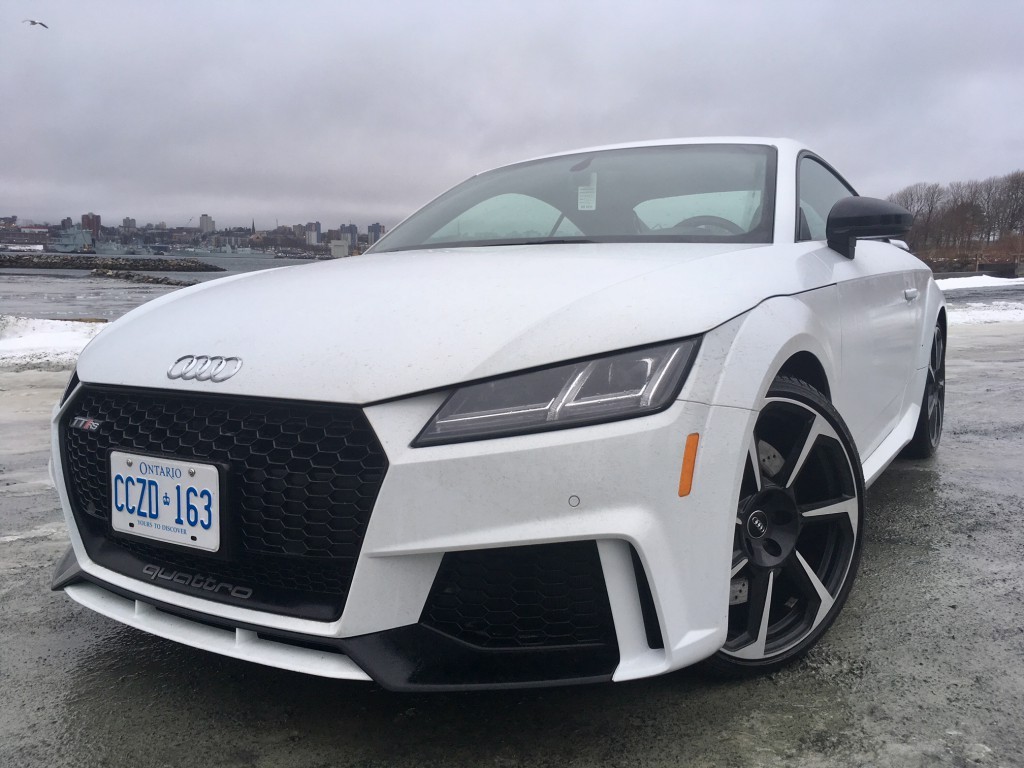 I won’t be trading my trusty 1-series any time soon, but it’s good to know there are still small cars that deliver on performance and value. I can’t think of another vehicle that performs this well, with this amount of eye-catching looks, with this amount of fuel efficiency and usable space for the money.

And if you object to that statement, Porsche Canada, all you have to do is send a Cayman S my way to prove me wrong.