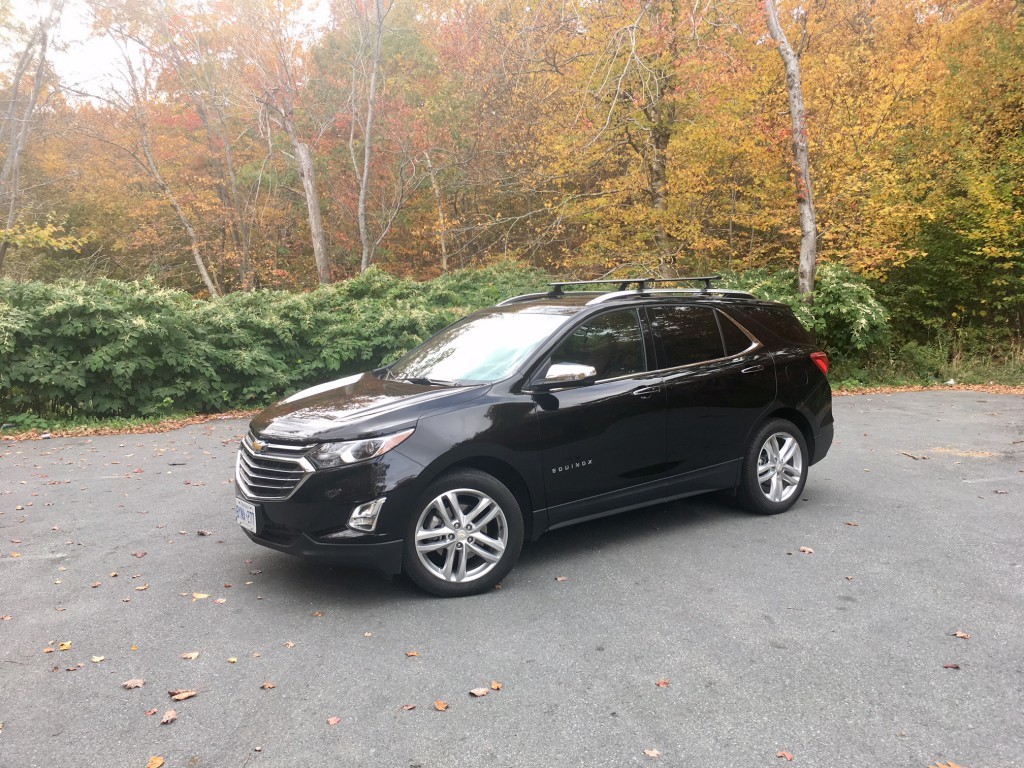 If you watch any sort of competitive cooking show, you likely know that the judges expect the contestants to be creative with the dishes they make. They expect them to take a typical or classic dish and elevate it to something unique and completely tantalizing to the taste buds. Really good, elevated food can incite an emotional response. I once started dancing uncontrollably after trying one of my girlfriend’s dishes, for instance.

When it comes to cars, I’ve never really had any real issues with the Chevrolet Equinox. It was adequate for what it was, but it certainly didn’t evoke an emotional response. Though admittedly, pretty much every family crossover fails to move me in any sort of way.

So when I found out that GM was sending the new Equinox down, I reacted the way you might react if you found out that you’ll be having oatmeal for breakfast: “meh”. 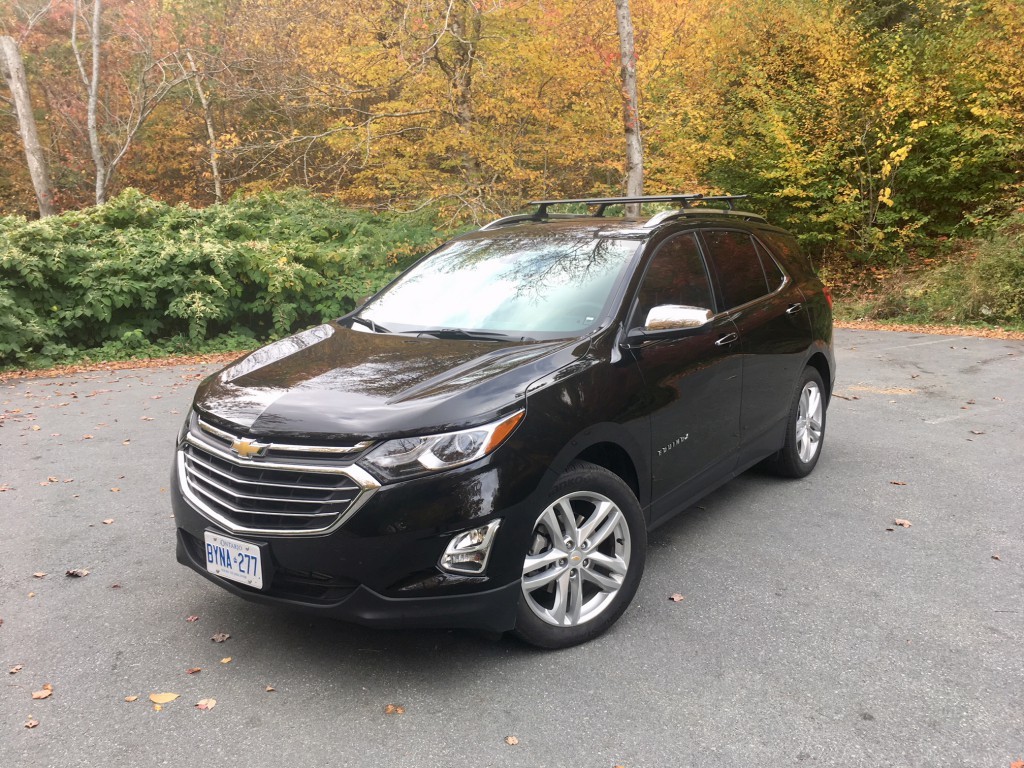 When it arrived, the new Equinox and I didn’t really get off to a good start. The new redesign is decidedly Chevrolet, and while there are some handsome angles here and there, it will easily get lost in a sea of similar shape that no one notices. If you want to be inconspicuous this could be a good thing. But what’s a bit disappointing is that this is not what the 2018 Equinox was supposed to look like originally. You may have seen those irritating commercials where GM asks a focus group their thoughts on a supposed mystery vehicle and they are eventually shocked to learn the vehicle is a Chevy. I’m not suggesting that they are paid actors, but I would hazard to guess that they were likely prompted to say the “right” things, and GM certainly cherry picked the feedback. However, it turns out that GM actually does use focus groups, and the original design of the Equinox rated so low with focus groups that they had to go back to the drawing board. I desperately want to see what the original design looked like, but you can bet that GM has it under tight lock and key. 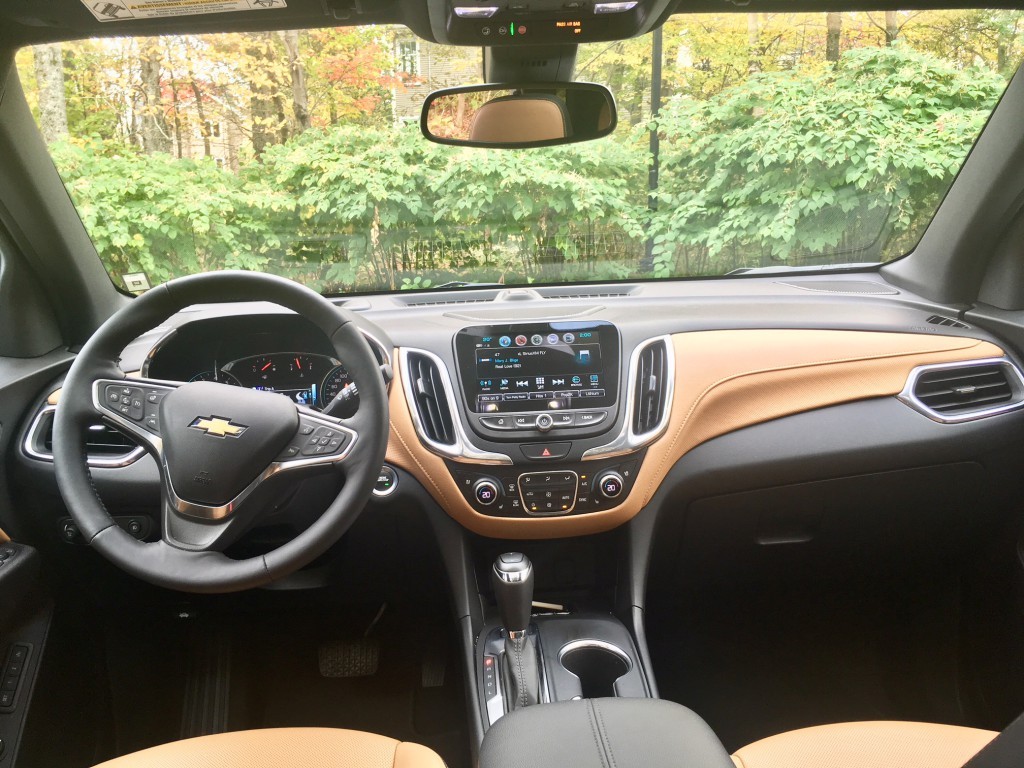 The good news is, while the exterior doesn’t stand out, the interior certainly does and very much in a good way. My Premier tester came with contrasting caramel coloured inserts throughout which made for both a rich look and feel. Quality of materials is impressive and is really only rivaled by Volkswagen at this point. If you step from a previous generation Equinox to this new one, the difference is enormous. 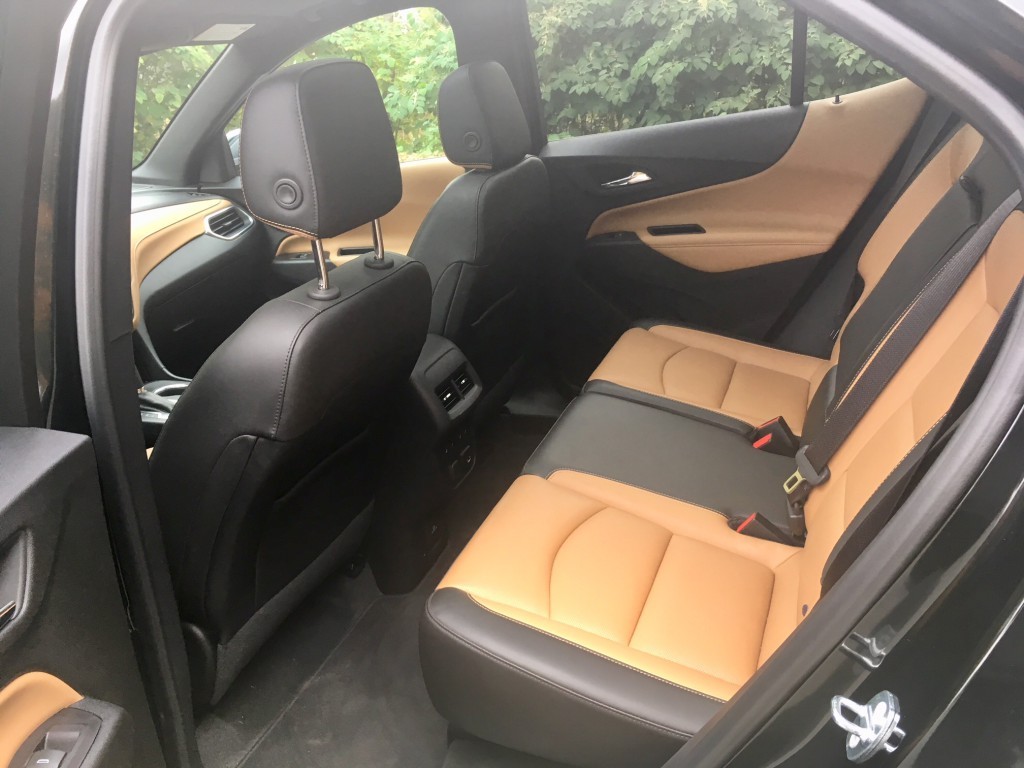 Despite actually being smaller than the outgoing generation Equinox (both in height and length) the Equinox doesn’t appear to lose much, if any, interior room. There’s still more than enough room for most, and this includes cargo room. I was able to fit four large garbage bags full of empty cans and bottles to send off for recycling and there was no need to fold the rear seats down.

As mentioned, quality of materials is top notch, even the plastics (which isn’t present in large numbers) feels solid. The dash layout is simple and attractive. The eight-inch infotainment screen which displays GM’s ‘My Link’ shows information in a clear and logical manner. Response to commands is quick too. You can also sync your phone if you have an Android or an iPhone. 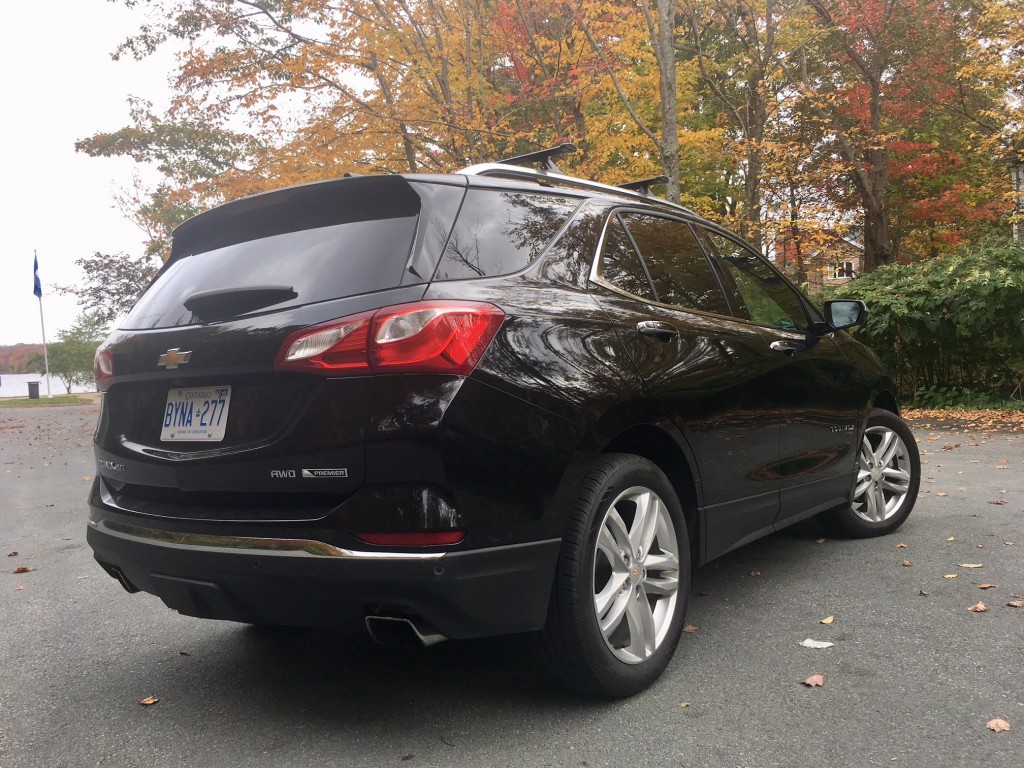 Another neat feature worth mentioning is the 4G wireless hot spot within the vehicle. Not only is this a convenient feature, but it would appear to me to cut down the cost of integrating units into the rear headrests like a lot of manufacturers do. With this feature, for long road trips, you can just give the kids an electronic device, connect them to the network and boom, they’re able to watch Spongebob Square Pants with the ability to control the device themselves. 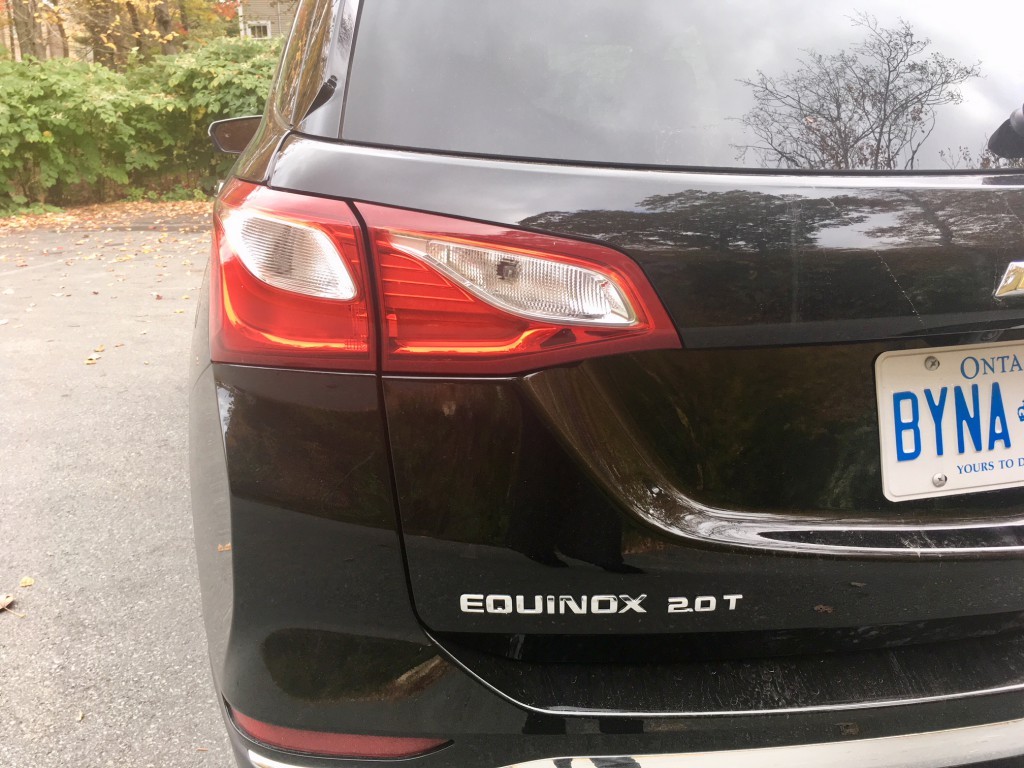 Speaking of kids in the back seat, there is also another feature that reminds you to make sure not to leave them behind. I originally thought this to be quite ridiculous, but since I have no children of my own, and after speaking to parents of whom hold themselves with the utmost responsibility when it comes to their kids, it sounds like this is a good idea. No one ever means to forget to bring their kids left in the back, but increasingly you hear more about it on the news. And with the hectic lifestyle of being a parent, it could be understandable that this mistake occurs now and then. 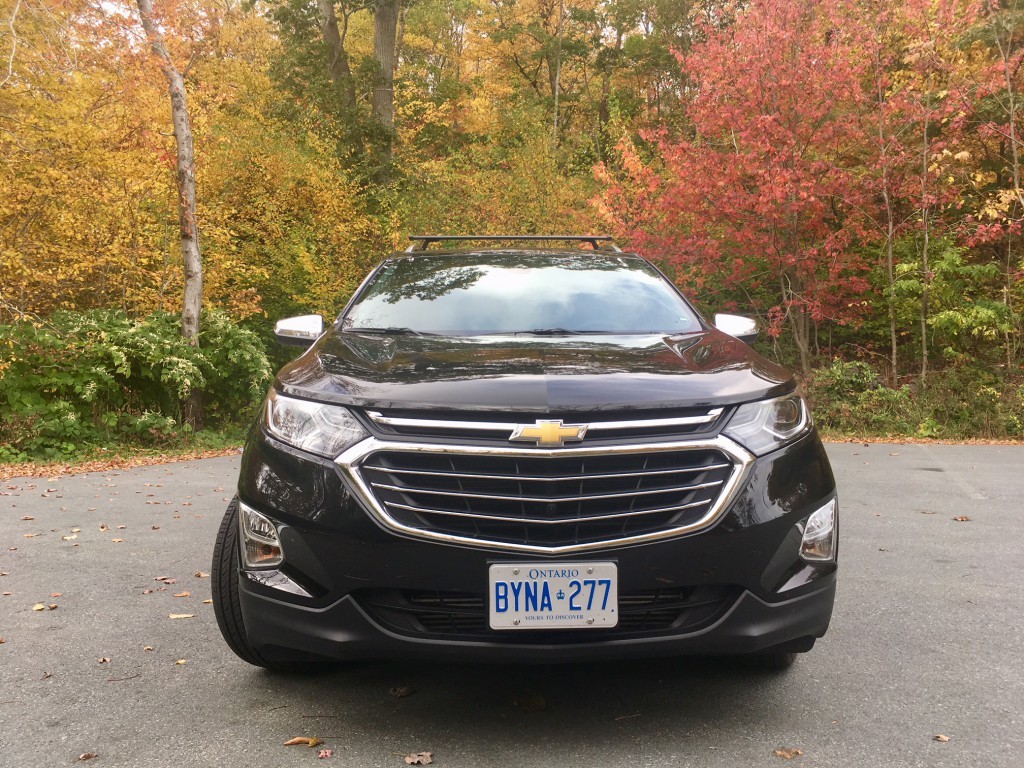 The new Equinox can be had in either front-wheel drive or all-wheel drive and there are three engine options available to choose from: a 2.0 litre turbocharged 4 cylinder, a turbocharged 1.5 litre and a 4 cylinder diesel. My tester came equipped with the former and it’s definitely the engine you want, though the diesel makes an interesting choice. The 2.0 makes 252 horsepower and 260 pound feet of torque mated to a new nine-speed automatic. This marriage definitely won’t end in divorce, the engine and transmission work together brilliantly. The transmission reacts with good instinct to the amount of power being put out by the engine and shifts are always smooth and refined. 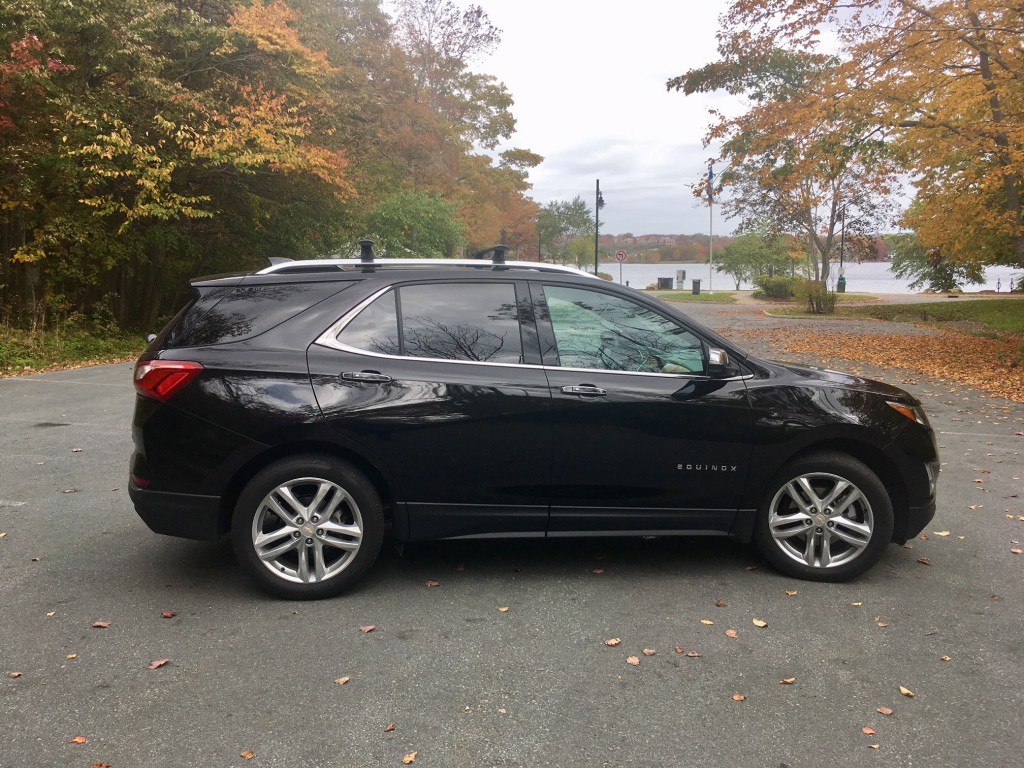 In fact, the whole experience of driving the Equinox could be described as refined. When on the highway, the Equinox does an excellent imitation of vehicles made by the Germans. It feels composed and sure-footed. Thanks to new sound deadening along with the transmission’s willingness to keep the engine at lower RPMs at higher speeds, your long-distance journey quickly turns into a peaceful one. A suite of safety systems were equipped to my tester including blind spot alert and forward collision alert. Strangely omitted was adaptive cruise control, however. 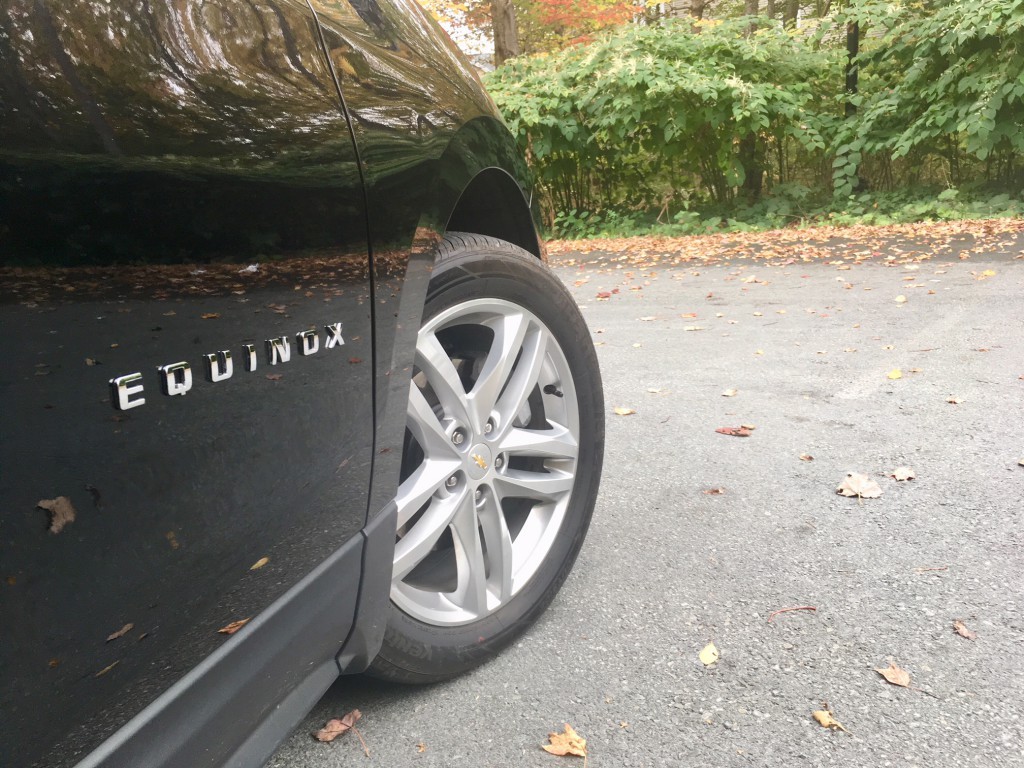 The same could be said for when the Equinox meets city streets, though not quite to the same degree. The 19-inch wheels proved to provide a bit more noticeable firmness on bumps and unexpected potholes. The larger wheels also make for a wider turning radius, which makes parking lot driving a bit trickier than it needs to be. 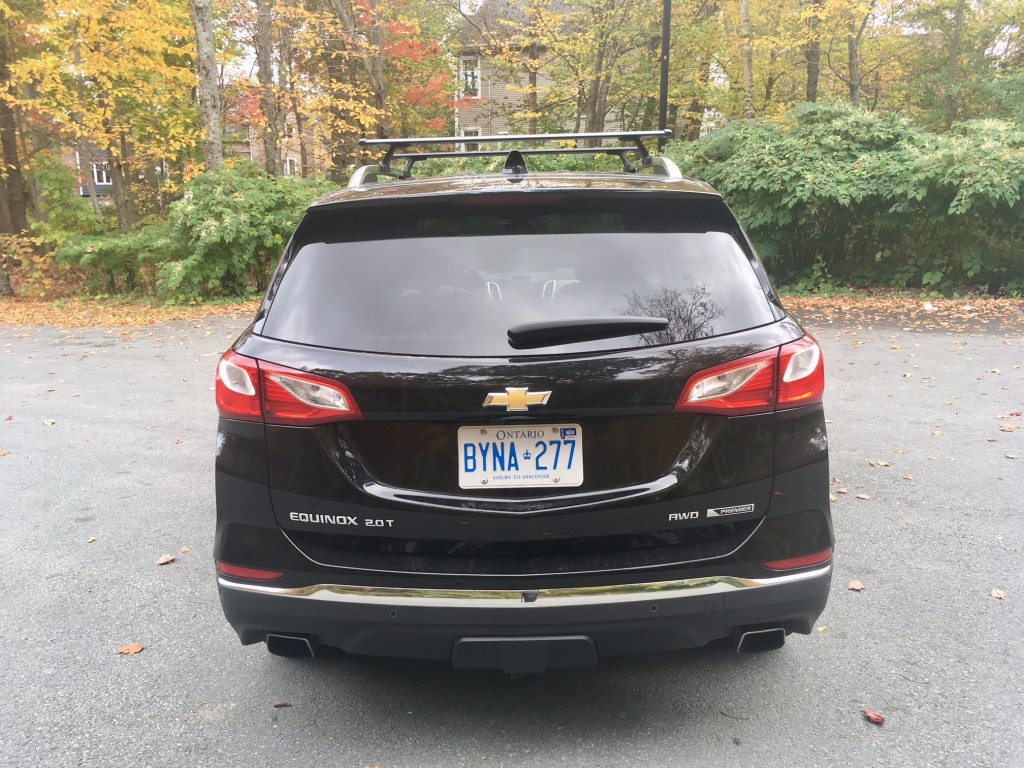 Fuel consumption figures come in at 9.7 L/100 kms combined. In real world driving, I returned exactly that. Considering the amount of power and heft at play, that’s quite good and likely near the top of the segment for efficiency. An added feature which helps out is an automatic start/stop feature. When you come to a complete stop at a red light, for instance, the engine will shut itself off so as to not idle and waste gas (which is of course beneficial to the environment). It then re-engages when you take your foot off the break. In terms of its operation, it’s adequate – not the best I’ve experienced but also not the worst. However, for some, a downside is that the system cannot be switched off. 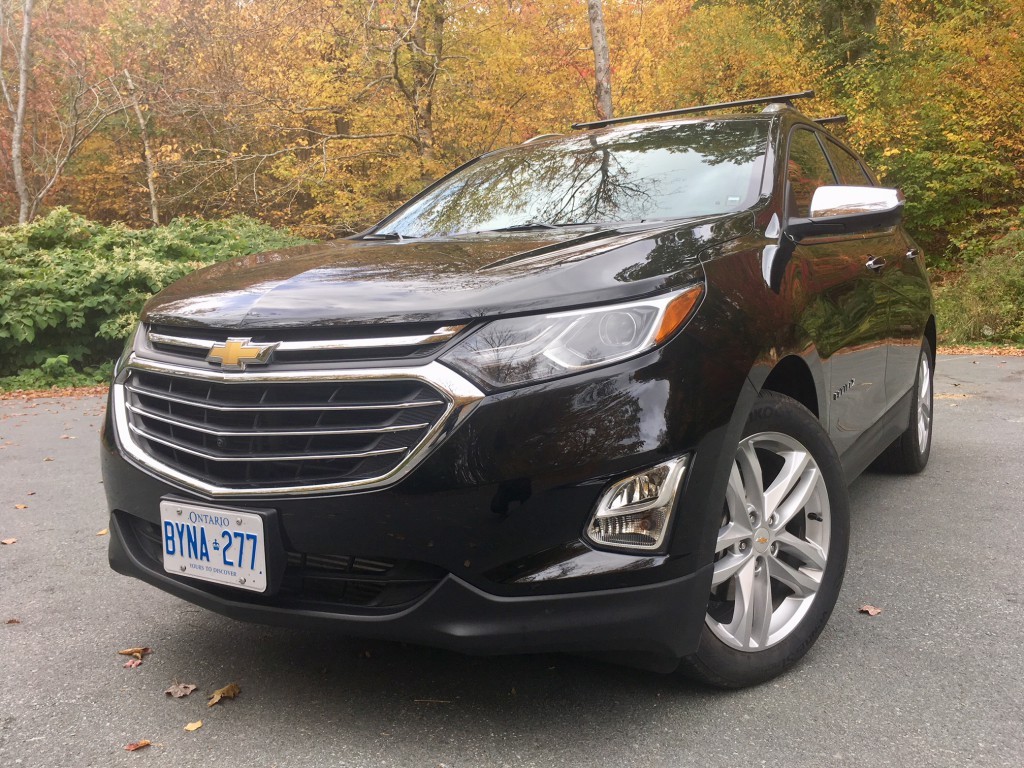 But there were few complaints during my time with the new Equinox. It seems that, like the contestants on competitive cooking shows, GM was able to elevate the compact family crossover from what it originally was. It feels first-class.

Now instead of being a beef burrito from Taco Bell, the 2018 Equinox is an ahi tuna taco with mango avocado salsa, jalapeno and freshly squeezed lime juice. Well done, GM, you’re safe from elimination and move onto the next round.