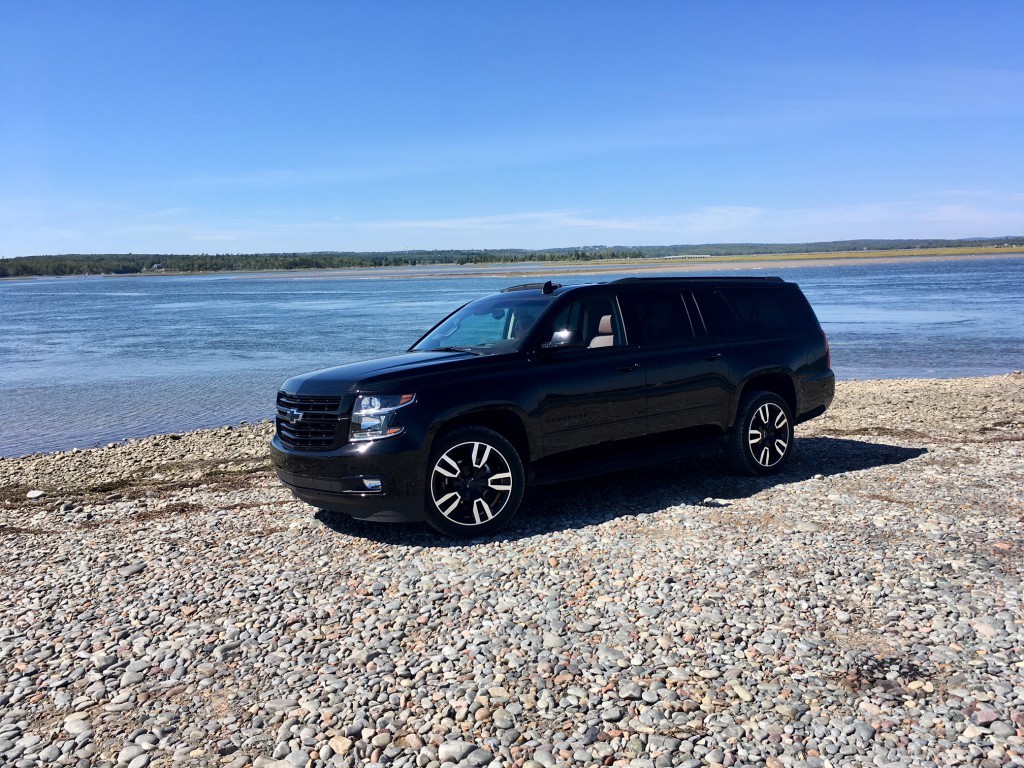 There are some vehicles that are appealing without any real reason. Take the Chevrolet Suburban for example. There’s something quite appealing about it.

It could be the fact that, during my time with the latest iteration of the big beast, people seemed to assume I was a police officer in an unmarked police vehicle. That sure helped to clear the left lane of slow pokes and to clear the path ahead in general. It also made everyone around me behave themselves.

It could also be that this is the type of vehicle typically used to chauffeur celebrities and politicians. In fact, Prime Minister Justin Trudeau relies on a big black Suburban to get around.

Whatever it is, this is a type of vehicle that has appeal. And while this version of the Suburban is starting to reach the end of its life cycle, it still has certain elements that keep it fresh. 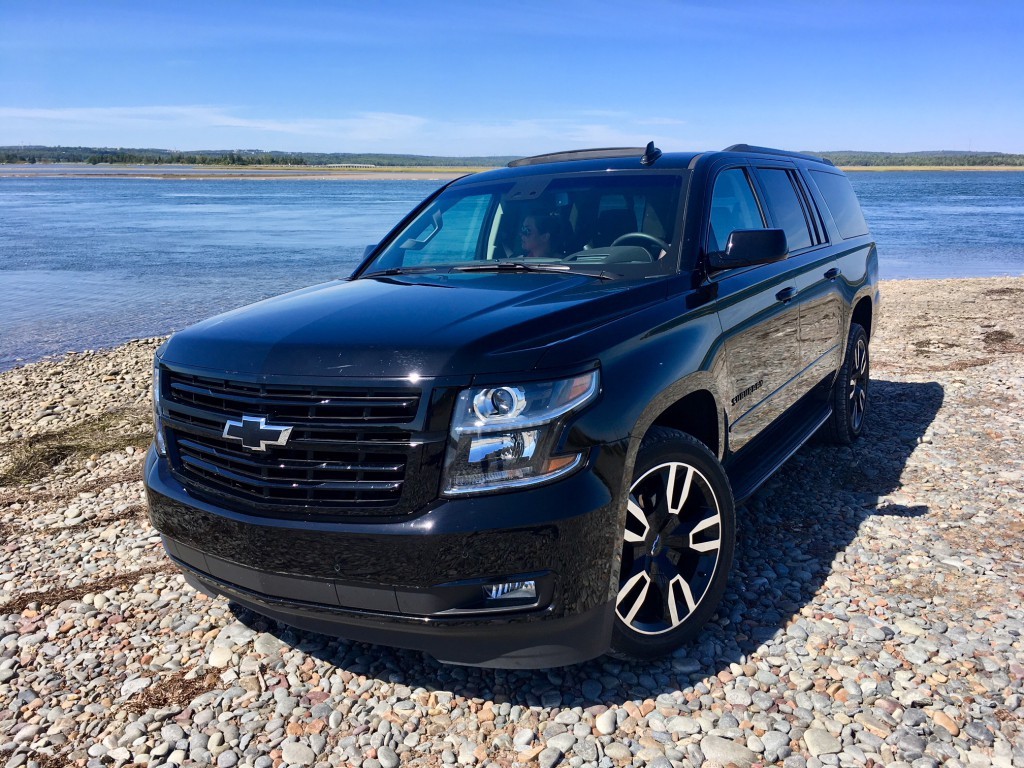 Starting with the exterior, the design largely stays the same, though my tester added black bow ties and badging to the exterior paint (which appropriately enough is just called ‘black’), and it was also fitted with the RST Edition package which, among other things, includes 22-inch wheels that catch the attention of pretty much everyone. They are the best looking wheels of the lot to choose from, and believe me, there are plenty of rims to choose from. My only real gripes about the looks are what you get for the price. For close to 90 grand, I’d expect all lighting to be LED. In fact, only the tail lights are LED. The brake lights and turn signals are incandescent and while the headlights are at least HID, that’s an old form of lighting technology. I mean, even Toyota Corollas get standard LED headlights these days. 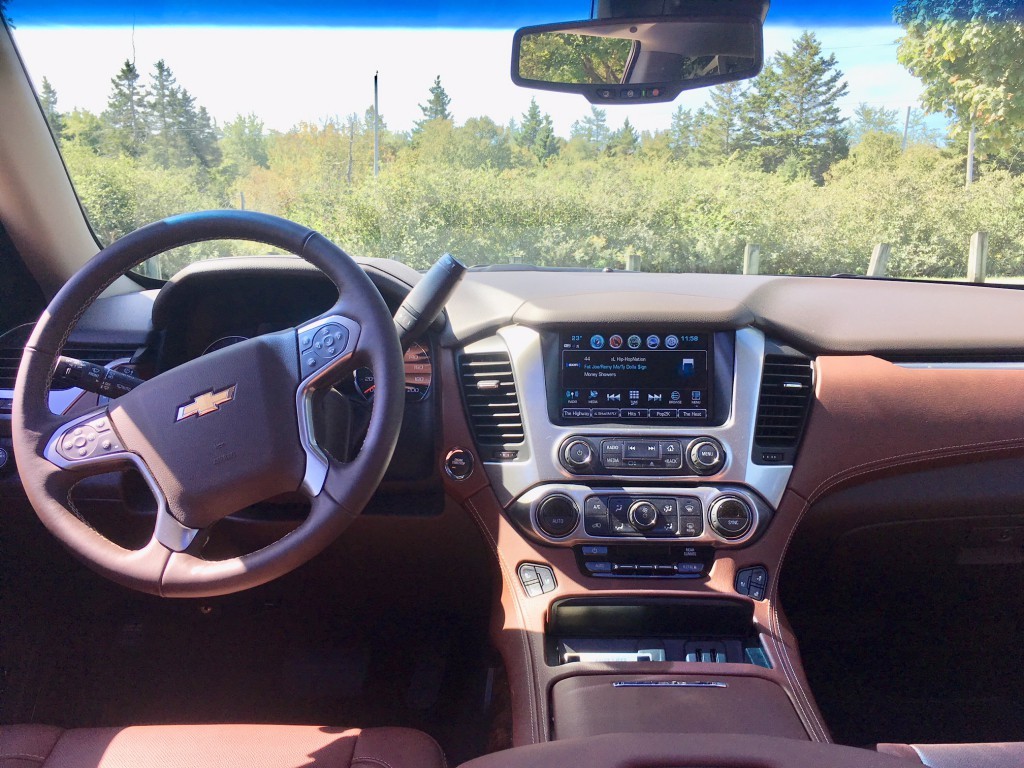 Inside you’ll find a tastefully simplistic design. My tester came with optional cocoa perforated leather surfaces which made for plush, comfortable seating, which is both heated and cooled. There’s also a heated steering wheel, a head up display, and a suite of safety features including blind spot monitoring and adaptive cruise control. All the controls are logically laid out and easy to use. 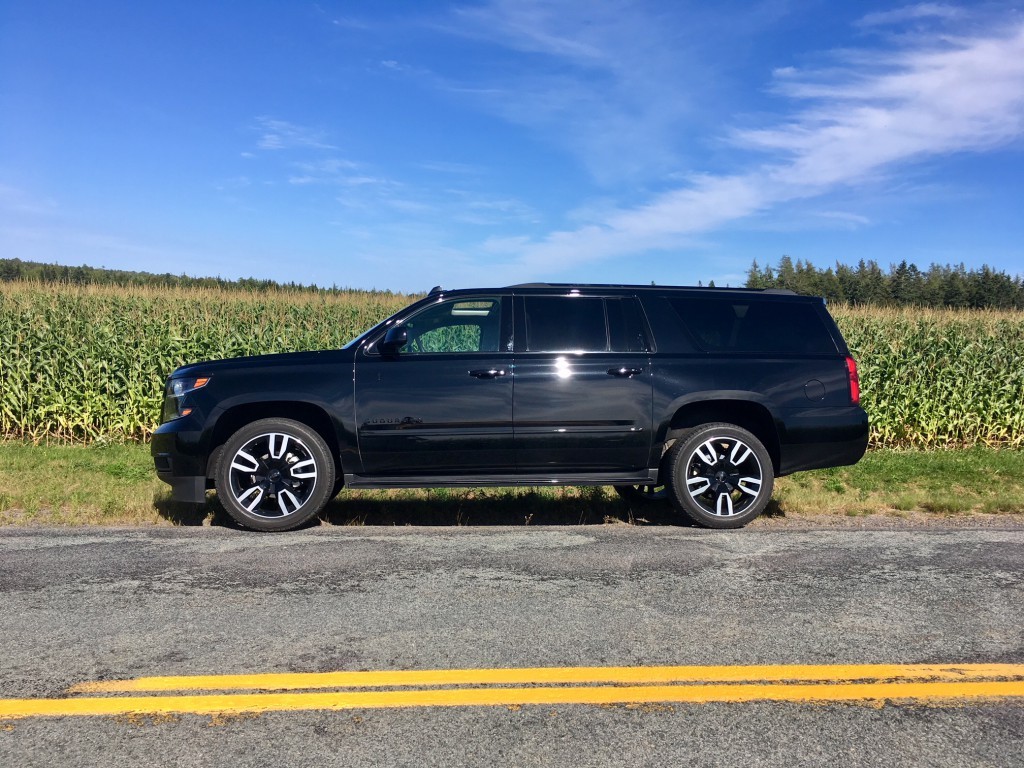 As you’d expect in a vehicle of this size, the Suburban offers mass amounts of room for all passengers and lots of cubbies for storage. The storage between the centre console, for instance, could probably fit a whole Thanksgiving Day turkey. 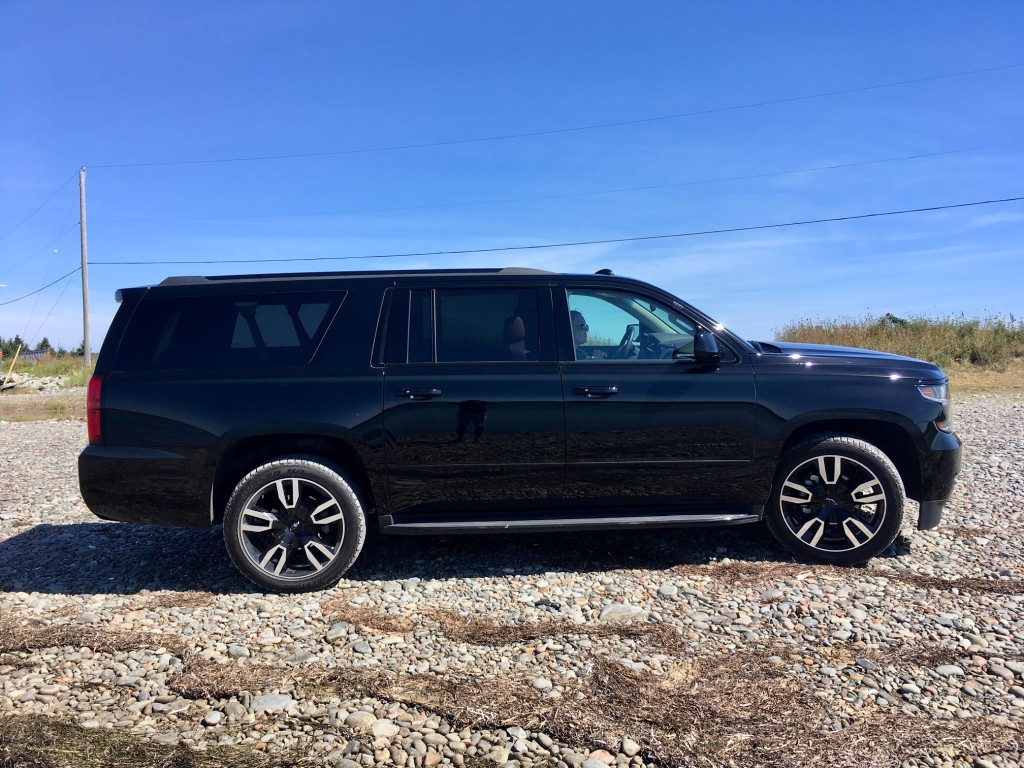 But perhaps the biggest reason why someone might buy a vehicle this big is for hauling stuff. Even with all three rows up seats upright, the Suburban can still swallow over 1,100 litres of stuff, which is around what you’d get in a typical vehicle with the seats down. With all the seats down, you’ll find yourself in position of a stadium with close to 3,500 litres of space available. In other words, don’t worry about packing a tent for camping, just use the Suburban itself as shelter. One issue is the height of the tailgate, which means you have to lift heavier items up more than usual and the load floor itself is quite high as well. 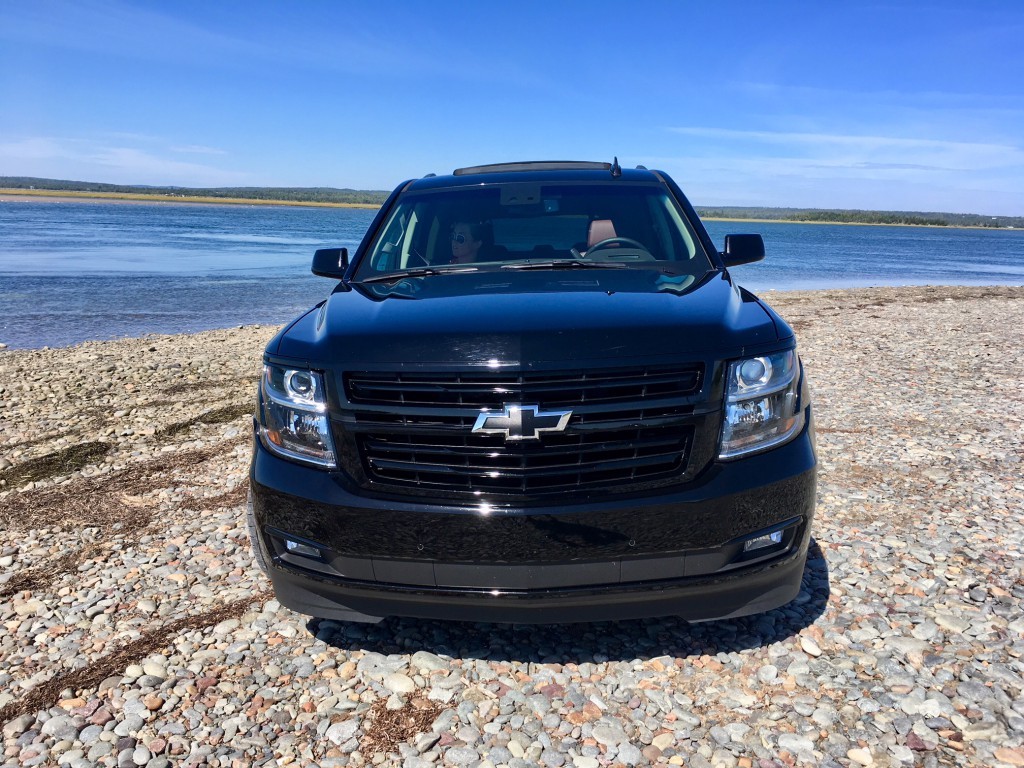 Now, despite the fact that my tester checked off the RST Edition package (RST stands for Rally Street Truck, believe it or not), it gets the same engine as any other Suburban. This package is largely cosmetic. However, if you opt for the Tahoe RST, you’ll get the bigger 6.2 litre V8 mated to a 10-speed automatic. And that bad boy is one hell of an engine. But Suburban drivers will get a 5.3 litre V8 good for 355 horsepower and 383 pound foot torque mated to a six-speed automatic. From the numbers alone, the cheaper Tahoe would seem to have the advantage and I can’t really understand why GM wouldn’t fit out the Suburban with RST package the same way. Still, it’s not as if this V8 is incompetent, in fact it’s power delivery is smooth and linear, but with more weight to carry, the bigger V8 would presumably suit it better. As such, 355 horsepower carrying the Suburban’s gross vehicle weight of 7500 pounds means the Suburban can at times feel sluggish. If you’re going to assign a name as descriptive as ‘Rally Sport Truck’, the drive should at least be suitable to the name. 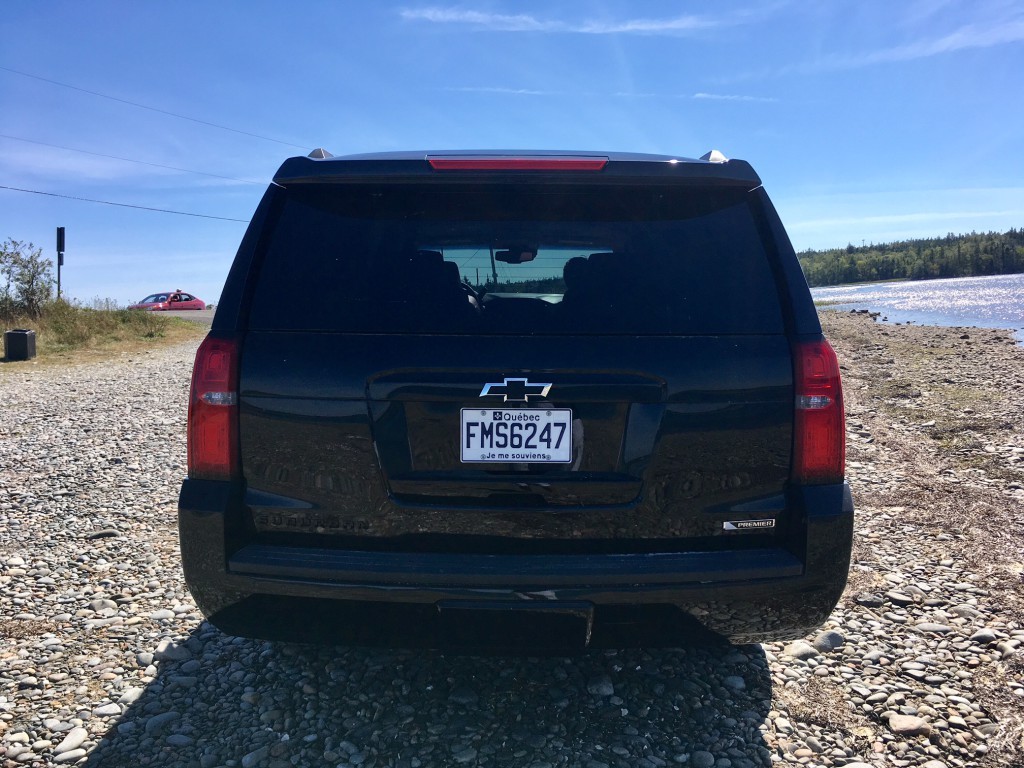 And since we’re talking about rallying, the Suburban is clumsy in the corners. Again, no one should expect a vehicle of this size to take a corner like a Porsche Cayman, but then why go and make a supposed RST Edition? The Suburban is meant to coddle its passengers in comfort, not spill their coffee. Justin Trudeau and Justin Beiber can’t hop out of their chauffeured rides looking like they had a fight with a coffee machine, after all. 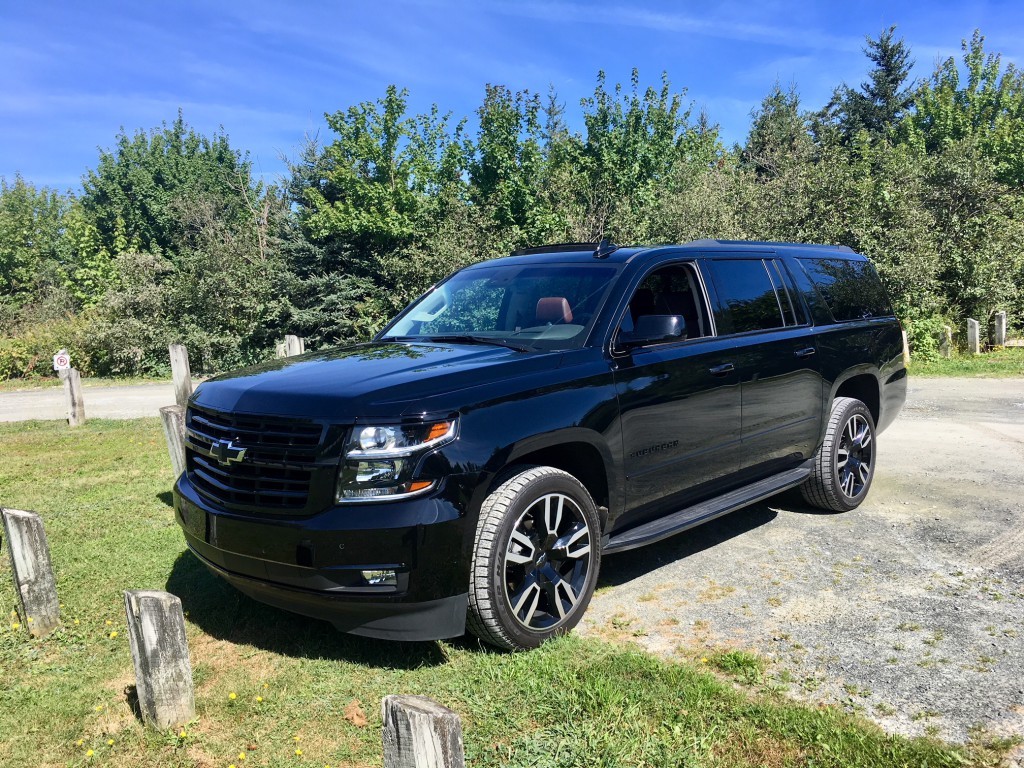 But even with those sizeable 22-inch rims, comfort remains top of mind for all passengers and, having driven its close siblings, the Yukon and Escalade, the ride feels largely the same. I suppose that could be chalked up as a win for the Suburban considering both the Yukon and Escalade command higher premium pricing. However, don’t mistake the Suburban as some sort of Buick-like experience. It’s still based on a truck platform which means it largely drives like a big truck. That means turning the vehicle takes more effort, even though the steering wheel itself is largely light in its feel when operated. It also means you get a column shifter and shoving the shifter into park might be one of the more satisfying things to do in the Suburban. 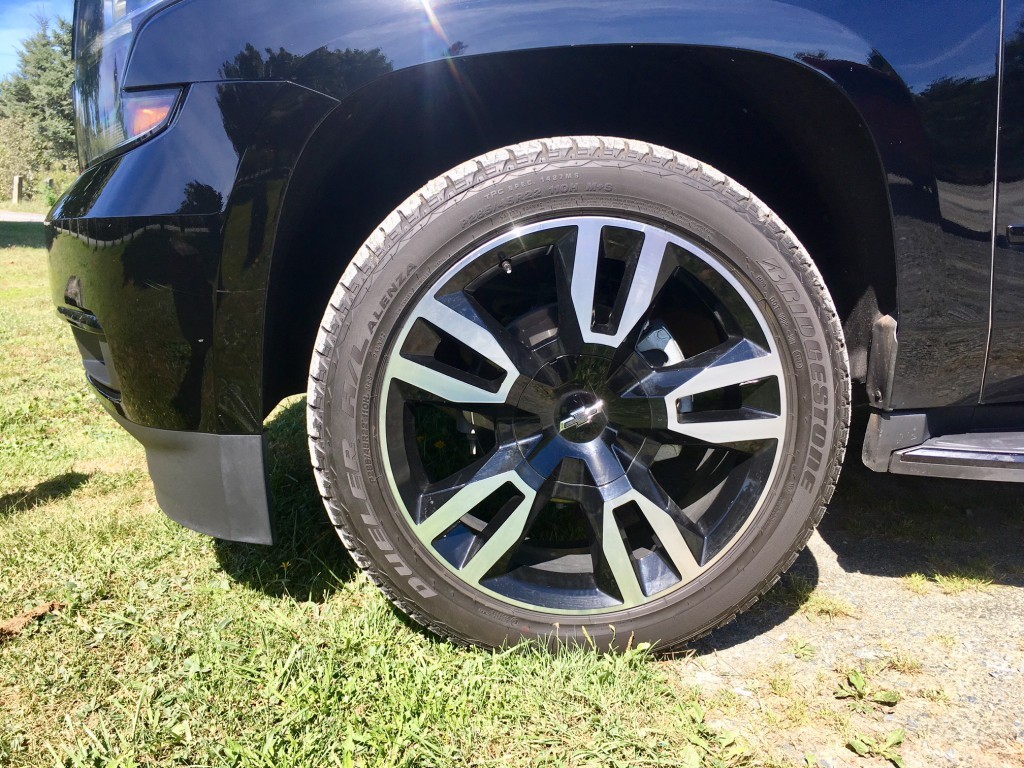 It could certainly benefit from a few more aids for parking. It has a clear review camera, but for this price it would be nice to have a 360 degree view camera and/or different camera angles to choose from. And those tiny side mirrors certainly don’t do much of anything to help. 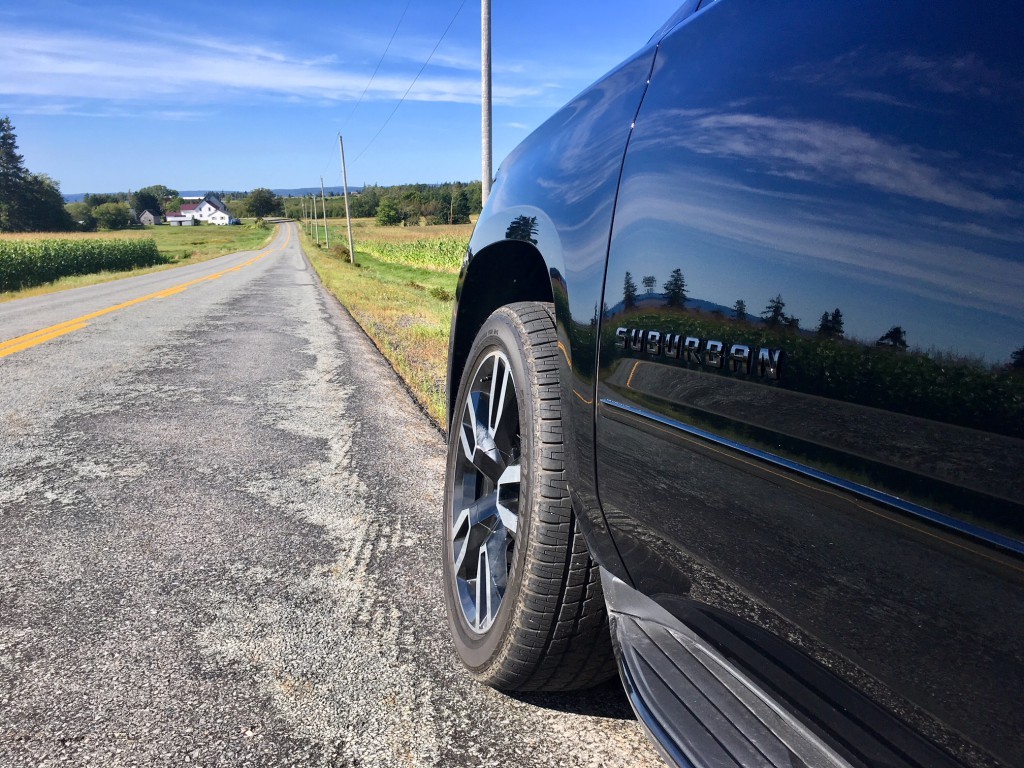 Back onto the road, on the highway specifically, the Suburban’s smooth ride is reassuring though its large mass is noticeable when attempting to keep it in its lane. Its span almost reached the entire width of a standard lane. But highway driving also gives the engine its chance to show off its party piece which is to appropriately, actively and inconspicuously go from running on eight cylinders to four. This is smart tech. Why do I need to be running on all cylinders when I don’t need to? The only indication that you’ve suddenly lost half your cylinders is if you look down onto the dash which displays an icon that now says V4 instead of V8.  I’ve experienced this technology in other vehicles from other manufacturers before and I don’t think anyone else’s tech is as refined and as unnoticeable as the tech in GM’s. 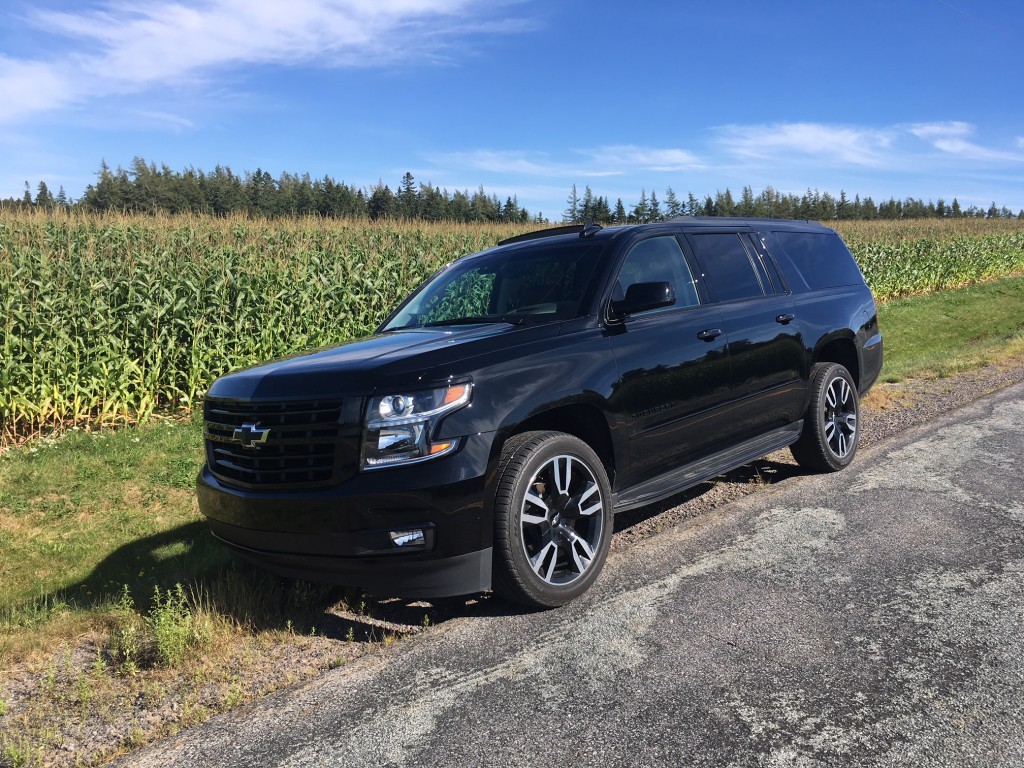 And it works too. The Suburban is rated at 15.3 L/100 kms city and 10.3 highway. In a week’s worth of real world mixed driving, I was able to return 12.7 L/ 100 kms. There are vehicles that are much smaller, much lighter, with smaller displacement engines that can get around the same mileage. When you consider the heft and size of the Suburban, it is truly an impressive feat. If you opt for a rear wheel drive model, you’ll get even better efficiency ratings along with better tow ratings; 8,300 pound towing capacity compared to the four-wheel drive version’s 8,000 pound capacity. But if you’re in Canada, trust me, get the four wheel drive version. 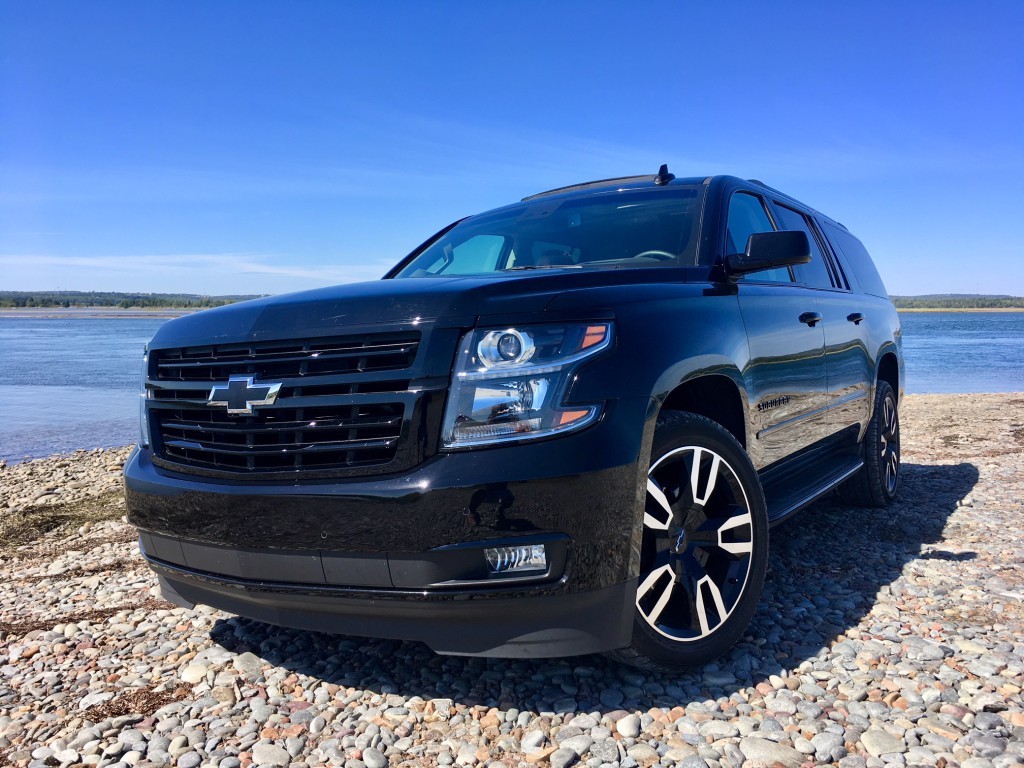 Or, alternatively, get the Tahoe version. The bigger and better 6.2 litre is available with the same awesome looking RST wheels, and it’s cheaper. One couldn’t exactly call it small either. But if hauling people and stuff is something you do more often than not, than the Suburban offers, truck-like capability with comfortable road manners, relatively good fuel consumption numbers and more.

And if you get it in black, people will either think your’e a cop or important enough to be driving a politician around. Nice.