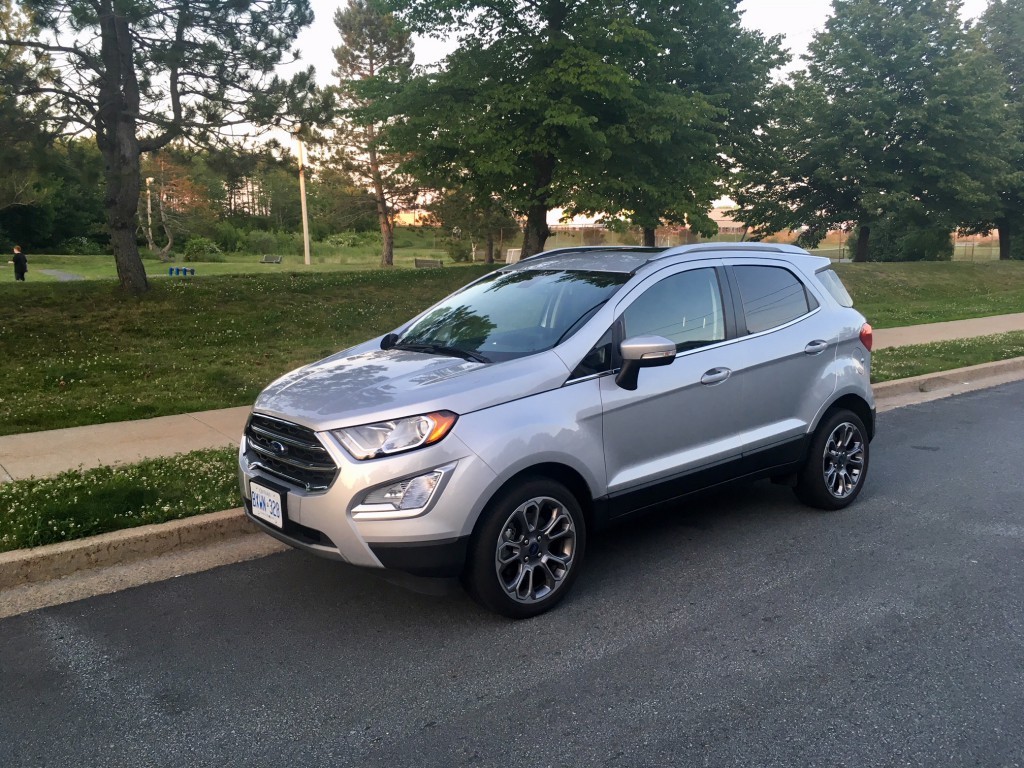 You may have recently heard that Ford is getting out of the sedan and hatchback business. That’s right, every car in their line up – save for the iconic Mustang – will be sent packing.

It’s an interesting strategy. On the one hand, the market is clearly shifting its preference towards SUVs and CUVs. It could be argued that Ford merely wants to get ahead of the pack and be labeled as a trend setter.

On the other hand, that leaves their line-up full of SUVs and CUVs only. There are still some people who prefer regular passenger cars as they tend to be less costly to buy and own, not tot mention they tend to have better handling and performance capabilities. If you’re a first time new car buyer, chances are your budget wouldn’t allow your first new vehicle to be an Explorer. Plus, the market often shifts every five to seven years with the price of gas largely playing a significant influence. Plus, it limits Ford’s ability to produce all-electric vehicles and hybrids.

Still, Ford claims to have an SUV or a crossover that covers for their dearly departed sedans and hatchbacks. This is where the EcoSport comes into play as the only conceivable vehicle to “replace” the Fiesta.

And before I give my take on the EcoSport’s worth, it should be noted that you’re already pronouncing its name wrong. Apparently EcoSport is pronounced as “echo sport”. Which is mind boggling for a number of reasons, not least of which is due to the fact that Ford spend so much time and money branding their turbocharged engines as ‘ecoboost’ vehicles (pronounced ‘eeko boost’) – to the point where the general public actually associates ecoboost with Ford – only to go and completely change the pronunciation of a word that already has its own pronunciation anyway. And then there’s the fact that Toyota’s lawyers must be salivating at the thought of possible copyright infringement: remember the Toyota Echo? Well, there was a sport version and guess what it was called. The Toyota Echo Sport. 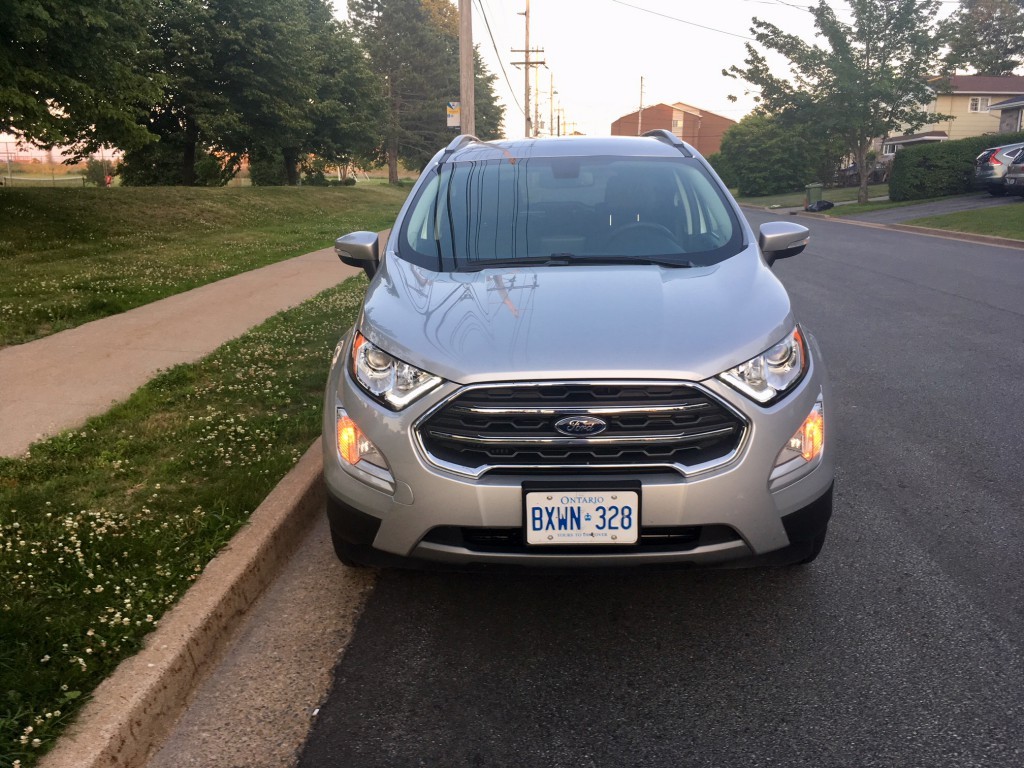 But I digress because we really must move on and talk about the exterior styling of the smallest SUV wearing a blue oval. It looks like Ford merely put the Escape into a compacter and voila. However the end result isn’t appealing to this author. It looks far too cutesy for my liking while also somehow looking awkward and stubby from certain angles.

Perhaps the most notable exterior feature is the tailgate which has the hinges fastened so that it swings open like a barn door. The good news is the hinges are fixed to the left side of the vehicle which means you can load and unload your stuff more easily when parked next to the curb. The bad news is it swings open quite wide so you need to be mindful to leave some room behind you when you park. A fun game is to ask unsuspecting friends and family to open the tailgate with no help or hints. They’ll likely struggle because the latch to the tailgate is actually integrated into the rear tail lights. Once you spot it, it seems obvious. It is moderately clever, though on the road it just looks like you’re driving around with a busted tail light. 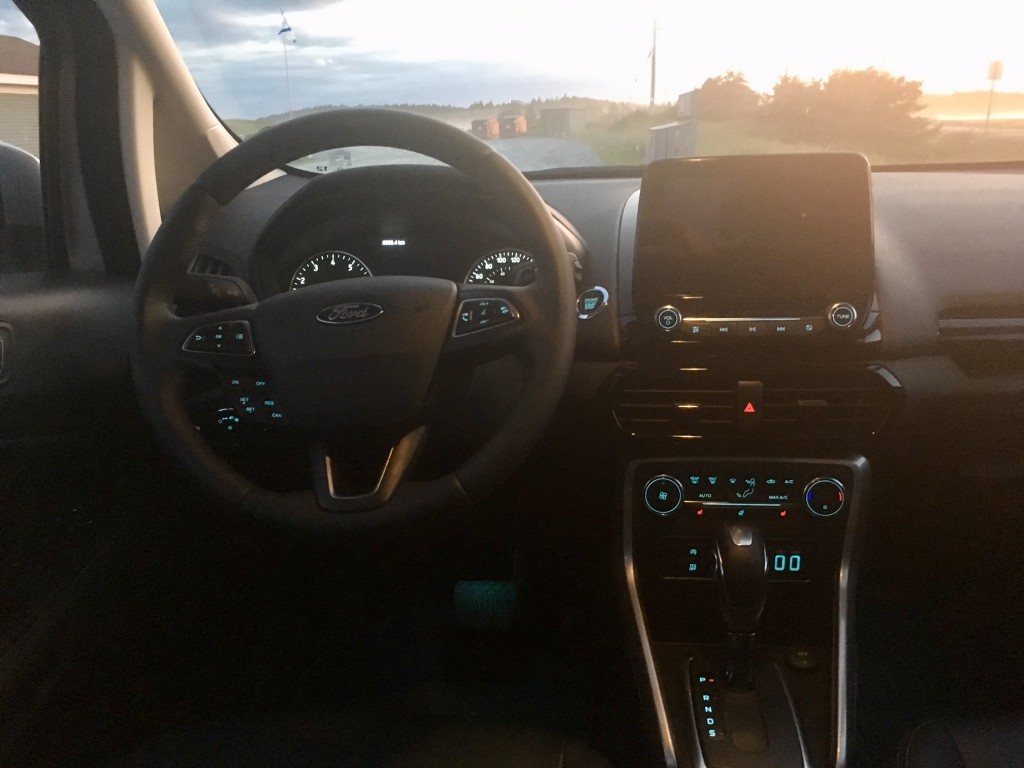 The Ecosport is a narrow vehicle and that becomes more obvious when you sit inside. The rear seats are tight for adults and likely only suitable for kids, though head room is not sparingly all around. Quality of materials are good and my tester came with Ford’s Sync3 infotainment system which has certainly improved in terms of functionality over the years. It is also Apple CarPlay and Android Auto compatible.

One advantage that the EcoSport has over the outgoing Fiesta is cargo room with nearly double capacity both with the rear seats up and down, which comes to 20.5 cubic feet and 50 cubic feet respectively. 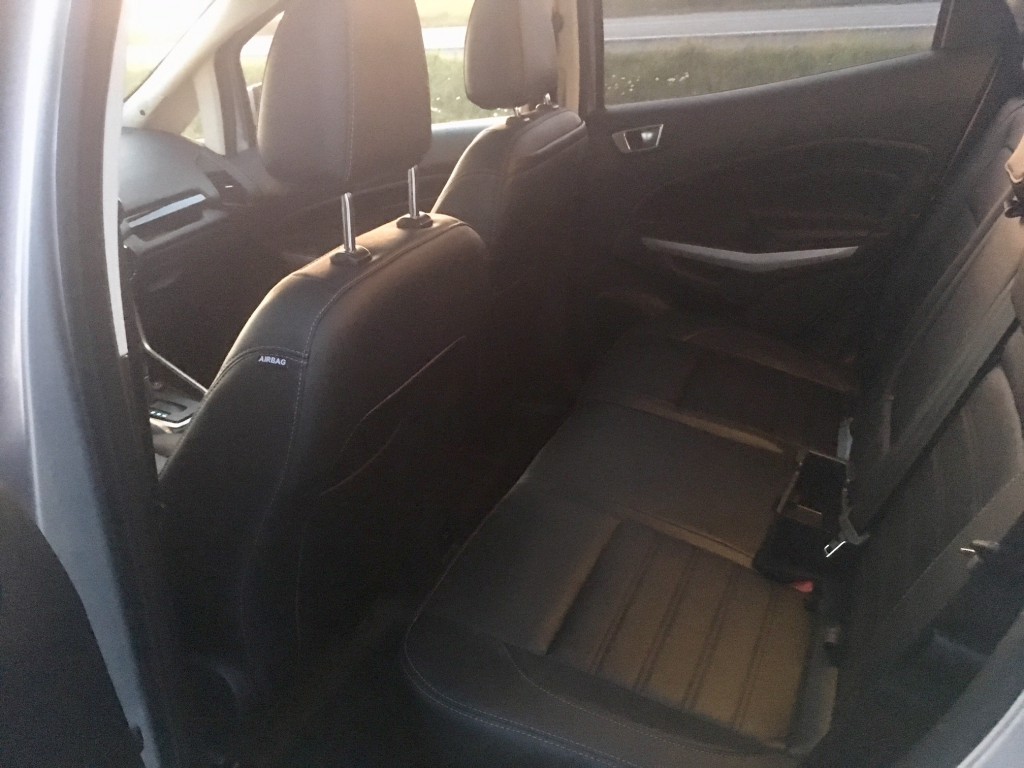 There are two engine options to choose from and which one you get depends on how many wheels are propelling the vehicle. If you opt for front-wheel drive, which my tester was equipped with, you’ll get a 1.0 litre, four cylinder engine that makes 123 horsepower and 125 pound foot torque mated to a six-speed automatic. The 2.0 litre requires that you select all-wheel drive and it bumps power to 166 horsepower and 149 pound foot torque mated to the same transmission. 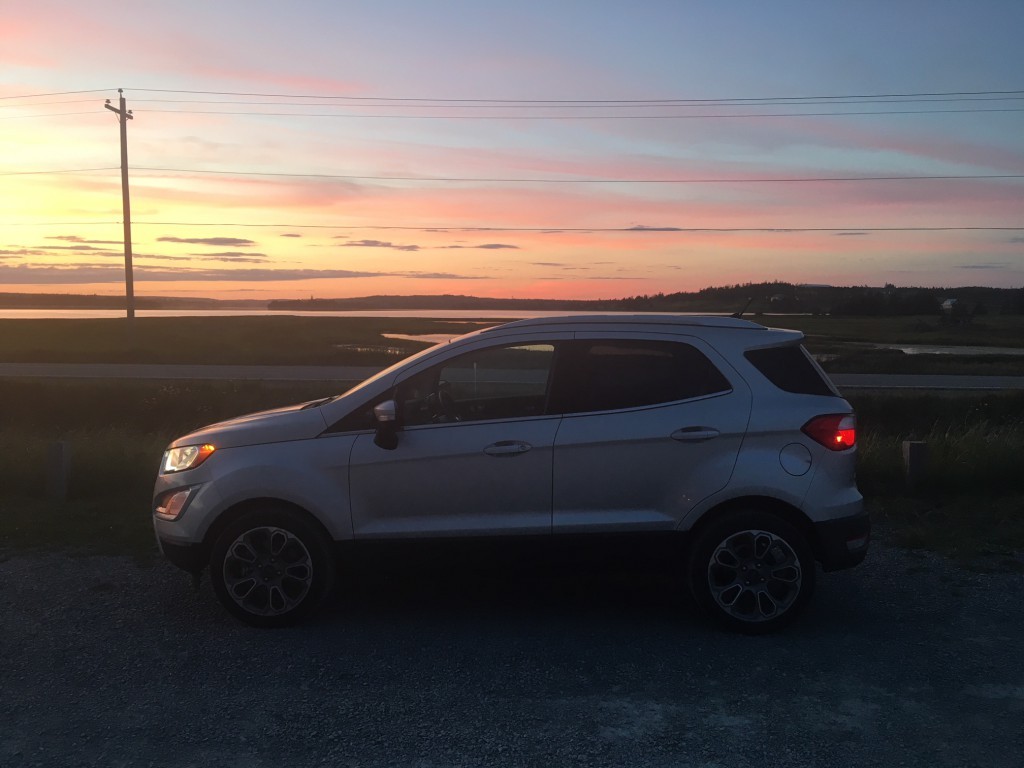 Power from the 1.0 litre is certainly adequate for most city driving situations, but on the highway the lack of oomph is more obvious making passing a bit of a chore rather than a breeze. And if you’re hoping to be the leader of the pack at the lights on a multiline road, you’ll more than likely have to settle for second or third as the EcoSport feels fairly slow. I’ve driven the Fiesta with the same 1.0 litre engine before, and I described it as “zippy and fun-to-drive”. I’m not sure the same can be said for the EcoSport what with its added weight and relative top-heaviness. It should be noted that the Fiesta I tested had a five-speed manual to help out, whereas the EcoSport gets only an automatic. 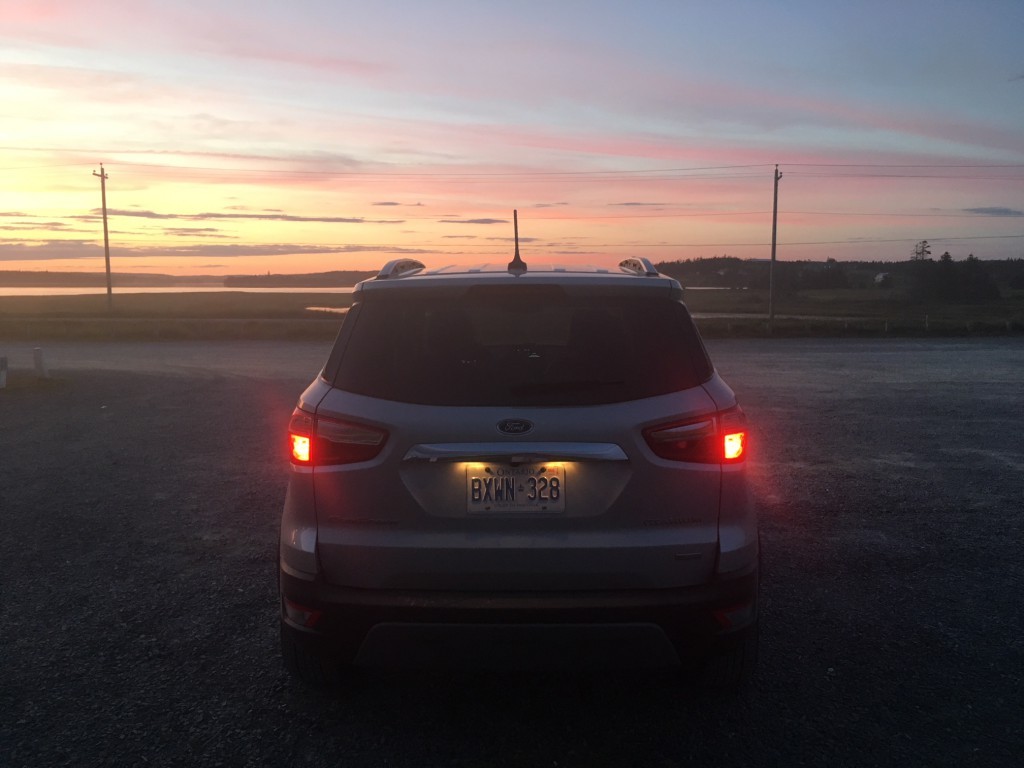 Still, the EcoSport can be tossed into a corner with relative ease and there is decent feedback from the steering wheel. The EcoSport’s track and wheelbase are on the smaller side which means confidence while cornering hard is gone quicker than most might be used to, but then again, I doubt any perspective EcoSport buyers are into flogging their vehicles in the bends.

The EcoSport doesn’t necessarily shine when it comes to comfort; you can certainly feel the bumps and imperfections in the road, but it isn’t irritatingly uncomfortable either, merely adequate. It’s something that perhaps most SUV owners are used to anyway. 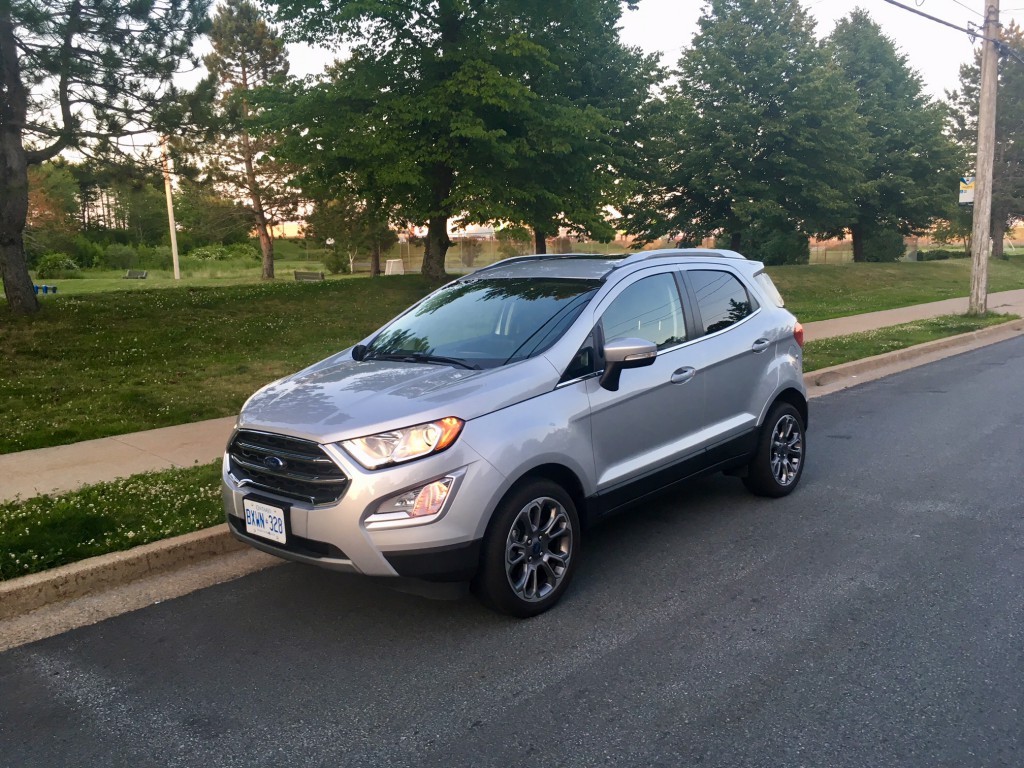 And that’s sort of the point, isn’t it? The EcoSport on paper, and on the road, is an okay offering. It gives those who want to pretend to have a rugged lifestyle the look of an SUV, while being city friendly to put around in. But the Fiesta is better on gas, more engaging to drive, is better looking (in my opinion), has multiple engine and transmission options to pick from and is cheaper to buy. The only advantage the EcoSport brings to the table is more cargo room and an all-wheel drive option.  I’m not sure that’s worth the extra dough. 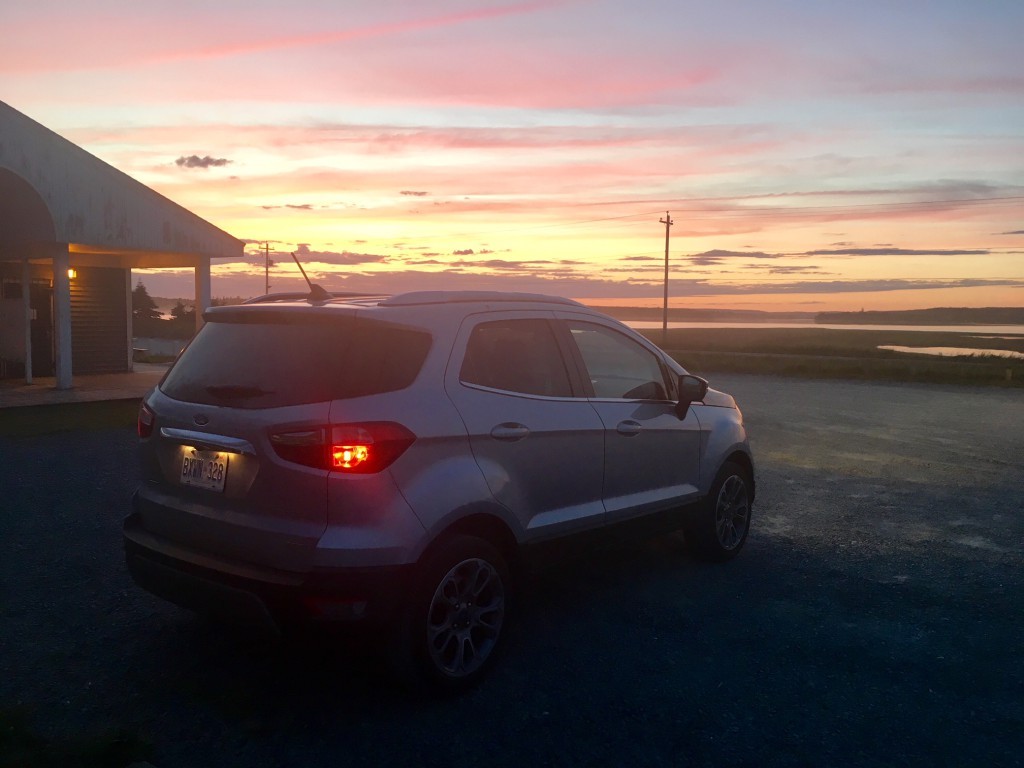 But for some, it likely is worth it. If you are one of those people who thinks having a higher seating position is an advantage and likes to pretend having an SUV somehow makes you appear outdoorsy and fun, then the EcoSport is certainly worth a spot on your test drive list.

For me, this whole compact SUV craze is just the latest reminder of how those who don’t care about cars or driving are the ones who dictate the market.

Personally, after having driven its replacement, I’m going to truly miss the Fiesta when it’s gone.