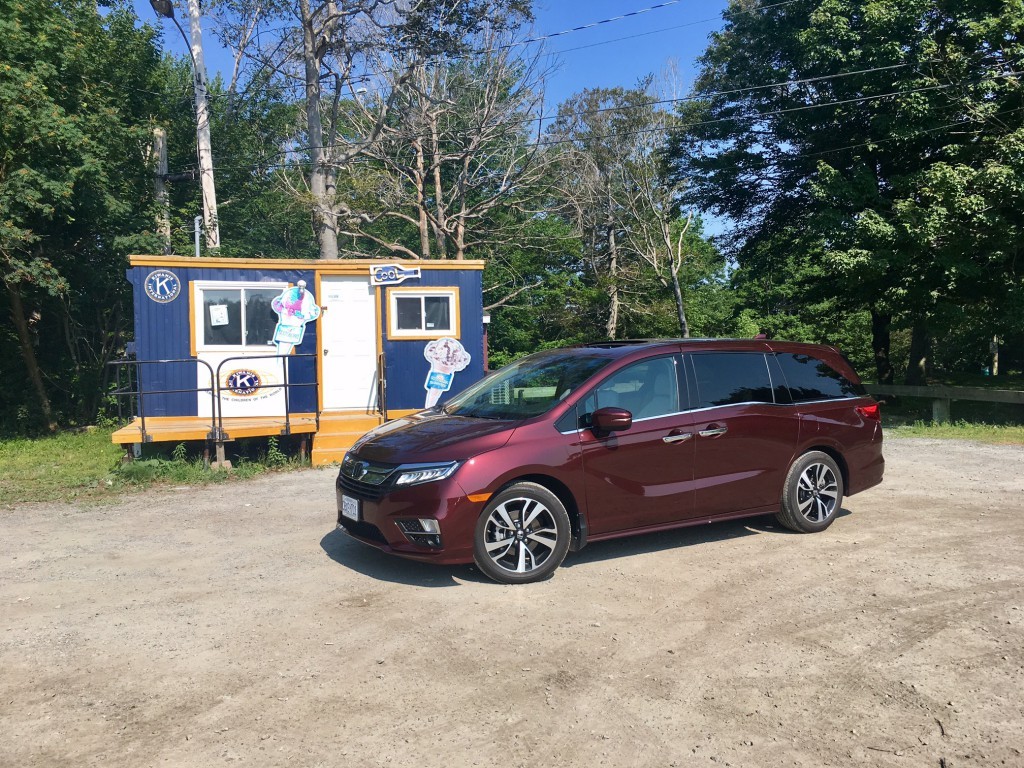 People who know I write about and review cars always want to know what I’m driving from week to week. If you’re interested in knowing too, I post my weekly press vehicle to my Instagram account.

I don’t often have much say in which vehicles I review or when I am scheduled to drive them. So when it turns out I have to give back a German hot rod convertible (review coming soon) and move into a minivan for the week, people seem to take pity on me.

Such was the case when everyone found out this week’s tester was the Honda Odyssey. There was a collective “oh you poor soul” reaction from mostly everyone I knew. By the way, no matter what I’m driving for the week, never feel bad for me. I do get to drive  a new car every week, after all.

But a good automotive writer should be able to move from a Porsche 911 into a Chevrolet Spark with an open mind. But that wasn’t the issue for me. I was actually excited to get into the Odyssey for a number of reasons. 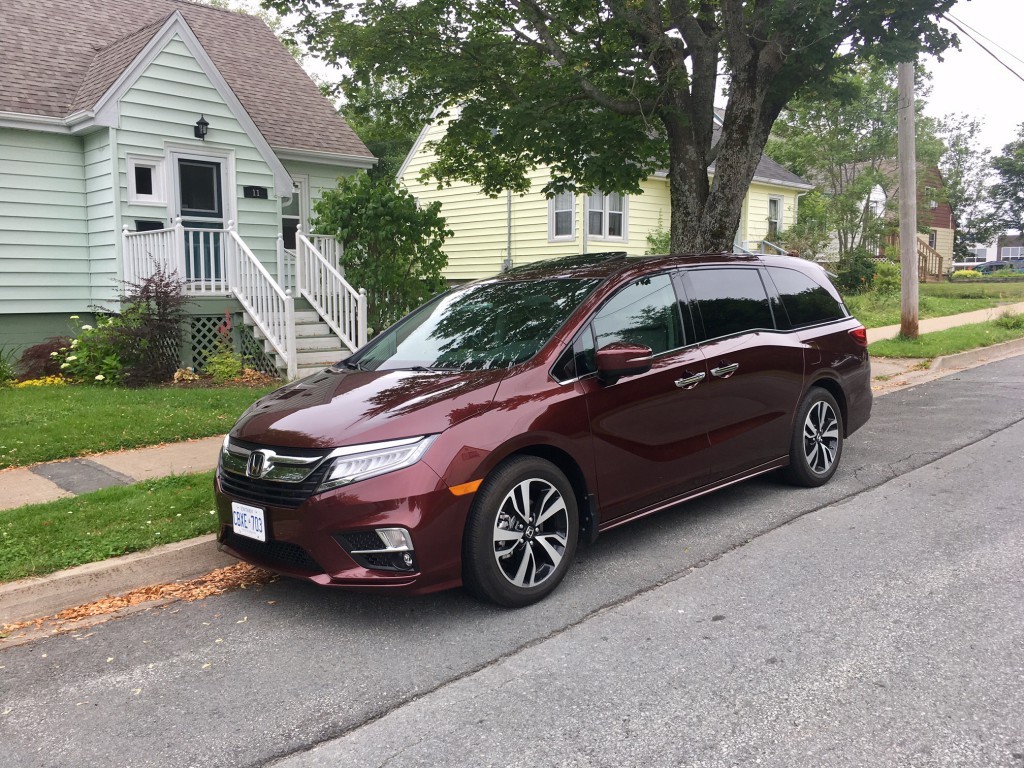 Firstly, the new Odyssey doesn’t look as nerdy or bloated as past versions. The new exterior blends Honda Corporate nicely with new headlights, grille, rear facia, wheels designs and more. One of my favourite cues is the seam which allows the rear doors to slide open now blends in perfectly with the belt line of the van, making it virtually invisible. While there’s currently only four minivans to choose from in the North American market, the Odyssey is among the best looking now. 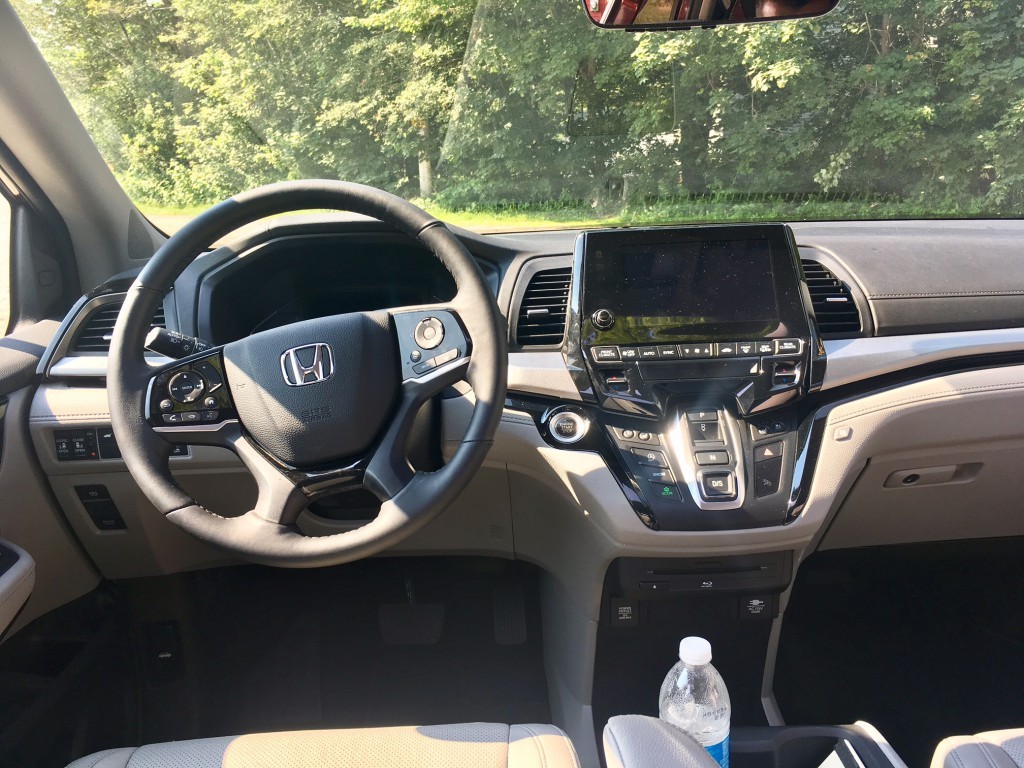 Inside you’ll find typical Honda styling as well. One notable difference is the gearshift which is now located on the dash and is push button style like on all Acuras and the Honda Pilot. Critics have panned the gear selector as being difficult to use, but I’ve never understood what was so trying about pushing a button. I got used to it fairly quickly. Now, it’s positioning on the dash makes it a bit of a reach, but it does allow for a lot more room for cupholders and cubbyholes – something every minivan worth its salt should allow real estate for. 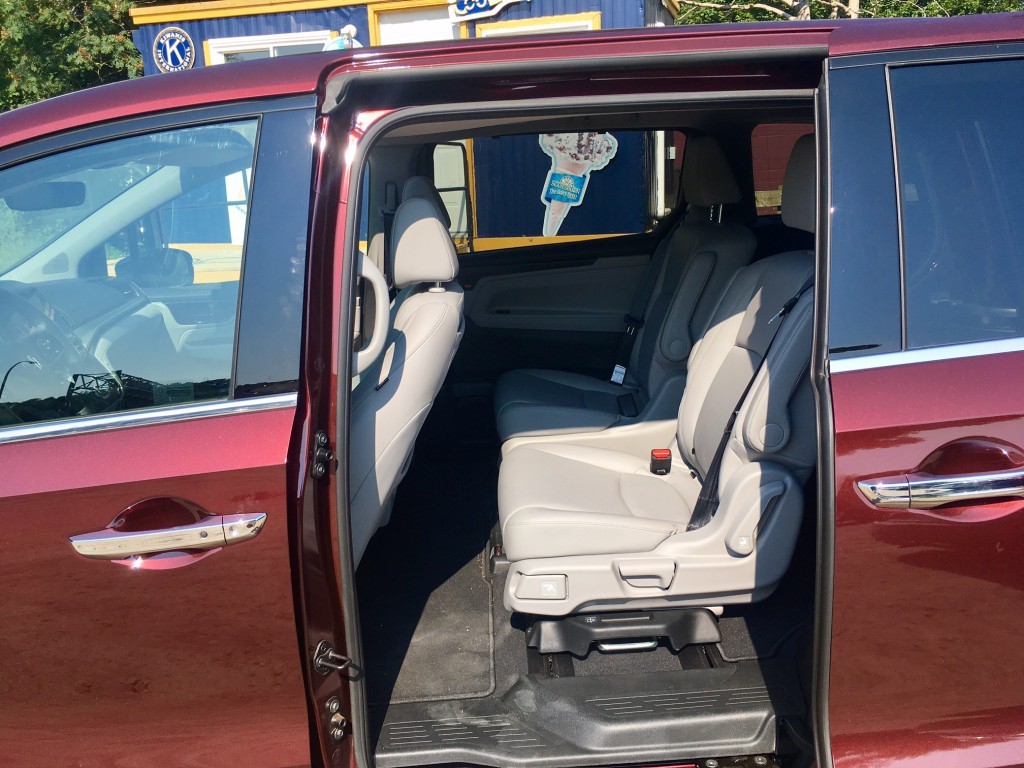 My loaded Touring model featured lots of extra goodies like LED headlights, leather seats, heated and cooled seats, power sliding doors and more. It also included rear entertainment meant to keep children occupied on long trips. There’s a screen which pops down from the ceiling which is better than nothing, but the screen can be a bit difficult to see from the third row. But you’ll be able to tell your kids in the third row to stop complaining about the screen without shouting because there is a microphone and speakers which allows you to use your indoor voice along with serenity now. 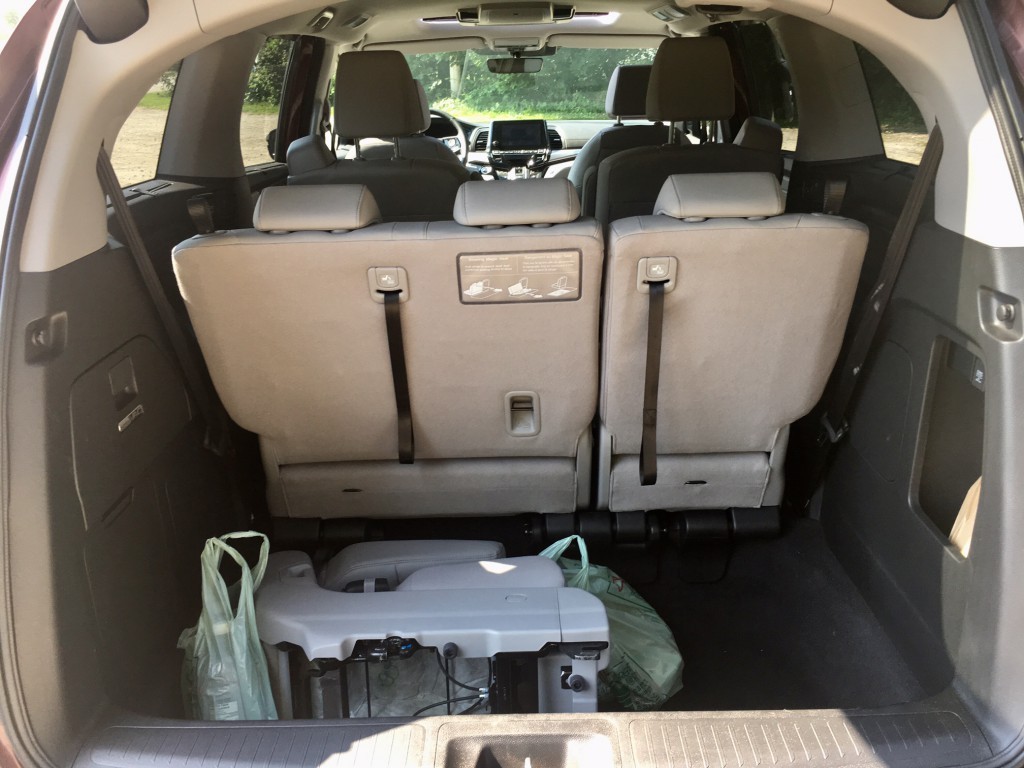 The infotainment screen is the best Honda currently offers, though that isn’t saying a whole lot. While it is a bit more intuitive and customizable in its layout, I still found it easy to hit a command you weren’t intending on hitting and there would still often by times when it wouldn’t respond on the first try. One odd thing that kept occurring was the radio stations. When I would turn the vehicle off and eventually turn it back on, it wouldn’t default to the radio station I had left it on. It would just a random station on satellite radio. I would then have to take the time to go back and find the the station I had originally left it on.

Likewise, when I would park the van and push the button for the ignition to turn it off, it sometimes would require me to push it once or twice more in order for it to actually turn off. 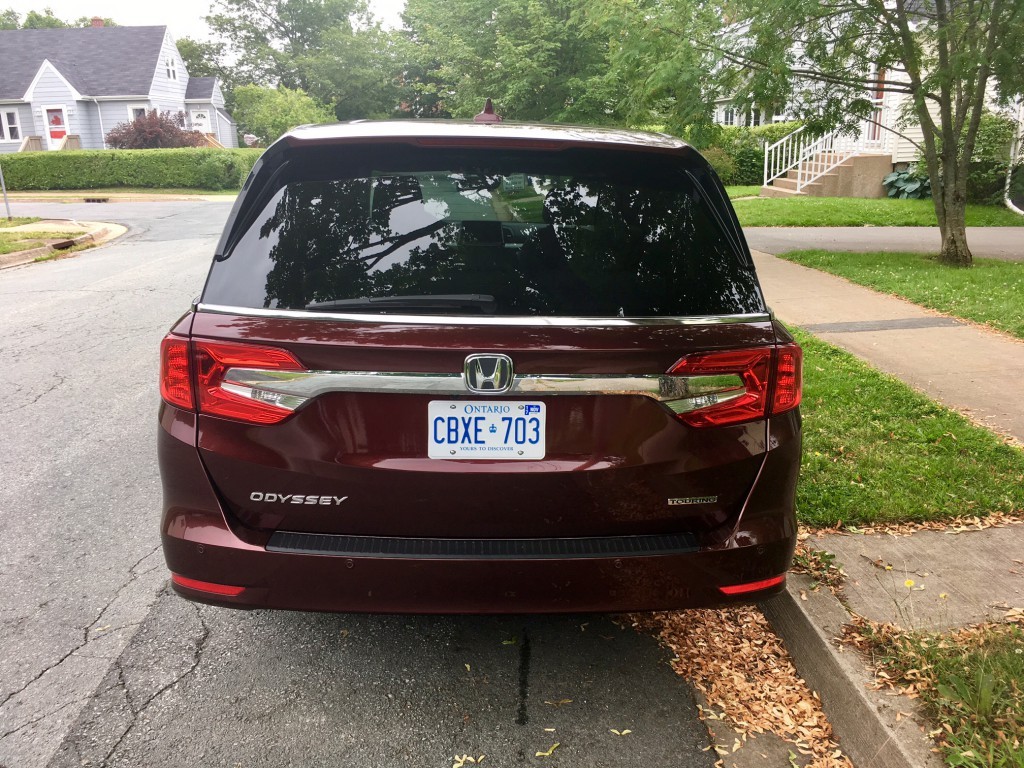 But it’s not all bad. Joy of joys, Honda has given the Odyssey a volume knob, bucking the trend of the Civic, HRV and Accord. Thanks, for giving us back something you shouldn’t have taken away in the first place, Honda. Also, CabinWatch allows you to project video onto the screen so you can catch your second and third row passengers being bad, which is of course easier than giving yourself whiplash when you suspect your children are fighting.

The thing is, if you want any of the goodies mentioned above, you’ll have to step up to the most expensive trim; the Touring model. 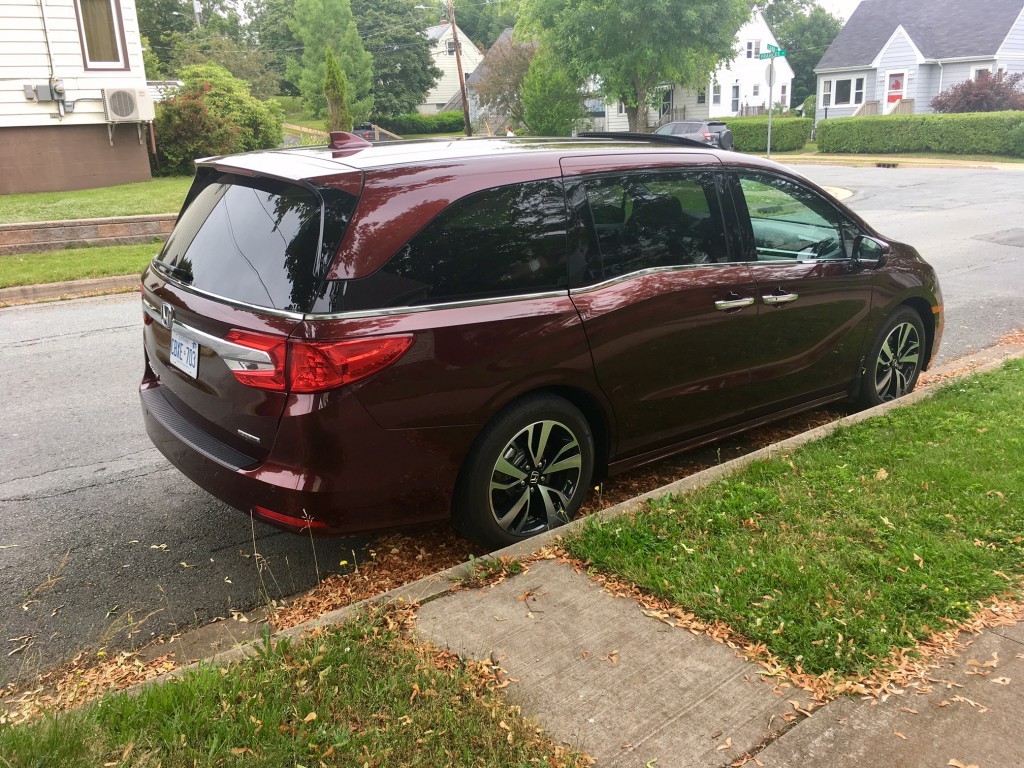 But perhaps one of the best features of them all is the simplest. There’s a vacuum inputed into the back. This makes cleaning up messes and crumbs an easy task. 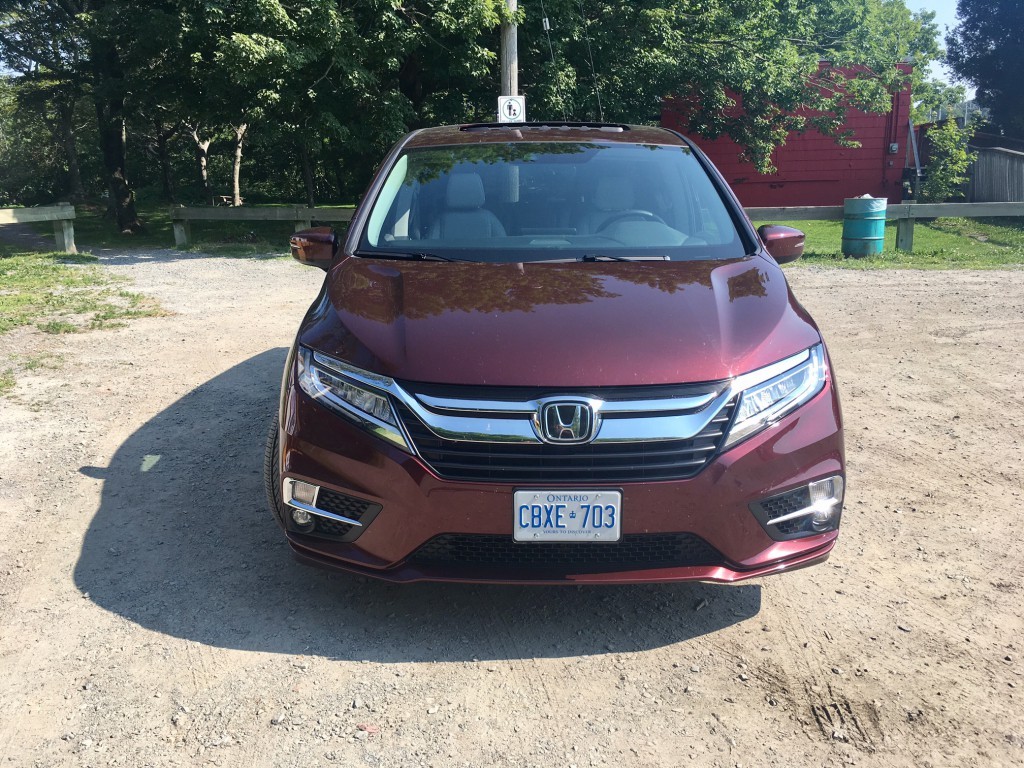 Under the hood you’ll find a 3.5 litre V6 which produces 280 horsepower and 262 pound feet of torque mated to a 10-speed automatic. That’s right, a 10-speed. It’s the first 10-speed I’ve experienced and all I can say is, the other manufacturers currently developing 10-speed transmissions have a high bar to live up to. This transmission is smooth and refined. And perhaps more importantly, it knows which gear it needs to be in most of the time. It doesn’t go searching and hesitating like a lot of 9-speed transmissions I’ve tried in the past.

The end result of a powerful engine and good transmission is a rather pleasurable driving experience. The Odyssey is quite comfortable, bordering on a premium feeling ride. This makes road trips less of a chore and more of a pampered experience. Being a minivan, handling isn’t its forte but that’s probably a good thing since you wouldn’t want to clean up all the vomit from your young passengers because you took a corner without braking just because you could. Rather the Odyssey remains composed and rather surefooted. 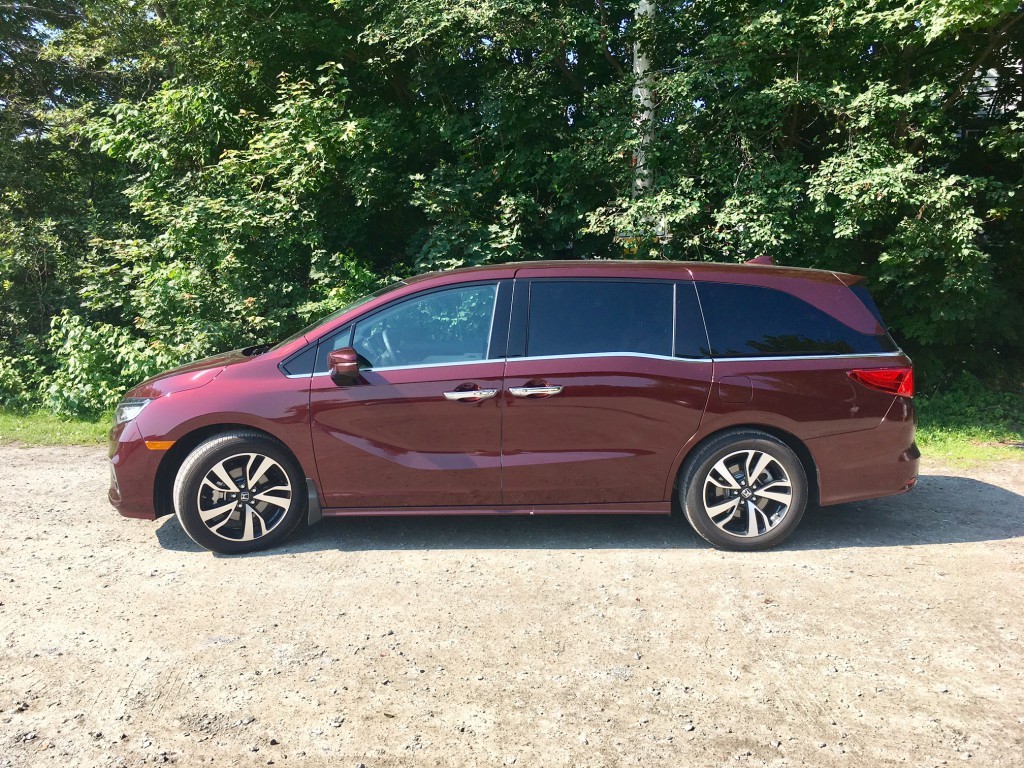 Official fuel consumption ratings land at 12.2 L/100 kms city and 9.0 highway. In mixed driving I was able to average a rather decent 10.6 L/100 kms. If you’re looking for a minivan that’s also good on gas, however, the Chrysler Pacifica can now be had as a plug-in hybrid.

And if you’re looking for a minivan with all-wheel drive then Toyota’s Sienna can be equipped in such a way. And this is the thing. Every minivan offered has different and unique things that make them seem compelling. The Odyssey’s main draw is now, in my opinion, its 10-speed automatic, premium ride and of course the onboard vacuum. But the stow and go seating along with the plug-in hybrid option of the Pacifica is certainly compelling. The all-wheel drive of the Sienna gives peace of mind in the winter and the relatively low price of the Kia Sedona makes it attractive for those on a budget. Each minivan offers something completely different. What they all consistently do better than SUV’s is haul people and their stuff. They always have an they always will. So if you wanna be cool, get a Pilot. If you wanna be smart, get the Odyssey. 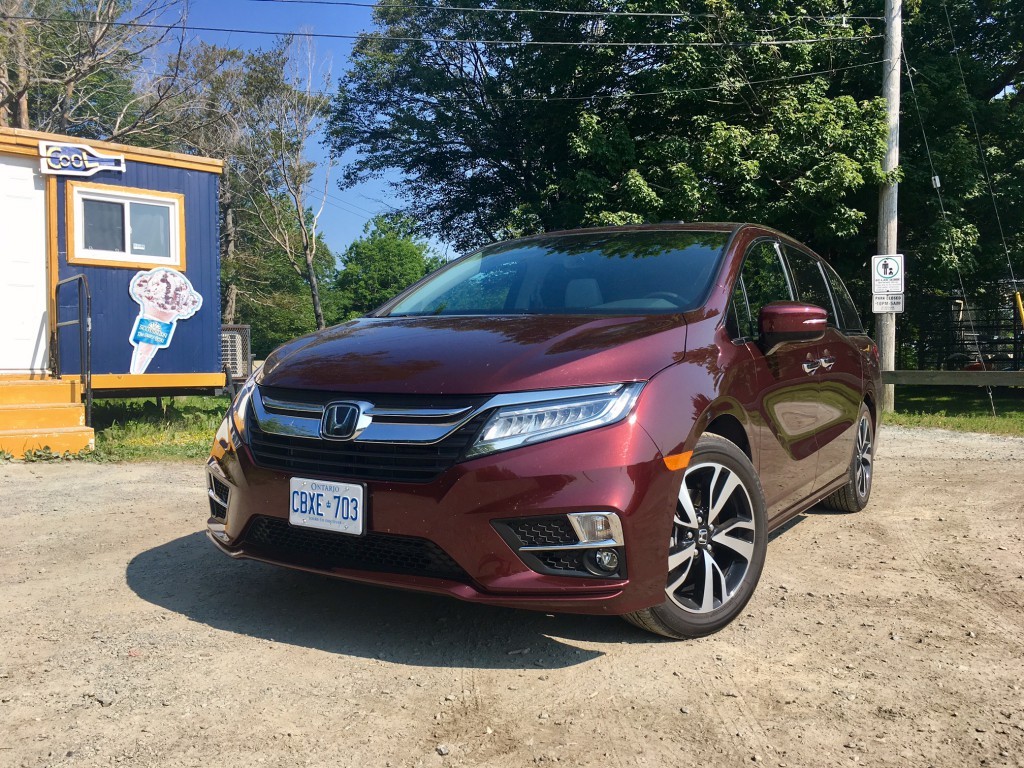