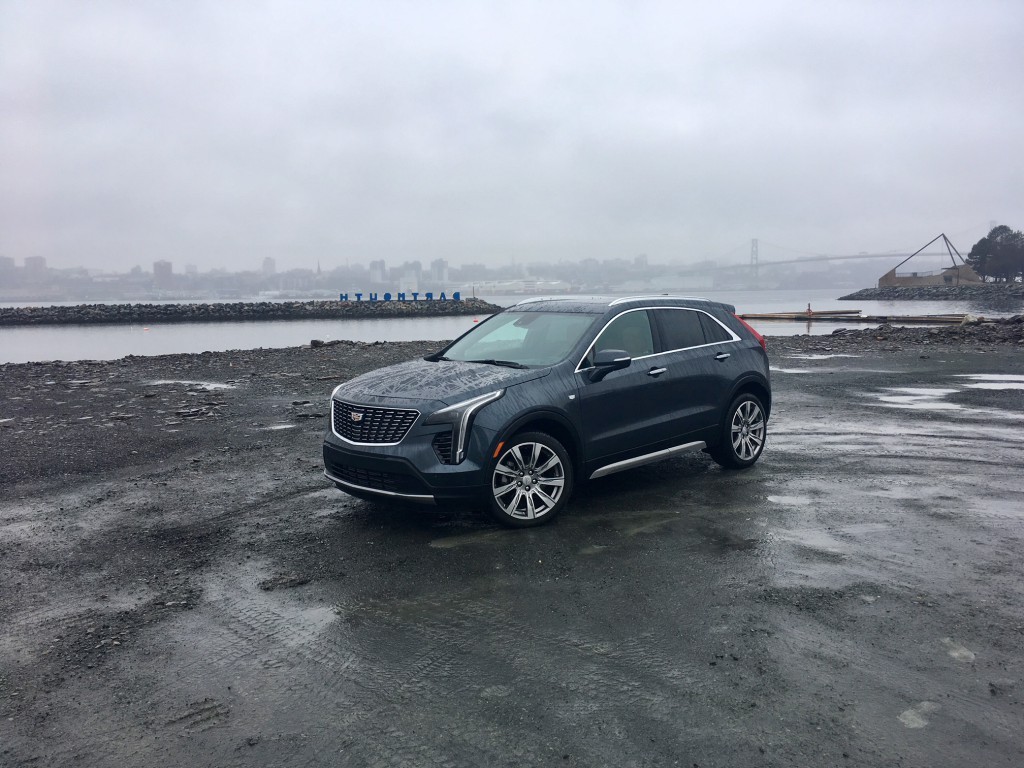 Last year I took the Cadillac CTS out for a week  to see how the aging sedan was getting on while a slew of new and updated competitors hit the market. Overall, I still enjoyed the CTS and find it to be an overall capable performer, however there was one issue that I noted and it isn’t even necessarily an issue with the CTS itself. I said:

Now the real money is within SUVs and crossovers. Cars are about as desirable as Lupus, let alone large performance sedans like the CTS. And of Cadillac’s current six vehicle lineup, four are cars. That’s a problem.

I’d like to think that folks at GM read my article, delivered it personally to the desk of CEO of General Motors Mary Barra, she read it and had a lightbulb moment saying, “My word! That young, talented Maritime writer is right! We do need more SUVs!”

Of course, I would bet a lot of money that the CEO doesn’t read any of reviews. On top of that, I’d bet even more money that GM had been well aware of this issue within its product lineup for some time, and thus already had some SUVs/CUVs in development well before I even wrote my CTS review. But my version of events is much more fun to think about.

As a bit of an interesting sidebar, the former President of General Motors Canada, Steve Carlisle, was put in charge of global Cadillac operations, so the XT4′s very existence is thanks to a Canadian. Nice! 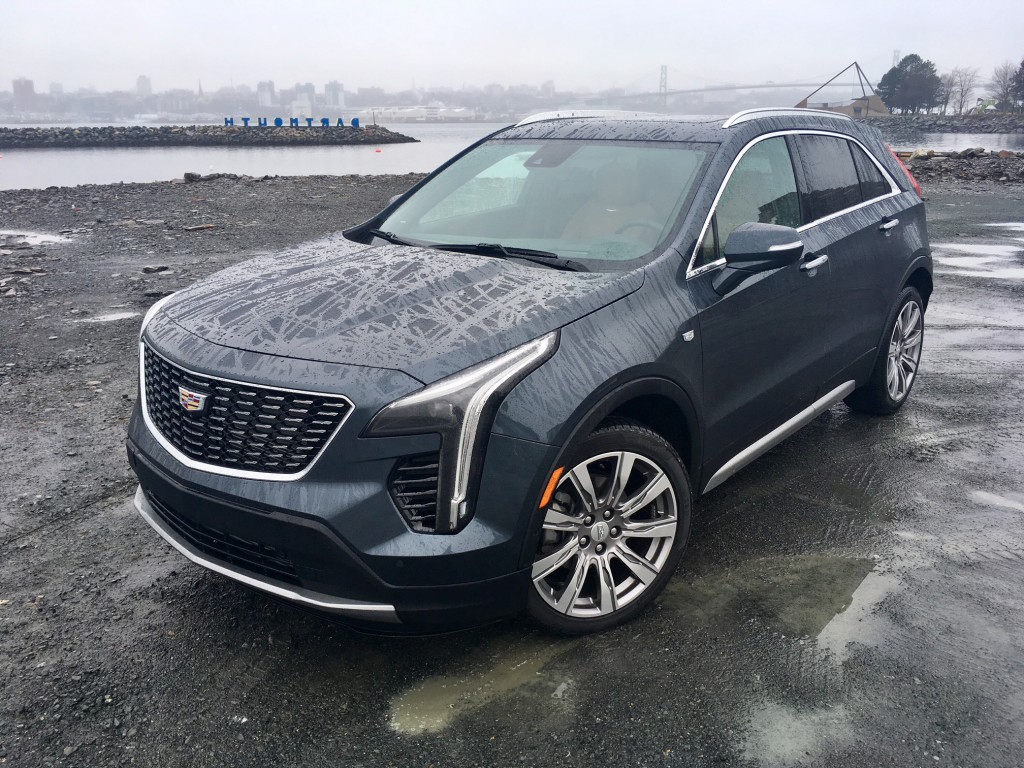 In terms of styling, the folks at Cadillac should be given a gold star. It looks decidedly Cadillac yet completely unique at the same time – a feat most of the big German manufactures can’t seem to pull off anymore. Further, the XT4′s exterior looks can be differentiated by trim level. The Sport trim gets an all black mesh grille with gloss black surround, sportier looking alloy wheels, and Altezza style tail lights. My tester was the second most expensive trim available, the Premium Luxury trim, and it gets regular tail lights (though they are still LED) and more aluminum trim pieces and 20-inch alloy wheels. Overall, I think most would agree that the XT4 looks the premium part and is quite appealing as such. It doesn’t simply look like a raised hatchback. 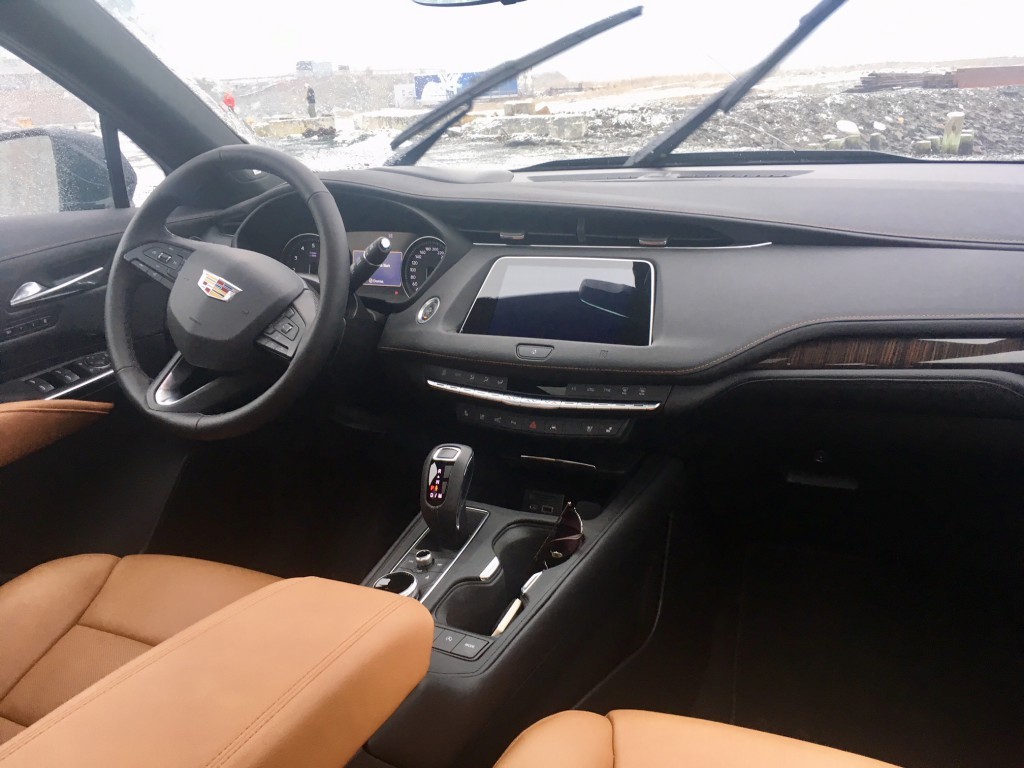 Interestingly, according to GM, the XT4 is meant to resemble the spawn of the much larger Escalade, specifically, it’s supposed to look like its puppy. Yes, its puppy. Who knew the Escalade was a canine? I don’t think it looks like a mini Escalade, but you be the judge. The XT4 gets its own unique interior as well, which features all the niceties you’d expect including Apple CarPlay and Android Auto. It also gets an eight-inch infotainment screen featuring an updated – and much better – version of Cadillac’s user experience system. It is much more logically laid out, has a cleaner and sharper look and is, crucially, much more responsive to commands. 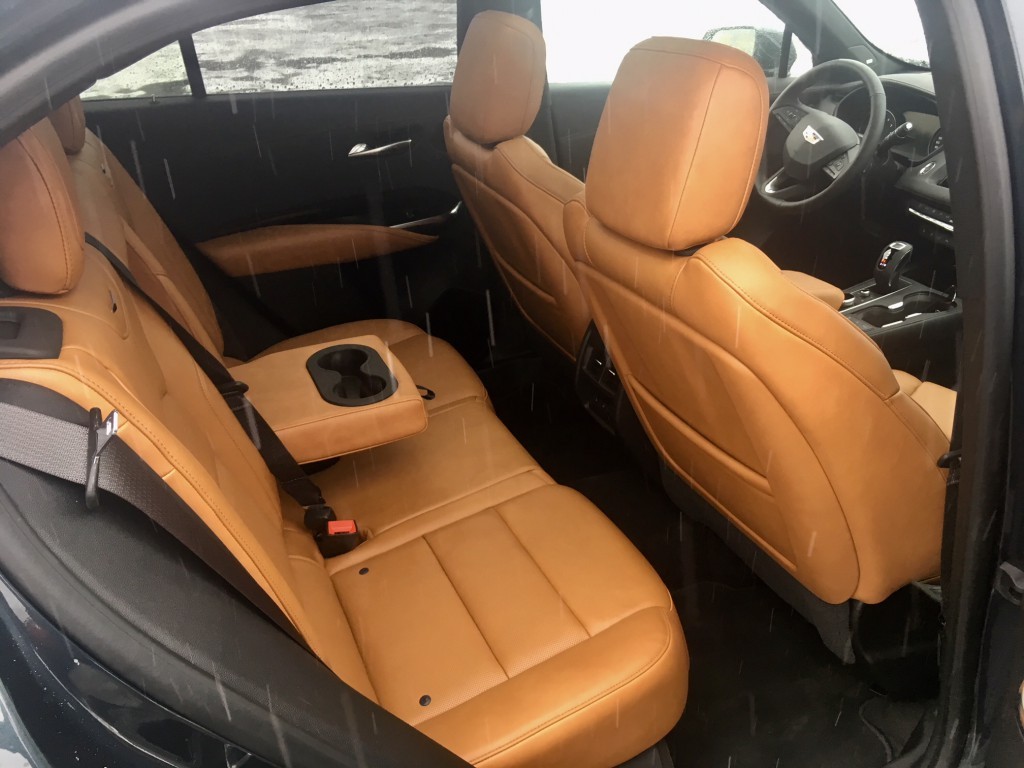 The design itself is quite nice with lots of rich feeling and looking leather throughout. At last, there are physical buttons again. Cadillac had gone through a phase where touch capacitive buttons were everywhere. They didn’t work when Ford used them and they certainly didn’t work when GM picked up the fad, but happily none of that matters much anymore. 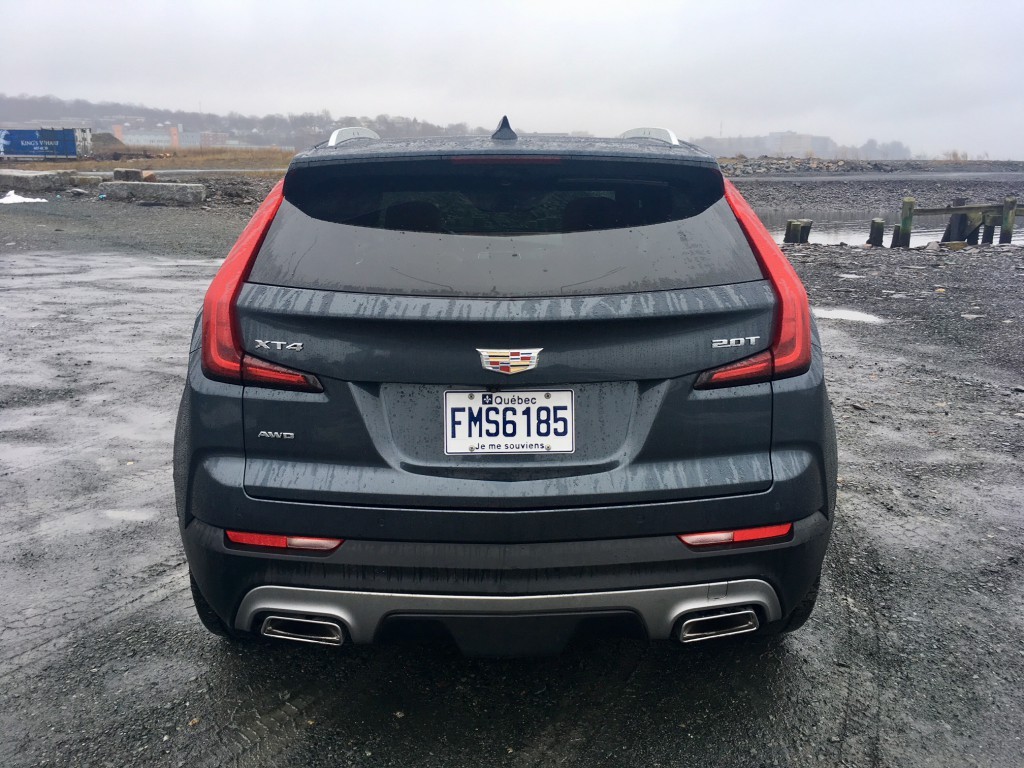 This is a compact SUV so don’t expect vast amounts of people or cargo room. Head room is fine throughout, rear legroom is adequate. It would be a bit of a challenge to fit three adult sized humans in the rear seats – best to leave the centre seat for your beverages as a set of cup holders can be lowered in place. Rear seat passengers also get treated to heated seats – something that should really be standard on premium nameplates these days, especially since you can get them in a Kia Forte now. Cargo room is tight, there’s no other way of putting it. I used the XT4 to pick my aunt up from the airport and she had one large suitcase and one small carry on. Both could not fit in the cargo bay. In fact, the one large suitcase itself  barely seemed to fit – or at least, the rear hatch wouldn’t allow it to. We had to put it in the rear seat. I understand that compact vehicles aren’t going to be minivans, but I would expect much more versatility and cargo room at this price point, especially since  many of the XT4′s main competitors offer up much more room for cargo. 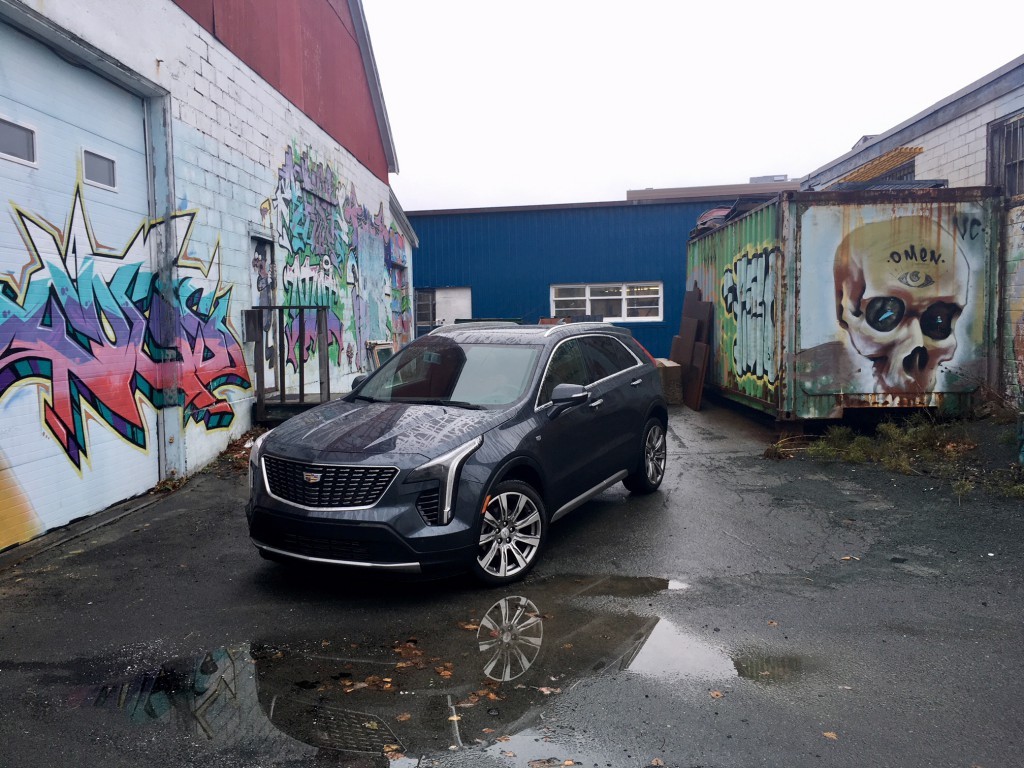 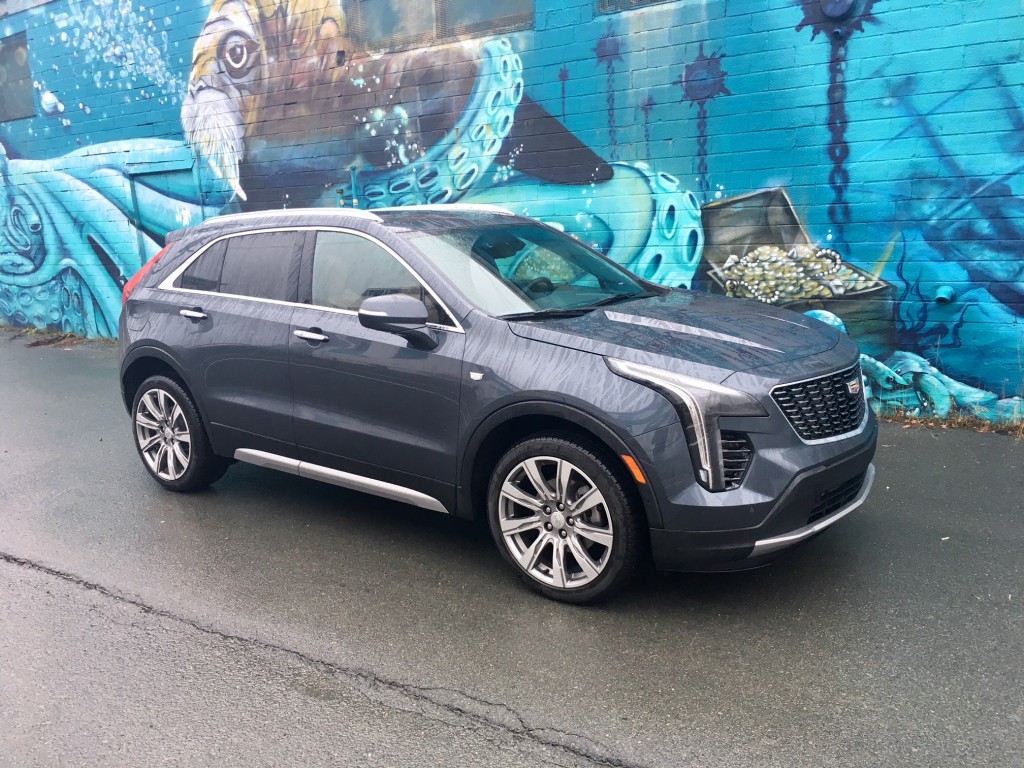 Of note is the gear lever, which takes a bit of getting used to. It’s award in its operation and I found myself double-checking to make sure it was indeed in the gear I originally intended. 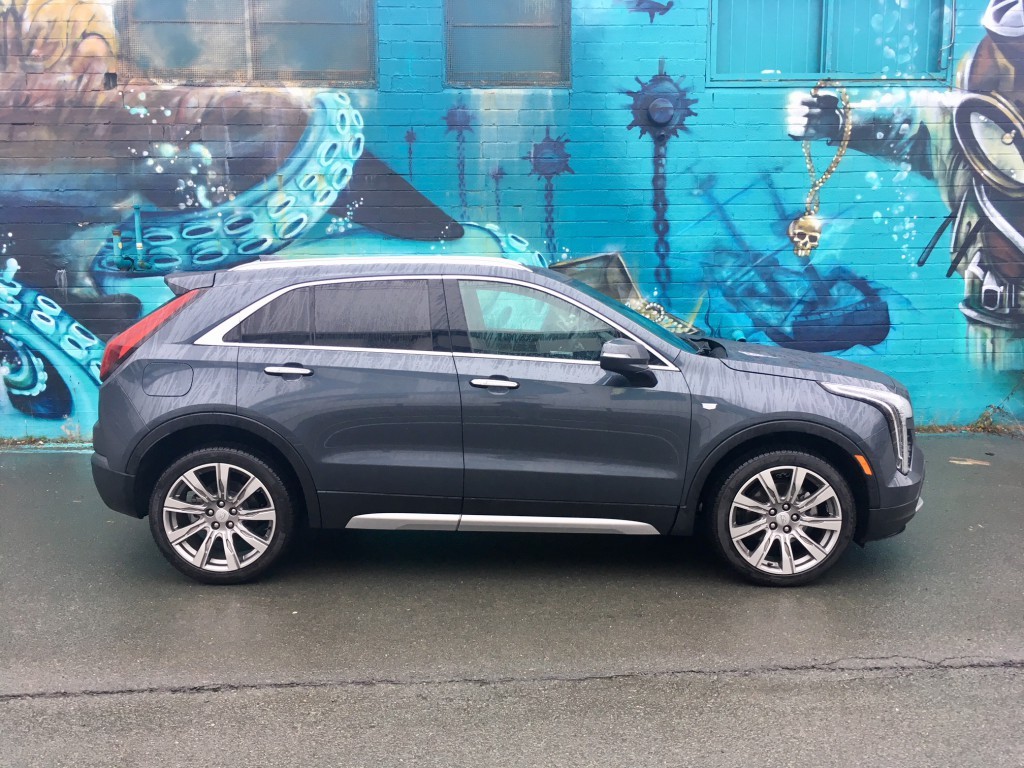 Power comes from a 2.0 litre turbocharged four-cylinder which produces 238 horsepower and 258 pound foot torque mated to an all-new nine-speed automatic. It should be noted that all-wheel drive isn’t necessarily standard, in which case, front-wheel drive is the name of the game. I suspect most Canadians will opt for all-wheel drive. Regardless, the end result is a little SUV that can scoot from zero to one hundred in the seven and a half second range. That’s not blistering, but certainly not slow either. And it doesn’t feel slow when you put your right foot down, especially in sport mode. 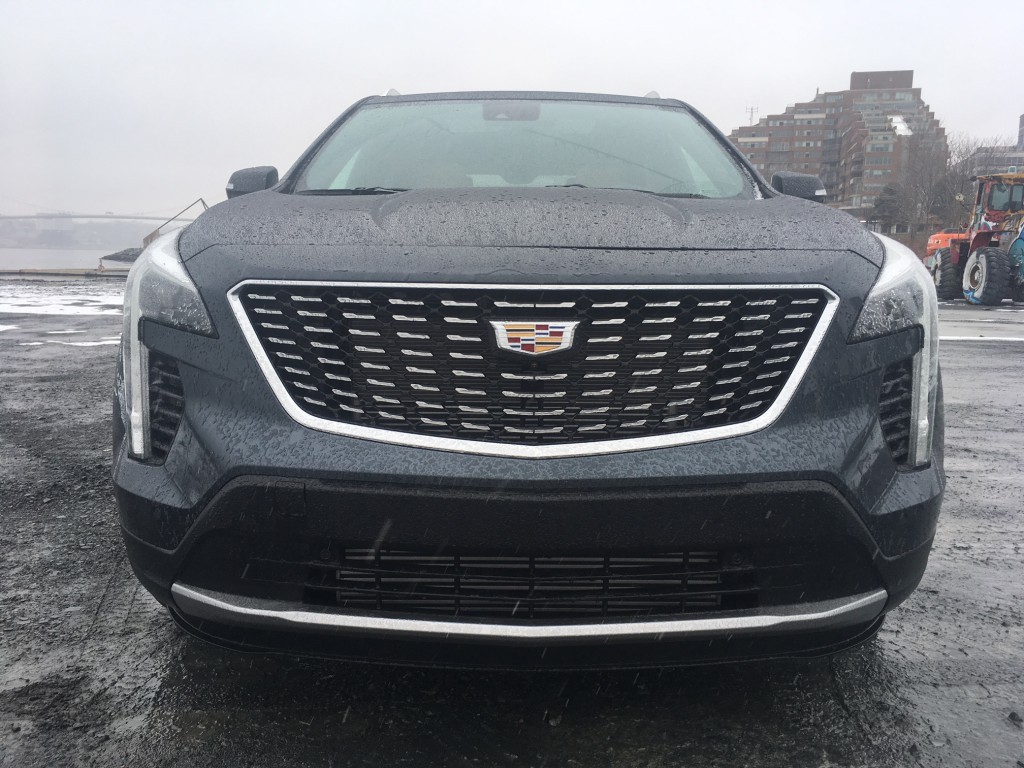 In the bends, the XT4 comes off as confident and sure-footed. The automatic cycles through gear shifts appropriately and smoothly to boot. It’s only the steering feel that lets you down a tad, it’s on the lighter side – even in sport mode – but you eventually get used to it and are able to compensate quite easily. And speaking of the steering, the turn radius is embarrassingly bad. What should be a simple maneuver, into a parking space in a grocery store parking lots for instance, often needs at least one correction. But body roll is minimal and it gets standard magnetic dampers, which means despite how aggressively you intend on driving, your comfort will rarely take a hit – coddling is the name of the game here. 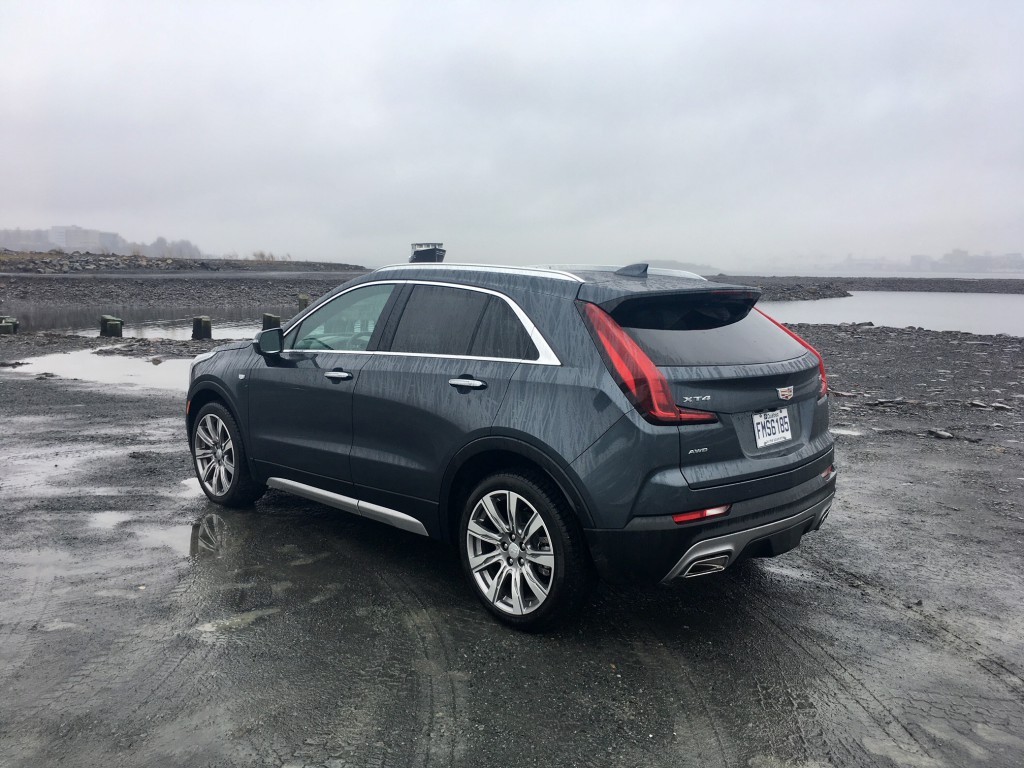 If you follow me on instagram (if you don’t, please do! Follow me @car_driven) I made a post on the XT4 predicting that it will be a sales winner. After having driven it, I still stand by that claim. The XT4 does much of what makes premium crossovers popular. It’s a good size, good driving dynamics, nice interior and, of course, is full of goodies. It doesn’t feel big and cumbersome like a lot of SUVs. It is sure to give the competition a run for its money. But speaking of money, I hope you have a lot of it because the way my XT4 came equipped, it puts it in XT5 category. Still, when staked up against its rivals, the XT4 delivers a credible product – one that is finally needed to keep up with the current automotive market trends. 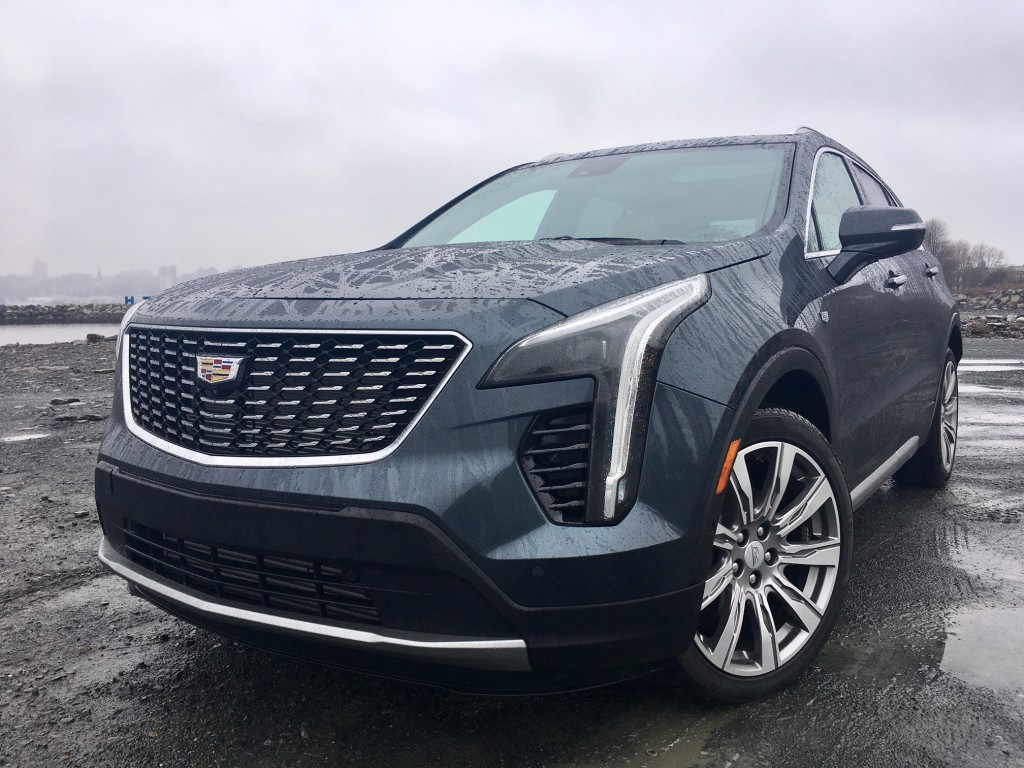