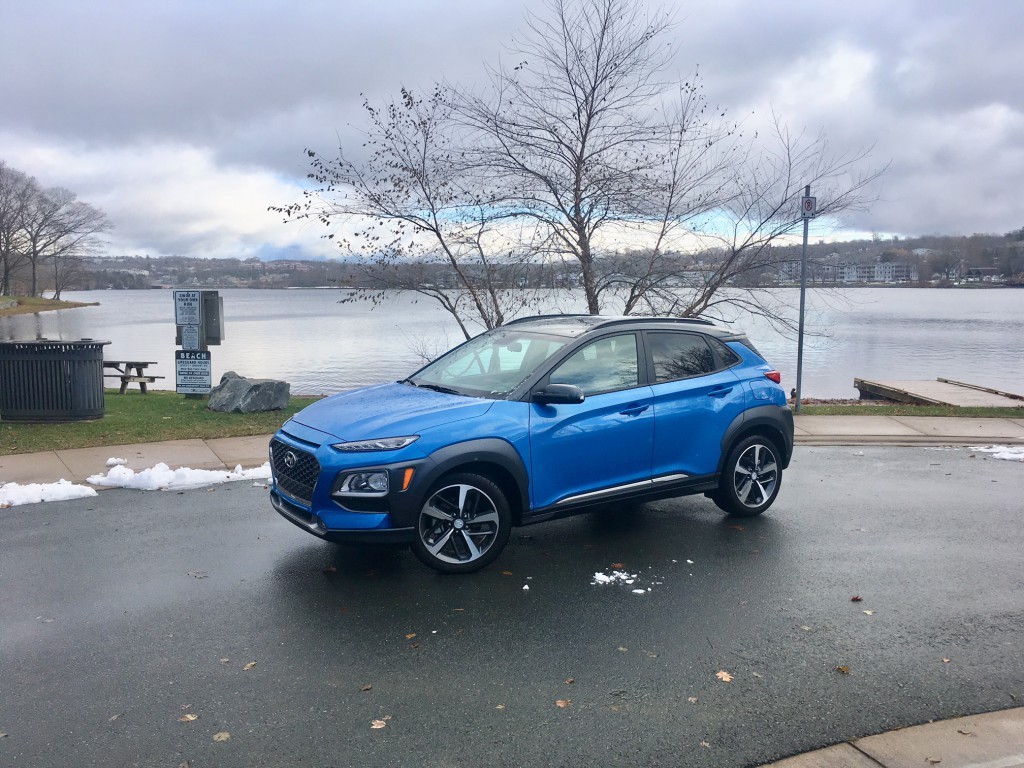 When I reviewed the all-new Nissan Kicks, I made a bold claim:

Since it’s been years since I reviewed the aging Kia Soul and having never driven the Kona previously, this was perhaps an easy claim to make. Now that I have finally gotten some seat time in the all-new Kona, I can make a more informed decision on that comment.

But before I do, let’s take a look at the thing about the Kona that might drive consumers to their local Hyundai dealerships: style. 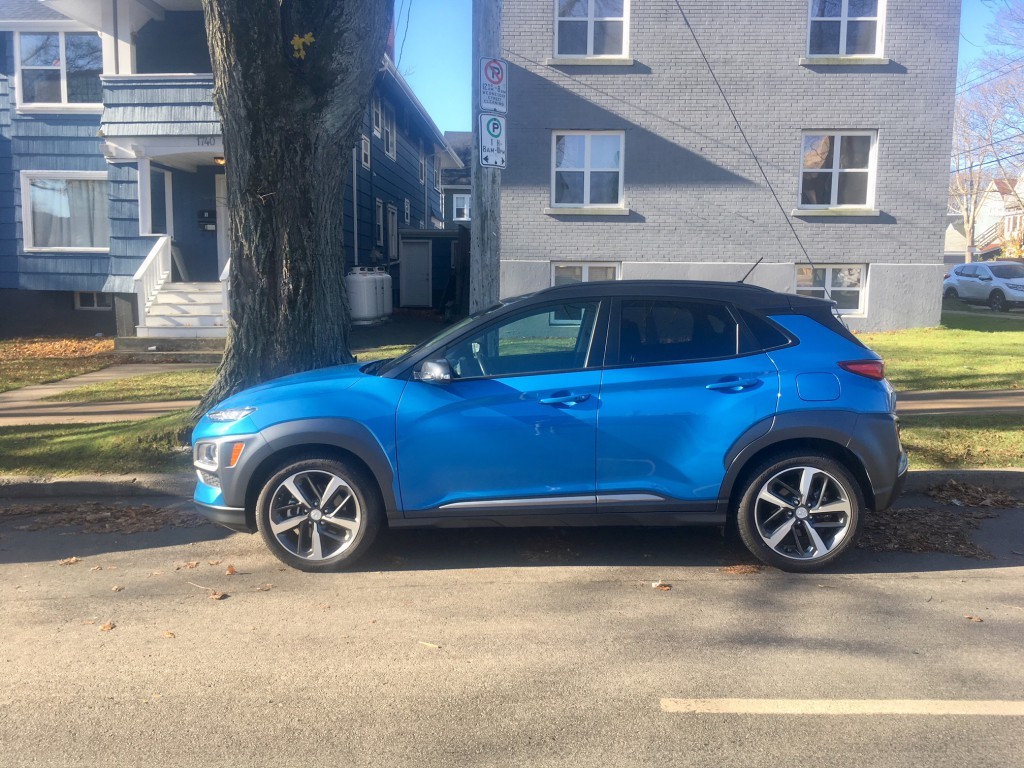 Hyundai is the latest brand to mess about with our traditional sense of what a front end of a vehicle should look like. With lights all over the spectrum of different shapes and sizes, along with a pronounced grille and indentations here and creases there, it’s obvious Hyundai wanted the Kona to be a stand out in what is quickly becoming the most popular segment in Canada. If you were hoping for LED headlights, you’ll only get them on the top trim, but regardless, at night, with all the lights on, the Kona certainly keeps attention as well. A low roofline, 18-inch wheels, stretched tail lights in the back with turn signals divorced from them, complete the look. While technically labeled as an SUV, the Kona looks more like a raised hatchback a la Subaru Crosstrek. 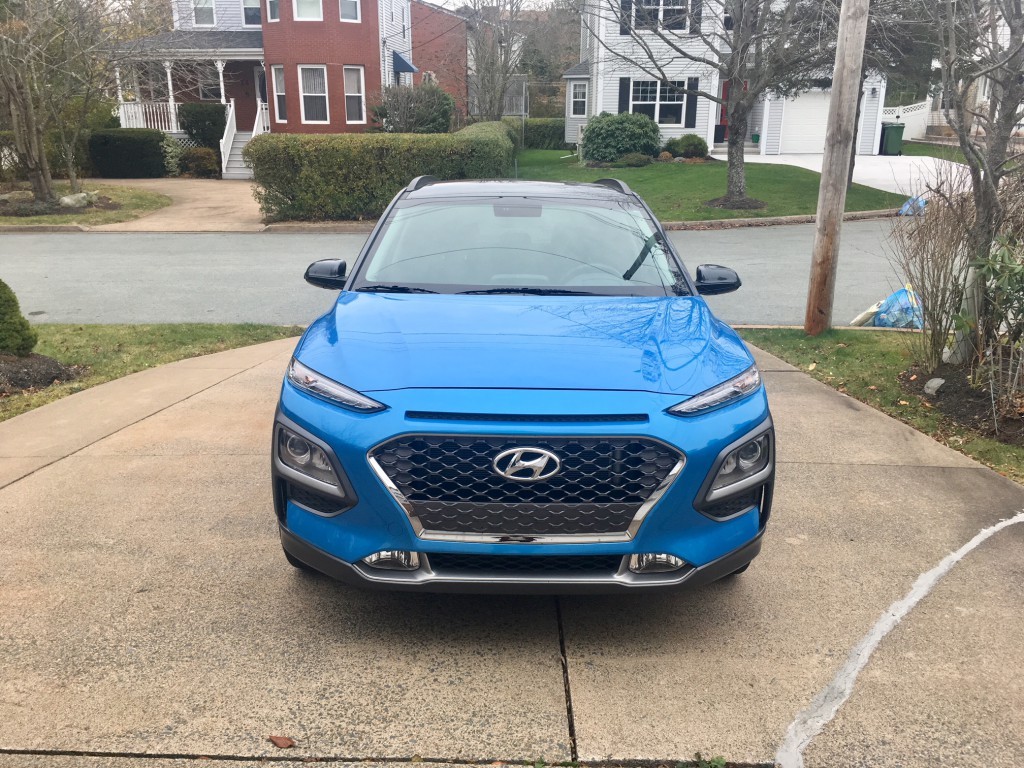 And thank goodness for that added ride height. I was scheduled for the Kona the week I was meant to pick up my fiancee from a four day stint at the hospital following hip reconstruction surgery. The Kona’s height was perfect for her to get in and out of with little pain or issues. In fact, the nurses wanted to make sure I was taking her home in a vehicle that wasn’t as low as her Ford Fusion, but to as high as a half tonne pick-up for instance. I reassured them that the Kona would do the trick and indeed I was right. 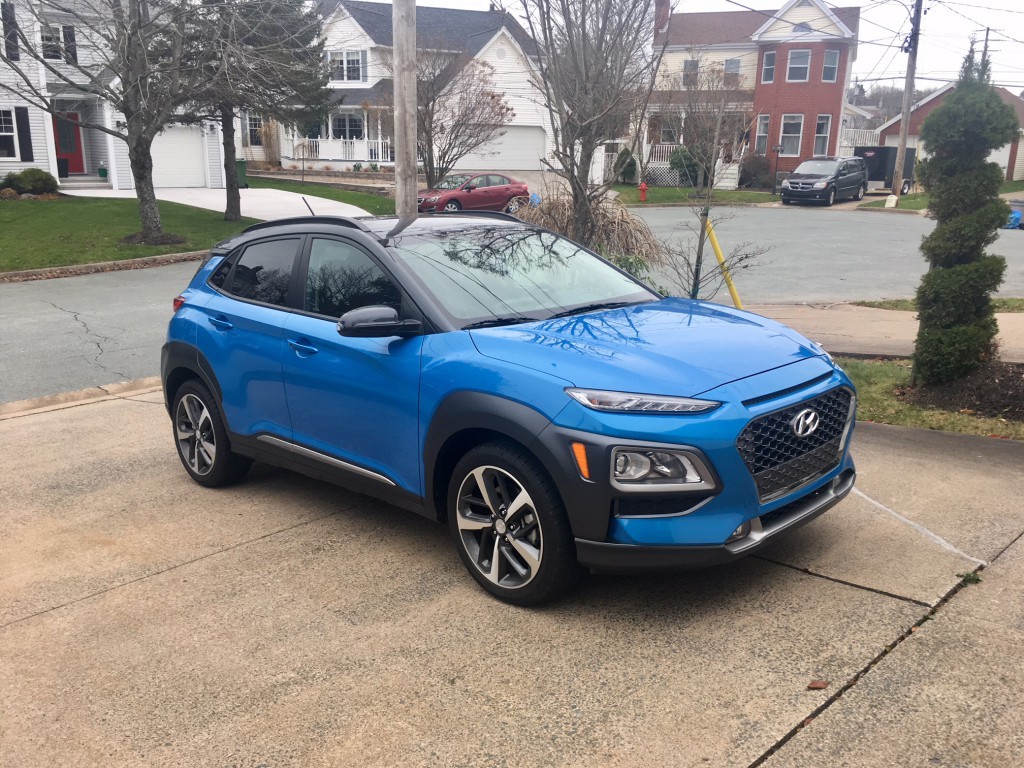 Another concern of mine was ride and comfort. The suspension in a BMW M2 with the competition package would likely and literally shatter all the hard work the surgeons had spent 4 and a half hours of their time on. While the Kona isn’t as comfy as a Buick, it certainly generated few complaints from all who took a drive in it, including my fiancee. It’s comfortable without feeling floaty. Bumps and potholes largely go unnoticed by occupants. Indeed, the Kona pulls off a trick very few vehicles can: remain comfortable while maintaining a good sense of confidence to the driver. 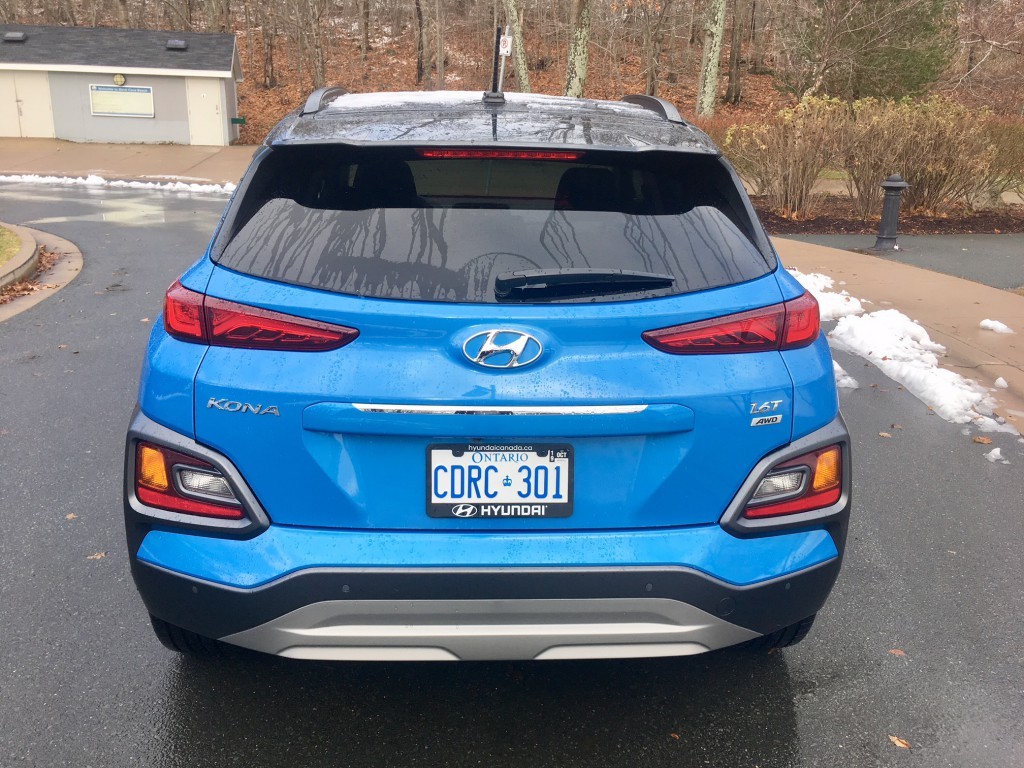 And let’s talk about that sense of confidence because the Kona is really only outdone by the Mazda CX-3 when it comes to handling and cornering abilities, in my opinion. Steering feel is dialled in nicely and no longer has that faux weighted feel of Hyundais of the past. In fact, that good steering feel remains regardless of which drive mode you’re in. 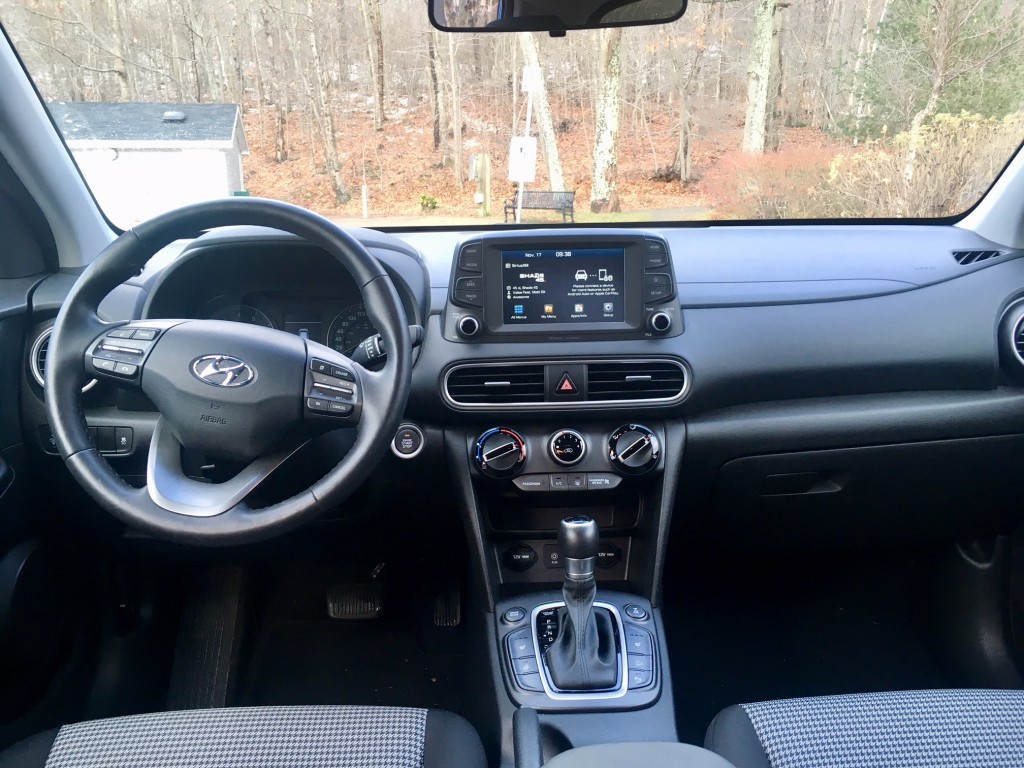 And speaking of those drive modes, they might as well not even exist. Honestly, there isn’t much different between eco, normal and sport. Sure eco mode neuters the Kona’s personality a bit more, and sport injects a shot of testosterone only slightly. But the Kona largely behaves the same regardless.

Braking feel is solid with little fade and confident stops. That, combined with its comfortable yet responsive handling abilities and solid steering feel makes the Kona one of the most – if not the most – well-rounded vehicle in the segment. 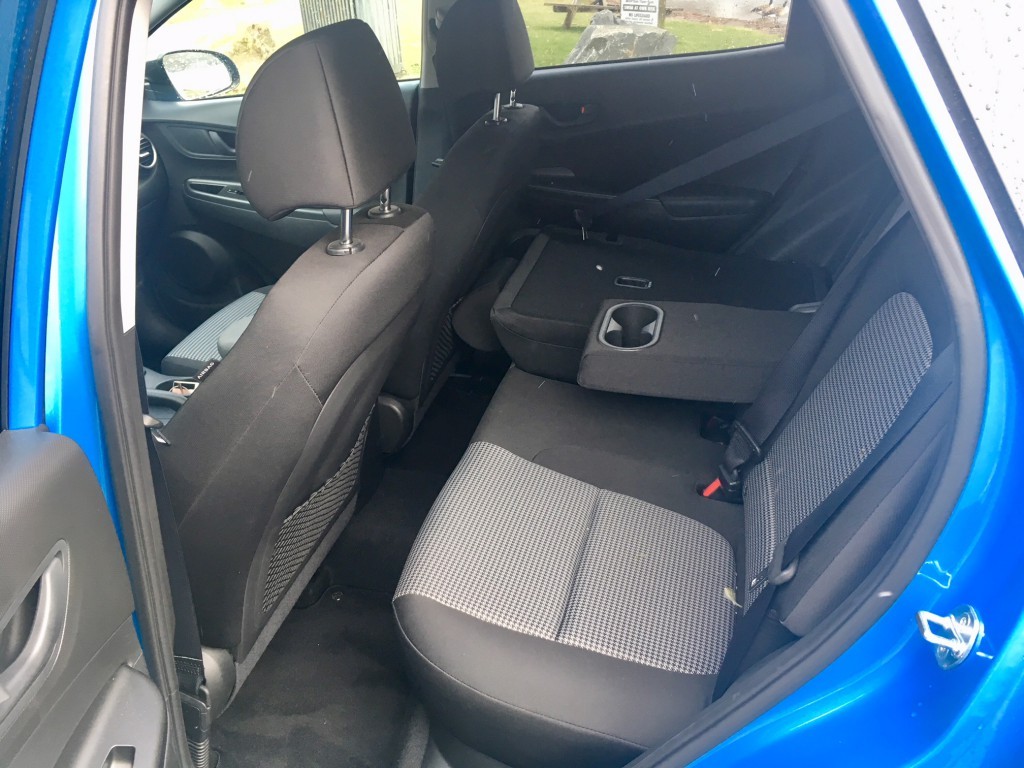 Of course, when driving my fiancee’s fragile new hip back from the hospital, I made every effort to curb my instincts of driving fun. It certainly didn’t help that my particular tester came with the range toping 1.6 litre turbocharged engine good for 175 horsepower and 195 pound foot torque mated to a seven-speed dual-clutch automatic (no manual is offered, unfortunately) under the control of my right foot, tempting me the whole way. A 2.0 litre making 147 horses and 132 pound foot torque is available in the lower trims but, without having experienced the latter yet, I can confidently say that the 1.6 is likely the engine you want. Power is not a problem and getting the little Kona to scoot up to speed is a breeze. Yes, the transmission provides noticeable lag at initial take off, but once it gets going, it gets going. 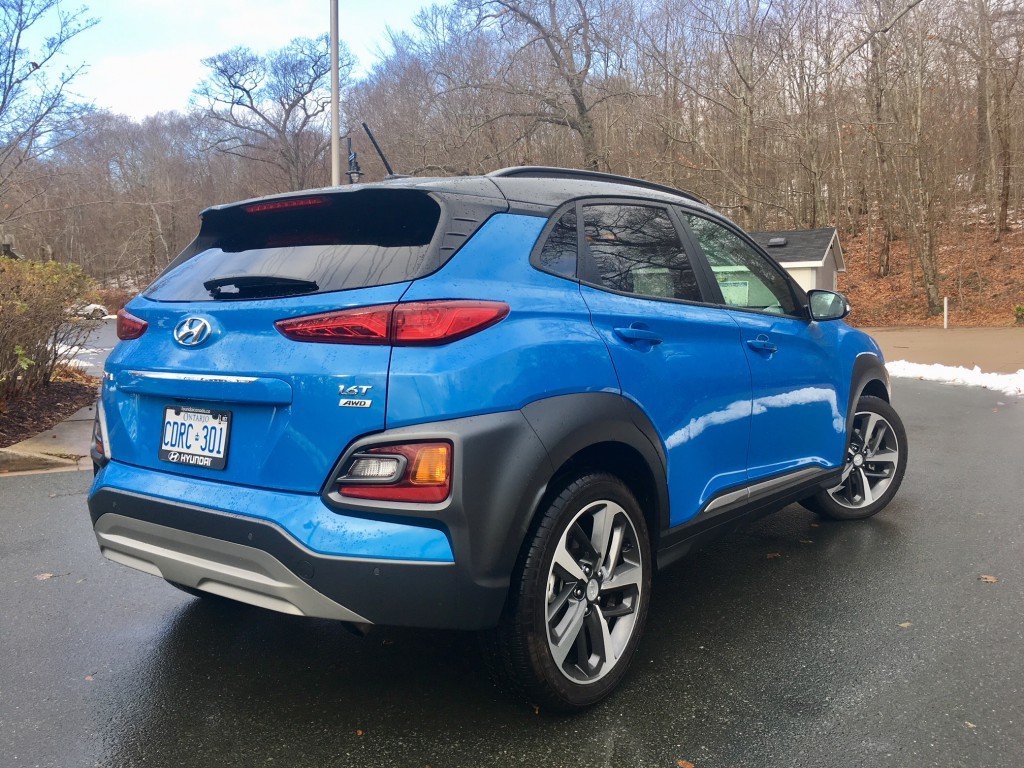 When pushed, engine noise intrudes into the cabin with the sort of off-putting sound most four-pots tend to make when pushed, but overall the experience is a pleasant one and most certainly won’t be left wanting more power. It is more than adequate for the every day Joe or Jane.

Official fuel consumption ratings come in at 9.0 L/100 kms city and 8.0 highway. During my week of mostly city driving, I returned 9.5 L/100 kms. Not terrible, but clearly there is a bit of a penalty at the pumps for opting for all-wheel drive. 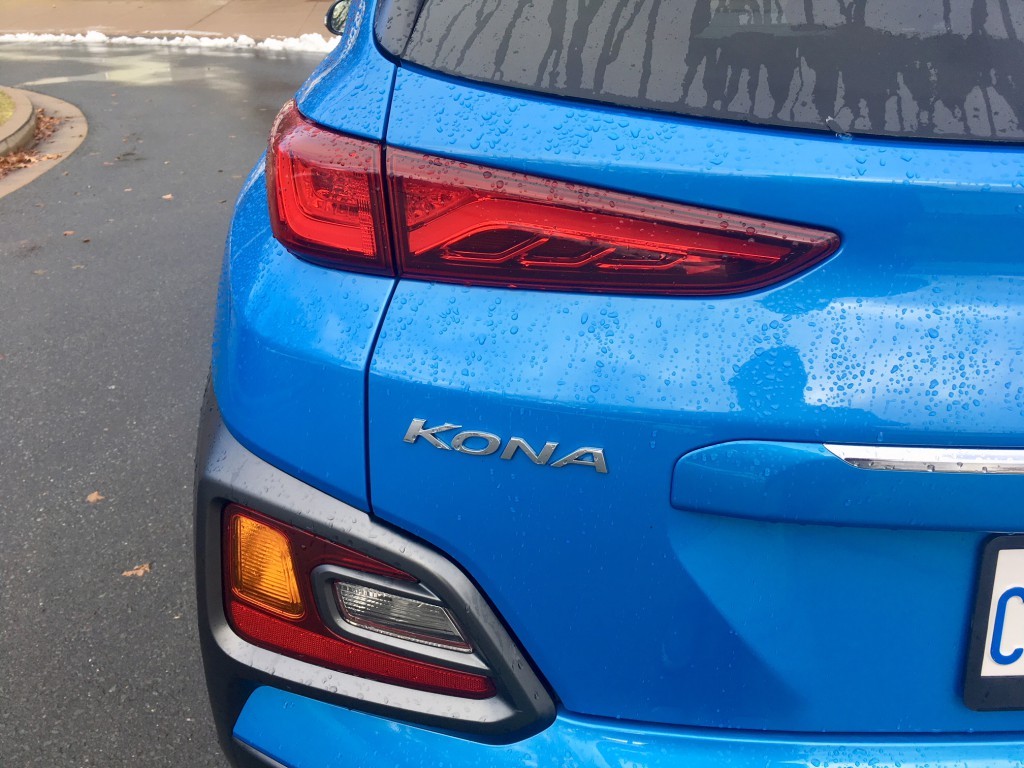 Inside, the Kona offers a uniquely style cabin that is both attractive and functional. As mentioned, getting in and out is a breeze and most should be able to find a comfortable seating position in all seats except the centre seat. There is good space both for cargo and people; more so than the exterior dimensions would suggest. Officially the Kona gets 544 L of cargo room which expands to just under 1,300 L with the rear seats folded down. That that’s better than the Mazda CX-3, but still middle of the pack in the segment. The Kona was able to swallow my fiancee’s crutches, but only with one of the rear seats folded down. 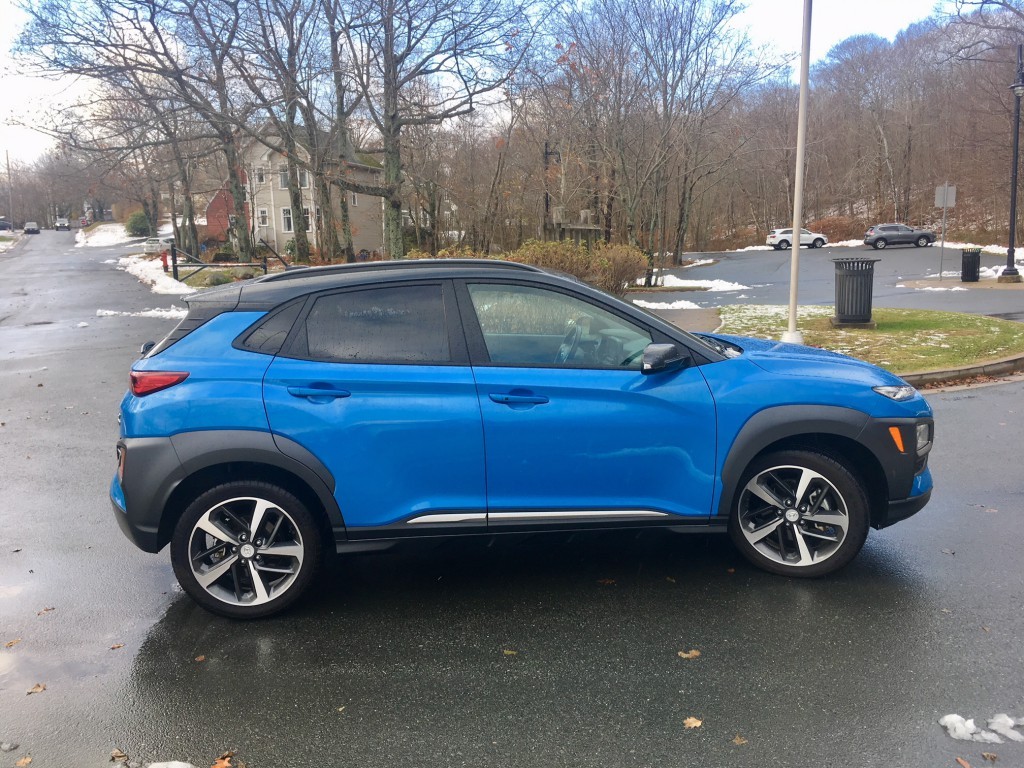 If you’re looking for tech, the Kona has plenty including Apple CarPlay and Android Auto compatibility, Sirius Satellite Radio (with the ability to record up to ten channels), keyless entry with push-button start and more. One notable feature is the head-up display which normally projects your speed along with other info onto the windshield. But in the Kona, it is projected onto a display with pops up behind the steering wheel. Mazda was the first to do this, but Hyundai is the only other automaker I can think of following suit. Personally, I don’t like it. The info projected is difficult to see and it still forces you to take your eyes off the road; you might as well just look down at the speedo. A true projection onto the windscreen is better, though I’m willing to bet Hyundai went this route as a cheaper alternative to keep costs low. In any event, you can keep the device from popping up with the push of a button if you don’t like it. 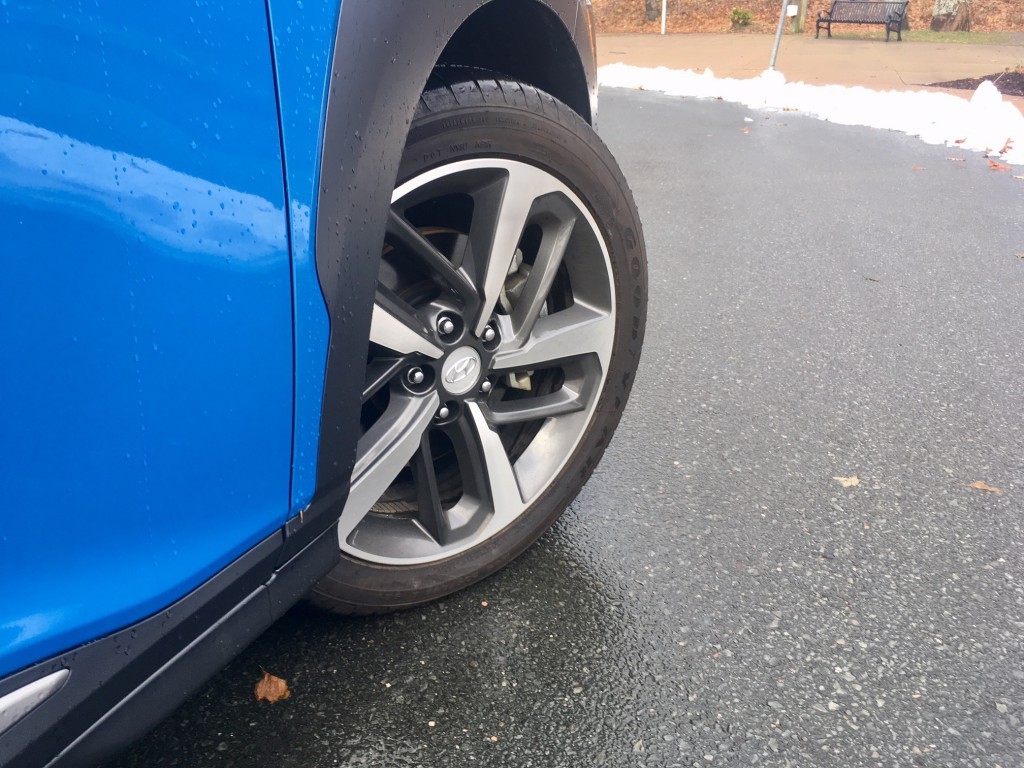 Among other notable features in my second highest Trend trim is a heated steering wheel (thank you!) with heated seats, an all-wheel drive lock feature, parking sensors and bluetooth.

So let’s get back to my original comment about the Kicks. Is it truly the value leader in the segment? It depends on how you look at it. The Kicks tops out at 23 grand for the most fully loaded model. The Kona tops out at 32 grand for the top trim. Seemingly the Kicks has a huge price advantage here, but there are a few things to consider:

1) the Kicks is slower than the Kona regardless of which engine is in the Kona. Much slower. And way less powerful.

2) the Kicks doesn’t offer all-wheel drive. If you want to compare a front-wheel drive Kona to a Kicks, the price point will be similar, starting at 21 grand. But all-wheel drive isn’t made available at all from Nissan’s offering.

3) while impressive in its own right, the Kicks cannot compete with the level of comfort, handling and overall performance that the Kona offers. 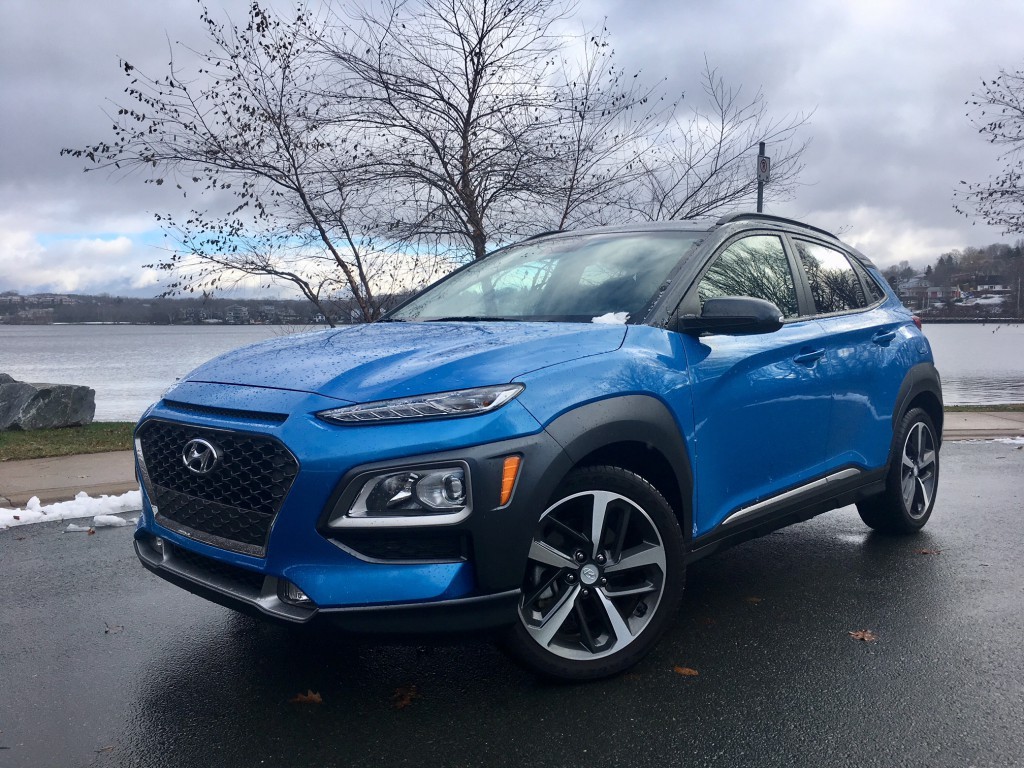 So, it largely depends on what your priorities are when car shopping. If you’re looking for an all-wheel drive, performance capable (caution: I use that terminology loosely), comfortable, versatile sub-compact crossover, you’re doing yourself a huge disservice by not including the Kona on your shopping list.

It is, in my opinion, easily top three in the segment.