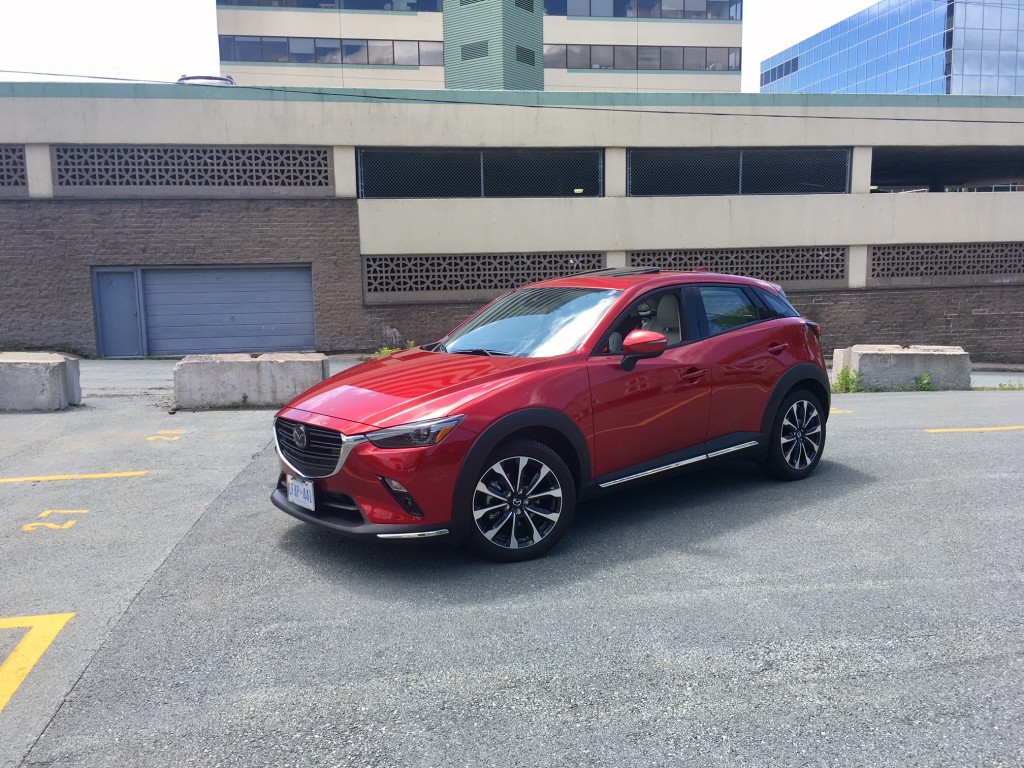 Sometimes you can really tell when a manufacturer has a sales winner on its hands. For me personally, it starts to become obvious once they keep sending me the same vehicle for review. It means the earned media generated from doing so is absolutely worth it for them.

Case in point is the Mazda CX-3. This vehicle has only been on sale since the 2016 model year, but already I have driven and reviewed it twice in that short amount of time.

Well, make that three times now, because here I am yet again delivering my thoughts on the CX-3. 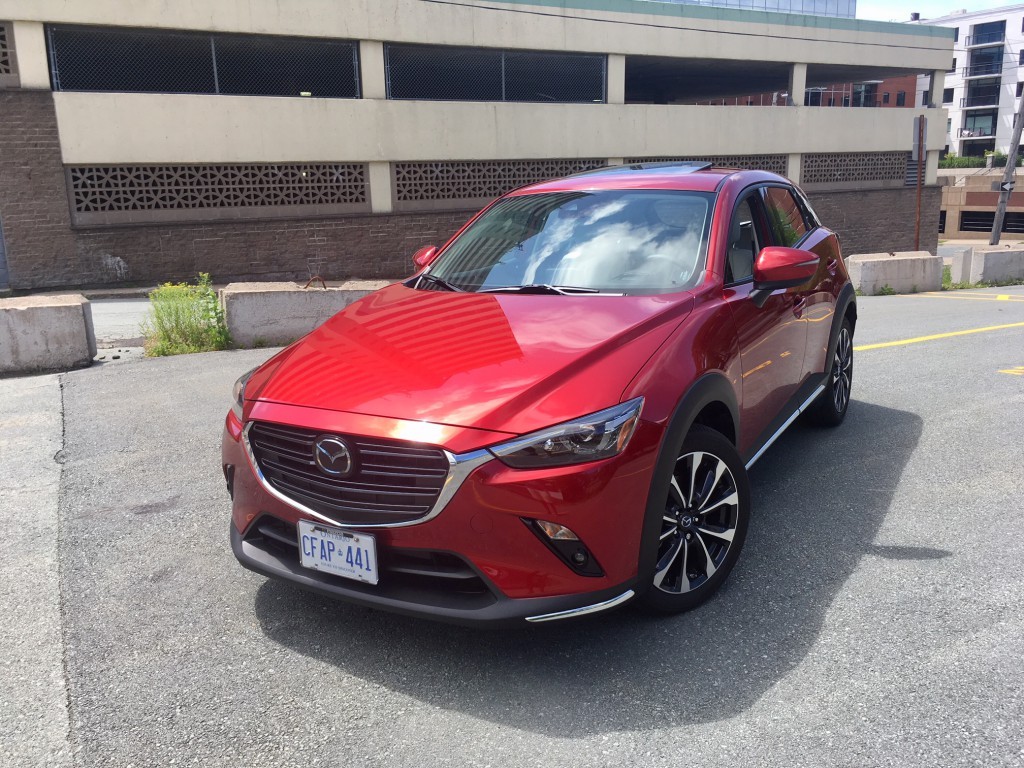 This time, however, Mazda has given its smallest crossover a mid-cycle update, though you’d be forgiven if you couldn’t tell from the outside. It is the same general shape, and same general design cues, however small tweaks here and there to the grille and bumpers have been incorporated, plus there’s now new wheel designs. If you end up in the top of the line GT trim, the tail lights are also redesigned to mimic the tail lights of big brother CX-5 and even bigger bro CX-9. 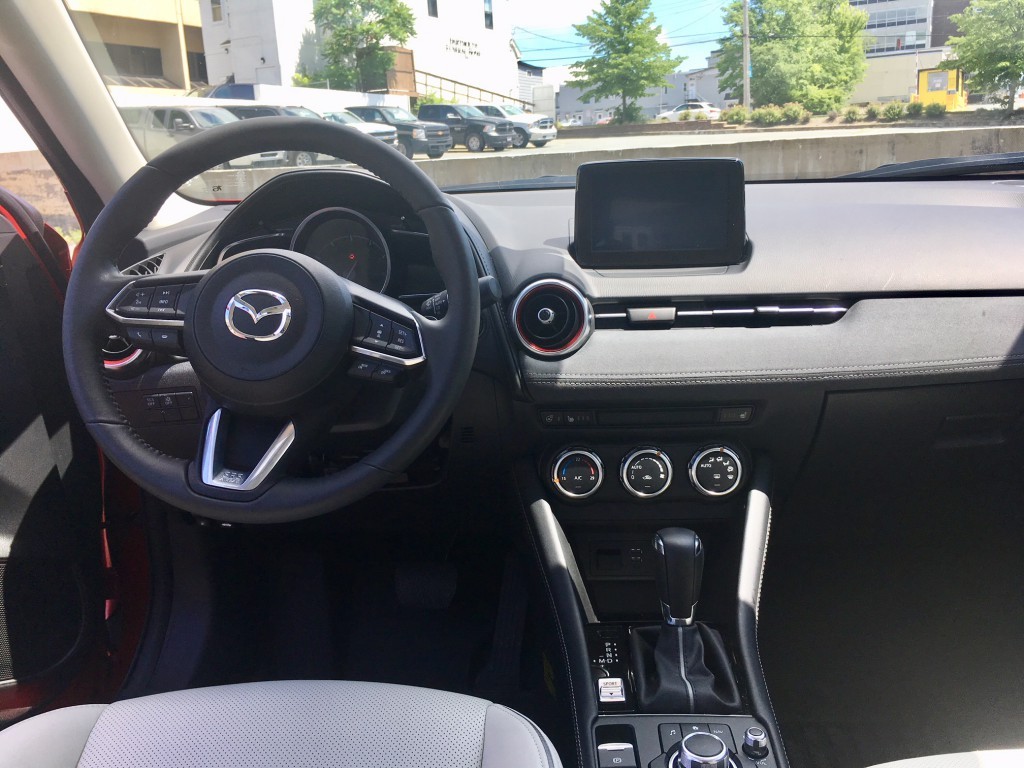 Inside is where the biggest change occurs. The centre console and the arrangement of the shifter and cupholders have been cleaned up. The parking brake is now electronic, freeing up more room for the controls for the infotainment system to be moved to a more logical place between the seats. Before, reaching the controls were fairly awkward. 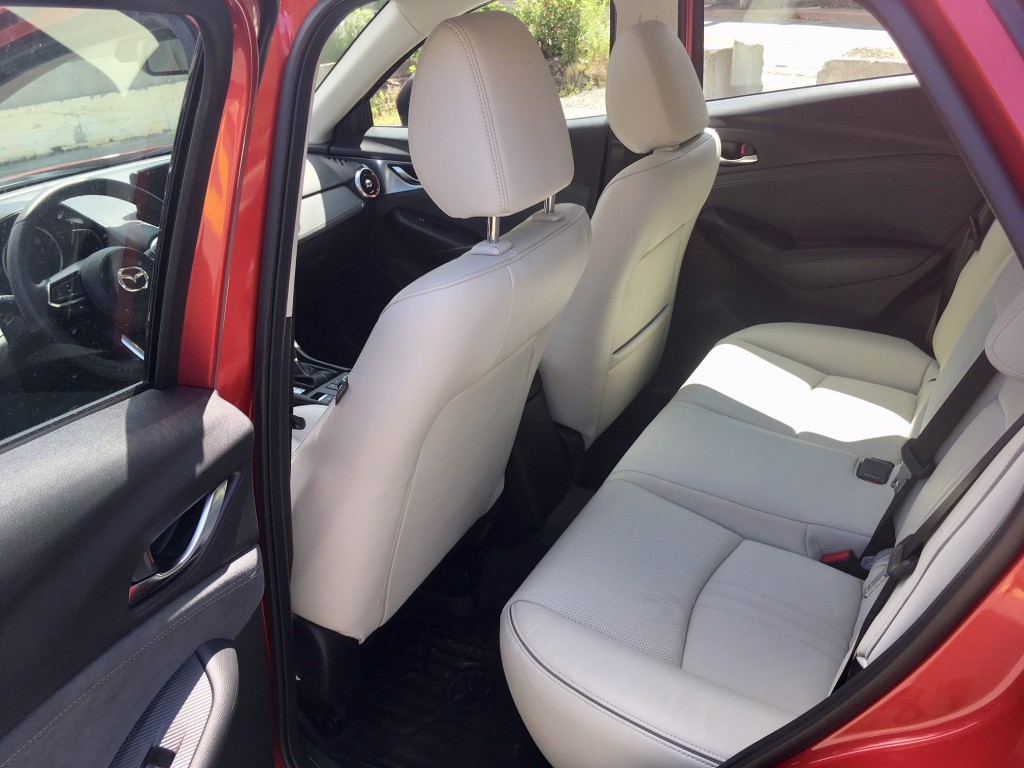 Otherwise, it’s standard Mazda fare which isn’t necessarily a bad thing. Even in Mazda’s smaller and cheaper offerings, the interior design and fit and finish tend to be above par. Though after driven many many different vehicles from many different manufacturers, I can safely say that Mazda’s infotainment unit is starting to get quite long in the tooth. The layout doesn’t seem nearly as intuitive as it first did and the screen itself seems quite small. It’s still a complicated process to use. Simply changing the radio station, for instance, can be a three-step process. It’s also confusing because technically it can be used as a touch screen but only when the vehicle is stationary. On top of that, it is not compatible with Apple CarPlay or Android Auto. 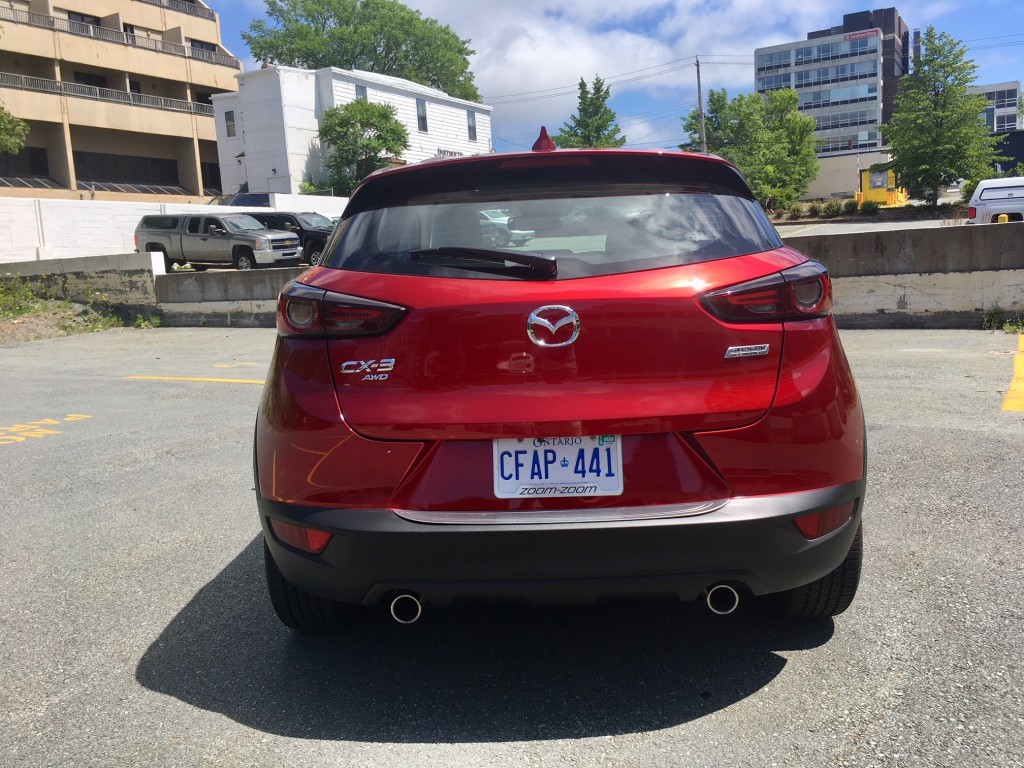 There are now many more safety features available including adaptive cruise control, adaptive headlights with automatic high beams, lane departure warning and rain sensing wipers to name a few. Some of these features aren’t available on even the top trim of its competitors, so the CX-3 is dipping its wheels into the value game a bit. There is a head up display, but it is fairly useless as the information isn’t projected onto the windshield like most HUDs, but rather it’s onto a piece of flimsy looking plastic that rises from behind the steering wheel. The whole point of HUDs is to keep your eyes from deviating too much from the road. With this effort, you might as well be looking down at the speedometer anyway. 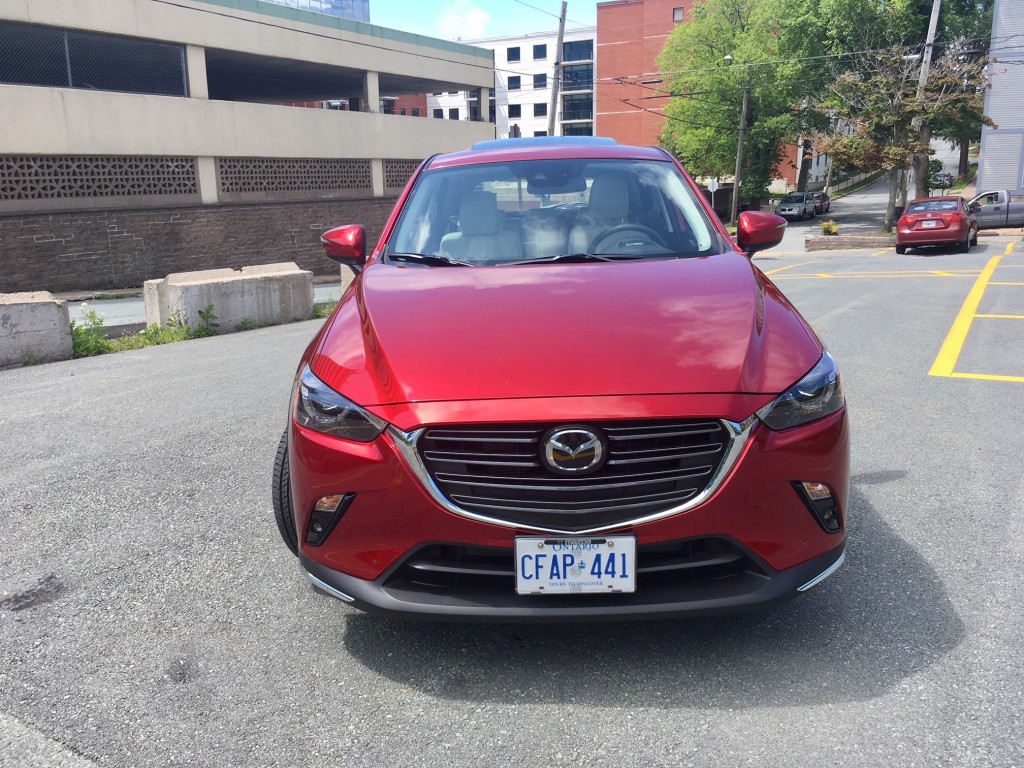 Space is still a bit tight, no matter which seat you’re relegated to. In fact, the CX-3 has less interior and cargo space than a Mazda3 hatchback. Still, my 5 foot 11 frame was able to find a comfortable seating position. Those relegated to the back seats will find head and leg room to be lacking if they are taller, though smaller children should have no issues. The CX-3 is a narrow vehicle, so realistically you could only fit two adults in the rear seats, not three. The rear seats can fold completely flat revealing just under 1,500 litres of room with the seats folded down, which isn’t bad, but it is easily bested by rivals. 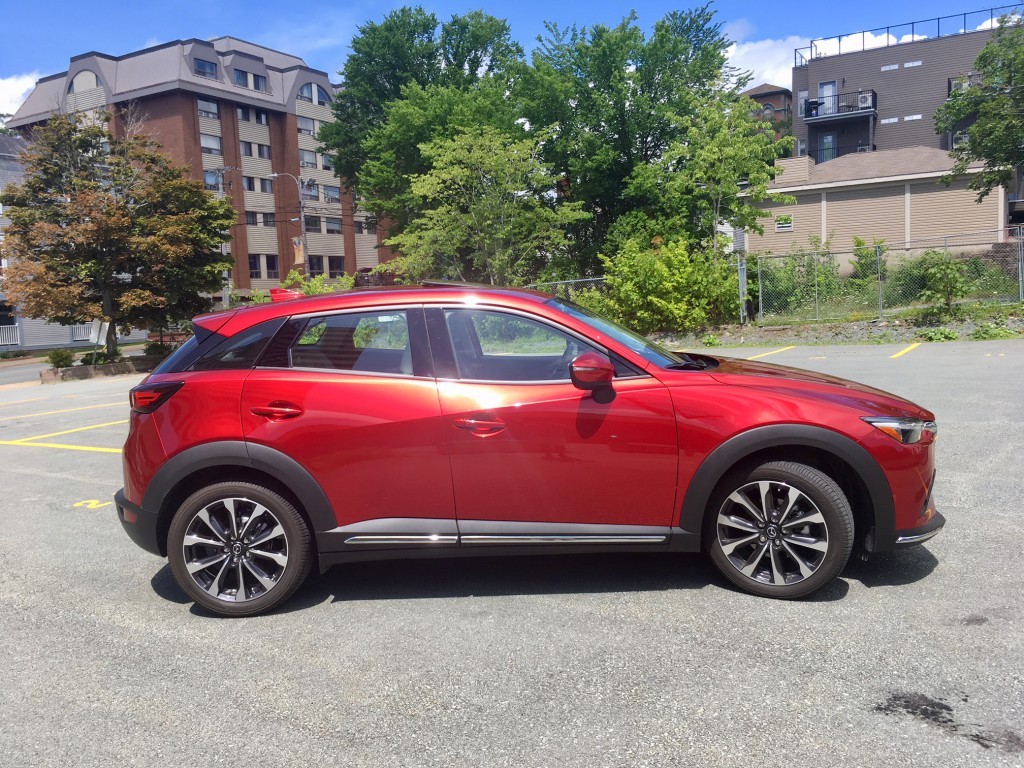 The CX-3 looks fantastic from the outside, but outward visibility is compromised thanks to those swooping lines. The rear window is positively small, but thankfully a back up camera is there to help out, though picture quality could be better. 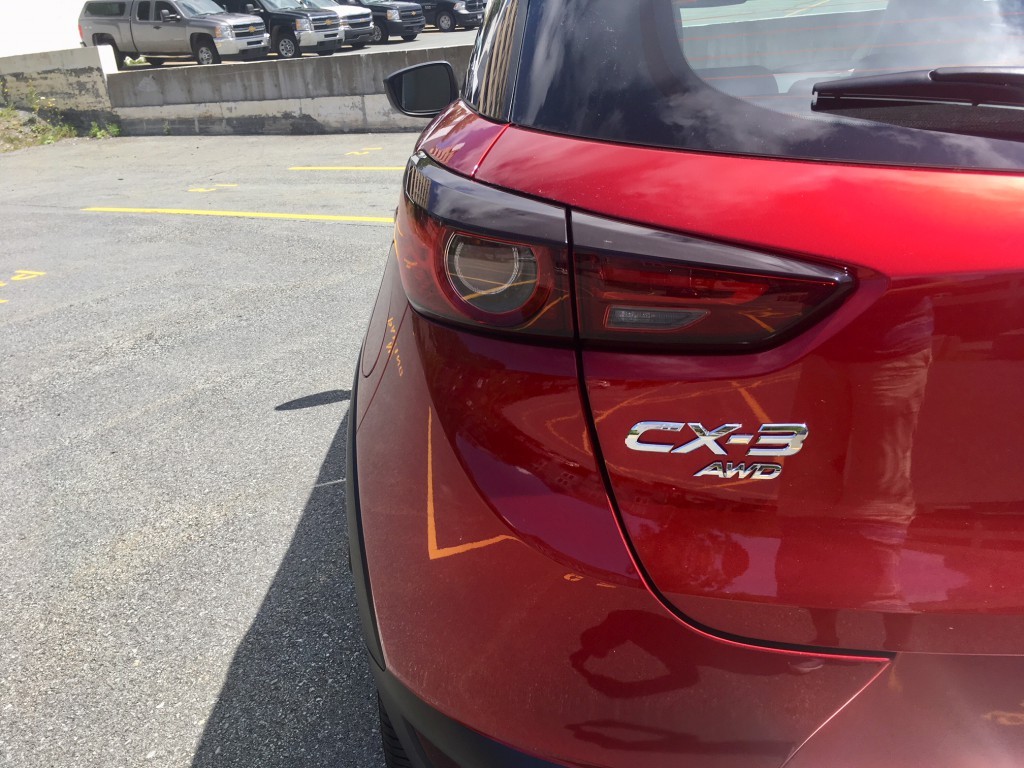 Another small change for the 2019 model year is a ever so small bump in power. The CX-3 now produces 148 horses – up two – and 146 pound foot torque. With new players in the form of the Ford Ecosport and Nissan Kicks making significantly less power, the CX-3 has an advantage here, especially since the low end torque likes to come into play from the onset. That power is mated to a nice shifting six-speed automatic, and you may shift gears yourself via paddle shifters if desired. When it’s all said and done, the CX-3 will sprint from 0-100 in about 9.2 seconds. Not bad, for the class. 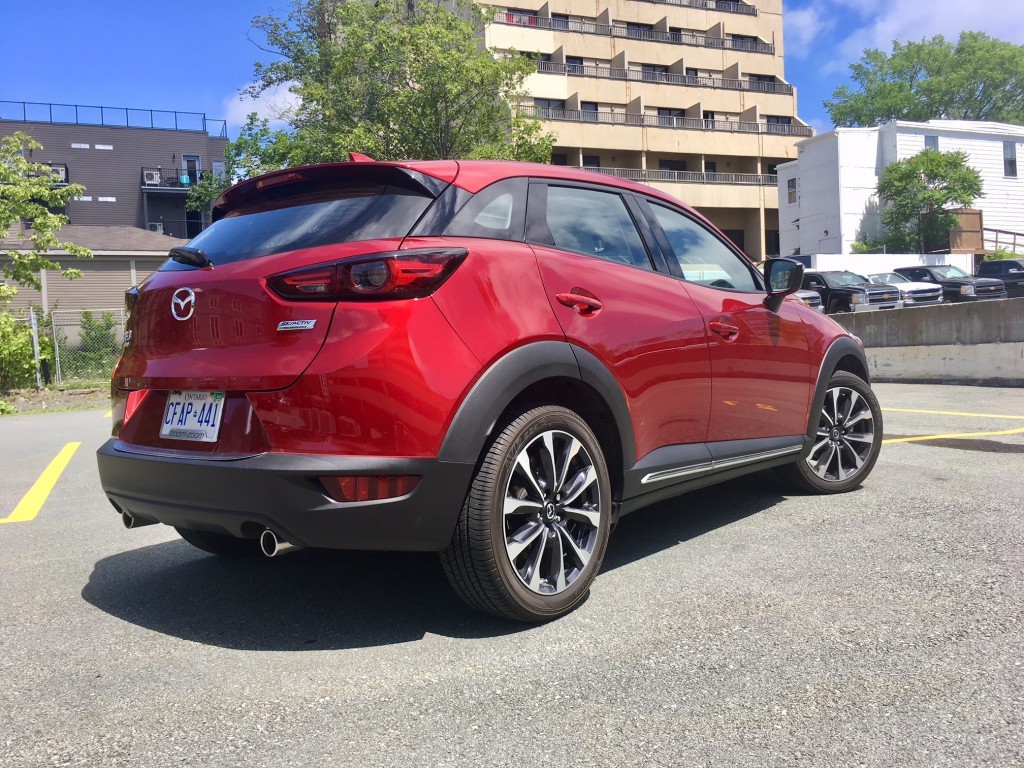 But the biggest advantage the CX-3 offers against its competitors is its handling abilities. It continues to impress, in fact, it seems to be even more nimble and responsive than the last two times I tried it. It is easily the best handling in segment and while I wouldn’t go so far as to call it an MX-5 with two doors and a hatch, it is probably the closest to it in the Mazda line up. It also offers decent comfort over bumps and potholes. 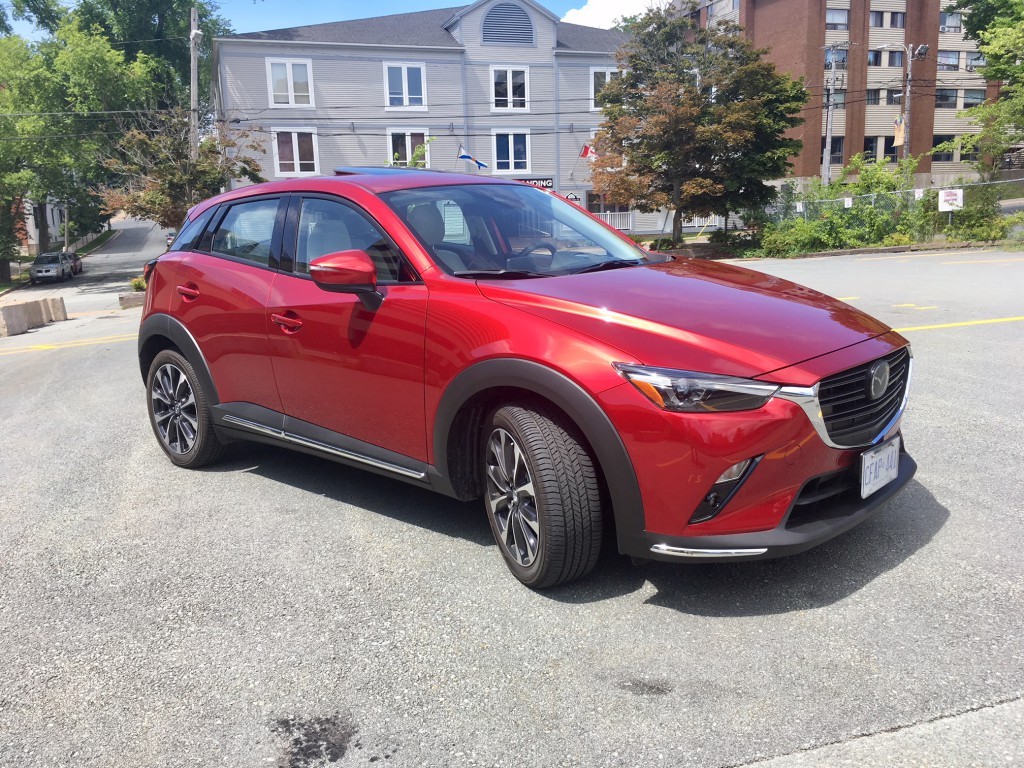 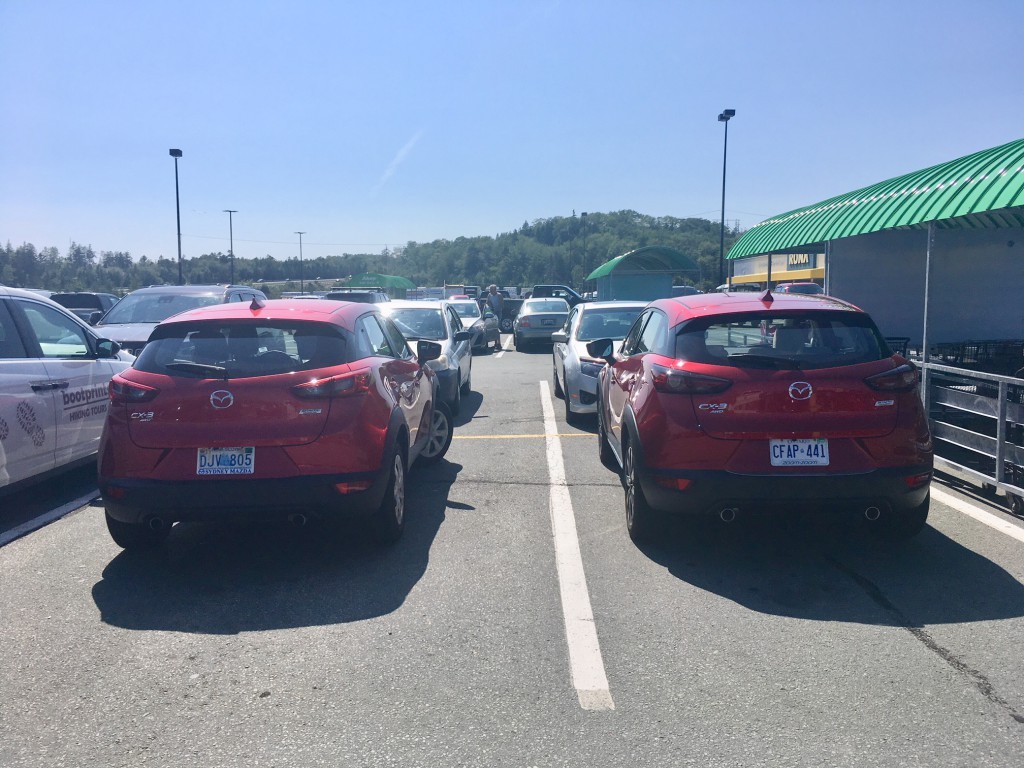 There’s no doubt that the Mazda CX-3 continues to impress with its strong handling and overall performance abilities, along with a premium feeling interior and better functionality. But a lack of space, an outdated infotainment screen and poor outward visibility might be an issue for some. However, if you are looking for a small, all-wheel drive vehicle that is oodles of fun to drive without breaking the bank, the CX-3 certainly delivers and its mid-cycle refresh ensures it stays relevant in a very hot segment of the industry. 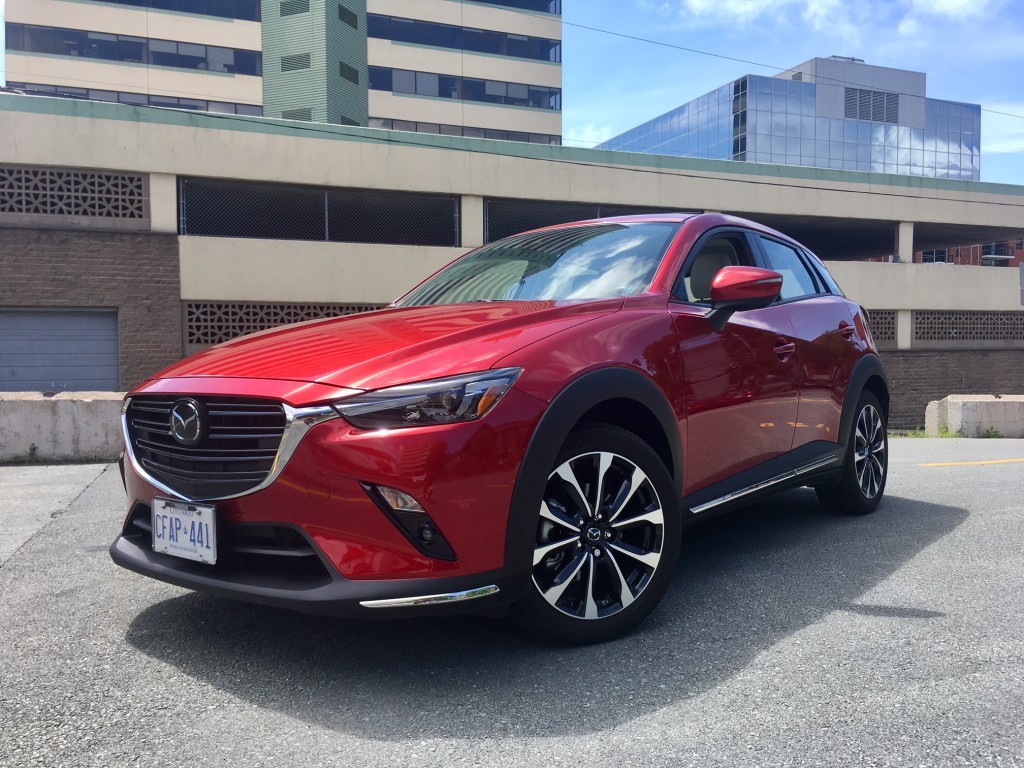