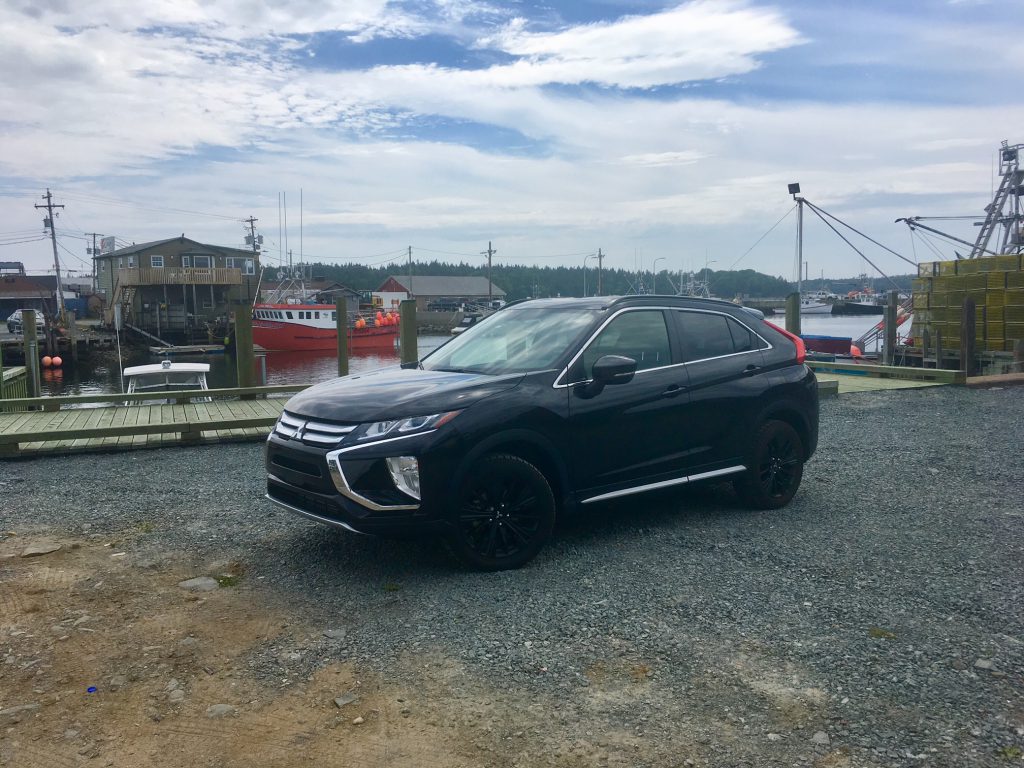 Even though I admit that I have a perhaps questionable soft
spot for Mitsubishis, according to research conducted by Mitsubishi, I’m not
necessarily the target of their latest effort. The new Eclipse Cross has been
in sale for a year now, but already Mitsubishi is noticing that it’s catching
the attention of women in their 40s. Specifically, women who aren’t quite
boomers and who fancy themselves as the stylish adventurous types are taking
notice.

Still, even though I’m not their target market, I found the
Eclipse Cross intriguing when
I tried it last year.

So when I found out I’d get the chance to drive the Eclipse Cross again a mere year later, I was fairly eager to remind myself about how it drove and what I like and didn’t like.

After seeing the Eclipse Cross at the Canadian International Auto show a few years ago in person, I quickly warmed up to its looks. And for 2019, Mitsubishi has added a new trim meant to enhance the exterior styling even further. The Black Edition adds exclusive black paint, painted black alloy wheels, black trim and black roof rails. Black is personally a favourite colour of mine for almost any vehicle and this all black look makes the Eclipse Cross look particularly stealthy.

The elephant in the room can still be found out back, but I personally don’t mind the chunky tailgate styling matched with tail lights than spawn across the middle of the rear windshield. The more I see them in the wild, the more I think the look really isn’t that bad. But some people don’t like the chrome bits and find the headlight and fog light designs to be a bit over the top. Therefore, ‘polarizing’ is the best way to describe the Eclipse Cross’s style.

The interior styling is much more agreeable because despite the mass amounts of piano black trim and the lack of any bright interior colours in general, Mitsubishi did a decent job mimicking interior designs from Lexus. Yes, Lexus. The centre stack has the same shape and it uses a track pad to operate the infotainment system too. Speaking of, while it’s not the worst system in the world, it could certainly use a fairly major overall. The touchscreen doesn’t always respond to commands and the layout is cluttered causing you to hit a function you didn’t intend to. And since there’s no hard buttons to operate it, you need to use either the pad or the touch screen to do a simple task like change the radio station. Also, either Mitsubishi is just a bit rebellious or they don’t tend to read automotive reviews of their competitors because I don’t know how any manufacturer can offer new product without a volume knob these days considering the lashing the automotive press gave Honda for doing the same thing (Honda has since listened and gave us back our volume knobs). But overall the layout is quite appealing.

Interior room is better than expected considering the size. Rear foot and knee room is excellent, partially thanks to the rear seats being able to slide significantly fore and aft. However, the sloping roof makes for a slight compromise on rear headroom, but it should still be adequate for most. Cargo room is competitive for the segment, though the hatch opening is a bit on the narrower side. But as far as crossovers go, it does the trick in terms of practicality.

For features, Mitsubishi might have given the value focused Korean brands a bit of a run for their money. For instance, all-wheel drive is standard across the board as is 18-inch alloy wheels, LED tail lights, automatic climate control, heated seats (smart move in Canada), heated mirrors, the aforementioned 7-inch infotainment system, and satellite radio to name a few. If you move up the trim latter you can add such niceties as LED headlights, a head-up display, leather seats, heated steering wheel, heated rear seats, rain sensing wipers and more.

Only one engine option is available and it’s a 1.5 litre turbocharged 4-cyliner which produces 152 horsepower and 184 pound foot torque mated to a continuously variable transmission (CVT). The end result is a competent pairing that largely does what it’s asked to do without much fuss. It’s more than adequate for trotting about around town with good pull when needed, but harder acceleration, such as from on onramp onto the highway causes it to lose steam. There’s an eco mode but it has got to be one of the most aggressive eco modes I’ve driven in a long time, meaning it really prevents you from any sort of hard acceleration. Even normal acceleration turns up with the same result. If saving gas is a top priority for you, get a hybrid. But truthfully, the Eclipse Cross holds is own for efficiency in regular mode, so there’s no real need to use eco mode unless stuck in stop and go traffic.

The transmission itself is actually decent. The CVT shifts as if it’s a regular transmission and the integrated fake gears can be cycled through manually via the most awesome paddles in the segment, or even this side of $80 grand. I absolutely love Mitsubishi’s paddles as they look sporty, feel substantial and are properly mounted to the column and not the steering wheel itself. The fake gears shift quickly and smoothly to boot. I found myself using them a lot during my time with the Eclipse Cross. Well done on this front, Mitsubishi.

The Eclipse Cross is no Buick; you’re still going to feel bumps and other imperfections in the road, but it’s not jarring and is really only noticeable if you are particularly paying attention to such things. The seats are decently comfortable and supportive. And in addition to the rear seats that slide forward and backward, they can also be reclined making for additional comfort.

On road feel isn’t bad, the steering is extremely light making aggressive cornering a bit of a challenge, but this can be forgiven since the main purpose of this vehicle is to get those 40 something stylish women to their next adventure. Still, even without aggressive cornering body roll is noticeable. But the lighter steering makes for ease in parking lots at least.

As mentioned, every trim of the Eclipse Cross gets all-wheel control, but if you get any trim but the base, you’ll get Mitsubishi’s Super All-Wheel Control system as standard. This system is unique in that is monitors speed and steering and uses torque control and braking to help guide you through a corner. I tried its capabilities out on a gravel road and it proved to be quite effective in keeping the Eclipse Cross from getting too much out of sorts. I can only imagine how well it would perform in the ….*whispers* snow *shutters*. But let’s not think about that word in the middle of August.

The official fuel consumption ratings come in at 9.6 L/100 kms in the city and 8.9 highway. After a week’s worth of mixed highway-city driving I returned 9.0 L/100 kms. That is impressive considering I only used the Eco mode once, merely just to evaluate it, and I took a lot of shorter trips too.

But even though I’m not a stylish 40-something woman, I still find the Eclipse Cross to be an appealing vehicle in the segment. There’s nothing that looks like it, it has good versatility, an excellent all-wheel drive system, is good on gas and offers good value for money. It even gets itself a Top Safety Pick from the IIHS.  The Black Edition enhances its uniqueness but just don’t leave it parked in the sun for too long. I burned by hand on the door handle a few times.

With the Eclipse Cross though, considering all of the above
and an incredible 10-year powertrain warranty, you aren’t likely to get burned
in the long run.

This vehicle is definitely worthy of your consideration.