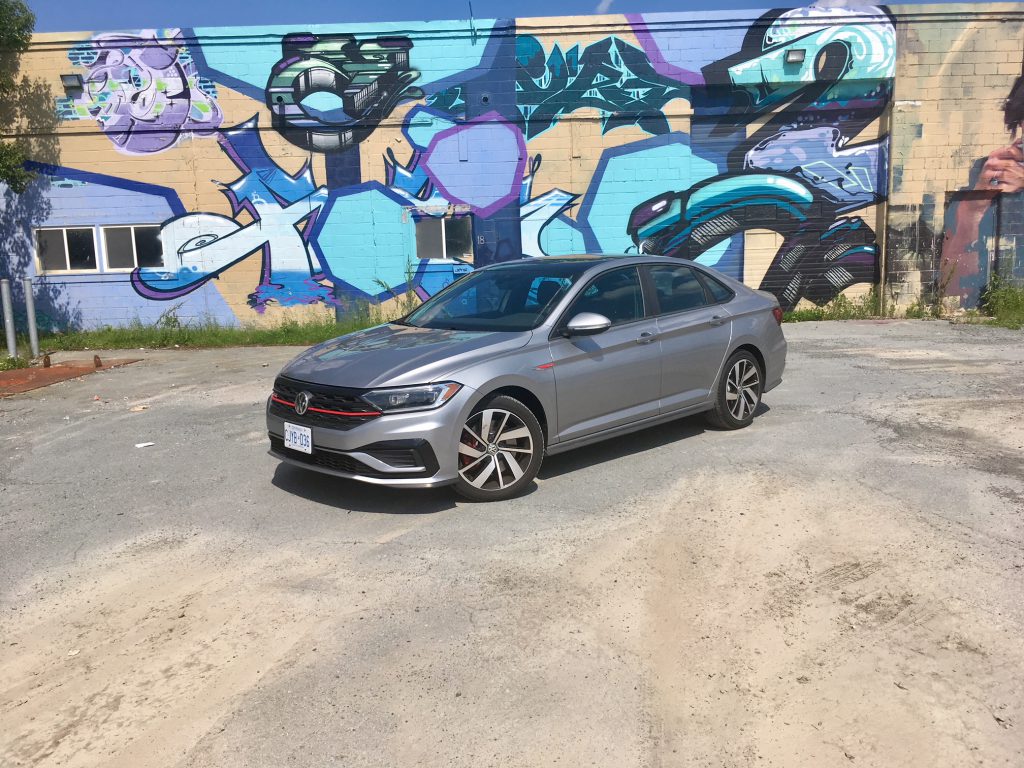 In the automotive industry these days, all you hear is SUVs this
and pick-up trucks that. Certain automakers are betting heavily in these
segments and it’s getting to the point where you’d think there is no room
anymore for the traditional passenger car.

Nuts to that, says Volkswagen. While the German automaker
holds strong SUV sales, the majority of its lineup comprises of sedans,
hatchbacks and wagons.

One of its best known sedans, the Jetta, is still selling
well despite the SUV hype. They recently redesigned it and I
had the chance to review it last year.

At the time, the 1.4 turbocharged engine was the only option
available. And while I came away impressed with its performance, the 147
horsepower it produces certainly couldn’t be described as thrill inducing. While
most normal folk probably wouldn’t notice, the Jetta’s torsion beam suspension
set up in the rear is not the most ideal for planted corner carving.

I wasn’t too worried though because Volkswagen is a company that understands performance. And the GLI has a storied history as the trunk-laden alternative to the GTI. For 2019, the GLI is back.

There are several ways to tell the GLI apart from your run of the mill Jetta. The most obvious would be the red GLI badging but there’s also a red strip on the grille to match along with unique 18-inch wheels and dual exhaust tips with a lip spoiler out back. I was a little unsure about the new redesign of the Jetta in general but the GLI seems to address much of my styling concerns. Overall, it’s subtly aggressive.

This year the GLI, which stands for Grand Luxury Injection by the way, turns 35. VW is celebrating with a 35th anniversary edition featuring unique styling cues such as unique 18-inch wheels, but it also adds some standard tech like a virtual cockpit (which is very Audi-esque), dynamic chassis control, front shock absorbers and a Beats audio system. Special 35 edition badging is placed throughout.

Inside is a nice blend of luxury and sportiness. The GLI gets a unique flat-bottomed steering wheel, for instance, and there is red stitching throughout. The seats are on the good side of firm and bolstered appropriately. The cockpit layout is more driver focused with the 8-inch touch screen being angled more towards the driver.  The infotainment itself operates logically and relatively quickly as well. The only real gripe I have is that the screen shows finger prints quite easily. Both Apple CarPlay and Android Auto are available. Navigation is standard on the GLI as is heated and cooled seats. The latter was very much appreciated during my time with it.

The Jetta has grown with each passing year. It started off as a compact sedan but could now be easily described as a mid-size. As a result, interior is more than adequate for most, as is cargo space with over 14 cubic feet of room. The rear seats also fold for added versatility.

Now let’s get to the reason why anyone would take a GLI over a regular Jetta in the first place. The GLI gets a 2.0 litre turbocharged engine that produces 228 horsepower and 258 pound foot torque. That’s an 18 horsepower and 51 pound foot torque increase over the previous generation. It can be mated to a seven-speed DSG or a six-speed manual. The row yourself option was thankfully fitted to my tester. The DSG is good, but get the manual. The throws are accurate, if a bit long, but the satisfaction is there 100 percent of the time.

But regardless which transmission you choose, you’ll end up with a sleeper type of vehicle. This thing is quick, there’s no other way of putting it. Sure, the DSG can shift quicker, but the manual provides the same amount of thrills in my opinion with added control.

There’s different driving modes such as comfort, sport and individual. Since I prefer a firmer set up and am unbothered by a bit of jolting, I usually get my wife to give her opinion on the firmness of a vehicle’s ride. To my surprise, she didn’t find it overly jarring in sport mode. Needless to say, there were no complaints in comfort mode either.

The GLI gets an independent suspension in the rear which helps with comfort, but quite frankly it also helps with its stance too. The regular Jetta’s torsion beam makes the rear look like its wearing high heels, but the GLI’s independent sport suspension actually allows for a drop of 1.5 cms. And while I thought the torsion bean set up was perfectly adequate in the regular Jetta, the new suspension set up in the GLI makes it better. The ride is smoother, there’s less body roll and more precision and confidence inducing cornering. The GLI has grown to be a large vehicle, and it sometimes is noticeable when it’s pushed. It also produces a bit of noticeable understeer when pushed to the limit.

For those moments where you aren’t driving spiritedly, the GLI remains quite tame. It doesn’t really pipe up until you put your right foot down. When you do, that torque is readily available in the low end.

For regular driving around town, the GLI will reward you with decent fuel consumption. It is officially rated at 9.3 L/100 kms in the city with the manual transmission and 7.3 in the city. The DSG gets the same city rating but does slightly better on the highway at 7.2. My real world mixed driving returned a fairly decent 7.9 L/100 kms.

But the real story with the GLI is perhaps its value when compared to its hatchback sibling, the GTI. The GTI in top trim can push nearly $40,000. If you load up a GLI with every option, it chimes in around $35,000 and believe it or not, you get more features. While I personally prefer the looks and versatility of a hatchback, this is one of those times when getting the sedan makes way more sense.

But regardless of which you choose, you’ll be proving to the
masses that there’s still a demand for good, traditional performance cars.
Manufactures can make performance versions of SUVs all they want, but nothing
feels quite as right as a sedan or hatchback with a ton of power, good
suspension and a six-speed manual. On that font, I’m pleased to report that the
GLI delivers.