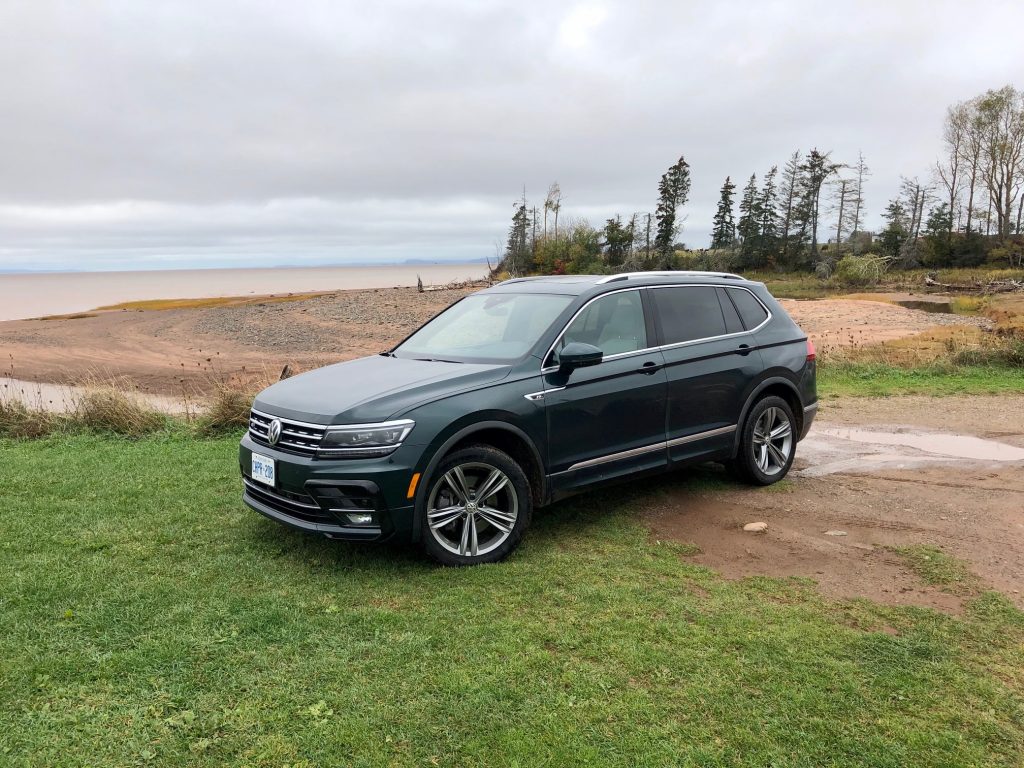 In many ways, I think the current Tiguan is worse than the previous generation. It’s slower, less nimble, more tuned for comfort than performance and generally doesn’t stir much emotion.

However, the new recipe for the Tiguan is generating a lot of sales from customers hungry for SUV’s that look rugged, but are quiet, comfortable and versatile, so what the hell do I know? Performance be damned I suppose.

But there’s a package available on the Tiguan that might hint a bit more effort put into performance: the R-Line.

Sadly, after taking the Tiguan R-Line out for a week, there was nothing to talk about regarding performance. Indeed, the R-line package is merely cosmetic. It adds admittedly rather nice looking 19-inch wheels, aluminium door sills with the ‘R-Line’ logo, black headliner, stainless steel aluminum pedals and R-Line exterior badging. All that will set you back about two grand.

Inside the style is typically Volkswagen which is to say somewhat bland and practical, but nicely laid out with high quality materials. About a year ago I drove the then recently redesigned version of the Tiguan and noted a huge improvement over interior space. However, the model I tested did not come with the optional third row seating for $760. This particular Tiguan R-Line did have that option ticked off and I have to say, I take back the ‘lots of interior space’ comment with the third row included. Skip the third row altogether. It is particularly challenging to access and with the third row of seats up, it really eats into interior storage. Even with the third row of seats down, you still don’t get as much cargo room as a Tiguan with just two rows of seating because the mechanisms in place to raise and lower the third row take up space making for a higher load floor. If you want a Volkswagen with third row seating, bite the bullet and get the Atlas.

There’s still only one engine and transmission available and they are a 2.0 litre naturally aspirated 4-cylinder and an eight-speed automatic. The engine produces 184 horsepower and 221 pound foot torque. The end result is a vehicle that feels a bit underwhelming when it comes to power, especially when compared with the turbocharged 2.0 litre that used to come with the previous generation. The good news is the transmission shifts gears both quickly and efficiently and it largely stays out of the way for every day driving.

Where the new Tiguan shines is highway driving. It’s quiet and comfortable and you get the sense that you are in a solid vehicle. It is helped out by a lot of driver aids such as adaptive cruise control, lane keep assist and blind spot monitoring. It glides over bumps and other road imperfections with ease, being sure to coddle the driver to minimize impact.

And if you’re the type that does lots of highway driving, the Tiguan will reward you with relatively good fuel consumption. It is rated at 8.0 L/100 kms on the highway. It has a 10.7 city rating and a combined rating of 9.5. During my week of mixed city/highway driving I was able to return a decent 9.3 L/100 kms. And joy of joys, the Tiguan takes regular gas.

Other forte’s include lots of good tech available including Apple CarPlay and Andoid Auto, a fully digital instrument cluster (only available on the top trims), a banging Fender audio system, adaptive LED headlights, an available 360 surround view camera and all the aforementioned safety systems.

While the great interior quality and available tech is top notch, it will certainly cost you. My tester came to $43,530 excluding freight, PDI and taxes. That’s on the pricier side of the coin when compared to its direct competitors, but if you compare it to other third row SUVs available such as the Nissan Murano, Kia Sorrento or even the Mitsubishi Outlander, you’ll get much more room and much more usable third row seating with similar features for around the same amount of money.

And I suppose that’s why I’m a bit confused on why the current Tiguan easily outsells the previous generation Tiguan – the one I believe to be the better Tiguan. I can’t seem to figure out what it’s trying to be. It no longer has the performance credentials to name it alongside the Mazda CX-5. It is more expensive than a Subaru Forester and much of its other direct competition. If you compare it to other three row SUV’s it comes off as smaller, less versailles and just plain cramped in the third row.

My advice to Volkswagen would be to stop trying to straddle the line. Either make the Tiguan proper compact SUV or make it more competitive with other three row SUVs.

Then again, what the hell do I know, remember? Volkswagen’s still laughing all the way to the bank with this one.