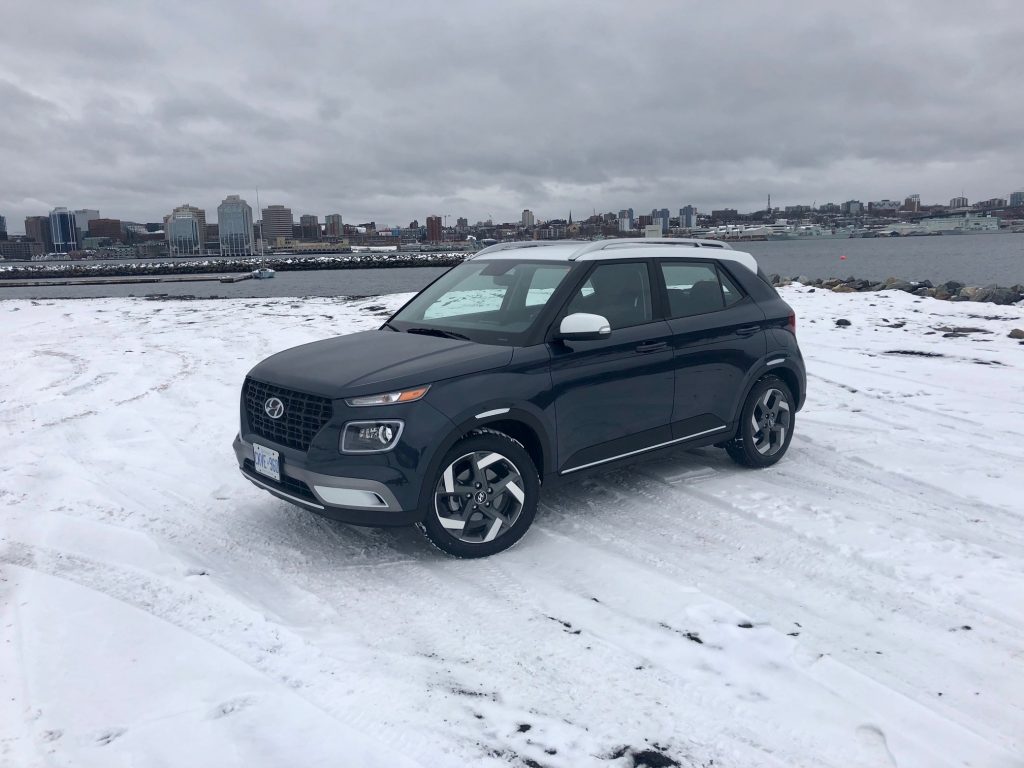 Hyundai’s current lineup includes a fairly substantial 11 models and that doesn’t include the different variants of the same model such as the electrified version of the Kona or the high performance N version of the Veloster. On paper, it seems as if Hyundai is a fairly well-rounded company.

Not so, according to Hyundai. Something was lacking but with the introduction of the all-new Venue, it now considers it to have filled an apparent void in the line-up.

Where exactly was there a hole? The rapidly growing sub-compact SUV segment where a few models have already been playing in for years such as the Mitsubishi RVR, the Ford Ecosport and the Nissan Kicks. The general idea of these adorable utes is to get first time buyers into something that is both roomy and versatile, all while not breaking the bank on initial price and gas.

And as far as adorable goes, Hyundai certainly achieved that with the Venue. It looks like the Santa Fe and the Kona spent a taboo night together and out came the Venue. Aww! One of the things that Hyundai is doing right these days is keeping the general corporate styling present on their SUVs all while giving them individual identities instead of making them all look virtually the same *cough* Mazda *cough.

With that said, most who saw my tester in person were not a fan of the white roof claiming it to be too much of a rip-off from Mini. But overall, the proportions are good and nice looking wheels with an aggressive front end help the Venue seem modern and attractive.

Inside is where the Venue really excels. There is plenty of head-room and while the Venue is on the narrower side, you never end up feeling wanting for more space. Passengers in the back seat will gain the same great headroom with adequate leg room, but the poor soul relegated to the middle seat will likely only tolerate shorter trips.

As far as cargo room goes, the Venue can swallow typical items like a few grocery bags, but if you need to haul lots of stuff that will mean folding the rear seats down. Its 19 cubic feet is on par with the Ecosport’s 20 cubic feet, but the Kicks offers more at 25 cubic feet. One trick the Venue has up its sleeve though is a two-tiered cargo floor for added versatility.

Another forte is the quality of materials. They are by no means Audi-like, but they certainly befit a vehicle at a much higher price point. One thing I love about modern-day Hyundai designs is they mostly are quite user friendly all while looking attractive.

Under the hood you’ll find a 1.6 litre naturally aspirated four cylinder which produces 121 horsepower and 113 pound foot torque mated to either a manual or automatic in the base model, with automatic being standard on the rest of the trim levels. If those numbers sound familiar it’s because they are virtually identical to the Accent, on which the Venue is based. I drove the then redesigned Accent sedan back in 2018 (the sedan version of the Accent has since been discontinued, but the 5-door is still available) and noted that the amount of power it delivered – despite power being down from the last generation – was ‘adequate’. This time around in the Venue, it feels more sluggish. That’s not to say that the Venue is outright slow, but it certainly shows that it is more of an urban roundabout than a star of the Autobahn. The difference in power feel between the Accent and the Venue could be attributed to the fact that the Venue weighs a bit more. There’s four drive modes including a Sport button, but all that really does is delay shift points, it doesn’t necessarily make it any faster.

I did take the Venue on the highway and it can still hold its own. You do need to plan well ahead for passing slower vehicles and lots on engine noise will intrude to the cabin as a result, but it will still get the job done. Highway driving is made easier with blind-spot warning available on all models except for the base models.

Other available safety systems include Hyundai’s Smartsense which comprises of lane keep assist, forward collision avoidance, high beam assist, and driver attention warning. Strangely, you can only get Smartsense on either the top Ultimate trim, or the trim one up from the base called the Preferred trim. If you pony up more money for the Trend trim then you won’t get these features, according to Hyundai’s website. Very odd packaging of trim levels.

That said, synonymous with the Hyundai name is value, and you certainly get it in the Venue. Standard on all trim levels are heated front seats and mirrors, rearview camera, keyless entry, air conditioning, a 7.8 inch infotainment screen and Apple CarPlay and Android Auto.

Venues equipped with the automatic transmission will get official fuel consumption ratings of 8.0 L/100 kms city and 7.0 highway. During my week with it, I returned 7.1 L/100 kms in mixed city highway driving which is indeed impressive.

But here’s the thing that’s bugging me about the Venue. As impressive as it is when matched against its competitors, its worth takes a bit of a dive for me when compared to its own family. The 5-door Accent, for instance, feels more powerful thanks to weighing less, it has more cargo room, it feels more nimble in the corners and it costs less. You get the same engine and depending on trim, the same Hyundai value. Since the Venue comes in front-wheel drive only, what exactly is the advantage to taking it over the Accent?

That’s the only real part I’m struggling with. But if you take the Accent out of the mix, you’ll find a cleverly packaged, attractive and well valued vehicle worthy of a spot on your car shopping list.

-Strange Smartsense packaging
-Sluggish off the line
-Anything you can do I can do better, says the Accent
-No AWD available