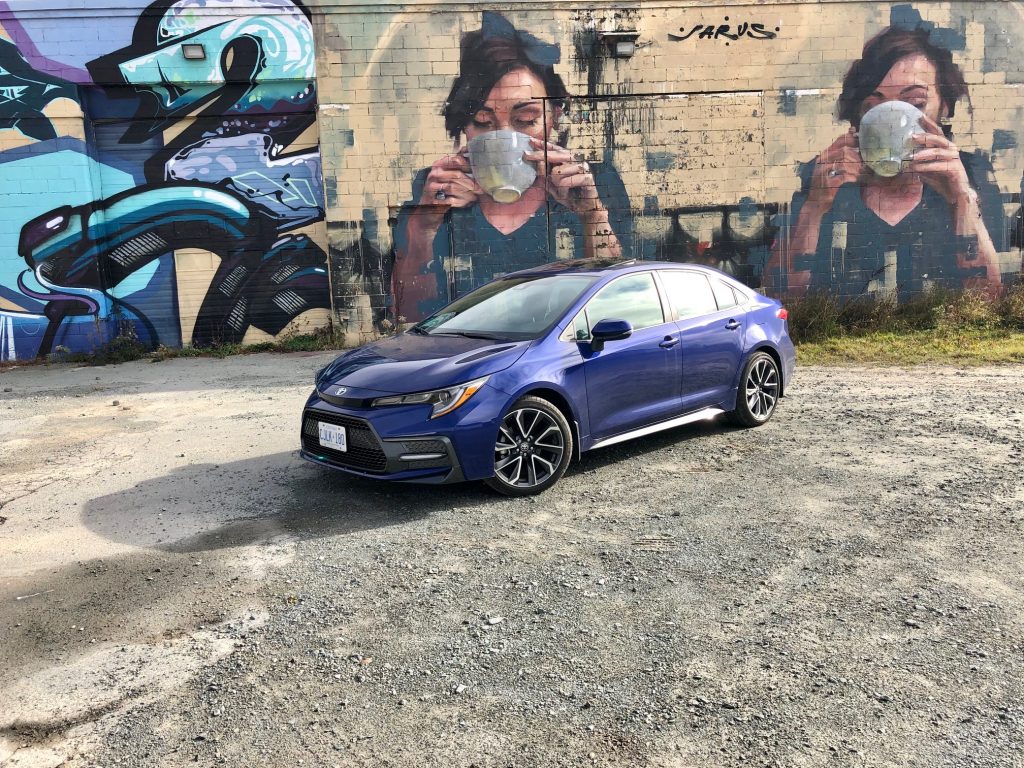 For decades we’ve been touting the Corolla as being an excellent choice for a student or your grandma because as a car by definition only, it certainly does the trick. The Corolla has always excelled at delivering peace of mind through excellent reliability, safety and resale not to mention its willingness to sip rather than chug fuel. That’s all grandma wants, and so that’s all grandma gets. No other vehicle ticks off those mundane boxes quite like the Corolla.

But the Corolla could never be described as interesting. It was a kitchen appliance. A toaster. A refrigerator. When was the last time your blender evoked any sort of emotion out of you?

The challenge for Toyota has always been to find that delicate balance of elevating the Corolla into something more interesting while simultaneously retaining the loyal fanbase of customers who don’t give two hoots about driving.

I thought they had definitely achieved something interesting with the introduction of the Corolla hatchback, which I drove last summer, and came away fairly impressed with. I thought that the hatchback would satisfy those of us who want something more than a simple appliance and the sedan would carry on keeping grandmas everywhere happy.

Toyota Canada was kind enough to lend me the heavily updated sedan for a week, and joy of joys, they sent one equipped with a manual transmission. Already a good start.

And visually, the sedan hits the nail on the head too. Taking cues from its hatchback sibling, the sedan now dons the same aggressive front end styling. My tester was the SE model and featured the upgrade package which nets it those rather nice looking 18-inch alloy wheels along with a power sunroof among other things. Around back, it gains more interesting features like a honeycomb pattern below the bumper, dual exhaust, lip spoiler and even a rear diffuser. One thing of note is that the Corolla comes standard with all LED lighting in hatchback form, but for some reason Toyota decided to give the sedan all LED lighting save for the rear turn signals and reverse lights. Why not make it all LED like the hatch? And by the way, the Corolla is no longer offered in beige. Sorry, Grandma.

Inside it takes on a bit more of an understated look, while still looking fairly modern and attractive. Quality of materials is on par for a Toyota product, and the layout is generally intuitive.

As seems to be the trend with most modern day Toyotas, the infotainment system sits fairly high atop the dash, presumably so the driver won’t need to take their eyes too far off the road to look at the screen, but I found its height to be a bit distracting while driving. SE and XSE models get an eight-inch screen. It is compatible with Apple CarPlay, but still no Android Auto. The system itself is easy to comprehend, though I found it to be a bit laggy to respond to commands at times.

Other notable features include automatic climate control, Bluetooth, a back up camera, wireless phone charging, a heated steering wheel and six-speakers. The Corolla in SE with the upgrade package comes with mostly everything you might want.

While the Corolla is bigger than the previous generation it still has competitors that offer way more interior space such as the Honda Civic and the Nissan Sentra. Still, most will fit comfortably up front while rear seat room remains adequate. Trunk space is amongst the smallest in the segment on paper, but in person the space appears vast. The rear seats can fold for added versatility.

Versatility this, interior room that, blah blah blah. So far this is sounding like a typical Corolla. However, under the hood are two engine options: a 1.8 litre four cylinder and a 2.0 litre. My tester came equipped with the latter and it produces 169 horsepower and 151 pound foot torque. Those aren’t the type of numbers that give you goosebumps, but when equipped with the manual transmission you can have yourself a decent amount of fun. When driving normally the Corolla behaves as you’d expect, but give it a little push and it responds surprisingly well. Since this engine is naturally aspirated, you don’t get the slingshot-like pull that a turbo provides, but it still provides adequate power when needed; something I’ve never once said about any Corolla before it. Peak power comes in near 5,000 RPM which is exactly what you want for spirited driving on twisty roads. The manual is easy to use, though shifts are quite long.

And when it comes to the suspension, it is compliant and comfortable when needed, but when you’d like to have a little but of fun, the suspension is happy to oblige to a point. It’s no BMW M3, but it allows enough surefootedness for you to have a good time. With this suspension it seems like Toyota has found the sweet spot to satisfy (albeit not completely) spirited driving and grandmas alike. The only gripe grandmas might have is seat comfort. I found it difficult to find an optimal seating position and even when I did, driving long distances wasn’t Lexus-like.

But as long as you remind yourself that you’re still driving a Corolla, then performance-wise, it impresses far more than you would think. Think of it like a kitchen appliance that also allows you to play video games on it once in a while.

That said, it wouldn’t be a Corolla review if we didn’t talk safety and fuel efficiency. The former is covered by Toyota’s standard Safety Sense 2.0 which includes dynamic radar cruise control, pre-collision warning with pedestrian and bicycle detection, lane departure warning and automatic high beams. Safety isn’t a sexy topic but it’s one I think more buyers should be paying attention to. Toyota’s commitment to have most – if not all of these features standard on every single model needs to be commended.

As far as fuel consumption goes, the Corolla is officially rated at 8.4 L/100 kms city and 6.5 city when equipped with the 2.0 litre engine and six-speed manual. My mixed highway driving for a week delivered 7.3 L/100 kms. So, as expected, the Corolla still delivers on this front. It should be mentioned that if fuel efficiency is your top priority, Toyota now offers a hybrid version of the Corolla for 2020, which is where you’ll want to look first.

And indeed it delivers on a lot of other fronts too – most not typical of any Corolla before this current generation. It now hasinteresting styling, an interesting engine/suspension set up, a six-speed manual is still available and you won’t need to remortgage your house to afford it. It also still offers all the things that keeps grandma happy such as good safety, reliability and fuel efficiency.

Basically, Toyota has found a way to satisfy most of the different types of drivers out there, regardless of their priorities. In and this landscape, that is fairly hard to pull off.

-Adequate power, but could use a turbo
-Seats difficult to get in optimal position
-Infotainment placement and responsiveness
– Still no Android Auto