Highlights from the big show today. Thanks again to Steve Betts who provided insight and analysis on the World Baseball Classic last week in TO.Thanks to Halifax Mooseheads insider Chris Trembley, Dalhouse Tigers Bball Coach John Campbell, and thanks again to Dan Reed, the voice of Tigers bball, for his excellent q and a regarding the Raptors. Below are the highlights from each conversation with today’s guests, enjoy!

Steve Betts• Canada didn’t show up to the field vs Italy. Italy not as bad as everyone thought would be, some solid players at the top of the lineup.• Pitching definitely hurt Canada. One of their starting pitchers threw a fastball in the low eighties! • Justin Morneau and Matt Stairs had a very disappointing tournament.• Canada’s heart was in it but just no hitting from the 5 spot on, and the pitching made up of guys who play Single A and Double AA, just wasn’t enough to compete.• By far Venezuela had the most energetic fans.• Steve picks the Tampa Bay Rays will win the AL East, followed by the Yankees and Boston in that order. Does not think Toronto will be a factor. The division could come down to the effectiveness of the closers on each team, Mariano Rivera is starting to show his age.• Tampa Bay has a winning formula, Yanks made great additions with Burnett, Sabathia, and Texeira. . Sox did not do enough over the off season to add to their roster. • Arod’s acceptance from Yankee fans will basically come down to how productive he is throughout the season.• Steve thinks the Phillies are still the team to beat in the NL. Believes the Cubs will be the hard luck kids again this year. • Steve picks Japan to win the WBC, citing too much pitching and speed. 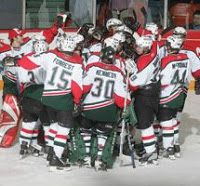 Chris Trembley• Mooseheads were snake bitten in their late season charge to make the playoffs. In their pivotal game at PEI on Wed. they outplayed the Rocket but just could not put enough pucks in the net. • Mooseheads were worried early in the season that it could be a non playoff season, team realized they were without any great players outside of Logan Macmillan.• Mooseheads were never really overmatched they just lost allot of close games.• The Mooseheads did not get much out of their goaltenders this year. Mark Gettman did not perform as well as he should have between the pipes and there were not enough goals scored to make up the difference.• General Managers announcing they want to bring an end to “staged”” f

ighting in the NHL is just an attempt to silence the media. Fighting is an integral part of the game and you can’t just change the fabric of a game overnight.• The linesmen don’t get in and break up fights like they used to because the dynamics of hockey fighting has changed over the years.

John Campbell• Referring to the Tiger’s first round loss to UBC, Coach Campbell said UBC came out very focused on defence, locked down Simon Farine, other players did not step up, and some early defensive lapses by the Tigers killed them, “They really outplayed us from a technical standpoint and an effort standpoint”.• Recruiting will focus on finding physical inside players, felt the team did not have enough of a physical presence in the post at times throughout the season.• Wants to get the Tigers to the point where they are the top team heading into AUS playoffs, and wants to compete for a national championship, not just participate.• Teams at the national tournament had allot of inside strength, whereas teams in the AUS this past year were very guard oriented.• Regarding their consolation round game vs Concordia, the Stingers felt very slighted by the seeding they received (7th) as the Quebec champs and a team that had been ranked highly all season. Came out with something to prove vs Tigers. Tigers had too many turnovers in first half and could not get any scoring outside of Simon Farine.• Coach feels he needs to get a guy in recruiting who is 6’5’/6’6”, can play inside/outside, is a physical presence and can bring some grit.• Dave Nutbrown, the former Head Coach at Acadia, brought allot of technical defensive instruction to the Tigers and was the primary reason the Tigers were the best defensive team in the conference. Nutbrown has also been a big help with the post players.• Josh Beattie has a tremendous work ethic and is a natural shooter. • Carleton has players on the bench who could start for many Canadian teams and Carleton will be back next year and competing for a national championship even with the loss of valuable senior players.
Dan Reed• UBC had too much depth for the Tigers to deal with. AUS teams are not quite good enough at this point to compete nationally.• Regards to the question whether or not the Raps should have kept TJ Ford, Dan said the Raptors should have never given up Charles Villeneuve for TJ Ford. Villenueva could have been a very valuable player for the Raptors.• Raptors have put together a bad team, made so many bad choices including Andrea Bargnani over Brandon Roy in the draft, and selecting Joey Graham over Danny Granger.• Calderon kills the Raptors defensively. Calderon is a good point guard, but the 2 and 3 positions have to be stronger to make up for his weaknesses. However, he’d rather have Calderon than TJ Ford.• Andreas Barganani will never be an impact player like Dirk Nowitski, but could settle in eventually as a Mehmet Okur type.• Raptors have always been a soft team. Chris Bosh crumples with contact. Loves Chris Bosh, but you have to trade him and get value, and rebuild the team.• The Brian Colangelo method of building a team has failed. They need some hustle players and guys who can rebound. Teams like the Bobcats and Grizzlies have brighter futures than the Raptors. • Sam Mitchell was a bad coach. The only thing that saved his job was the Coach of the Year award. Wishes they would have fired Sam prior to the season and gone after Mike Dantoni.• Colangelo will be back because he is a proven front office guy and a history of success. He’s made some mistakes, but he’ll fix them and start over. Jay Triano will not be back next ye

ar• “The Raptors have proven to be inept in any kind of strategy.”• Marc Ivaroni, the fired coach of Memphis, is available and would be an excellent head coach for the Raptors, as he has a history with Brian Colangelo and is a disciple of Mike Dantoni.• Anthony Parker has lost athleticism and explosiveness, cannot get separation from his defender and is no longer a legitimate NBA player.• Shawn Marion is no longer the matrix, he’s an enigma. Likes him more than Jermaine O’neal. If you can resign him for a low contract then do it but you cannot give him too much money.