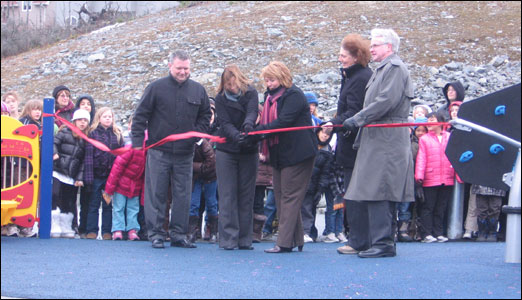 The ribbon cutting ceremony for the new playground at Bedford South School took place this morning under frigid temperatures.

Students from grades primary to six formed a circle around the playground, as Home and School Association president Robert Wooden thanked  Lori Shea and Jacalyn Leeco, parents of Bedford South School students, for their initiative and hard work.

Without the hard work of these two mothers students today would not be enjoying such “cool” structures.

Wooden also thanked the many sponsors, as well as parents and other members of the community. 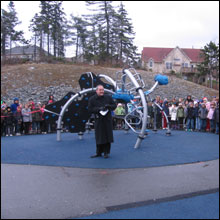 Home and School Association President Robert Wooden gives thanks to all those that have supported the new playground.

After the ribbon cutting the students sang Paint the Town December, before rushing off to play on the popular playground.

Discussions for a new playground at Bedford South School began in the spring of 2008. A committee was formed, with Lori Shea and Jacalyn Leeco as co-chairs, and members of the Home and School Association. Other interested parents also joined the committee and others stepped in to fill out grants and other requests.

The playground committee’s first official meeting was with Bedford Councillor Tim Outhit, who supported the group right from the beginning.

The committee began the official process last September 2008 with HRM, as they assigned a park planner. Once the planner was assigned the committee met with Nova Scotia Health Promotion and Protection to find out about the process of applying for the large provincial grant, to hopefully secure enough funds for the project.

The playground committee initially set out to raise $100,000, with the interest in having a playground with 100% rubber turf.

The committee set out to apply for many other grants and was excited to receive the health promotion grant, as well as funds from HRM, a Cobequid grant,  and money from Councillor Tim Outhit.

The rest came as donations from within the Bedford business and community. The group also had the support of the school and community as they raised additional funds through ticket sales from West Jet. The airline generously donated two tickets to anywhere that WestJet flies.

The playground committee and all members of Bedford South School (including staff, students and parents) couldn’t be more pleased. They began the playground Project in the fall of 2008 and thanks to everyone’s hard work and funds raised the playground equipment and turf was completed by November 2009.

The equipment is unique in that it is from Jambette , a company based out of Quebec. As far as the committee knows, Bedford South School is the first in Nova Scotia to use Jambette equipment.

The most popular piece is called the Xyra 1, which has several spinners attached to it. This piece of equipment is very rarely without spinning children of all ages.

With the mild weather the students have been enjoying themselves during school hours as well as after school and weekends. Other members of the community are also enjoying the new space.

The ribbon cutting will take place on Wednesday, December 16 at 10 a.m., at the front playground. A small reception will follow in the library.

The sponsors will be presented with a school Christmas ornament and a plaque, to be hung in the school.