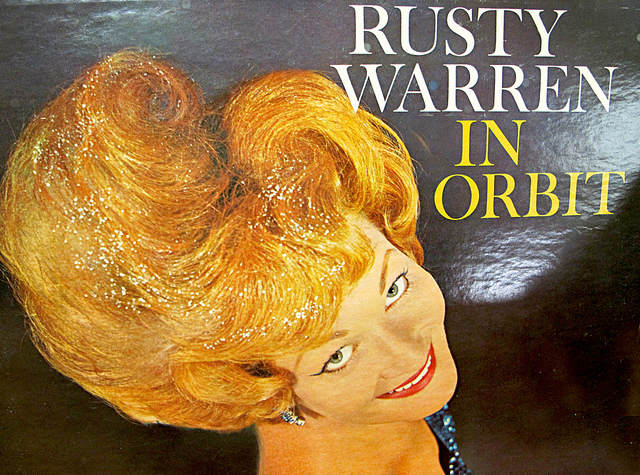 I spotted this album in a small thrift store the other day. I was fascinated by the hairdo and snow or maybe glitter sprinkled on it. Had to take a picture to show you. Well, one thing led to another and when I got home, I looked up Rusty Warren.
Who knew? Taken directly from Wikipedia…

Known as the Knockers Up Gal, she has frequently been called the mother of the sexual revolution. Her career began in the early 1950s in Phoenix, Arizona. Later she moved her act to Las Vegas, Nevada. Her comedy routines exposed the subject of sex from a female perspective. Her most famous contribution to the sexual revolution was the song “Knockers Up” from the 1960 album of the same name. The women in the audience were encouraged to stand up and march through the room with “their knockers held high.” This was followed by the song “Bounce Your Boobies” in which Warren encouraged women to relieve themselves of their bras.

Her material was considered very advanced for its day and considered extremely raunchy. Her albums were tucked away by many parents so their children could not listen to them. She was the first comedian to openly discuss sex at a time when sex was just not discussed publicly. She lost popularity as the sexual revolution of the late ’60s started to take hold and the topic was no longer taboo.

I found “Knockers Up on Youtube, if you want to have a listen. So silly, but very racy for the times!