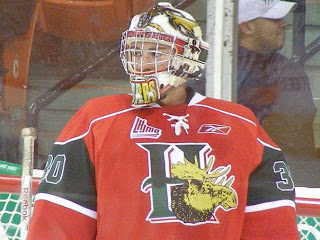 Different Game, Same Result for Mooseheads
Lack of discipline hurts Moose once again
A sense of Déjà Vu must be creeping up on the Halifax Moosehead players and their Coach/GM Cam Russell. Another loss and another hockey game filled with a lack of discipline that saw them spend much of their night in the penalty box.
The Mooseheads ruined a solid 32 save effort by goalie Mathieu Corbeil and dropped Sunday’s contest 4 – 1 to the Cape Breton Screaming Eagles.
Halifax got off to a quick start when Captain Tomas Knotek, continuing his rich vein of form, snapped a bullet shot past goaltender Olivier Roy early in the first and the Moose held the lead going into the second period.
However, unlike the game in Sydney on Friday evening, there was no three goal lead in the books as Cape Breton answered right back in the second period, as Luke Adam scored his 42nd of the season to tie the game and then a few minutes later added his 43rd to put the provincial rivals up 2 – 1.
Cape Breton wasn’t done yet as Maxime Legault broke out on the powerplay and froze Corbeil with a snapshot to the top corner to make the game 3 – 1 and out of reach for the Halifax Mooseheads.
Much of the game had the young Herd chasing Cape Breton around the ice and between halfway point of the second period to the halfway point of the third period the Mooseheads did not have a single shot on net.
The Mooseheads gave up seven powerplay opportunities and it was due to stellar play by Corbeil that the Screaming Eagles were able to convert on just one of their chances.
Late in the third with his team down by two goals, Cam Russell pulled Corbeil and called a time out to settle the troops and draw up a play. The Mooseheads promptly lost the face off in the offensive zone and Cape Breton broke out on a three on one to score an empty net goal to end the game. It was another example of a lack of intensity late in games that has cost the Mooseheads more than a few points this season.
Announced attendance was 7,772, as the Mooseheads hosted Scout Day in Moose Country.
Three Stars
3rd – Mathieu Corbeil – The Mooseheads backstop made 32 saves and kept the Moose from being blown out early on
2nd – Maxime Legault –The Cape Breton winger had a beautiful goal and two assists on the night
1st – Luke Adam – The Canadian World Junior forward had two goals and was unlucky to not pickup a hat-trick, he also added an assist to finish +3
Henry Whitfield is an avid hockey enthusiast who covers all angles of the Halifax Mooseheads. Follow him on Twitter @HenryWhitfield for live game updates.