So, on Sunday we took the special express bus to the beach for the Sand Sculture contest. The beach by itself is already fun enough for Squirt, so she was excited.

Getting there wasn’t as easy as I thought, as people parked on both sides of the road and we were on a big bus, it took twice as long to get all the way in. I was still happy that we could take the bus, as with the car, we would have had to park all the way out and walk, carrying out beach tote and food, etc.

It was a nice day, the sun was in and out behind the clouds a bit, so it wasn’t too hot. Here’re some pics that we took at the sculptures. Enjoy! Oh, and stay till the end for some “model” pics, lol. 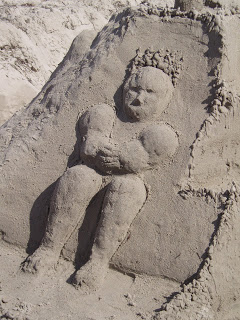 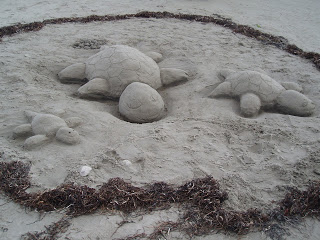 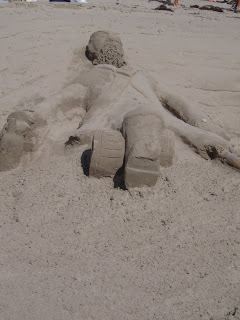 Later in the afternoon when the tide came in, the sculptures looked miserable, except for the 2 below. You’ll see why. 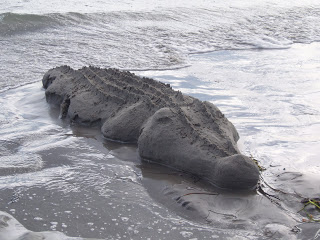 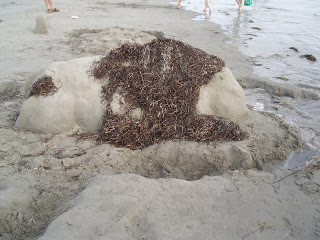 That crocodile on the left looked so real in the wather, didn’t it? On the right is the sea lion, probably is thinking whether it should jump in the water or not lol.

Around 5:30, people started to pack up and leave. Our bus was expected to be late returning (because of all the parked cars), so we had a bit of time to spend. Squirt and I decided to walk along the shore, bare foot. The fine sand felt so good on the bottom of our feet, I could walk for hours.

Near the end of the beach, there were some rocks laying on the water which became a stage for Squirt to play around. And she likes to be goofy to the camera, so I’m showing her off here 🙂 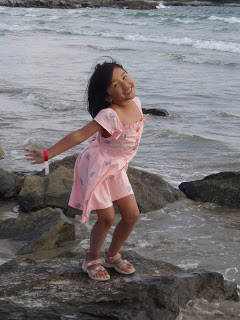 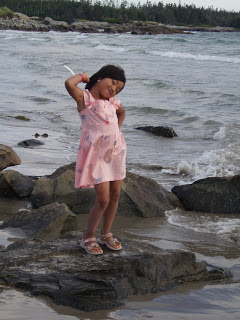