Let’s clear this up right now:  my definition of “sandwich” is probably broader than yours.  If the item in question is using bread to hold together a wonderful package of ingredients – it’s a sandwich.

This is not the legal definition. Apparently a Boston court ruled that a sandwich must legally involve at least two slices of bread.  The UK and Australia go even further by limiting a sandwich to slices from a loaf, thereby disqualifying hamburgers and subs. This is all lazy Wikipedia research from articles with the words “dubious” and “citation needed” – and no mention of Canada. So whatevs, I can do what I want.  A wrap is a sandwich because I’m not doing a secondary series called “Wrap Showcase” – that’s dumb.

As for the gyro (pronounced yee-ro), it is the Greek version of the Turkish döner kebab. The Halifax donair was an adaptation of the gyro to suite local tastes in the 70′s, which sort of makes it a grandchild of the döner kebab. The parent of the donair was likely the American gyro, which was the style brought to Chicago around 1965.  They both involve a loaf of spicy ground meat, but the gyro comes nestled in a Greek pita with tzatziki sauce, tomatoes and lettuce.

A Greek gyro is similarly built, but uses rotisserie meat and French fries as opposed to the spinning loaf. This is the entity that Island Greek takes credit for introducing to Atlantic Canada. 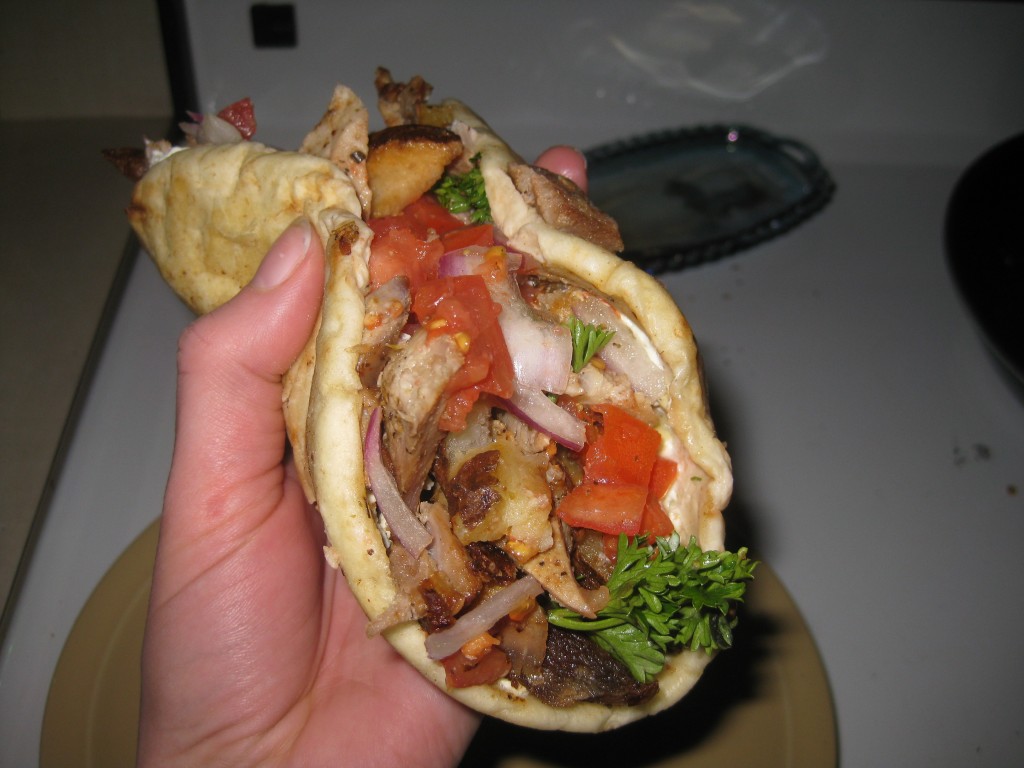 The Traditional Greek Gyro at Island Greek is “seasoned roasted pork thinly sliced on top of a traditional thick style Greek pita, layered with home made tzatziki, sliced tomatoes, sliced red onion, topped with home fries”. The pita is made with their own fresh dough. The tzatziki is delicious. These two components really make this sandwich work. I found the pork to be a little dry but that is my only complaint. Well, that and I wish it was lamb. A friend of mine ordered a chicken tzatziki wrap that could make you moan. I’m thinking that Island Greek might be one of those under-rated restaurants in Halifax… it’s soon time to try the pizza.