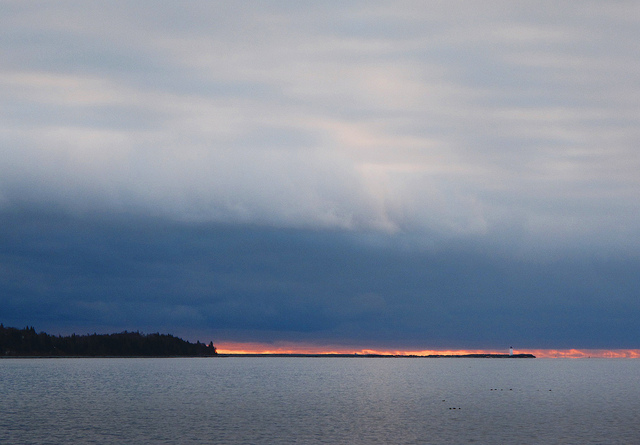 Today’s sunrise from the market.
What you are looking at off in the distance is called Hangman’s Beach (originally called Maughers Beach) jutting out from McNab’s Island in the Halifax harbour. You can see the tiny lighthouse at the end of the spit. The beach has a gruesome if not interesting history.

This was taken from a pirate fact sheet …our local museum put together
Around the 18th Century, law required that the pirates be executed with their bodies displayed in public as a warning to other sailors. The body was covered in tar and hanged from chains in an iron cage called a gibbet. The Royal Navy used the same treatment on mutineers. Two pirates were hanged this way on George’s Island in 1785. Another, Jordan the pirate, was hanged at Point Pleasant Park, near the Black Rock beach in 1809. At the same time, the Navy hanged six mutineers at Hangman’s Beach on McNab’s Island, just across the Harbour. Any ship entering Halifax Harbour in 1809 had to pass between hanging and rotting corpses.

The lighthouse you can barely see also has an interesting story.
The light at Maughers Beach ( Hangmans Beach) was used in 1851 by Abraham Gesner to test out the new fuel he had invented, kerosene, to replace whale oil. Although lighthouse officials were skeptical, the careful recording of the efficiency of kerosene by Maughers Beach keeper David George helped establish the fuel for standard use.

And in other totally unrelated vein , the winner of the olive oil and balsamic vinegar is Sara Harley of Dream Big! #15 drawn by the number generator at random.org. Congratulations:)

So I’m back at the market tomorrow. I wonder what adventures await!