The Following Notice was posted on Schwalb’s Window: 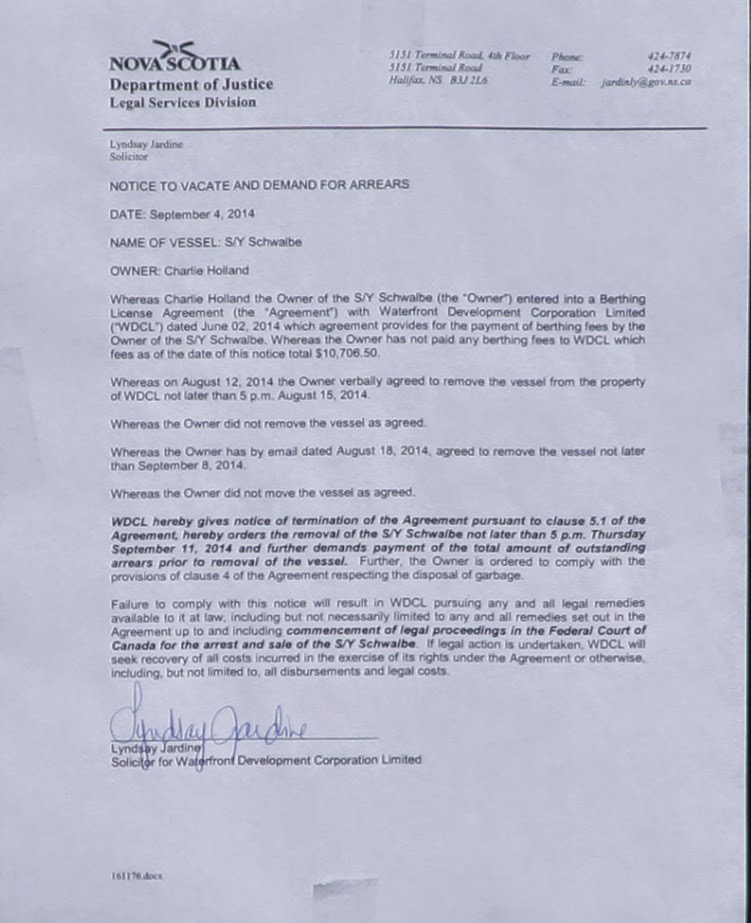 You can read our initial story Here:http://blog.halifaxshippingnews.ca/2014/06/schwalbe-from-southampton.html. The Schwalbe departed Bahamas bound for Bermuda, and with contrary winds and following seas, found themselves equidistant between Halifax and Bermuda.

As they were heading in the general UK direction they chose Halifax.

CBC has reported that there are also some imigration issues – The owners wife was deported to the Philippines – As a Brit, he is allowed to stay for 6 months but has been told by CBSA not to leave Halifax.

UPDATE:
Apparently the CBC Story was incorrect. From Charles Holland Himself:

my partner of 10 years, who has circumnavigated on S/Y Schwalbe was asked by CBSA (Canadian Border Services) to leave the country in order to fulfill immigration obligations in the process of her visa to visit Canada. It is my understanding that Somporn Chiangmanee has not been deported as falsely stated by CBC news.

CBSA took exception to the temerity of my partner, Somporn Chiangmanee, arriving in Canada without a visa in place. Despite Somporn being in possession of 2 expired and 1 current passport documenting her arrival worldwide aboard S/Y Schwalbe, they failed to recognize her as valid crew. Regardless of our immigration Lawyer Mr. Lee Cohen advising us of her entitlement to remain in Canada under a temporary residence permit, CBSA were adamant that she must return to her country in order to meet visa requirements.