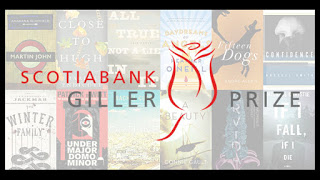 The Giller Prize was founded in 1994 by Jack Rabinovitch in honour of his late wife, literary journalist Doris Giller, who passed away from cancer the year before.

The award recognized excellence in Canadian fiction – long format or short stories – and endowed a cash prize annually of $25,000.00, the largest purse for literature in the country.
Daydreams of Angels by Heather O’Neill

“Heather O’Neill’s distinctive style and voice fill these charming, sometimes dark, always beguiling stories. Heather O’Neill’s unforgettable novels, The Girl Who Was Saturday Night and Lullabies for Little Criminals, captured readers with their disarming characters and irreverent descriptions of life on Montreal’s St Laurent Boulevard. Here, O’Neill’s voice takes flight in a collection of original stories that evoke sorrow, laughter, and heartbreak. From the title story of a naive cult follower in “Dear Piglet” to the struggle of two young women in occupied Paris in “Snow-White and Rose-Red” to the story of generations of failed Nureyev clones in post-Soviet Russia in “The Ugly Ducklings”, these stories surprise and delight at every page, showing once again that Heather O’Neill is a remarkable talent and among our best, most inventive writers.” publisher

“A contemporary take on the apologue offers an utterly compelling and affecting look at the beauty and perils of human consciousness. By turns meditative and devastating, charming and strange, Fifteen Dogs shows you can teach an old genre new tricks.” publisher

“Martin John?s mam says that she is glad he is done with it. But is Martin John done with it? He says he wants it to stop, his mother wants it to stop, we all want it to stop. But is it really what Martin John wants? He had it in his mind to do it and he did it. Harm was done when he did it. Harm would continue to be done. Who will stop Martin John? Will you stop him? Should she stop him? From Anakana Schofield, the brilliant author of the bestselling Malarky, comes a darkly comic novel circuiting through the mind, motivations and preoccupations of a character many women have experienced but few have understood quite so well. The result confirms Schofield as one of the bravest and most innovative authors at work in English today.” publisher

” With its stories of innocent young girls and wild beasts, attempted murder and ritual mutilation, haunted houses and road trips to nowhere, Samuel Archibald?s Arvida, the portrait of a remote mining town in French Canada, reads like a Proust-obsessed Cormac McCarthy. A 25,000-copy Bestseller in French, it does for northern Quebec what Faulkner did for the south. Samuel Archibald’s debut collection of short fiction, Arvida (Éditions Le Quartanier, 2011), won Quebec’s Prix Des Libraries 2012 and Prix Coup de Coeur Renaud-Bray 2012.” publisher

“Outline is a novel in ten conversations. Spare and lucid, it follows a novelist teaching a course in creative writing during an oppressively hot summer in Athens. She leads her students in storytelling exercises. She meets other visiting writers for dinner. She goes swimming with an elderly Greek bachelor. The people she encounters speak, volubly, about themselves: their fantasies, anxieties, pet theories, regrets and longings. And through these disclosures, a portrait of the narrator is drawn by contrast, a portrait of a woman learning to face a great loss. Outline is Rachel Cusk’s finest work yet, and one of the most startling, brilliant and original novels of recent years.”