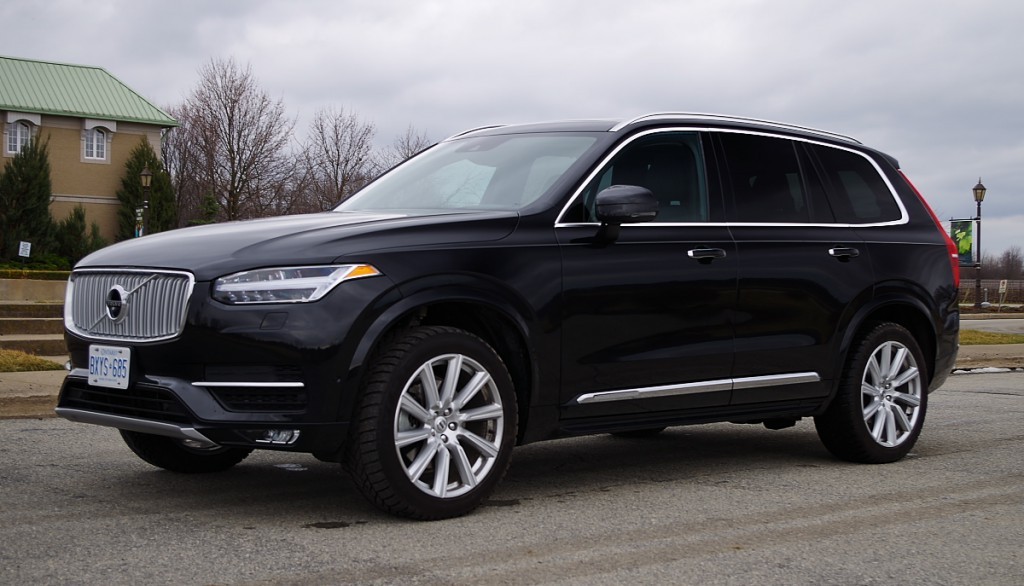 (To read Cardriven.ca’s initial review of the XC90, click here)

It wasn’t until 14,000 years ago that the dense glacial icecap that once covered Sweden began to retreat. It is believed that 12,000 years later the first hunters entered the area following the migration paths of their quarry into the emerging landscape. Coincidentally it was about this time that Volvo last remodeled the XC90 CUV. Actually it has been 12 years, which in automotive evolutionary terms is a glacial pace. The company decided that 2016 was the year to introduce an all new XC90. After so much time how would the world react?

Well for the most part we have been very impressed. The new XC90 beat out both the Mercedes GLE and Lincoln MKX to take the AJAC Best New CUV Over $60,000 Award for the 2016 model year. The new style is definitively Swedish; it even includes a nod to the Norse god of thunder with LED daytime running lights in the shape of Thor’s Hammer. I was given the chance to pilot the XC90 Inscription T6 and immediately I saw why there was so much fuss over this CUV, a category of vehicle that is usually dull and utilitarian, the XC90 is a looker. 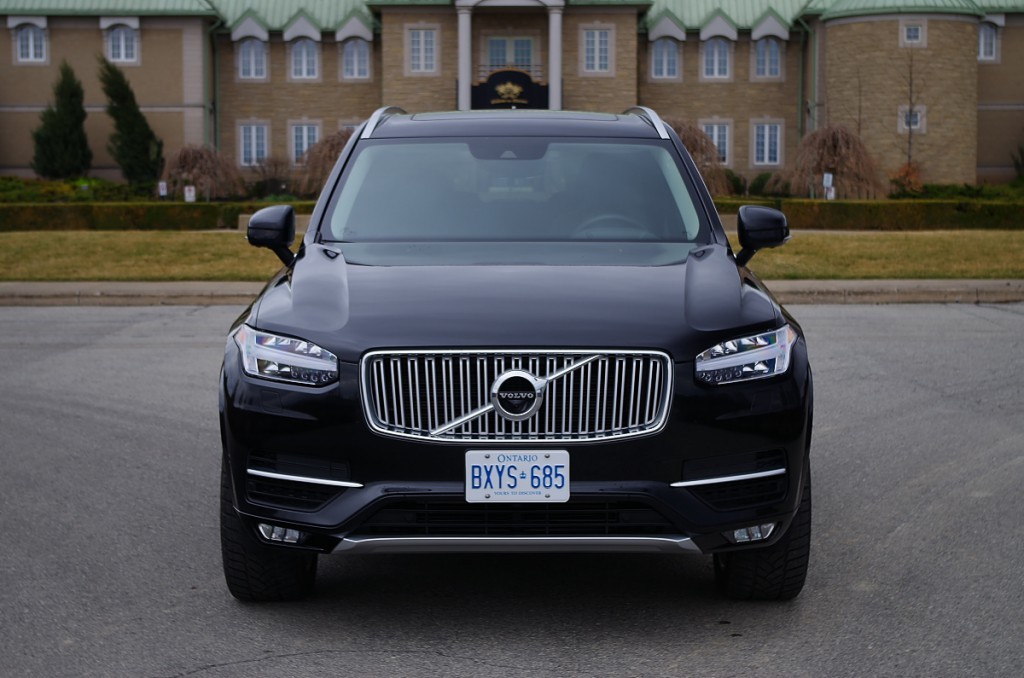 The exterior design is subtle, yet regal. It has a quiet dignity about it that draws glancing looks from other motorists. The attractive sheet metal rests aloft what Volvo has termed its Scalable Product Architecture. Put simply the platform has been developed in a way that will allow it to act as the starting point for numerous future vehicles of all dimensions, not unlike the VW MQB modular platform. Volvo claims this new architecture will allow them to install electric drive componentry without encroaching on the interior space for passengers or cargo, which is something other brands have thus far been unable to accomplish.

Compared to the aged model it replaces the latest XC90 has made some gains in terms of size. The overall length has increased by140 mm to 4,948 mm the wheelbase has been stretched to 2,984.5 mm an elongation of 124.5 mm. This has translated into a usable third row with enough legroom for an actual human. With the rear seats folded away there is ample cargo room, but with both rows stored you gain access to 2,435L of cargo room. 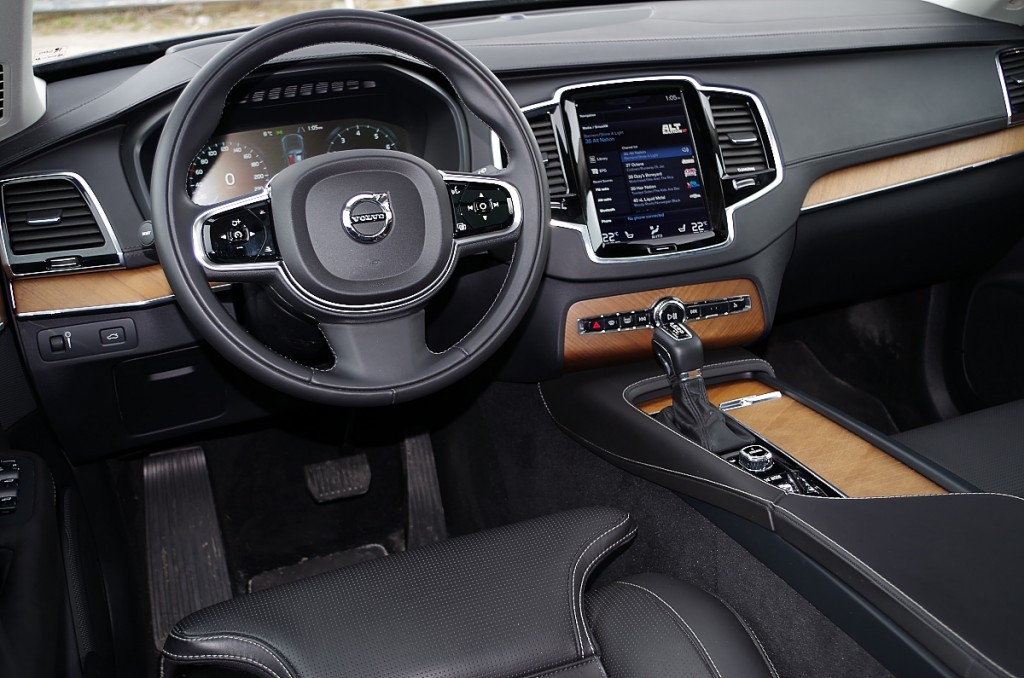 Looking inside you find a simple stylish cabin with clean lines and all of the elegance you would expect in a car costing over $60K. In addition to the minimalist perfection there is some of the nicest trim and materials ever used. It is in the details that the lavishness becomes apparent. To start with the knob which starts and stops the engine, the volume control and the roller that switches between driving modes have been knurled with a diamond pattern. Then there is the crystal glass gear lever crafted by Orrefors a famous Swedish glass maker. These pieces do not just look good they feel solid and very well built. I looked everywhere and could not find a single component that had been assembled using the Ikea wrench. The real wood trim in the test vehicle had not been ruined with layer after layer of lacquer to make it glossy; rather it had a stunningly simple natural look devoid of any fake sheen. I could almost feel the grain of the wood as I gently drew my fingers across it. 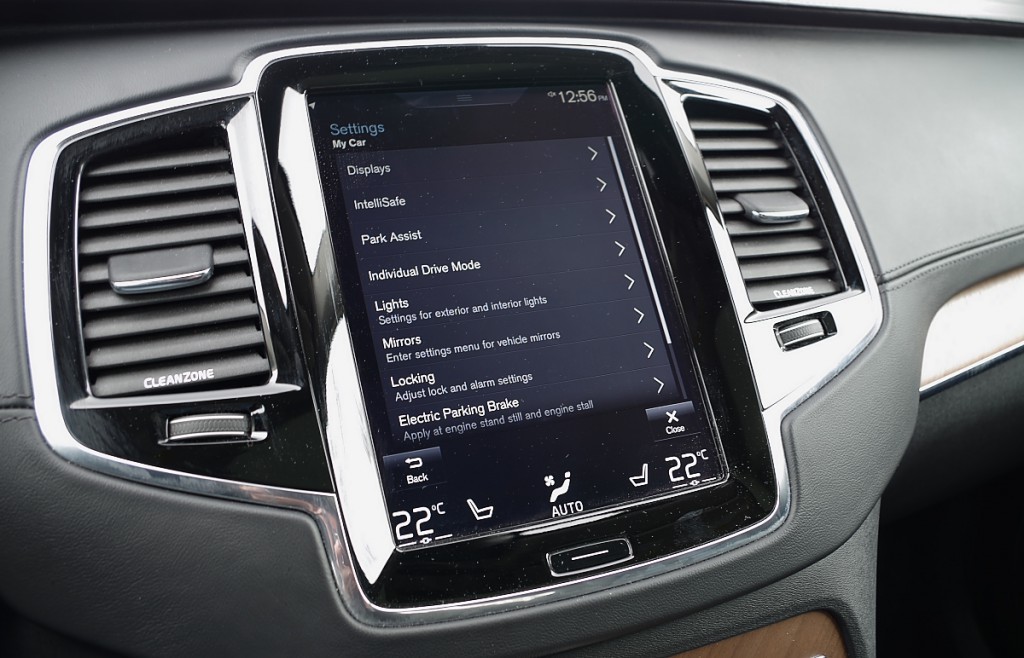 The seats are incredible and very thin. Just looking at them you wouldn’t imagine they could be so comfortable, but they support you in all the right ways and one could drive countless hours without any sort of fatigue or posterior numbness. They are of course covered in high quality leather; they can be heated, ventilated and adjusted in numerous ways. The lean sculptured design has provided extra interior space and the flexibility of the middle row having three individually foldable and slide-able seats makes this a very user friendly and versatile transport. The third row seats have been placed toward the center of the cabin to give a better view forward to those who are banished to the rear; when not in use these powered operated seats will fold flat to make loading cargo much easier. 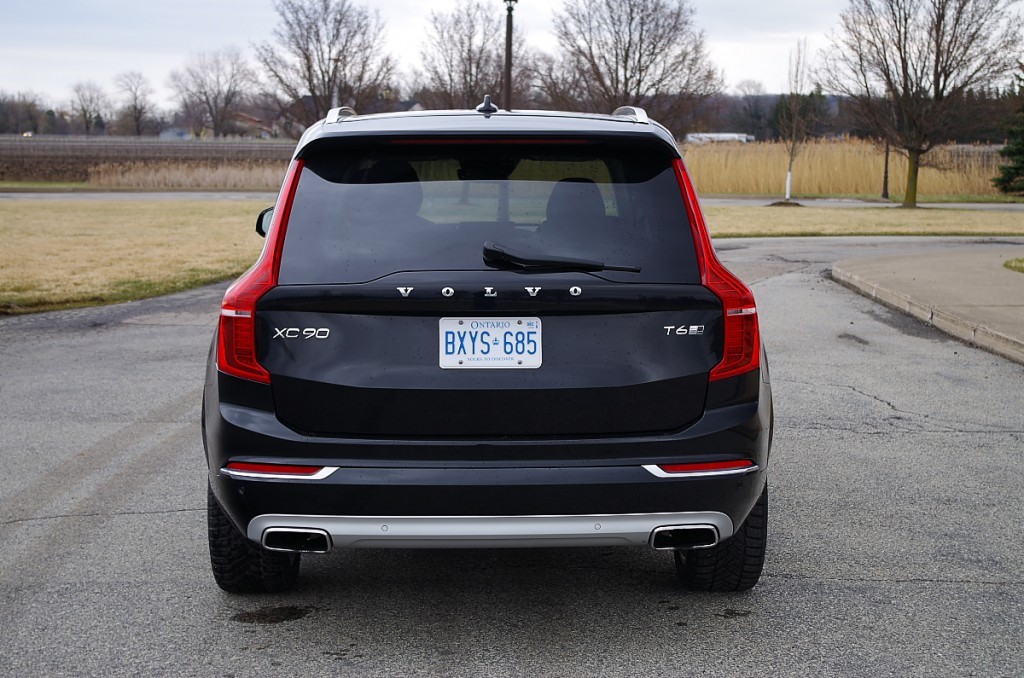 Perhaps the most revolutionary change comes by way of the large tablet built into the center of the dash. This device controls just about everything in the CUV. The interface has been designed to allow the operator to access every major system from any screen. For instance you could be on the Navigation screen and without having to first select a home screen; you can go directly to the radio screen. This is accomplished by keeping a tile or icon for each function visible at all times. So when you are on the navigation screen there will be compressed tiles for the audio, climate control, phone and so on, stacked on the side. This means no searching through endless pages looking for the control you need; a simple idea but a very intelligent one.

The digital gauge cluster is crisp and features several attractive themes; I stayed in the minimalist theme as I found it most fitting to the overall feel of the vehicle. The XC90 is the first Volvo to offer Apple CarPlay which allows owners to use the large tablet to control their i-pads, pods and phones. Other notable tech options include the usual suspects like park assist that will pull into a bay or Parallel Park the vehicle for you, adaptive cruise control and 360 degree bird’s eye view to make parking easier if you decide to do it yourself and many more. 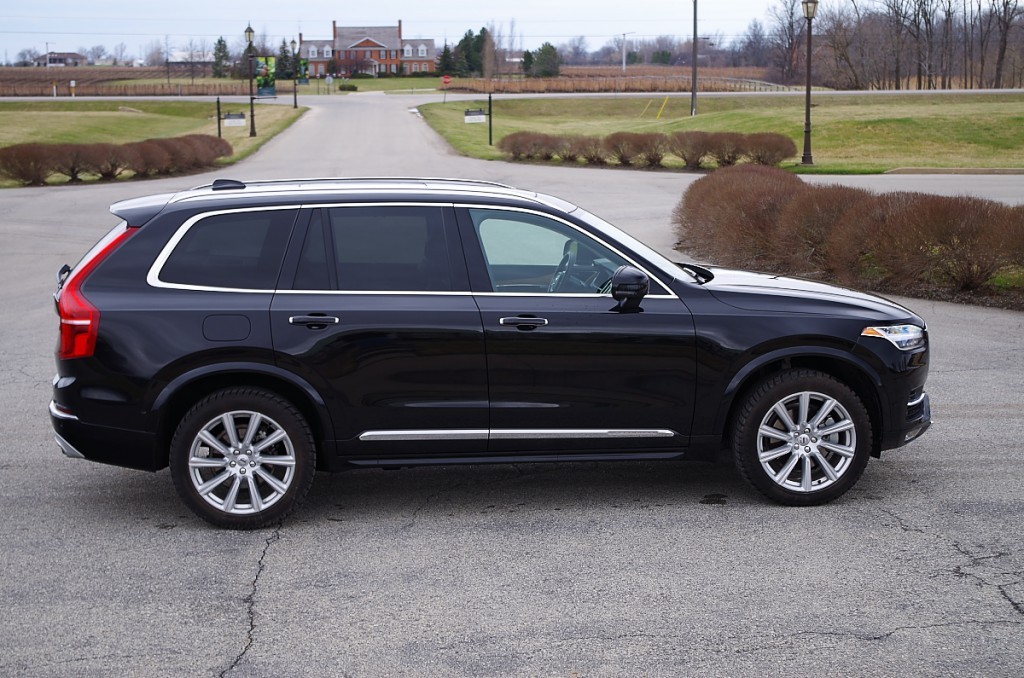 As you may expect from Volvo there is some cutting edge safety tech being premiered this year. The first is a system designed to prevent you from turning into the path of an on-coming car, an all too common cause of accidents at intersections. The Vehicles sensors scan the area and if they decide an accident is imminent the vehicle will stop itself. Another new tech is aimed at lessening injuries if the vehicle leaves the road way. The system will tighten the seat belts to keep the occupants in their seats firmly. The belts stay tight until the vehicle comes to a full stop. This is important because the seats are designed to absorb 1/3 of vertical impact force. Basically if you go off the road at speed and fly through the air like the Dukes of Hazard, when you land the seats will help lessen the chances of spinal injury.

Volvo has the ambition that by the year 2020 no one should be killed or injured in one of their vehicles. While this may seem impossible if anyone can accomplish this mission it is Volvo. The amount of safety built into the XC90 is impressive in addition to those mentioned above there is the Queue Assist that accelerates, brakes and steers the vehicle in stop and go and heavy traffic. Then there is the road sign recognition software. Gone are the days when you could tell the officer you did not realize the speed limit had dropped. This system displays the ever changing speed limit in the heads up display and the gauge cluster. There is auto braking, roll-over prevention and protection for all 7 passengers, and a pre-rear crash system that will flash the lights to alert the driver who is about to smash into you that you are in fact there, it even tensions the seat belts and applies the brakes. 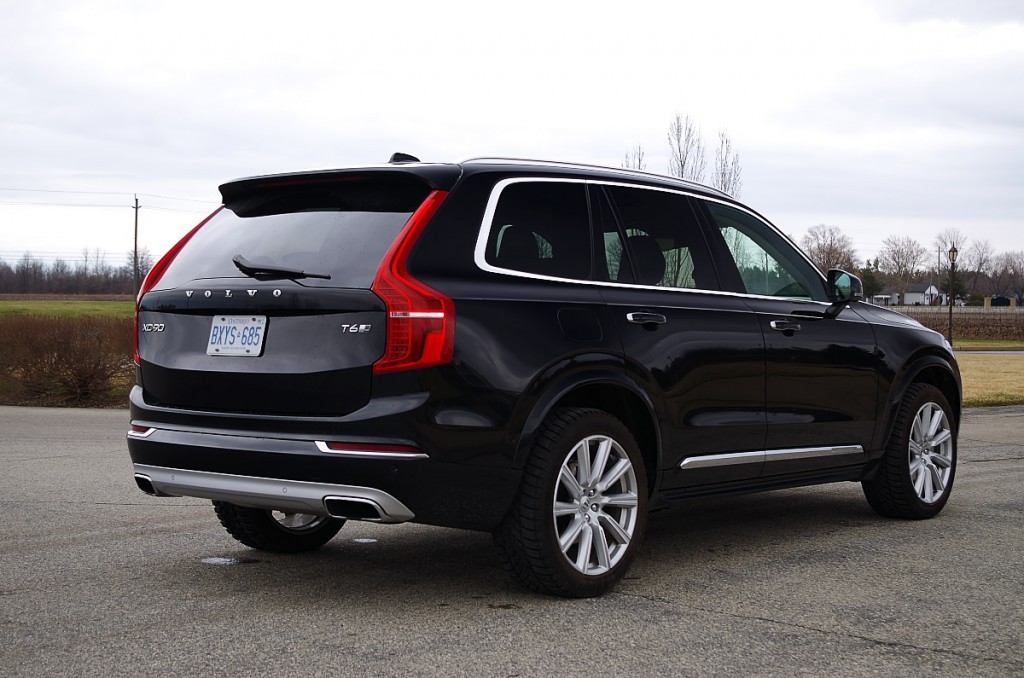 Volvo has gone a step further and developed the most efficient air quality control system I have come across. The aim was to protect those who suffer from allergies and chemical sensitivities from the pollen and pollutants that could be drawn in through ventilation system. The first step was to develop a more stringent filter that included a carbon element to absorb noxious fumes and unpleasant odours. Next was the addition of air quality sensors that when triggered, advise the vehicle to recirculate the interior air and close the outside inlets if the vehicle is in a tunnel with a lot of exhaust for example. The determination to deliver a fume free and safe interior has gone as far as employing a team of people to sniff various items and decide whether they are to whiffy or not.

Given the ends to which Volvo has gone to build the safest CUV out there it may seem unnecessary to check but the safety rating is so good that the 2016 XC90 is an IIHS Top Safety Pick. It scored the top score of “GOOD” in every test thrown at it and went on to gain a “Superior” rating for crash avoidance and mitigation. The bottom line is if you want to be safe, by a Volvo it’s not just a stereotype. 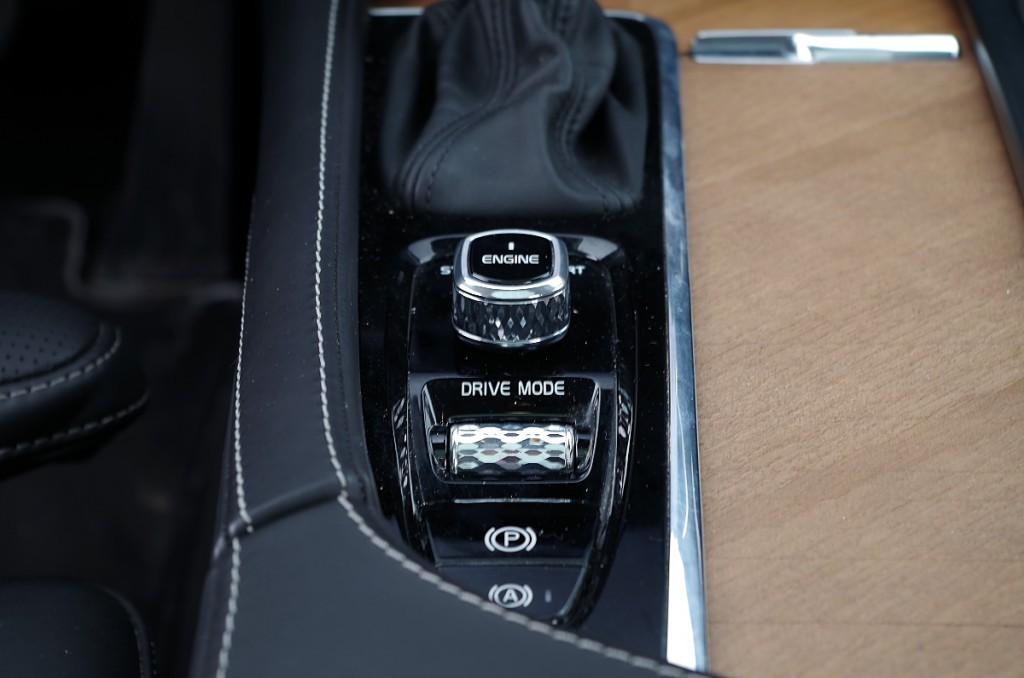 Moving on we should talk about the powertrain. Volvo offers 2 force-fed 4 cylinder engines. The one tested here was the supercharged and turbocharged T6. This 2.0L engine develops 320 hp and 295 lb-ft of torque, and while having two forms of forced induction sounds like a recipe for excitement, this is one CUV that relishes a steady and consistent drive. And that is not a complaint, rather a realization that there is more to life than pulse pounding acceleration. I was impressed by the quiet ride and incredibly smooth operation of this unit. The 8-speed auto shifts imperceptibly and the only sound to be heard is the faint whine from the supercharger. Once again simplicity has won me over and the focus on delivering absolute comfort and a feeling of invincibility while driving is starting to make more and more sense. 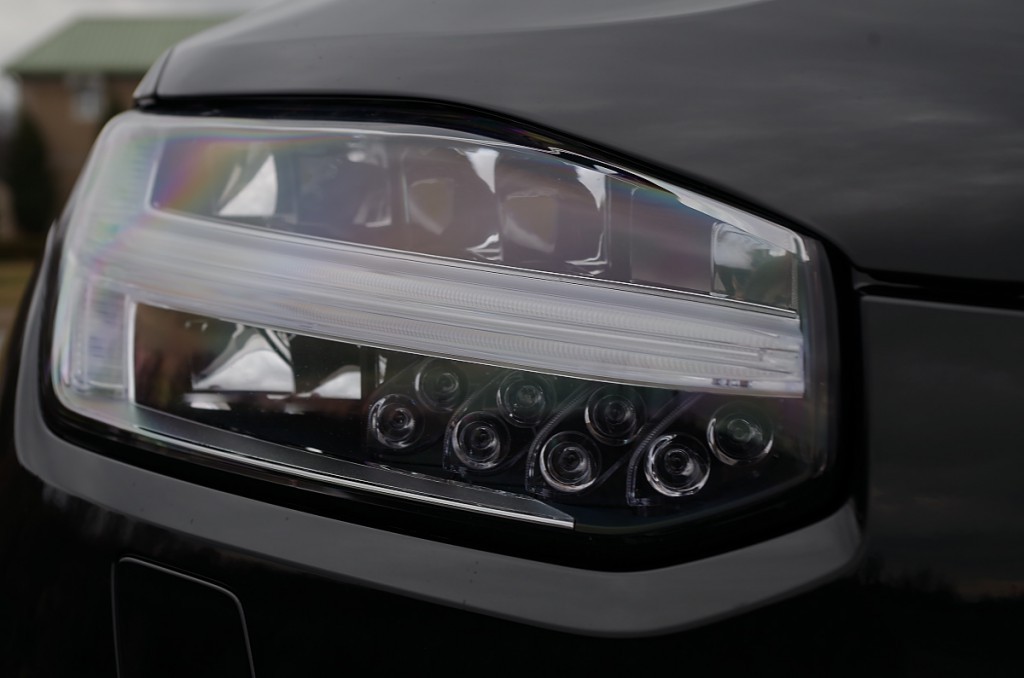 The T6 engine did a good job of using the premium fuel in a responsible manner. The official numbers are 11.5 city/ 9.5 highway/ 10.6 combined L/100km. This is close to what I saw as long as I kept my right foot restrained. The optional powertrain is dubbed the T8; it uses the same engine same with the addition of a 65kw electric motor tied into the rear axle. This setup develops a combined total of 400hp and 472 lb-ft; undoubtedly this is a bit more exciting without using out natural resources in a wasteful way. Volvo claims a combined consumption of 9.5L/100km, which given the weight and level of power is impressive. 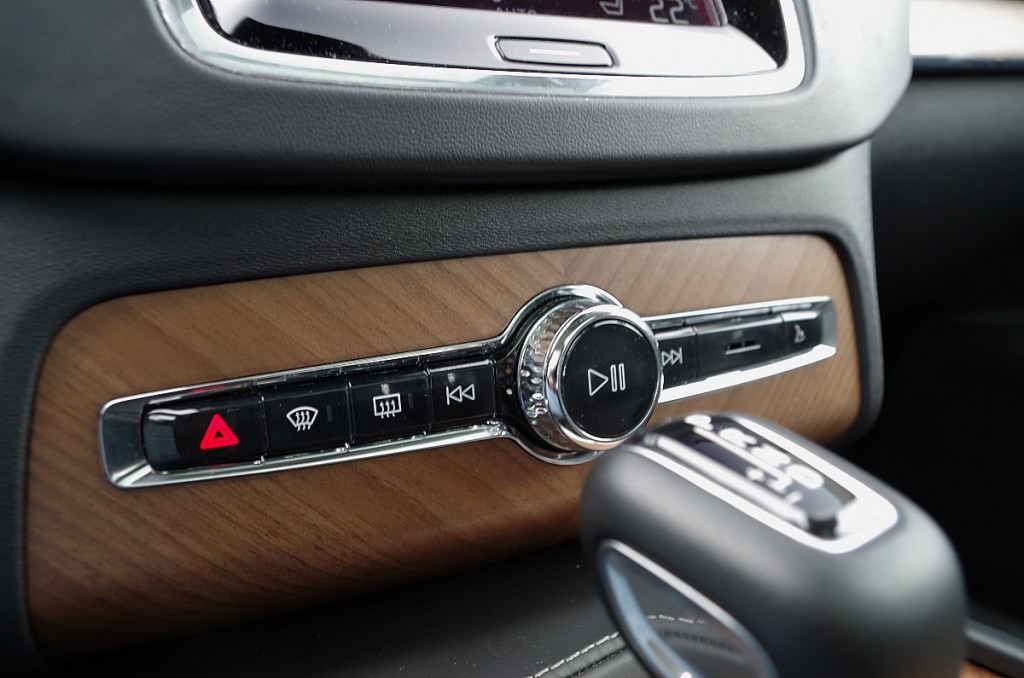 On the road the Mid-sized CUV continues to coddle passengers in an isolated cocoon of silence. Bumps are noticed, but never jarring, corners can be taken at surprising speeds without upsetting the suspension and body roll is all but none existent. The engineers have found the perfect balance of firmness and compliance. For $2,200 there is the option of air-ride that can make entry and egress easier by lowering a few inches and will likely offer an even more luxuriant ride. 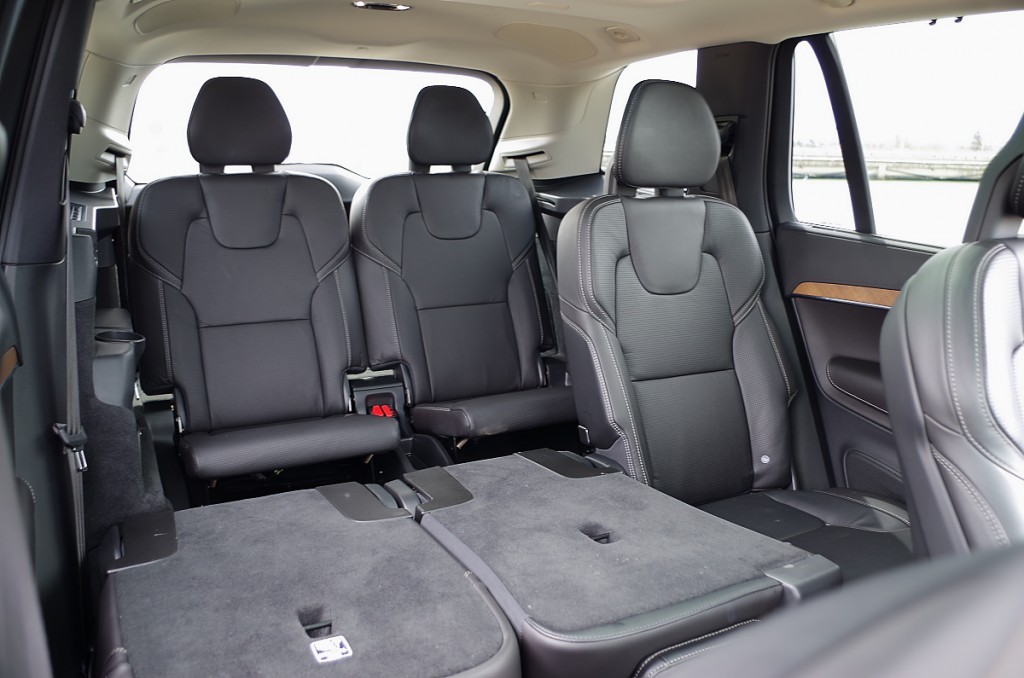 It has been a long time coming but the extra time given to the engineers and designers was in no way squandered. The long awaited replacement really is a fantastic vehicle. It delivers space for 7, the flexibility to customize cargo space and the focus on safety is second to none. Considering the fully loaded price is less than $75,000, the 2016 XC90 becomes an appealing alternative to the pricier Germans, and it does it all with logically minimalist Swedish flair.