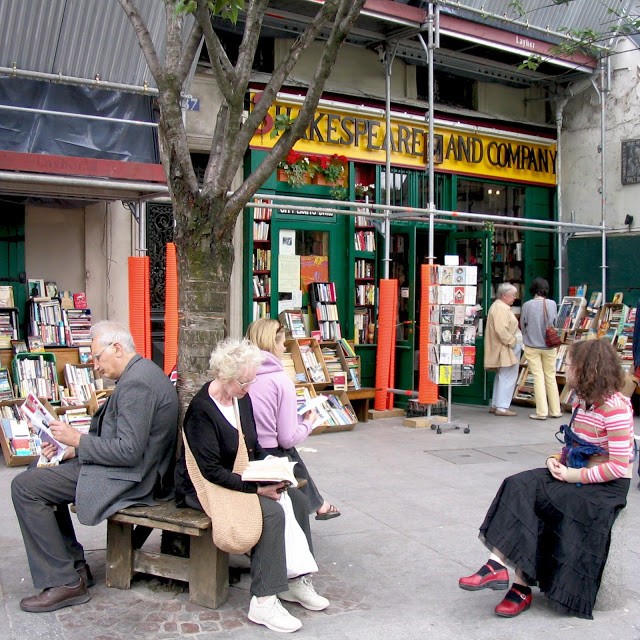 Books. Used book stores = magic. I can happily spend unknown quantities of time browsing, reading, and looking for the perfect book. One that suits my mood or an unexpected treasure I did not know I wanted:)
There’s a really special shop in Paris called Shakespeare and Company. Opened in 1951.  Tumbled towers of books and nooks and crannies stuffed with interesting titles and papers.
I created this bookstore like a man would write a novel, building each room like a chapter, and I like people to open the door the way they open a book, a book that leads into a magic world in their imaginations. —George Whitman 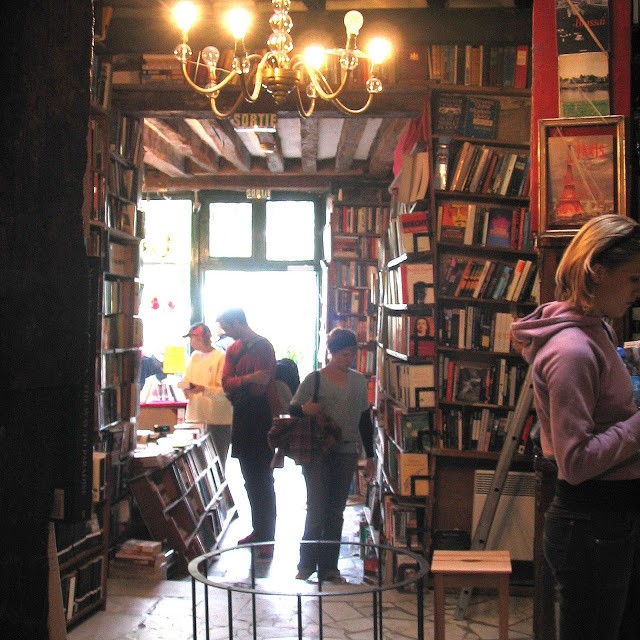 One day, after tea with its eccentric owner George, and a great chat, I left my cookbook with him, which would be stamped with their special mark and added to his shelves.

He gave me a book written by a friend of his from Nova Scotia which was a nice twist:)
I then went downstairs to browse and purchase something that caught my fancy.  I liked the look and sound of “The Museum Guard” and took it away with me…… only to discover the story was set in Halifax, N.S.! I was in Paris leaving a book written in Halifax and accidentally purchased one about Halifax!
But that is not what I wanted to tell you…. 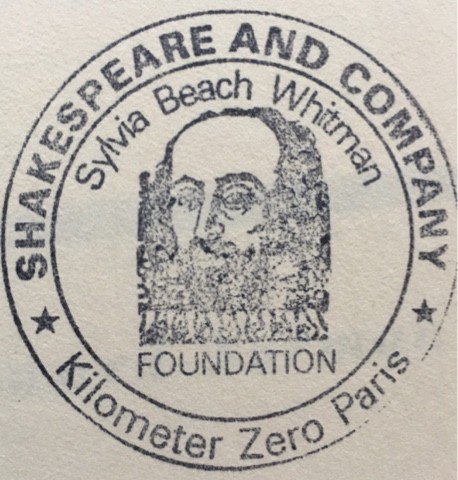 It is the hidden treasures occasionally found in used books that excite me even more than the book itself.
In “The Museum Guard”, I found two train passes, probably used as bookmarks!  A return fare from Paris to Epernay, the centre of the Champagne district.

This book, now mine, was once a travelling companion to someone who left Paris at 5:50pm on Dec 31, most likely on their way to a New Year’s Eve celebration!  Return was January 2.
I then noticed the name…Peter Slade….. 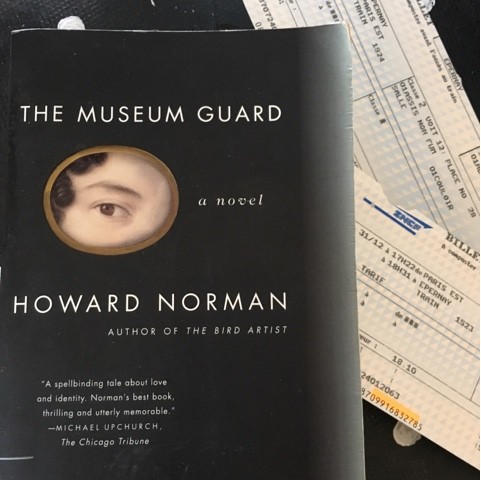 Well Mr. Slade, was it a fun evening? Did you get kissed at the stroke of midnight? Did it snow? Did you enjoy this book? Where are you now? ….. So many questions. 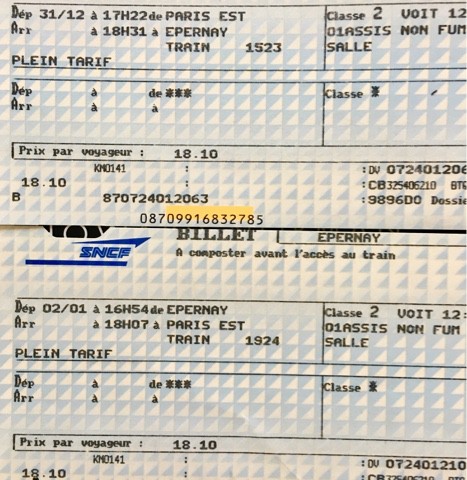 Mysterious bits of flotsam tucked between the pages and forgotten. Clues to a life lived that I can only imagine… 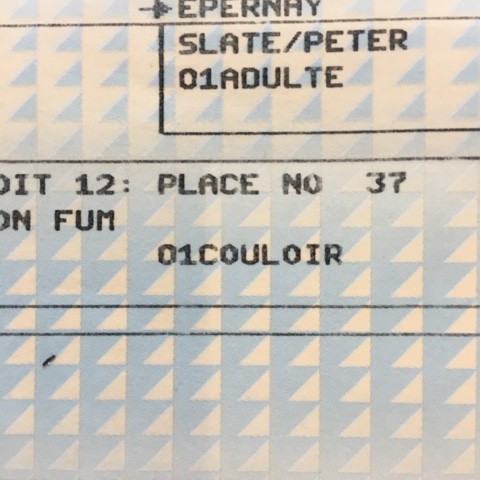 Another recent discovery was tucked into a second-hand book of Christopher Pratt images given to me by a good friend. He uncovered the addition when first poking through the pages and left them there for me to find:) Old stamps!  When a letter in Canada cost 43cents to post. Fun to find. The unexpectedness. The thrill of surprise 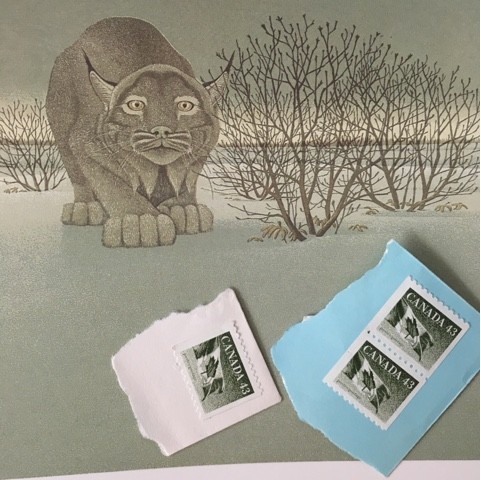 They were tucked into to a page with “stamps as art” that Mr. Pratt had created as a large installation for his dad’s office. His dad loved stamps. 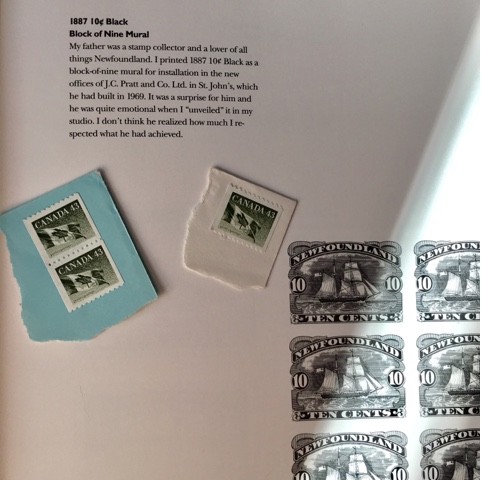 Just two weeks ago, I was in a favourite thrift shop and found an interesting book on Chinese medicine and women. Not what I was looking for but intriguing….
Once home, inside the pages I discovered a beautiful pressed lily!
It was a real gift. I was feeling quite sad that day and this flower felt like a message from a mysterious stranger crossing barriers of time and space. Once upon a time, that flower was bathed in sunlight and danced in the breeze.  Again questions…. What was the occasion? Why? What prompted the previous book owner to save the flower? Did they press it and forget? Tangible evidence of a memory, lost to them now but bequeathed to me, creating a new story. 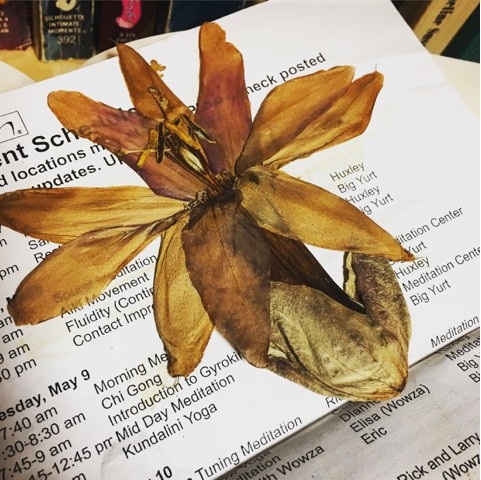 Used bookstores and their treasures. Not all of them are the literary kind:) Oh, and check out this photobomb of a couple reflected in the mirror. My back was to them. I did not see them in this picture until now! They look wonderful.  Were they really there? 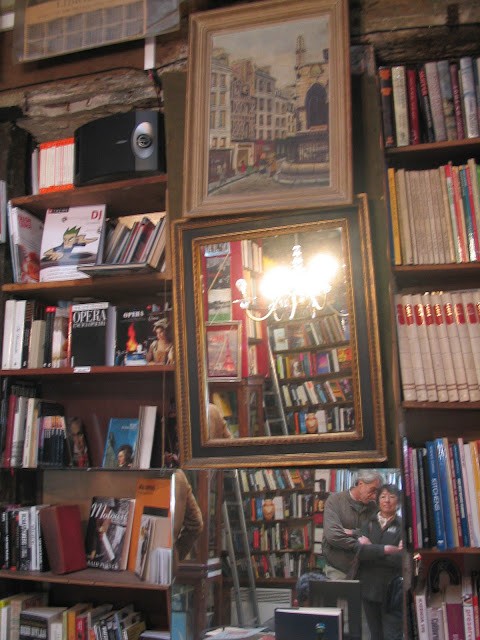