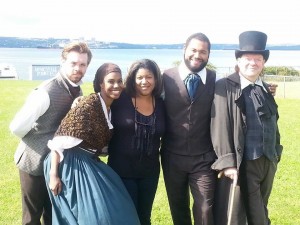 In his writer’s message in the program for Settling Africville, award-winning poet and playwright George Elliott Clarke says, “In my view, the African American Refugees of the War of 1812, when they escaped from bondage in the U.S.

and accepted resettlement in “Nofaskosha”, were undertaking a heroic act, especially because they landed in a colony that wasn’t expecting them and didn’t want them–except as the cheapest labour available.”

Clarke brings to life this important piece of Nova Scotian history in this play that celebrates the tenacity, hard work and community spirit of the Black Refugees who founded Africville.

The story centres on Richard Preston, an abolitionist who arrived in Nova Scotia in 1816 after purchasing his freedom from slavery in Virginia. Preston’s creation of the African Baptist Association gave villages like Africville a sense of identity by anchoring them around a church.

Settling Africville was commissioned by the Africville Heritage Trust to raise money towards the operating funds of the Africville Museum. The play runs from Saturday to Monday at Dartmouth’s Alderney Landing Theatre.

A FUNDRAISER for the Africville Museum