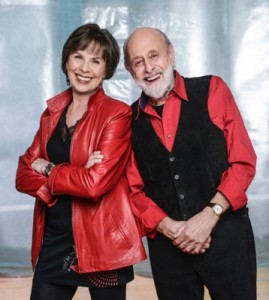 Sharon, Bram and their top-notch back-up band will touch down at the DeCoste Centre on Saturday May 11 and Rebecca Cohn Auditorium on Sunday May 12.  Both shows start at 2 pm.

This past September, 2018, marked the 40thanniversary of One Elephant, Deux Éléphants, the ground-breaking and career-producing first album of Sharon, Lois and Bram.

After 40 years of singing together, Sharon & Bram are touring the country in what they term “A Final Fond Farewell”.  The tour, which is attracting four generations of fans, spotlights the musicality that Sharon, Lois & Bram brought to their very first album, forty years ago, and that Sharon & Bram have maintained over the subsequent forty years. 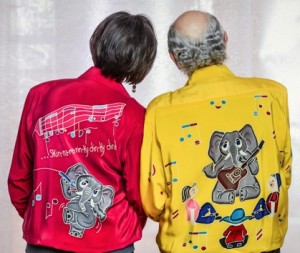 Since 1978, Sharon Hampson and Bram Morrison have been pre-eminent in all aspects of family entertainment across North America as members of the trio “Sharon, Lois & Bram”. Together, the threesome produced over twenty recordings, beginning with their iconic ‘One Elephant, Deux Elephants’, three song-books, six national TV specials, sixty-five episodes of The Elephant Show, and fifty-two of Skinnamarink TV. They have appeared in every major concert hall in Canada, and many in the United States including Carnegie Hall, Lincoln Center and the White House in Washington just to name a few. They have received countless awards, including Gold and Platinum Records and JUNO awards for Best Children’s Album. To date, they have sold millions of albums worldwide.

Sharon and Bram have carried on together since Lois Lilienstein stepped aside from live performing in 2000.

A Sharon and Bram show is a sing-along concert for the entire family, featuring such well-loved favourites as “She’ll Be Coming ‘Round the Mountain”, “Five Little Monkeys”, “One Elephant”, “Tingalayo”, and, of course, “Skinnamarink” as well as exciting new songs.    “We love singing with our audiences; the sound of families singing together and the expressions of delight on the faces of parents and children as they share the music, bring us deep satisfaction”, say Sharon and Bram.

Sharon and Bram, with Lois, have supported many social welfare programmes in Canada and the US, such as school breakfasts for learning, encouraging parents to inoculate their children and, internationally, as Goodwill Ambassadors for UNICEF in North and South America, for which they received the Danny Kaye Humanitarian Award.

For their years of work providing the best in participatory music for children and their families, Sharon and Bram have been inducted into The Order of Canada, the highest honour in the country.

Lois Lilienstein  passed away in 2015 after battling a rare form of cancer.