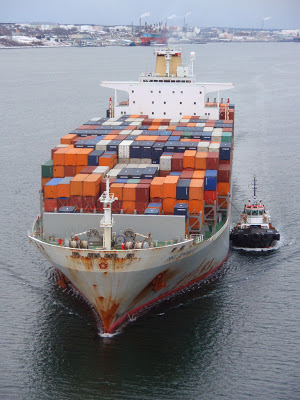 An incident was averted thanks to the use of a tethered tug that was able to stear the ship and stop the ship.

Probably the worst case scenario is a ship hitting a bridge. The towers are protected by rocks, so they are likely safe, however most of the large container ships must pass directly in the center of the bridge, and then do so with about 2m to spare – the height of an average doorway.

(Left) You can see on of the tugs tethered to the side of the OOCL vessel. there is another at the rear. This shot is from the MacDonald bridge, and you can see how close the vessel comes.

I posed some questions to Halifax Harbour Bridges, they were very prompt with their responces. Alison from Halifax Harbour bridges Confirmed they Monitor Marine VHF. And also provided the following about this specific Incident

On commercial shipping we primarily deal with Halifax Traffic. In this incident a PAN PAN call was not issued. However, we set up for a PAN PAN situation (standard procedure). We remained in a heightened state of readiness until the ship cleared the bridge and was put at anchor. Our operations centre monitored the passage through our zone using our security cameras (standard procedure) .

HHB routinely conducts drills on emergency procedures internally and in partnership with HRM and the provincial EMO for incidents on, under and around our facilities.

The ship could also ground. This most recently happened near Woodside on 07 June 1992, the Swedish-flag container/roll-on roll-off vessel “CONCERT EXPRESS” was under the conduct of a pilot in Halifax Harbour in dense fog. During a manoeuvre around a vessel at anchor, the “CONCERT EXPRESS” grounded and sustained extensive hull bottom damage.

Lets also not forget the possibility of a collision with another vessel – HMCS Preserver had power issues not to long ago and Struck the Nova Dock.