Last Saturday, Shoppers had the 20x points, so I was there picking up a few things. Nothing major 🙂

The first item on the top left corner is Gosh Cover Me Up Makeup Mousse in Champagne(#04), on clearance for CAD5.25 (reg. CAD21). I never knew Gosh had mousse makeup, so I thought I could compare it to the Maybelline Dream Mousse I had. 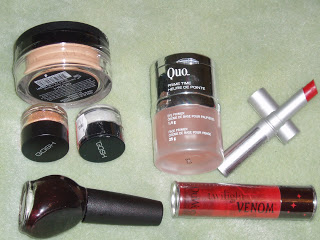 On the right is Quo Prime Time Eye and Face primer (2 separate containers in 1 bottle) which I didn’t know Quo had. Cool concept, don’t you think? I’d love to see how well they work. Oh, and it was on sale for CAD9 this week (reg. CAD16). I also got a Quo Stay Put Lipstick in Seduction, a cool red colour. Quo lines have been extended quite intensively, I have to say.

Also found Duwop Twilight Venom on sale for CAD8.99 (reg. around CAD16, I can’t remember), thought I could give it a try, at least for the cool name. I’m into red and dark red lip colours lately, as they show up better on my pigmented lips.

From the nail polish shelf, I saw this Nicole by OPI Black Cat-cha Later on clearance for CAD3.99 – the only shade at this price. It’s a lovely dark burgundy shade, could join my dark Nicole army, lol. 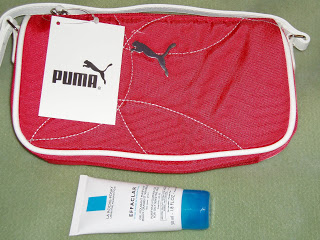 And believe it or not, Shoppers does have GWPs, at least at this location I went to. Maybe because I was spending quite an amount of money (half of it was for the swap I am doing), the lady pulled out some stuff underneath the counter to give me as a gift 🙂

And it was a bright red Puma shoulder bag and a sample tube of La Roche-Posay (another Canadian brand) Effaclar Purifying Foaming Gel, supposed to be for acne/ oily skin. Great to try!

I feel good as I gave Quo some attention with this trip to Shoppers (party thanks to the swap), as it probably deserves it. Shoppers could do a little more PR work for its home brand, as its product quality so far is not bad at all.

There were a few other Quo products on sale this week, so feel free to check them out. Words on twitter is that Shoppers is doing a “secret” x20 Pharmaprix Optimum points event tomorrow. You’ll need to bring in this coupon. Note that it said Pharmaprix, so it might not be a nationa-wide but rather a province-wise event. Plesae check before you use it.