[Next up in the shopping “home for the holidays” guest posts is a woman who’s returned home after several years abroad. She gives her unique perspective on opening up shop in Halifax and the importance of the local market in staying afloat.]

Last week I caught a portion of a radio interview between David Suzuki and Mohamed Waheed, Vice President of the Maldives. Waheed was describing plans for making his country the first to be carbon-neutral in the next 10 years. Toward the end of the interview Suzuki remarked on the irony of poor countries (like Maldives) – the least to blame for the world’s ecological problems – contributing the most toward addressing these problems. Waheed’s response was (paraphrased): “we are all on the same planet. We are all in the same boat. It doesn’t matter who put the holes in the boat. What matters is that we work together to patch the holes so that we do not sink.” 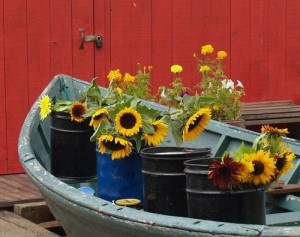 While Waheed was referring specifically to environmental issues, his statement had many applications for me. Sometimes a problem requires a combined effort to solve, regardless of who’s at fault.

When I moved to Halifax just under a year ago to start my own business I noticed a change in the city. Though it still felt small, it seemed to have lost some of it’s neighbourhood charm. Businesses seemed bigger, more generic, and less personal. There were markedly less neighbourhood “spots”; fewer small, locally-owned businesses, and an increased number of chains and high-end bars and restaurants. Streets like Barrington Street, once a thriving strip of independently-owned restaurants, bars and shops, was now largely barren. Where were the cheap and cheerful cafés, affordable boutique shops, neighbourhood pubs?

Other noticeable changes, thankfully, were more encouraging. A vibrant local food and wine community was buzzing. A few miles away people were producing wine that rivalled some of the best in the world, others were making wonderful cheeses, or smoking and brining meats. There was a whole legion of local bakers, sustainable farmers and artisans making incredible products. People were getting excited about the ‘local movement’. Consumers were interested in the personal experience, they wanted to know who they were buying from, where the product was coming from and were prepared to pay for experience.

As I began to flesh out the details of my business, I quickly discarded the idea of having to “import” the best of everything. Having lived abroad for about a decade I had initially felt that Halifax needed a little bit of Europe: the best wines from France, the finest cheeses from Spain, charcuterie from Italy, etc. But now I knew that many of these products were available right here, or pretty close by. I started speaking to local producers and merchants, and saw their passion and energy for what they do. I got to know the faces and first names of people I’d be getting my product from. To my delight they knew their craft inside and out and completely stood behind their products – it would be a refreshing and sensible way to do business.

It was obvious to me how we could equally benefit from supporting one another: what was good for them, was also good for me. And good for Halifax, too, since anytime a customer visited us (i.e local business owners) the money would, in turn, go back into the community. A win for everyone.

To me, it is simple. Small, locally-owned, neighbourhood businesses are the lifeblood of a city. Local business people, and their supporters, take a particular interest and pride in their community in a way that big, faceless businesses can’t. Halifax needs an even stronger network of local, inter-dependent producers, suppliers and merchants (and a healthy customer base to support them). These are not new revelations, and I’m no authority on the subject. But this is just what I see. I hope that in becoming a small business owner in Halifax I will be doing a small part in contributing toward a vibrant, sustainable future for the city, and at the same time, patching a hole or two in our boat.

Heather Rankin is a luddite girl trapped in a technocratic world. Loves wine, food and music. Recently returned to her homeland after 10 years abroad. Follow her on Twitter @curlyluddite.

Shopping locally: we’re all in the same boat
https://haligonia.ca/shopping-locally-were-all-in-the-same-boat-8100/