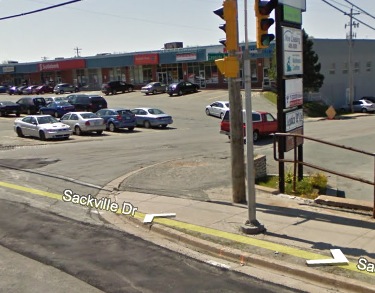 On April 15, 2010 HRP officers arrested Chan by Gottingen Street and after a brief struggle, seized a hand gun from him.  Further testing of the hand gun tied the weapon to the shooting in Lower Sackville.  Chan will be appearing in Nova Scotia Provincial Court in Halifax, N.S. on May 31, 2010, and is charged with Attempted Murder and 11 related weapon charges.
Thursday, April 8, 2010 Halifax Regional Municipality (HRM), N.S…. Members of the Royal Canadian Mounted Police (RCMP), Halifax District responded to shots fired in a business on Sackville Drive in Lower Sackville this afternoon.


View Larger Map
Shortly after 3:00 PM, a suspect entered the Catch a Look clothing and hairdressing shop on Sackville Drive.  The suspect fired two shots and quickly left the business as a passenger in a red 4-door car.  No one was hit in this incident, and police do not believe it was random.

The suspect is described as a light-skinned black male, approximately 5'6". The incident is under investigation.

If you have information regarding this shooting, you can contact any RCMP office, Halifax Regional Police, or Crime Stoppers anonymously anytime at 1-800-222-TIPS(8477) or by their Secure Web Tips at www.crimestoppers.ns.ca  Calls to Crime Stoppers are not taped or traced and if police make an arrest and lay charges based on a tip, callers qualify for a cash award from $50 – $2000.