The title whose name we dare not spell. And how does prime time television handle it?

Question: How will you say it on air? Thursdays at 8:30, watch …
Tassler: “Bleep.” He’ll say the word “bleep” audibly, the actual word. “Bleep.”
Question: That’s what the promo announcer will say?
Tassler: Yes — “Bleep My Dad Says.”
Question: It’s not going to be a bleep audio effect?
Tassler: No. It’ll be “bleep.” B-L-E-E-P, bleep. 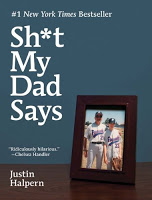 Sh*t My Dad Says by Justin Halpern is a social media sensation that has found a new life in good old fashion print and television. If parents think that their children aren’t listening to them, they may be pleasantly surprised. Halpern, in his late 20’s, moved back into the family home and began to record and broadcast via twitter his father’s opinions and musings. His feed rapidly went viral. In a short time period (days? weeks?) he had hundreds of thousands of followers (including me) and offers from television producers and literary agents.

A confident, educated man, Sam Halpern dished out his philosophy of life devoid of any political correctness or consideration of his sons’ more delicate feelings. Amongst my favourites: “Snausages? I’ve been eating dog treats? Why the f@#k would you put them on the counter where the rest of the food is? F@#k it, they’re delicious. I will not be shamed by this.” His pronouncements are homespun and brutally honest and, in context, you quickly begin to appreciate his take on the world.

Since you are reading a blog, I’m sure you know that a tweet is 140 characters sometimes in the context of a conversation and often not. Can this be turned into a cohesive book? Yes it can! Halpern has written an always hilarious and sometimes touching coming of age memoir which tells the story of an awkward adolescent who is overpowered by his always blunt and sometimes angry, though, ultimately in his own way, loving father. Put in context, the tweets draw of picture of family life you may wish you had or be thankful you don’t.

I haven’t seen the television show yet, but the reviews are less than great. (Apparently Shatner can say THE WORD, but it is bleeped in the title). Maybe the charm of the twitter feed and the book lies in its brevity and this doesn’t translate well into an ongoing television series.

Those who appreciate Halpern’s sense of humour (or cleverly disguised swear words in titles) might try:

Drink, Play, F@#k : one man’s search for anything across Ireland, Vegas, and Thailand by Andrew Gottlieb.

From the publisher – “When eight years of marriage end in a nasty divorce, some people might turn to psychotherapy. Others might turn to spirituality. But Bob Sullivan decided to:

Drink-
“Give me two fingers of Jameson,” I told the barman. “Start at my pinkie and keep pouring ‘til you reach someone else’s thumb.” The next thing I remember was waking up in the middle of Ha’penny Bridge wearing nothing but an adult diaper and a multicolored clown wig.“

Play-
“My advice on playing the ponies is, “Don’t do it.” It’s the biggest sucker bet in town. Simply put, I never gamble on horses. Unless I get a funny feeling, or if one of the horses has a name I like.” and so on, you get the picture.