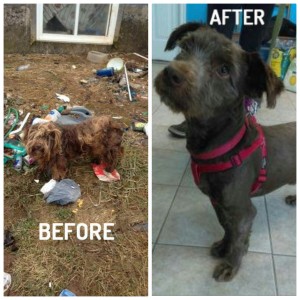 Mary Julian of Sipekne’katik (Indian Brook) has been sentenced for animal cruelty after pleading guilty to causing an animal to be in distress; contrary to section 21(1) of the Animal Protection Act of NS.

In January 2017, SPCA officers responded to a concern received from the public alleging that there was a heavily matted dog tethered outside of Julian’s residence.  Officers attended the property on Sipekne’katik reserve and discovered a dog in Julian’s yard covered in matts and feces. The dog smelled of urine and was shivering from the cold. No water or shelter had been provided for the dog.

Julian was unwilling to relieve the distress of the dog so the SPCA officers seized the dog and transported it to the Dartmouth Shelter for immediate treatment. One kg of matted hair was shaved off the dog and an embedded harness and collar was also removed.

Julian was handed a 5 year prohibition from having dogs living at her home or on her property and also ordered to pay the SPCA $465.00.

The dog made a full recovery and has since been adopted through the NS SPCA.

“Fortunately for this dog, SPCA officers were able to intervene and bring this dog to safety. This case goes to show the importance of reporting animal cruelty in your community.” Chief Provincial Inspector, Jo-Anne Landsburg