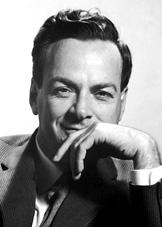 Before Sheldon and Leonard (Big Bang Theory) made theoretical physics charming, if not comprehensible, there was Richard Feynman. When a colleague saw me holding this book, she said, “Ooooh Richard Feynman!” in much the same way another would say “Ooooh Paul Newman”. Feyman had a long and distinguished career. He won the Nobel Prize in 1965 for his contributions in the field of quantum electrodynamics. He was involved in The Manhattan Project and The Challenger Commission, but his legacy will be that of a teacher.

In Six Easy Pieces: essentials of physics explained by its most brilliant teacher Feynman conveys complex topics in simple, understandable terms. The essays were based on lectures which had the intent to excite intelligent and enthusiastic students about physics. Feynman talks about physics in terms of an “expanding frontier of ignorance”. Feynman, also known as “the great explainer” used every day analogies to explain complex topics. In this book there is an explanation of the basics of physics and how physics relates to the other sciences. Feyman’s strengths lay in his ability to describe complex ideas visually rather than mathematically and his ability to enthrall young (and not so young) minds.

Feynman had a keen sense of showmanship and will be forever remembered for his inspired demonstration of why the Challenger Shuttle exploded with an elastic band dipped in icy water. Feyman the man has generated as much interest as Feynman the scientist. If you are interest in this bongo playing, safe-cracking, practical joking physicist, you might like to try his autobiography Classic Feynman: all the adventures of a curious characters. “Not many Nobel laureates in physics amuse themselves by playing the bongo drums and cracking safes. But the capricious personality of Richard Feynman contained more than a few surprises. And it is the sheer unpredictability of this high-spirited genius–partial to the company of Las Vegas showgirls when not in the Caltech lecture hall–that has attracted so many readers to his disarmingly candid memoirs, Surely You’re Joking, Mr. Feynman!0 and What Do You Care What Other People Think?0 Now chronologically collated into one omnibus volume (packaged with a CD of one of Feynman’s signature lectures), these memoirs display perhaps the most flamboyant personality in modern science.” – Booklist

Science readers might also appreciate The Elegant Universe: superstrings, hidden dimensions, and the quest for the ultimate theory by Brian Greene. “In a rare blend of scientific insight and writing as elegant as the theories it explains, Brian Greene, one of the world’s leading string theorists, peels away the layers of mystery surrounding string theory to reveal a universe that consists of 11 dimensions where the fabric of space tears and repairs itself, and all matter-from the smallest quarks to the most gargantuan supernovas-is generated by the vibrations of microscopically tiny loops of energy. Green uses everything from an amusement park ride to ants on a garden hose to illustrate the beautiful yet bizarre realities that modern physics is unveiling. Dazzling in its brilliance, unprecedented in its ability to both illuminate and entertain, The Elegant Universe is a tour de force of science writing-a delightful, lucid voyage through modern physics that brings us closer than ever to understanding how the universe works.”- publisher