L-A: I was looking for Revenge last night and ending up finding the American Music Awards. You can only imagine my disappointment. I decided to abandon my original plans for today’s post and watch a few minutes as a kind of sociological experiment. I wanted to know what it’s like to be Ally and watch the music that she loves. This is what I learned.

Six Things I Noticed About the AMAs

1. I’m not so sure there are actual awards.

Because I only saw one given out in the half hour I was watching. Weird. It was all very, very elaborate dance routines and costumes.  While I can’t get on board with Ally’s love for Pink, I will say I was almost impressed with her ability to do what looked like a pairs figure skating routine (minus the skates)/interpretive dance piece about what appears to be an abusive relationship  It was weird, but I like pairs figure skating, so I kind of dug it.

2. Lady Antebellum is no lady

There are actually three of them and only one is a lady and she seems to cover all her lady bits with respectable and totally normal outfits. I forget this. I always thought Lady Antebellum was country’s answer to Lady Gaga and I’m always disappointed when I’m reminded that isn’t the case.

Does country music have an answer to Lady Gaga?

3. No one phones it in better than Usher

Ally often posts Usher videos. I try to watch, but usually give up after a minute. I just can’t get behind Usher. Tonight was an excellent reminder of why (aside from totally not digging his music). 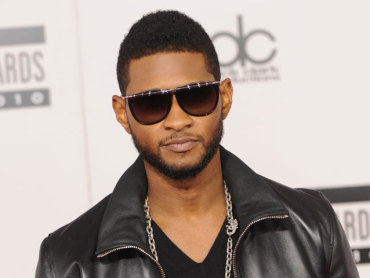 This isn’t from last night. Last night’s glasses and chain were gaudier.

While I’m glad they awarded anyone over Chris Brown, I’m not entirely impressed with his giant, ugly ass sunglasses or that he needed to check his phone while on stage. At this point in your career, you should be able to thank a few people without your cell phone. Or, if you’re too famous to actually know the names of your underlings, just thank Jesus, drop the mic and walk off stage. Anything but phone in the acceptance speech you’ve got saved in your Dropbox app.

4. Speaking of Usher, what is his protegee wearing?

Biebs, I’m trying. I really am. I defended my decision to listen to Boyfriend on multiple occasions. But prepare for bafflement in 3…2…1… 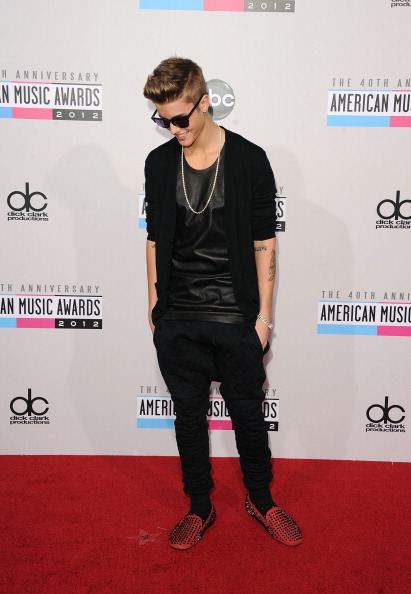 A leather shirt? A drop crotch? Studded bedroom slippers? What? 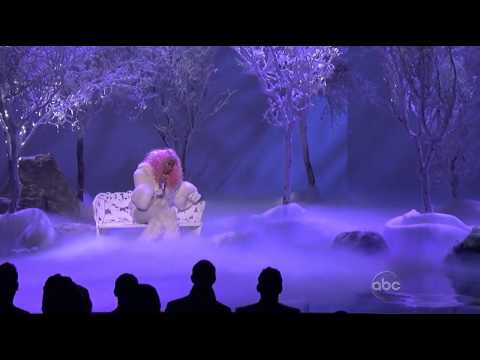 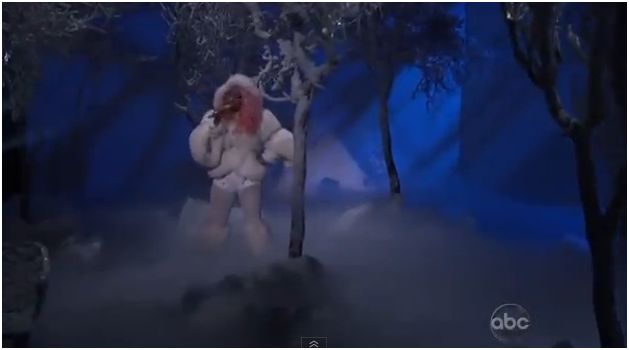 In case ABC cease and desists that video, here’s the getup.

6. Ginnifer Goodwin, this is not okay. 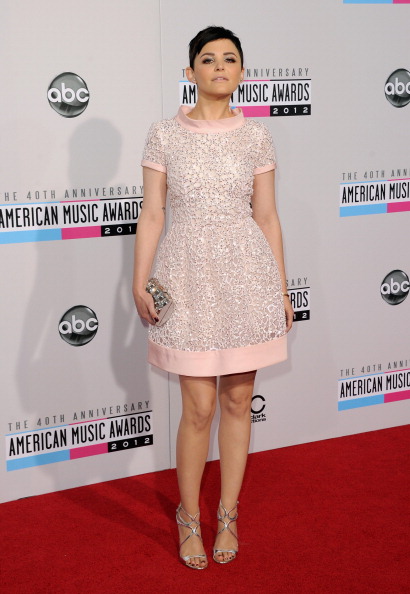 I don’t hate the dress. It’s actually kind of cute. The neckline is my jam, although the giant ribbon at the back of the neck, not so much. I’m sure it probably weighs about 100 pounds and she’ll be really frigging glad to get that off at the end of the night. No, my problem isn’t with the dress. It’s with the following: her Pose Hard stance on the red carpet is quickly turning her into the new Zellweger. I hear Ginnifer Goodwin is actually a lovely person, but you’d never know it from her red carpet photos. Even worse than the Pose Hard was the Clockwork Orange lashes  she had going on. I did figure out they’re not painted on, but they still look awful and weird.

I made it through about 36 minutes before bits of my brain started to leak out of my head and I decided to watch old episodes of AMC’s The Killing instead. I have no idea how Ally enjoys this stuff. I need dark, dreary, painfully slow moving plots about murder and secrets and lies to wash my brain out.

We don’t want to be like Usher at the American Music Awards.

In news completely unrelated to the American Music Awards, a change to FPQT is coming up. We’re going to scale back how often we post – from three times per week to twice a week. We’ve got a busy few weeks ahead of us outside of the blog (craft show anyone? Dec. 1 and 2!) and we figure we’re less likely to phone it in if we’re not pushing ourselves to meet three deadlines a week. This should hopefully mean better reading for you. We might get back to the three times a week after Christmas, and I’m sure there will be bonus post and guest post from time to time, but for now we’ll only be twice a week.