I am not sure if you, Dear Reader, have heard the latest shocking book news. Charlaine Harris has written and published her final Sookie Stackhouse novel, Dead Ever After (M). And what a way to end it! Harris has received death threats, suicide threats and threats to cancel book orders. The reason for this is some people are not happy with the ending! Harris wrote the following on her Facebook page:

“I wrote the best book I could, and I’m confident I stayed true to the characters I’d been writing for so many years.….I hope on the whole that many people are entertained by the book and find it a satisfying end to Sookie’s adventures”.

Harris’ post prompted more than 2, 000 responses but I will leave it up to you, Dear Reader, to read them yourself. On Amazon the novel received 124 five star reviews to 366 one star reviews! I personally liked the ending, but found the plot a little weak. I felt some things were written just to have some of the characters pop up briefly as a goodbye to them. As with some series the author starts out with a wonderful fresh idea but in time…..well I thought the last couple of books lacked “spunk”.

For those readers unfamiliar with the series, Charlaine Harris started writing the Southern Vampire Series (also known as the Sookie Stackhouse Series) in 2001. Featuring a telepathic waitress, Sookie Stackhouse, Harris created a detailed mythology and alternate world view in a sleepy Louisiana town of Bon Temps. Vampires have “come out of the grave” and into the public since the Japanese have created a synthetic blood named True Blood. Other supernatural creatures are watching and waiting the public’s reactions before revealing themselves.

Due to her special powers Sookie is an unappealing “freak” to humans. Can you imagine having insight to what everyone around you is thinking, even your potential boyfriends? Sookie is attracted to vampires because she can not “hear” their thoughts. Vampires are attracted to her for many reasons, one of which are her powers. I will let you, Dear Reader, find out what these powers are for yourself. The novels have attracted readers of all ages and genders. 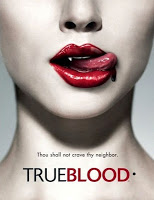 I became addicted to the series for a number of reasons. I really like the “blue collar” aspect of Sookie’s life. The men in her life each had their own attraction, even her brother. The humour, social equality and romance blended well. Each of the characters, even the “supes” were believable in their own way. Even though Dead Ever After is the last of the series Harris did not leave Sookie completely alone. She has written a little coda book for the series entitled After Dead: what came next in the world of Sookie Stackhouse which is due to be published October of this year. Fans can still visit the world of Sookie through the HBO television series True Blood (M).

So whether you like the last book or not, the series is well-worth reading in my opinion. So raise a glass of True Blood in honor of Sookie.