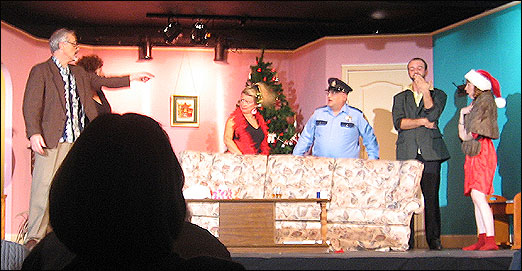 Bedford Players Theatre once again put on a five-star performance on Saturday with its production of "Sorry! Wrong Chimney!"

Laughter filled the theatre on Saturday evening in the All Saints Anglican Church on the Bedford Highway, as guests watched this Yuletide farce by Jack Sharkey and Leo W. Sears, directed by Jill Curley.

David Tuttle, played by Curtis Skinner, takes on a second job as a department store Santa so that he can afford to buy his wife Samantha (played by Stacey Fownes) a fur stole for Christmas.

She finds out that her husband is in fact not at the office. From this she makes the assumption that he is having an affair.

Problems are further enhanced when they’re joined by their neighbours William and Natalie Weldon (played by Michael Taylor and Michele Gaudet).

William the psyachiatrist causes a mix-up with his hypnotizing techniques, as roles are switched and even greater confusion is added to the already crazy mix-ups.

Kris Kreigle (played by Robin Saywood), his fiance Sheila (played by Karen Shewbridge) and a policeman (played by Darrel O’Neil) join the group and add even more to the wackiness of this comedy.

Tickets are on sale online at www.bedfordplayers.ns.ca or by calling 832-3300.

Tickets cost $15 for adults and $12 for students and seniors.

Stacey Fownes (Samantha Tuttle) is back on stage again after directing last season’s Maggie’s Getting Married, feeling like she’s back where she belongs. Stacey completed her honours in Drama from Bishop’s University and was thrilled to take part in such productions as Macbeth, Dangerous Liaisons, A Flea in Her Ear. and Les Belles Soeurs. Her roles with Bedford Players are numerous and include Frances in No Sex, Please, We’re British, Phoebe in Romantic Comedy, Buffy in There’s a Burglar in My Bed, and Susie in Who’s in Bed with the Butler?. Thanks go to her office mates of Presse Mason. Love always to her folks.

Michele Gaudet (Natalie Weldon) is making her debut with Bedford Players. She has previously been seen on stage with The Gilbert & Sullivan Society and backstage with TAG, but she decided that dressing like Joan Collins in Dynasty would be the best way to test the waters in Bedford. While dea ling with the minutiae of a stage production by night she deals with the minutiae of medical laboratory testing at the IWK Health Centre by day. Michele believes that trying to herd two cats at home has given her special skills to deal with community theatre personnel. Special thanks to the cast and crew for providing such a welcoming atmosphere, and to Darrel for understanding that sometimes a girl requires another husband for a few months. Thanks, and enjoy the show!

Curtis Skinner (David Tuttle) is excited to be in his second show with Bedford Players, the previous one being Maggie’s Getting Married. He thanks them for taking him back! Hailing from Newfoundland, Curtis has been acting since he was a teen in everything from Shakespeare to Musicals, Dramas to Kid’s Shows. He has many to thank along the way, most of all his fiancee, Lori, for having to deal with all his different characters. He also wants to thank the Cast and Crew fir all the work they have put in to this production, and of course Mom and Dad.

Michael Taylor (William Weldon) is back with Bedford Players for his second appearance in a row, having recently appeared as Tom Duncan in Maggie’s Getting Married in the Spring of this year. That was such a great experience that he could not wait to get back on stage in front of the wonderful audiences Bedford Players’ Production attract. He is once again thankful to be working with such a talented and helpful cast and crew, from which he has already learned so much. Mike wants to thank his wife Lisa and daughters Hillary and Lindsay, who have been a source of inspiration and support during his foray into acting, as they have been in other parts of his life. The thing he hopes for most out of this production is that the audience has a truly enjoyable time and that they make future Bedford Players’ Productions part of their entertaining plans.

Robin Saywood (Kris Kreigle) started his ‘amateur acting career’ twenty five years ago, quite by accident really, and has been thoroughly enjoying himself in all aspects of community theatre ever since. Hubtown Theatre in Truro was his first step on the boards, coming to Bedford in 1994. This has been Robin’s ‘theatre home’ since then, with visits to the stages of TAG and Dartmouth Players. He says “it’s great to be back on stage here in Bedford, acting the fool.” The last time was as Brian Runnicles in No Sex Please, We’re British!-a dream of a part for him. Kris Kreigle is a bit of a nut, so it’s what you might call typecasting! Robyn wishes to thank you all for coming because without you, the audience, we’re nothing-so sit back, enjoy and have a great time.

Karen Shewbridge (Sheila) is happy to be in her second Bedford Players production. Sheila is a lot of fun and so is her partner in this Christmas caper-Kris Kreigle! Mother of two, Public Affairs Manager by day and a former broadcast journalist, her passion is the theatre and singing with anyone at anytime, including her buddies in what her husband calls her “garage” band. Some of Karen’s roles include: Ana in the Pulitzer-nominated play, The Clean House and Sister Robert Anne in Nunsense (Dartmouth Players), Kate in The Best of Friends (TAG), Deb in the film The Cab Driver (where she was nominated for a 2004 ACTRA award for Outstanding Performance Female), Lee in Marvin’s Room (Dartmouth Players), The Baroness in The Sound of Music, Morgan LeFay in Camelot and Mrs. Peterson in Bye Bye Birdie-all three musicals performed at the St. John’s Arts and Culture Centre in Newfoundland. Break a leg everybody!

Darrel O’Neil (The Policeman) is back for the second time performing with the Bedford Players after appearing in last year’s Sinners (where he also played a policeman???). Over the last couple of years he has performed in The Foursome, Jack and the Beans Talk, and Office Hours all with the Theatre Arts Guild (TAG). For the first 15 years of Darrel’s amateur career he was involved with the Gilbert & Sullivan Society of Nova Scotia where he was fortunate enough to play several roles both on and off the stage. Most notably Dick Dead-Eyes in HMS Pinafore and Wilfred Shadbolt in Yeoman of the Guard. He also served for many years on the Society’s executive. When not on stage Darrrel enjoys his daytime role as a Mechanical CAD Designer with a local Electronics Firm.