Okay bloggies, ya’ll know that something has been up because you’re all amazing and adorable blog readers and friends.  Your emails have warmed my heart each and every day I have received them when you show me how much support you give and how far the support has reached on this blog.

Now for each and every one of you who has emailed me or commented to show your concern for my very uncharacteristic MIA behaviour, I have responded by telling you that I was doing great and you needn’t worry.  But I couldn’t tell you why just yet.

You may remember that I recently found out from my doctor that I do in fact have PCOS.  I found out the results of an ultrasound I had last summer when I went to my doctor just before Christmas because you also may remember that I was feeling miserable (physically and emotionally) and was sure I had an ulcer or some variation of Celiac disease that I termed “Christmasiac disease.”

My doctor told me that while they don’t know definitively what causes PCOS exactly, they do know that there is a link with obesity and insulin resistance.  While I am still “overweight,” I have challenged myself and changed my life and transformed my body to a healthier weight starting from at least 298 lbs.  At the time of my highest weight, I did not know that I had PCOS and that it could play a role in making it difficult in becoming a Mom.

The best advice that my doctor could give was to “eat well and exercise” (among other options that also included some medications that have been successful for some women as well).  All I could think about is “well I’m already doing that” and felt a little defeated.  It didn’t occur to me at the time that she said that, that I had already done my body and my (future) family a tremendous service by doing just that losing over 100 lbs.

The doctor sent me for some tests checking for gastritis, an ulcer, and even hepatitis to explain my miserable state that I was convinced had been brought on by holiday overindulgences or some sort of virus.

In the meantime, there were other things that were important to “rule out” just for the sake of finding out what was wrong with me.  Turns out, it wasn’t just a “possibility” to rule out after all: 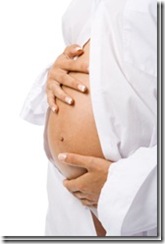 As a consequence of PCOS, I have irregular periods and I had no idea I was pregnant, I also didn’t know how far along I was, so we waited to tell anyone until we were able to confirm the details by ultrasound and to get over the first trimester.  Well now I can officially tell you all because I am now 12 weeks pregnant!

I don’t think you all have ANY idea how badly I’ve wanted to share this with you because:

and I was DYING to explain all of this to you because I hated the thought that you all would think that I fell off the wagon and abandoned you!

Plus I SUCK and lying so my plan of action has been to AVOID! lol

So what does this mean for “Angie All The Way?”

Well, like I said before, I am a blogger!  This blog (and YOU) have become SUCH and huge and important part of my life and I could never imagine it missing from my life.

So I’ve decided that while my focus at this point in time will not be on weight loss, it will still most certainly be on maintaining a healthy pregnancy and keeping weight gain where it should be (and for me is only 15-25 lbs). 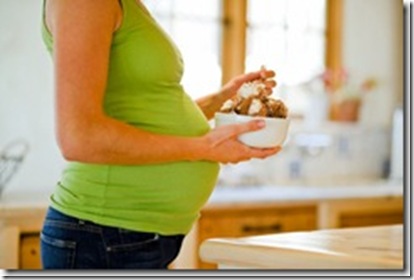 So I hope that you are all still interested in my new focus over the next few months.  Our baby is due on August 5th 🙂

I hope over the next little while I’ll have a new template and new look to the blog too (yes I’ve been saying that for like years, I know).

Thank you all for your amazing support that has helped me achieve what is now so abundantly clear to me as being the ultimate “goal” all along, even if I wasn’t quite aware of it until I was blessed with it.

~Angie (aka Mommy to be)