Sunday was a fantastic day all on plan.  It started with a delicious Spinach & Feta Omelet Rollup.  I just had to share it because it was a delicious and filling 4.5 POINTS (Yes I count half POINTS.  The online tracker uses them and I think that it matters!  Our meetings leader is going to check into it because we were the first to tell her that the online program uses them.  I’ll report back when I get the word on what she says.

So anyway, back to the amazing omelet rollup! 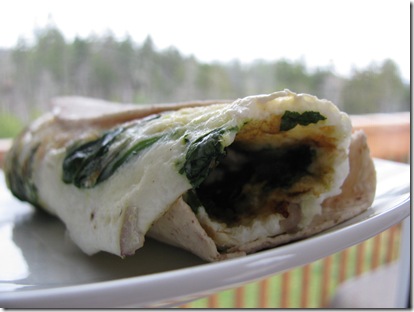 *You could remove either the feta or the cream cheese to save an extra POINT, but why?!?!? 😀 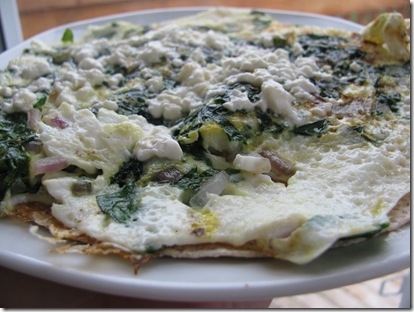 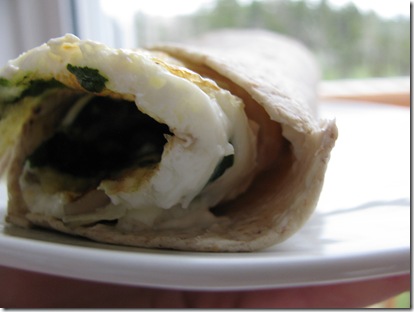 It ended up being a late first meal, more like brunch, so I still had plenty of POINTS left for the day.

I had plans to visit a craft fair with my friend Amy and then visit a relative in the hospital later in the afternoon, so I decided it was time to get my arse out for a run before all of that happened or else I wouldn’t have time!

I did a 45 minute run, half of which included tugging and correcting my overactive and curious pootch.  The first half also included Lucy’s random and impromptu sniffs and investigations which totally dictated my breaks.  After I dropped her off, the second half went much more smoothly than the first and I burned a respectable 550 cals and I felt amazing.  Rather than using the Activity POINT slider for calculating AP’s, I have decided that I’m going to count 1 POINT for every 100 calories burned.  So I earned 5 APs for the day!  Speaking of which, I learned on Sunday that while you can earn as many APs in one day as you want, you can only consume 4 on any given day (which now on the Momentum Plan is after you’ve used all of your Flex.  News to me, but apparently it works better for most people.  Last week I went without even using the APs, but we’ll see once my daily target starts dwindling!  I bet I dip into them for SURE then! lol

So following that I I definitely needed a post-run snack/re-fuel.  I was in a bit of a rush, so I snagged my last Amazing Grass Chocolate Whole Food Bar for 4 POINTS): 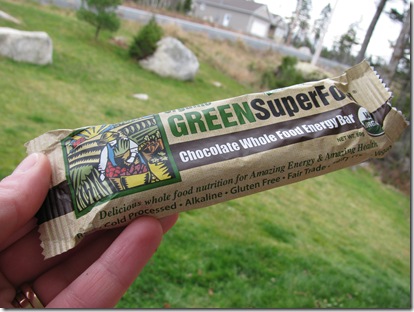 It’s the second best one of the AG bars (after the Choc PB) in my opinion.  You certainly don’t expect the green on the inside! 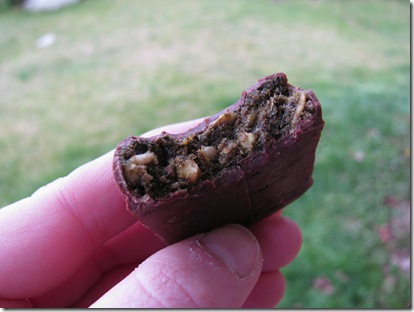 Then I hit the road to the craft fair with Amy where I scored some honeycrisp apples (3 for $2), some Garlic Balsamic Vinaigrette, some cutsie xmas oven mit things and I had already planned on nibbling on a few samples and getting some other snack or sorts so I ended up getting one of these bubbly teas that Lex talked about yesterday (coincidently!).  I had never had one before or even heard of them, but they ended up being what seemed to be the healthiest option at the fair: 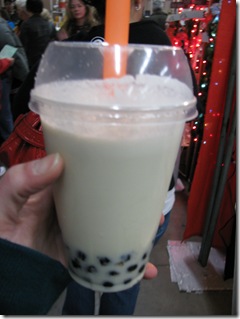 I thought those little things on the bottom where blueberries but they WEREN’T!  They were chewy things that resembled gummy bears!  What they heck where they anyway? Anyone?

They are made with green tea if that means anything?! lol  I counted it for 4 POINTS but I have no flipping idea! 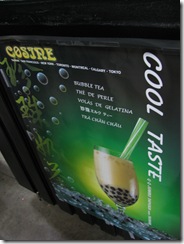 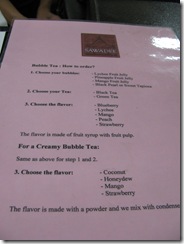 I had the coconut.  It was okay all around and the straw was big enough to suck up the little chewy things which was kind of neat, I guess?! 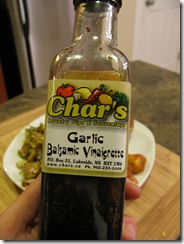 PERFECT with what I had planned for supper.  I was going to make balsamic Brussels Sprouts, so what better way to test it out!

By the time I went to the hospital, I was home late for supper so I ended up thinly slicing the brussels sprouts and sauteeing them with the vinaigrette and some shallots and S&P.  At the end I also added a splash of the “good stuff” because you cannot beat the flavour of a Williams Sonoma Aged Balsamic! 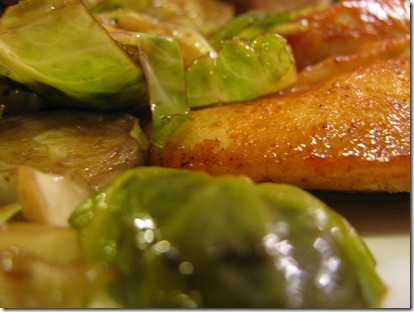 Hubby made some baked chicken breasts with BBQ Shake ‘n Bake.  I’m not really a fan, but he was in charge and it was already done, so who was I to argue! ;-)

Together with a whole wheat roll: 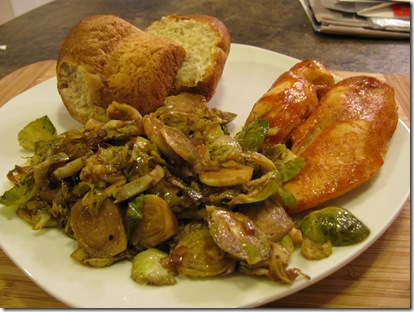 I didn’t end up eating all of the chicken and saved it for my lunch today with more brussels sprouts.

My entire day was about 30 POINTS and the only thing missing was dairy!

Today I’m making sure to get my dairy in!

Pictures of my journal to come!  Are you taking pictures of your journal and/or are you posting your menus up?  What do you think about that idea? Does it help keep you even more accountable?