It’s getting to that time of year when we look back on all that happened and decide what we liked and didn’t like and, of course, we make those lists. I polled our keen readers on staff and they were more than happy to share with me their favourite reads of 2011. As always it is an interesting and eclectic list. As always no one nominated the same book. I hope you will find something new and tempting to try.

The 4 Percent Universe: dark matter, dark energy, and the race to discover the rest of reality
by Richard Panek

“The epic, behind-the-scenes story of an astounding gap in our scientific knowledge of the cosmos. In the past few years, a handful of scientists have been in a race to explain a disturbing aspect of our universe: only 4 percent of it consists of the matter that makes up you, me, our books, and every planet, star, and galaxy. The rest–96 percent of the universe–is completely unknown. Richard Panek tells the dramatic story of how scientists reached this conclusion, and what they’re doing to find this “dark” matter and an even more bizarre substance called dark energy” – Publisher
1493: uncovering the new world that Columbus created
by Charles C. Mann

“From the author of 1491, the best-selling study of the pre-Columbian Americas, a deeply engaging new history of the most momentous biological event since the death of the dinosaurs. More than 200 million years ago, geological forces split apart the continents. Isolated from each other, the two halves of the world developed radically different suites of plants and animals. When Christopher Columbus set foot in the Americas, he ended that separation at a stroke. Driven by the economic goal of establishing trade with China, he accidentally set off an ecological convulsion as European vessels carried thousands of species to new homes across the oceans. The Columbian Exchange, as researchers call it, is the reason there are tomatoes in Italy, oranges in Florida, chocolates in Switzerland, and chili peppers in Thailand.” – Publisher
Bossypants
by Tina Fey

“Before Liz Lemon, before “Weekend Update,” before “Sarah Palin,” Tina Fey was just a young girl with a dream: a recurring stress dream that she was being chased through a local airport by her middle-school gym teacher. She also had a dream that one day she would be a comedian on TV. She has seen both these dreams come true. At last, Tina Fey’s story can be told. From her youthful days as a vicious nerd to her tour of duty on Saturday Night Live; from her passionately halfhearted pursuit of physical beauty to her life as a mother eating things off the floor; from her one-sided college romance to her nearly fatal honeymoon — from the beginning of this paragraph to this final sentence. Tina Fey reveals all, and proves what we’ve all suspected: you’re no one until someone calls you bossy.” – Publisher
Fred Herzog: photographs
by Fred Herzog, 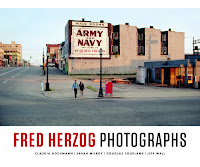 “The definitive book about the stunning oeuvre of a pioneer of colour photography — Vancouver’s Fred Herzog . For more than five decades, Fred Herzog has focused his lens on street life, and his striking colour photographs — of vacant lots, second-hand shops, neon signs and working-class people — evoke nostalgia in an older generation and inspire wide-eyed revelation in a younger one. The images that we now consider iconic once relegated Herzog to the margins: his bold use of colour was unusual in the 1950s and ’60s, a time when art photography was almost exclusively associated with black-and-white imagery.” – Publisher
Ghost Wave: the discover of the Cortes Bank and the biggest wave on earth
by Chris Dixon

“Rising from the depths of the North Pacific lies a fabled island, now submerged just 15 feet below the surface of the ocean. Rumors and warnings about Cortes Bank abound, but among big wave surfers, this legendary rock is famous for one simple (and massive) reason: this is the home of the biggest rideable wave on the face of the earth. In this dramatic work of narrative non-fiction, journalist Chris Dixon unlocks the secrets of Cortes Bank and pulls readers into the harrowing world of big wave surfing and high seas adventure above the most enigmatic and dangerous rock in the sea. The true story of this Everest of the sea will thrill anyone with an abiding curiosity of-and respect for-mother ocean.” – Publisher
In the Garden of Beasts: love, terror, and an American family in Hitler’s Berlin
by Erik Larson

“Larson offers a real-life, eyewitness perspective inside the Nazi hierarchy as Hitler came to power. William E. Dodd, a mild-mannered professor from Chicago, became the first US ambassador to Hitler’s Germany in 1933. Dodd, his wife, their son, and their 24-year-old daughter Martha lived in Germany for about five years. Drawing on Martha’s diaries and letters, much of the book centers on Martha’s romantic affairs with high-ranking Nazi officials and her eventual heroism as she realized Hitler’s true character. Meanwhile, her father William Dodd informed the US State Department of increasing Jewish persecution, with little response from the State Department. The book sheds light on why it took so long for the world to recognize the threat posed by Hitler.” – Publisher
Physics of the Future: how science will shape human destiny and our daily lives by the year 2100
by Michio Kaku

“Imagine, if you can, the world in the year 2100. In Physics of the Future , Michio Kaku-the New York Times bestselling author of Physics of the Impossible -gives us a stunning, provocative, and exhilarating vision of the coming century based on interviews with over three hundred of the world’s top scientists who are already inventing the future in their labs. The result is the most authoritative and scientifically accurate description of the revolutionary developments taking place in medicine, computers, artificial intelligence, nanotechnology, energy production, and astronautics.” – Publisher
Prophet’s Prey: my seven-year investigation into Warren Jeffs and the Fundamentalist Church of Latter-Day Saints
by Sam Brower

“Private investigator Brower gives readers a firsthand look at the investigation that brought down prophet Warren Jeffs and the cult-like Fundamentalist Church of Jesus Christ of Latter Day Saints. Brower came to the aid of an FLDS church member being kicked out of his house and stumbled into a case that would dominate the next seven years of his life. Sifting through the lies and the strictly enforced code of silence of the FLDS church, he worked with law enforcement in three states to uncover the sexual abuse of underage girls that the church practiced under the shield of the claim to religious freedom. After years of watching children abused and families destroyed, Brower had the satisfaction of seeing Jeffs behind bars, incriminated by his own words written in his diaries and captured on tape. Verdict This compelling story of one man’s crusade against a pedophile prophet will appeal to readers of current events and religious history as well as to crime fans.” – Library Journal