Share
If you haven’t had the pleasure, let me introduce you to Flavia de Luce.
She is 12 years old, a chemist in training who loves her poisons, the youngest of three sisters, and an aspiring detective.  She only aspires to being a detective because of her habit of stumbling across dead bodies.  She grew up in  Buckshaw her family’s estate in the beautiful English countryside near the village of Bishop’s Lacey.   Very recently, however, Flavia has been unceremoniously bundled up by her father and aunt and banished to Canada to attend Miss Bodycote’s Female Academy, a private finishing school in Toronto.  There she will complete her education at the same school her late mother Harriet attended.  At the end of the 6th book in the Flavia de Luce mysteryseries I feared she might be sent off to the hinterlands of the British Empire (in this case Canada) never to be heard from again.   But she is back!

In her latest adventure Flavia has arrived in Toronto at her new school and as she’s settling in she stumbles across yet another dead body.  This one falls out of her chimney, is charred, and wrapped in the Union Jack.  You can’t get a much warmer welcome than that!  It’s not long before Flavia is on the case, looking for clues, talking to suspects and students, trying to make new friends, and most of all dealing with homesickness.
If you’d like to read the others in the series check out these great titles, and I do mean great titles: 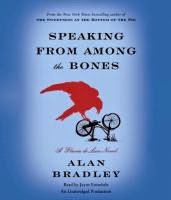