I chose to read Erik Larson’s Dead Wake: the last crossing of the Lusitania in part because I knew little about the Lusitania disaster. For those unfamiliar with it, the Lusitania was a large British ocean liner that was torpedoed by a German U-boat in May 1915 (during the First World War) while en route from New York to Liverpool.

The ship sank within eighteen minutes, with only 764 of the 1,962 people on board saved. 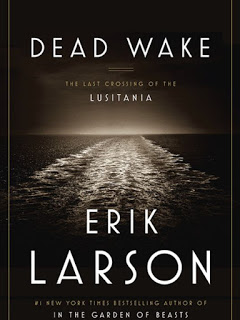 I am easily captivated by tales of disaster and tragedy in history. Maybe it’s my interest in the past mixed with the compelling nature of stories in which people are forced to confront unfathomable situations. How did people cope? What does this event tell us about that period in history—how people lived or what life looked like? How does it speak to the human condition?

Larson manages to write a richly detailed, well-researched account of this event, providing historical context through a blend of military, political, and social history in a way that will appeal to history buffs of multiple stripes. More than a collection of facts, though, this non-fiction book pleasantly surprised me with its narrative style, which quickly drew me in and sparked my imagination (much like good fiction does). The event is humanized and brought to life through vivid character descriptions and eyewitness accounts. Multiple perspectives and stories are presented—including those of passengers, crew, the British Admiralty, President Woodrow Wilson, and German U-boat commander Walther Schwieger—which impart a well-rounded understanding of the event.

Although the first half of the book is dedicated to the build-up of events prior to the sinking, suspense is sustained throughout as the author explores the significance of the chance events that ultimately contributed to the disaster. Tense and engaging, Larson’s powerful writing provides readers with a striking picture of an otherwise unimaginable event: how it occurred, how people survived, and how the Lusitania changed the course of history.

If you are looking for other books on the Lusitania disaster, here are some suggestions:

Lusitania: triumph, tragedy, and the end of the Edwardian age by Greg King and Penny Wilson is similarly detailed and engaging but contrasts Larson’s work in that it has a greater focus on the lives of passengers, particularly the wealthy and glamorous.

Exploring the Lusitania: probing the mysteries of the sinking that changed history by Robert B. Ballard presents a vivid, heavily-illustrated volume that not only discusses the history of the Lusitania and its demise but also depicts an underwater investigation of the wreckage.

Lusitania: an epic tragedy by Diana Preston is an award-winning book that offers a compelling and descriptive narrative of the human experience, political impact, and various conspiracy theories related to the disaster.