Each year, Nova Scotia comes together as a community to read the same book through One Book Nova Scotia. Past books have included Twenty-Six   by Leo McKay Jr. (2012), Fauna by Alissa York (2013), and Roost by Ali Bryan (2014).

For 2015, the chosen book is Just Beneath My Skin by Darren Greer.

This is a book of extremes, grim at times but also fanciful, with beautiful scenes of introspection and descriptions of the natural world, and then sudden extreme violence. It explores both the depths of human cruelty and the power of love. 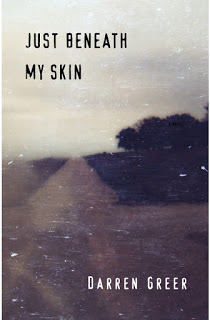 Set in the 1980s in the fictitious impoverished town of North River, Nova Scotia, the story focuses on Jake McNeil and his 8-year-old son, Nathan. Nathan is an isolated boy living with his abusive, alcoholic mother; he idolizes his largely absent father and treasures every moment they have together. His father, Jake, has overcome difficulties in his own life, including the guilt of leaving Nathan behind, but is now back and just wants to do the right thing for his son. Their search for a better life in Halifax together sends both careening into danger.

Just Beneath My Skin has an extremely quick pace, alternating between Jake and Nathan’s first-person perspectives with each short chapter (some are just a paragraph long). Later chapters have an unrelenting tension that left me anxious with a growing feeling of foreboding. The narrative also skips around in time, telling us the poignant memories Jake has of his sister, parents, and grandparents.

While the structure helps to highlight the parallels and contrasts between Jake and Nathan’s lives, unfortunately, this fast pace does short-change some of the other characters, particularly the female ones, who are portrayed as either angels or demons when a more nuanced take would have been better. The motivations of secondary characters like Jake’s resentful drug-addicted friends, too, are often frustratingly muddled.

But ultimately, I enjoyed Just Beneath My Skin due to the strong relationship between the unlikely father and son, whose connection runs so deep that they dream about each other. It seems everyone in Greer’s North River has chosen to numb the tragedies of their lives with religion, violence, or substance abuse, but Jake and Nathan are the exceptions, choosing hope for the future over despair even when it seems that the whole world is against them.

Staff Pick: Just Beneath My Skin by Darren Greer
https://haligonia.ca/staff-pick-just-beneath-my-skin-by-darren-greer-111532/