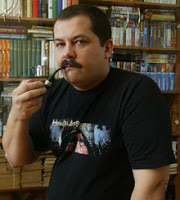 I’m finally finishing Sergei Lukyanenko’s four part series that began in 2006. While not overly popular in North America, Lukyanenko is one of Russia’s top sci-fi writers. The translation is excellent, but you can tell it was written in another language. There’s a strange poetry to the flow.

The ‘Watch’ series is set in modern day Moscow, bathed in a gritty mood and doused with inevitability. One gets a sense that post-Communist Russia is a place of expenses and desperation and corruption. This merely enhances the plot’s flavor.

In this world there are Others, people who have obtained or developed supernatural abilities. Long ago the forces of good and evil duked it out and came to a semi-peaceful middle ground. Nowadays, the ‘Watches’ police Others.

The balance must be maintained. If a Dark Other commits a crime, the Light Others are allowed to pursue justice or commit an act of equal goodness. And vice-versa, should Light Others bless someone unnecessarily.

While good and evil hold each other in a frustrating stalemate, a third party exists as arbiters; I’ve just brought home a copy of The Twilight Watch. Their Inquisition, with cold, moral greyness, is constantly seeking new recruits from the main Watches. Heroes and villains come to a head in this one, and I can’t wait.

Because lastly comes The Last Watch. Until now, these novelettes have been set in Moscow. The Eastern battle for harmony is about to enter the West.