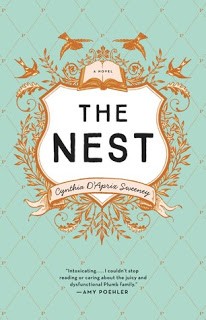 Sometimes I love picking up a book just because everyone is talking about it and it has BUZZ!  This first novel  was not something I would normally have picked up but a certain CEO of a Canadian bookstore chain “picked it” so I thought I’d see what the fuss is about.  I wasn’t disappointed with the story and as the twists and turns of the family unraveled I couldn’t put the book down.  I can’t say that I loved any of the siblings particularly but their partners were great and their characters more than made up for the shortcomings of the four Plumbs.   Here is a brief summary from the publisher:
“Every family has its problems. But even among the most troubled, the Plumb family stands out as spectacularly dysfunctional. Years of simmering tensions finally reach a breaking point on an unseasonably cold afternoon in New York City as Melody, Beatrice, and Jack Plumb gather to confront their charismatic and reckless older brother, Leo, freshly released from rehab. Months earlier, an inebriated Leo got behind the wheel of a car with a nineteen-year-old waitress as his passenger. The ensuing accident has endangered the Plumbs’ joint trust fund, ‘The Nest,’ which they are months away from finally receiving. Meant by their deceased father to be a modest mid-life supplement, the Plumb siblings have watched The Nest’s value soar along with the stock market and have been counting on the money to solve a number of self-inflicted problems. Melody, a wife and mother in an upscale suburb, has an unwieldy mortgage and looming college tuition for her twin teenage daughters. Jack, an antiques dealer, has secretly borrowed against the beach cottage he shares with his husband, Walker, to keep his store open. And Bea, a once-promising short-story writer, just can’t seem to finish her overdue novel. Can Leo rescue his siblings and, by extension, the people they love? Or will everyone need to reimagine the futures they’ve envisioned?