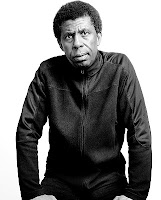 Dany Laferriere, a writer, has spent 30 years in Montreal , an exile from his native Haiti. His father, also an exile in New York, has died and it falls to Dany to return his ashes to his native land. Dany has spent a lifetime away from his father, having first been separated from him as a small boy and left with very few memories. Dany’s mother elected to remain in Haiti, despite the struggle, to give her children their heritage and a homeland. It’s an unnerving experience to see his country and his family, especially his mother, after a three decade long absence. Dany is left with the feeling of not truly belonging in his birth or in his adopted country.

The Return (M) by Dany Laferriere is an autobiographical novel written in verse. The language is sparse and aims right to the heart of the matter. The combination of prose and poetry blends together quite naturally. Dany describes the harsh reality of daily life in Haiti.Yet, despite the hunger and the intimidation, we see small expressions of hope in defiance of dictatorship, which involve small gestures like buying books and budgeting for weekly pastimes. The Return is a story of exile, an exploration of father-son and mother-son relationships, and the search for identity. The dual nature of Dany’s life leads naturally to contrasts – Haiti with Montreal, heat versus coldness, and hunger versus fullness.
The Return won the Prix Medicis and the Grand Prix du livre de Montreal and was longlisted for the 2011 Giller Prize.

Autobiographical fiction is an interesting genre, especially when the author uses his own name. Other writers, like Andrea Levy, elect to rename their characters which seems to put a little distance between them and the story. Levy’s Every Light in the House is Burnin’ (M) is another example of autobiographical fiction that looks at the experience of a Jamaican immigrant in London. “Better opportunity’ that’s why Angela’s dad sailed to England from America in 1948 on the Empire Windrush. Six months later her mum joined him in his one room in Earl’s Court. Twenty years and four children later, Mr Jacob has become seriously ill and starts to move unsteadily through the care of the National Health Service. As Angela, his youngest, tries to help her mother through this ordeal, she finds herself reliving her childhood years, spent on a council estate in Highbury.” – Discover